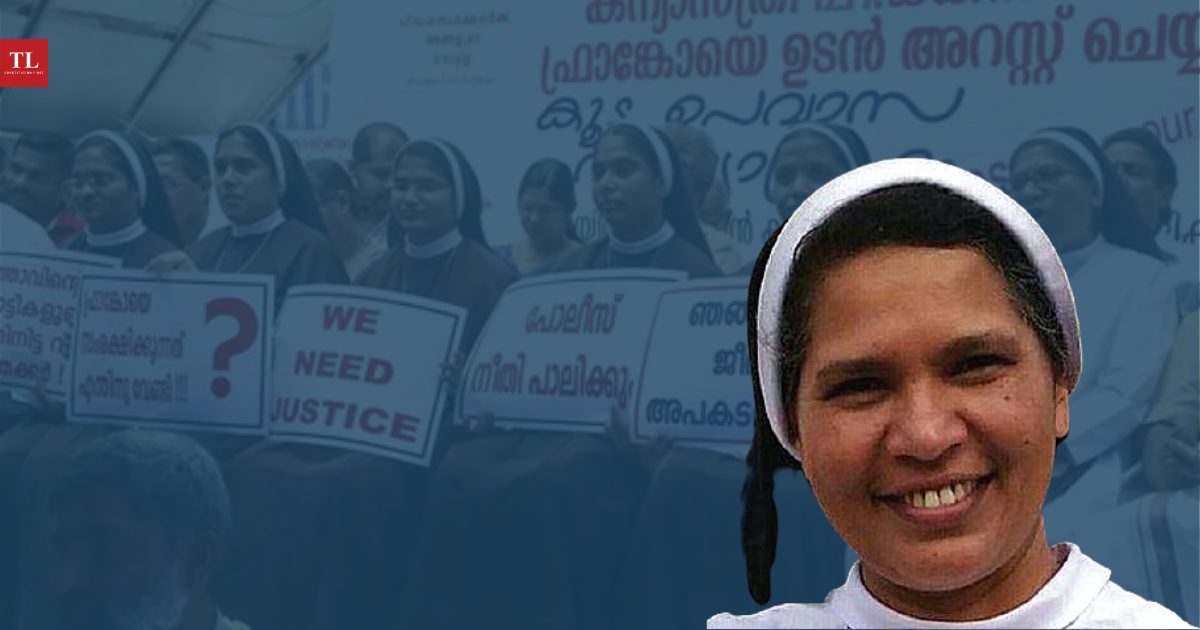 Sister Lucy Kalapurackal, Kerala’s rebel Catholic nun who took part in a public agitation of nuns demanding the arrest of Bishop Franco Mullakkal who was accused of raping a nun, has been asked to vacate her convent. She has been accused of violation of the vow of obedience by protesting against the Bishop. In an exclusive interview with The Leaflet, Sister Lucy tells REJIMON KUTTAPPAN that she won’t quit and will fight till justice is done.

“Let them give up their cassock. I haven’t sinned. What I did was I stood with the abused nuns and talked against their abuser. Neither I am not going to accept their dismissal order nor give up my cassock. I will be the bride of Christ to the grave. I am not going to leave this convent…”

These were the words of Sister Lucy Kalapurackal, a 56-year-old Keralite nun from Syro-Malabar Franciscan Clarist Congregation (FCC), who has been ‘ordered’ by the Congregation Superior General Sr Ann Joseph in Kerala to leave the Karakkamala Convent in Wayanad.

Sr Lucy was dismissed from the FCC in May 2019 for being at the forefront of protests against rape-accused Syro Malabar Catholic Church Bishop Franco Mulakkal in 2018, which had irked FCC.

In June 2018, a nun in Kerala had accused Mulakkal of rape and a complaint was filed with the Kerala police under Section 164 of the Code of Criminal Procedure.

The nun had alleged that she was raped by Mulakkal 13 times between 2014 and 2016 during his visits to the nun’s convent in the Kottayam district in Kerala. Three more women also accused Mulakkal of sexual misconduct against them.

In September 2018, Mulakkal was arrested, however, he was granted bail. The case is being heard.

The nuns abused by Mulakkal had openly staged a series of protests in Kochi and Sr Lucy was in the forefront, which had resulted in her dismissal.

Joining the protest in Kochi, she had said that the Church should be prepared to correct itself if any lapses had occurred, and expressed her unwavering support to the nuns seeking justice in the rape case.

Following the dismissal, Sr Lucy had approached the Indian court and also the Vatican Court in Rome, which follows the Catholic Church Canon law.

While Sr Lucy’s case is still being heard in the Kerala High Court, the Supreme Tribunal of the Apostolic Signatura, the highest canonical tribunal, had reportedly issued a final verdict this May 2021 rejecting her revision petition on dismissal.

Following the ‘closure’ of the petition, the FCC has issued an Order on June 13 to Sr Lucy to vacate the convent.

The Order sent by the FCC ( in possession with The Leaflet) addressed to Sr Lucy reads, “There is no further legal remedy available to you to within the Catholic legal system to challenge your dismissal… Now onwards it is unlawful for you to continue to stay in any of the Franciscan Clarist Convents.”

The Order details that as the Supreme Tribunal of Signatura Apostolica (Vatican Court) has definitively rejected Sr Lucy’s  Revision Petition, and as there is no further appeal possible within the legal system of the Catholic Church, now onwards it is unlawful for her to continue to stay in any of the Franciscan Clarist Convents.

“As per the Proper Law of the FCC, we cannot permit any non-member to live in our convents. There are only two exceptions possible: (1) our workers can be permitted in the quarters demarcated for them; (2) in our guest rooms attached to our houses, if any, our guests can be permitted to stay for a while. You are no more a member of FCC, and you are not one of our guests and you are not on the list of our workers. And that means you have no right anymore to continue to stay in any of our convents,” the Order reads.

The Order gave a deadline of one week for Sr Lucy to vacate the convent.

“I hereby order you to vacate the convent, after having handed over to the Local Superior of that community the FCC religious habits that you possess and anything else that belongs to the FCC but in your possession now, within one week, from the receipt of this letter,” the Order read.

However, talking to The Leaflet, Sr Lucy said that “she is not going to quit the fight.”

“I have contacted my lawyer in the Vatican. She is unaware of the fresh developments. What does this mean? I doubt the Vatican Court verdict. My lawyer has asked me for a weeks time. I will wait for her. Let us see… I am not going to quit even if they torture me here,” Sr Lucy said.

Sr Lucy alleged that the moment she started to speak against Mulakkal, she has been seen as an outcast in the convent.

“Since the beginning of 2019, the other nuns in the convent stopped talking to me. I used to greet them. But they would not return the greeting. They closed down the common kitchen and opened a new one where I don’t get entry,” Sr Lucy said.

“They stopped me from using the common kitchen utensils. So, I bought a few and I started to cook myself. They would cut the power supply to my room. I would sit in the dark and pray. Now, they have even closed the corridor. I have only a side door to go out and come in. It’s a jail for me. But I know that Jesus Christ is with me,” Sr Lucy said.

Sr Lucy belongs to the Mananthavady diocese, Wayanad, and has been in service since 1985. Additionally, she is also a school teacher since 1997. This year in March, she retired.

“I have been giving all my savings to the monastery. It’s the rule. But when I need something, they make us beg. Isn’t it weird that they were issuing a warning letter because I bought a small car,”  she asked?

In September 2018, Sr Lucy was even reportedly banned from prayer, teaching the Bible, attending worship service, and other activities of the parish, including offering holy communion, after she extended her support to the protesting nuns in Kochi.

At that time, believers in the church protested the ‘ousting’ of Sr Lucy.

So, the authorities of St Mary’s Church at Karakkamala in Kerala’s Wayanad district withdrew the disciplinary action taken against her.

She told The Leaflet: “I will fight as long as justice is delivered.”

Meanwhile, retired Karnataka High Court Judge Michael Francis Saldanha has sent a letter ( in possession with The Leaflet) to the FCC stating that the Order issued to vacate Sr Lucy from the convent is a matter of national shame.

In his letter, Justice Saldanha said, “She is a nun, where will she go if you throw her out of the convent. Will she go to the footpath?”

He has urged the FCC to desist from any coercive steps detailing that they will only constitute aggravation of the offence and invite severe action from the judiciary.

Justice Saldanha has asserted the fact in his letter that “India is a sovereign country despite which the Catholic Church has been taking up the stand that they are subordinate to no authority in India, civil or criminal, that the laws of the land do not apply and that they owe allegiance only to the Vatican.”

In his letter, Saldanha said: “It is well-settled law that this is an unsustainable plea. Sr Lucy’s case is sub-judice. Mulakkal has tried every possible avenue from the High Court to the Supreme Court to have that case quashed, which have failed and he has been ordered to stand trial, even then every conceivable trick has been taken to protract that procedure,  but the Judiciary of this country will ensure that justice is done.”

He has also urged the FCC to respond to his letter in 10 days or else to face legal consequences.

(Rejimon Kuttappan is a migrant rights researcher, multi-media journalist, and author based in Thiruvananthapuram.)