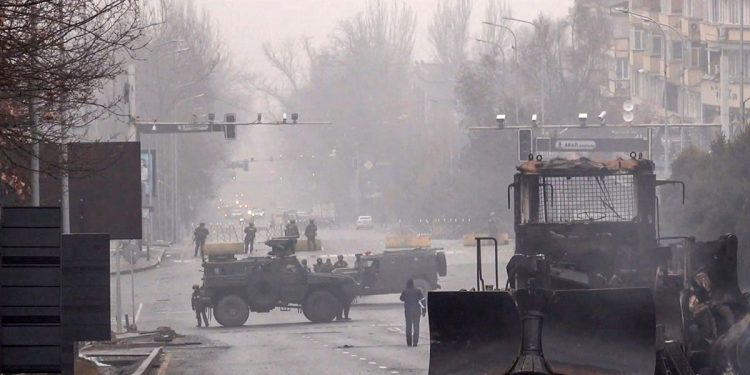 Kazakhstan Crisis: Has International Human Rights Law anything to offer?

Human rights issues are amongst the series of crises plaguing the central Asian regions of Kyrgyzstan, Belarus, and Armenia. The ground reality can be dubbed as self-contradictory despite Kazakhstan’s attempts to create a pro-human rights narrative by signing human rights treaties or incorporating full-bodied domestic mechanisms, writes ATUL ALEXANDER.

Kazakhstan is known for its thriving economy in the past decades. The recent spike in the price of Liquified Petroleum Gas (LPG) and a series of other measures by President Kasym Jomart Tokaev, including the failure to bring constructive human rights reforms, forced the people of Kazakhstan to take to the streets.
The crisis prompted the UN High Commissioner, Michelle Bachelet, to urge the security personnel, protesters, and others to seek a peaceful resolution. The interior minister of Kazakhstan confirmed that the protest claimed the lives of 12 law enforcement officers. Moreover, it is now a known fact that the police used tear gas, flashbang grenades against the protesters; in retaliation, the protesters ransacked the Government institutions.
A state of emergency has been declared in Kazakhstan with Russia intervening to quell the situation under the Collective Security Treaty Organisation (CSTO). This terse write-up does not comprehensively examine the legitimacy of Russia’s intervention under the CSTO pact; instead, analyses the application of human rights vis-à-vis Kazakhstan.

The human rights track record of Kazakhstan has hit an all-time low, with Government critics, including the opposition party members suppressed and jailed. As highlighted by the Human Rights Watch, “Authorities continue to target perceived or actual supporters of the banned Democratic Choice of Kazakhstan (DVK).” Several international actors like the United Nations Human Rights Council (UNHRC) have urged Kazakhstan to amend their restrictive laws on the freedom of expression and criminalise violence against women and children.

As per the UN Treaty Database, out of 14 core human rights treaties, Kazakhstan has ratified 11.

The recent policy change like the ratification of the Second Optional Protocol to the International Covenant on Civil and Political Rights, 1989 to abolish capital punishment, has been praised by the likes of the European Union (EU). As captured by the UN Treaty Database, out of 14 core human rights treaties, Kazakhstan has a nifty track record of ratifying eleven.

Moreover, the Universal Periodic Review (UPR, 2018) of Kazakhstan, for instance, states in the context of protection against torture, “More than 2,500 preventive visits have been conducted to-date: 277 visits (14 unscheduled) in 2014, 528 visits (20 unscheduled) in 2015, 680 visits (14 unscheduled) in 2016, 534 visits (24 unscheduled) in 2017, and 461 visits (27unscheduled) in 2018.”
Also Read: Decolonizing the international law on genocide
However, the reforms indicated are yet to translate into ground realities. The Special Rapporteur on counter-terrorism and human rights, Fionnuala Ní Aoláin, carried out an official visit to Kazakhstan in May 2019, including regions of Aktau and Almaty where the protests emerged. According to her, Kazakhstan’s overly broad use of the word ‘terrorism’ in this context against protesters, civil society activists, human rights defenders, journalists, and political parties aimed at instilling fear was deeply concerning. Her comments were echoed by several other experts appointed by the UNHRC.

On the domestic front, however, the president in May 2020 signed a new law on public assemblies that fell below the international standards. It openly discriminated against unregistered organisations and non-citizens. As pointed out by researcher Laura Mills, “The Bill still gives the authorities power to approve or reject requests to hold events depending on their form. Government officials can propose alternative locations, times, and dates. If the organisers do not consent to the change, the event will be canceled. None of this complies with international norms for respecting freedom of assembly.”
Further, the law mentioned above contravenes Article 21 of the International Covenant on Civil and Political Rights (ICCPR) 1966 vis-à-vis General Comment (G.C) 37. As spelled out in G.C 37, “States must not deal with assemblies in a discriminatory manner, for example on the basis of nationality, race, ethnicity, age, political opinion, religion, belief, minority status, disability, sexual orientation or gender identity. Particular efforts should be made to ensure equal and effective protection of the right of peaceful assembly of individuals who are members of groups who are or have been subjected to discrimination. This includes the duty to protect participants from homophobic, sexual or gender-based attacks.”
As Kazakhstan is a signatory to the ICCPR and its Optional Protocol (OP) 1, which clearly mentions that persons subject to the jurisdiction of the State party for the violations of human rights can approach the Human Rights Committee through an individual complaint mechanism. The Human Rights Committee has an antecedent of providing effective remedies to individuals for the case brought against Kazakhstan.

In a communication brought by Kanat Ibragimov (represented by counsel, Bakhytzhan Toregozhina) against Kazakhstan, the Human Rights Committee observed, “…the State party is under an obligation to provide the author with an effective remedy. This requires it to make full reparation to individuals whose Covenant rights have been violated. Accordingly, the State party is obligated, inter alia, to take appropriate steps to provide the author with adequate compensation and reimbursement of any legal costs incurred by him.” As clear from UN Treaty Body Database, there are more than 50 individual complaints against Kazakhstan, which unequivocally points towards the sorry state of human rights in Kazakhstan.

Alongside the strict measures to clamp down on ‘freedom of Assembly’, torture and ill-treatment are widespread; for instance, on October 17, Azamat Orazaly, accused of stealing livestock, died in the police custody of the East Kazak region on the allegation of torture.
As claimed by Kazakhstan in its fourth periodic report of the Convention against Torture and Other Cruel, Inhuman or Degrading Treatment or Punishment pursuant to the optional reporting procedure, “The Government is currently pursuing further legislative reforms, including: (1) legislation to ensure prompt access to a lawyer for accused persons; and (2) a prohibition on summoning a suspect to a police station more than once without justification.” This undertaking of Kazakhstan is yet to translate into ground realities.
Also Read: International Law Omissions in Rohingya Deportation Order
The imposition of emergency in the backdrop of the January protests does not mean that the Government can go all out violating human rights. As clear from Article 4 (1) and (2) of ICCPR, which reads as:
Article 4(1)- “In time of public emergency which threatens the life of the nation and the existence of which is officially proclaimed, the States Parties to the present Covenant may take measures derogating from their obligations under the present Covenant to the extent strictly required by the exigencies of the situation, provided that such measures are not inconsistent with their other obligations under international law and do not involve discrimination solely on the ground of race, colour, sex, language, religion or social origin.”
Article 4(2)- “No derogation from articles 6, 7, 8 (paragraphs I and 2), 11, 15, 16 and 18 may be made under this provision.”
The provision makes it apparent that the ‘Right to life’ under Article 6 of ICCPR cannot be derogated from, even during a public emergency. However, the arbitrary deprivation of life in Kazakhstan seems to be endless, and targeting specific groups (namely, LGBTQ+, children, and persons with disability) is rampant, which has been flagged by human rights agencies.
Under the Constitution of Kazakhstan, the president is conferred with the power to declare an emergency. Article 44 (16) of the Constitution states, “…take measures dictated by the above circumstances including the imposition of a state of emergency on the entire territory and in particular areas of Kazakhstan.”
During an ‘emergency’, while States can legitimately suspend human rights, it ought to be in line with ‘due process’ and limits. The Siracusa Principles lay down these limits, (a) responding to a pressing public or social need; (b) pursuing a legitimate aim, and (c) is proportionate to that aim. Moreover, the burden is upon the State imposing emergency to show that it is legitimate.
Meanwhile, Russia has deployed more than 2,500 troops in Kazakhstan, and Putin’s readiness to use force can signal a dead-knell to human rights protection in Kazakhstan. Russia’s justification for intervention stems from Article 4 of the CSTO after Tokaney alleged that the protest is fueled by foreign ‘terrorists’. CSTO provides a ‘victim state’ all necessary assistance, including military assistance and any other means available to them in accordance with Article 51 of the UN Charter.

The Special Rapporteur on counter-terrorism and human rights has raised concerns over Kazakhstan’s broad use of the word ‘terrorism’ against protesters, civil society activists, human rights defenders, journalists, and political parties.

However, according to the report of the institut de droit international on ‘Present Problems of the Use of Force in International Law’, the objective of military assistance is to assist the requesting State in its struggle against non-state actors or individual persons within its territory, with full respect for human rights and fundamental freedoms. Therefore, Russia is obliged to respect the human rights of the protesters to the fullest extent and cannot be complicit in human rights breaches.
The present crisis is an outcome of pent-up anger against the corrupt Government and poor governance. Human rights issues are amongst the series of crises plaguing the central Asian regions of Kyrgyzstan, Belarus, and Armenia. The ground reality can be dubbed as self-contradictory despite Kazakhstan’s attempts to create a pro-human rights narrative by signing human rights treaties or incorporating full-bodied domestic mechanisms.
(Atul Alexander is Assistant Professor of Law at WBNUJS, Kolkata. The views expressed are personal.)