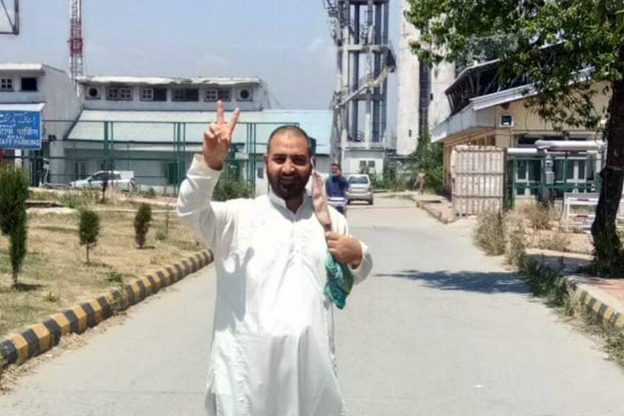 Photo Credit: Financial Express
Democracy and Rule of LawLife and LibertyRule of Law

Kashmir man arrested in Gujarat under UAPA released after 11 years

Sangam·July 2, 2021
Home
Due Process
Democracy and Rule of Law

BASHIR Ahmad Baba was released on Wednesday by the Surat District Court, acquitting him of all terror charges. The release comes after 11 years of detention by the Gujarat Anti-Terror Squad (ATS).

The 44-year old Srinagar resident was arrested in March 2010 in Anand for allegedly working for Hizbul Mujahideen, a Pakistan-based terror organisation. According to the ATS, he was tasked to recce and recruit young Muslims angry over the 2002 Gujarat Riots. He was accused of being in contact with Syed Salahuddin, the chief of the terror outfit over phone and email.

Smeared as a bomb expert, Bashir was nicknamed “Pepsi Bomber” by a section of local media, for allegedly making bombs with soft drink cans. According to police sources, he had made and used such bombs to attack the Jammu and Kashmir police during the Amarnath land row in 2008.

G.K Pillai, then the Union Home Secretary had described the arrest as a “major success” and claimed to have busted another module of Hizbul.

Bashir had maintained his visit to Gujarat for two weeks was for training in post-cancer care to provide similar treatment under the Kimaya Foundation in the Kashmir Valley. He was arrested along with his colleague from his hostel on the seventh day of his stay.

“I was given an address (of the hostel) by my organisation. Upon reaching the railway station I showed the address to the auto driver who dropped me there. Six days later the ATS came banging on my door,” Ahmad said.

“I didn’t even know about my crime. It was many weeks later that I came to know what I was being accused of, or the nickname. It was extremely disheartening,” he further said.

His non-Kashmiri colleague was later released by the anti-terror force. He claimed to have been interrogated and thrashed for the next two weeks. After keeping him in custody for two weeks, the ATS announced his arrest and booked him under the stringent Unlawful Activities Prevention Act (UAPA). He was later sent to Vadodara Central Jail by court.

Also Read: Under UAPA, anything can be an offence based on flimsy evidence

While in jail, Bashir never lost hope and earned three Master’s degreess in Politics, Public Administration, and Intellectual Property. Meanwhile, his father, unfortunately, passed away due to cancer in 2017.

“How do I describe how I felt? It was a moment of immense joy and sadness simultaneously.” “I knew I was innocent and that’s why I never lost hope. I knew I would be released honourably one day.” he said.

The Session Judge presiding over the case said, “The charge against the accused that he stayed back in Gujarat and was found in Anand on March 13 and that he had received financial aid in order to set up a terror network in Gujarat has not been proven sufficiently, nor has there been any evidence presented to prove that he received such benefits or set up a terror module. The prosecution has clearly failed to prove the allegation against the accused. The prosecution has also failed to establish any evidence to prove that he was in touch with the wanted Hizbul Mujahideen commanders.”

In each of the cases, the prosecution couldn’t provide sufficient evidence against the accused.