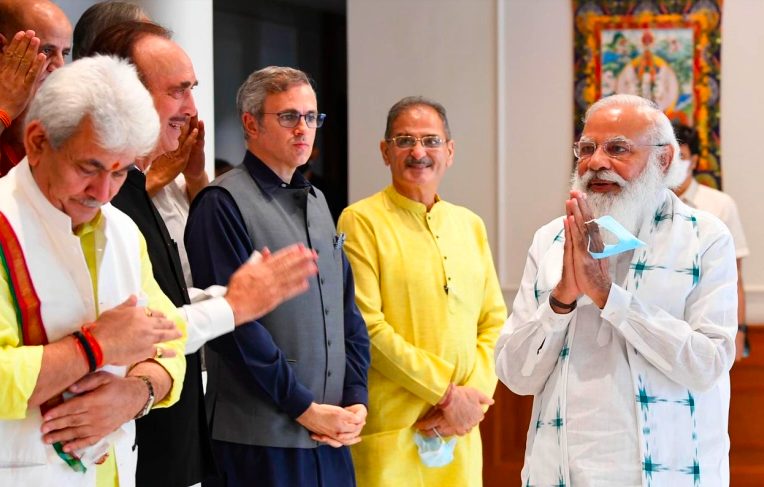 Kashmir: If Delhi is Far, Meeting of Minds Farther Still

Against the backdrop of the Prime Minister meeting with Kashmiri leaders, a campaign to polarise Kashmiri Muslims from the Sikhs is on. Politics over identity and sensitive issues such as inter-faith marriage must not be allowed to mingle, writes RAJA MUZAFFAR BHAT from Srinagar.

ON Monday, the Peoples Alliance for Gupkar Declaration, an amalgam of Kashmir-based mainstream political parties, said that it is disappointed with the outcome of the all-party meeting held by Prime Minister Narendra Modi on 24 June in New Delhi.

In a joint statement, the leaders of the National Conference, Peoples Democratic Party and other groups said the government of India has not realistically approached resolving the problems of the region and its people. The PAGD has also demanded Assembly elections in Jammu and Kashmir only after its statehood gets restored.

“All the members of the PAGD expressed their disappointment at the outcome of the Delhi meeting, especially the absence of any substantial Confidence Building Measures such as releasing political and other prisoners from jails and taking concrete steps to end the siege and atmosphere of suppression that has choked Jammu and Kashmir since 2019.

Also read: June 24 Meeting Has Only Widened Gulf Between Delhi and J&k People

“This would have initiated the much-needed process of reaching out to the people of Jammu and Kashmir, who are the biggest stakeholders and sufferers of the Jammu and Kashmir problem,” reads the statement.

When Prime Minister Modi called 14 high-profile political leaders of Jammu and Kashmir to the meeting, the assumption was that the BJP-led central government was serious about restoring democracy and institutions in Jammu and Kashmir.

Presumably, no clear direction had gone to the Jammu and Kashmir unit of the BJP to refrain from such statements. Ironically, Raina was also part of the 14-member delegation who met with the Prime Minister and Home Minister Amit Shah.

While addressing Sikhs at the Jammu office of the BJP, Raina reportedly alleged that Sikh women in Kashmir are being married to Muslims forcibly. He reportedly said these marriages are part of a deep-rooted conspiracy. Picking up on a recent interfaith wedding, he alleged that Manmeet Kaur, an 18-year-old, was married to a 60-year-old Kashmiri Muslim man.

BJP leader Raina’s allegation is false, as official records show that Manmeet is 19 and married 29-year-old Shahid Bhat from Srinagar. His entire conversation has been video-recorded and has gone viral on social media. In it, he projects himself as a saviour of the Sikhs against the Muslims.

He says, “…we cannot remain silent when conversions are taking place at gunpoint. An 18-year-old girl is married to a 60-year-old man. This is a conspiracy and we cannot tolerate this. We are always with you (Sikhs). You are a nationalist people…This is not only a conspiracy against Sikhs but against the whole country. All the girls married to Muslims have to be given back”. He also raised Sikh religious slogans at the venue.

What are the facts?

There is not a shred of evidence that any Sikh girl or woman has been forcibly converted “at gunpoint” in Kashmir. For almost three years, Jammu and Kashmir are directly under central rule. If there were instances of “forcible conversion” and “modules” running such operations, would not the authorities have found some evidence of it?

Even during the 1990s, when militancy was at its peak in Kashmir, there were no instances of Hindu or Sikh families being forcibly converted to Islam. By mocking and ridiculing Kashmiri Muslims, BJP leaders are creating communal tensions in Jammu and Kashmir. This can become a source of great mistrust, especially among the Sikh and Muslim residents of the valley.

After addressing the delegation of Sikhs, Raina spoke to reporters, who were already waiting outside the Jammu office of the BJP. Raina said forcible conversions are taking place in Kashmir at gunpoint. He claimed that eleven Sikh women have been forcibly converted to Islam in the last few months in Kashmir.

Further, he said, “…a conspiracy is being hatched to ensure Sikhs are thrown out of Kashmir. Sikhs are nationalist people. Sikh youth, men, and women have always respected the national flag and have given blood for Mother India… This is a conspiracy against Bharat Mata and our national flag. In the 1990s, Kashmiri pandits were thrown out of the valley, now there is a plan to throw out Sikhs… We warn people who are involved in these conspiracies to stop otherwise they will be taken to task.”

Fact is, Shahid’s family opposed his marriage to Manmeet. When the police produced her before the judicial magistrate in Srinagar, she testified that she is married to Shahid. (Her audio and video clips are testimony to it). One fails to understand how she got handed over to her father despite this and why Shahid got into police custody, charged with kidnapping. It is even more shocking that Manmeet has married again, a Sikh man this time, although she is not divorced.

The sequence of events indicates that Manmeet and Shahid were in love and married through a Nikah. To participate in this Muslim religious ceremony, she has to be a Muslim. Typically, in interfaith marriages, it is the man who gets the female partner to convert. Therefore, everything about this case indicates that it was simply a love marriage and that the BJP leaders sought to give it a communal colour.

Many Kashmiri Muslim women have married non-Muslims too. Those instances never get attributed to forcible conversions, etc. Sikh men have also married Hindu women in Delhi, Chandigarh and other places. Or Sikh men have married Hindu or Jain women. These cases never get raked up, but when a Kashmiri or Muslim is involved, everybody—especially a section of the media—wants political mileage or TRPs from the incident.

It is to gain the sympathy of Sikhs—by isolating them and the Kashmiri Muslims from each other—that Raina played communal politics along with the Akali Dal leader Manjinder Singh Sirsa, who travelled from Delhi to Srinagar to rake up the issue of this wedding.

Sirsa, who heads the Delhi Sikh Gurdwara Management Committee (DSGMC), has alleged that four Sikh girls were forcibly converted in the last four months in Kashmir. He demanded an anti-conversion law in Jammu and Kashmir. He is the one behind Manmeet’s remarriage, after which she was flown to Delhi. He received her at the airport and took her and her “new husband” to the Gurudwara Bangla Sahib. All this was done to gain political mileage because of the upcoming Delhi Gurudwara Committee elections.

Those who promote enmity between different social groups on grounds of religion, race, place of birth, residence, or language are supposed to be booked under section 153A of the Indian Penal Code (IPC). In Kashmir, the police recently booked a civil society actor, Sajad Rashid, under this section in Ganderbal.

During a public meeting, Sajad Rashid had told Baseer Ahmed Khan, adviser to Lt. Governor Manoj Sinha, “I have expectations of you because you are a Kashmiri and can understand. And I can catch hold of your collar and can seek answers from you, but what expectations can I have from non-state officers?”

The local District Magistrate, a 2014 batch IAS officer, was accompanying Khan and heard the remark, too. While Khan did not get annoyed at all, knowing the psyche of the locals, but the District Magistrate left the meeting, infuriated. She got Sajad Rashid booked under section 153-A.

On the other hand, no action has been taken against Sirsa or Raina, who hurt Kashmiri Muslim sentiments and distorted facts. A false narrative has been created across the country that Kashmiri Muslims are forcibly converting Sikhs to Islam in the Valley.

Kashmiris do not want to be demonised and ridiculed daily, nor do they wish to be used by politicians such as Sirsa or Raina. Such acts will not bring peace to Kashmir. Or remove Dilli ki Doori or Dil ki Doori.