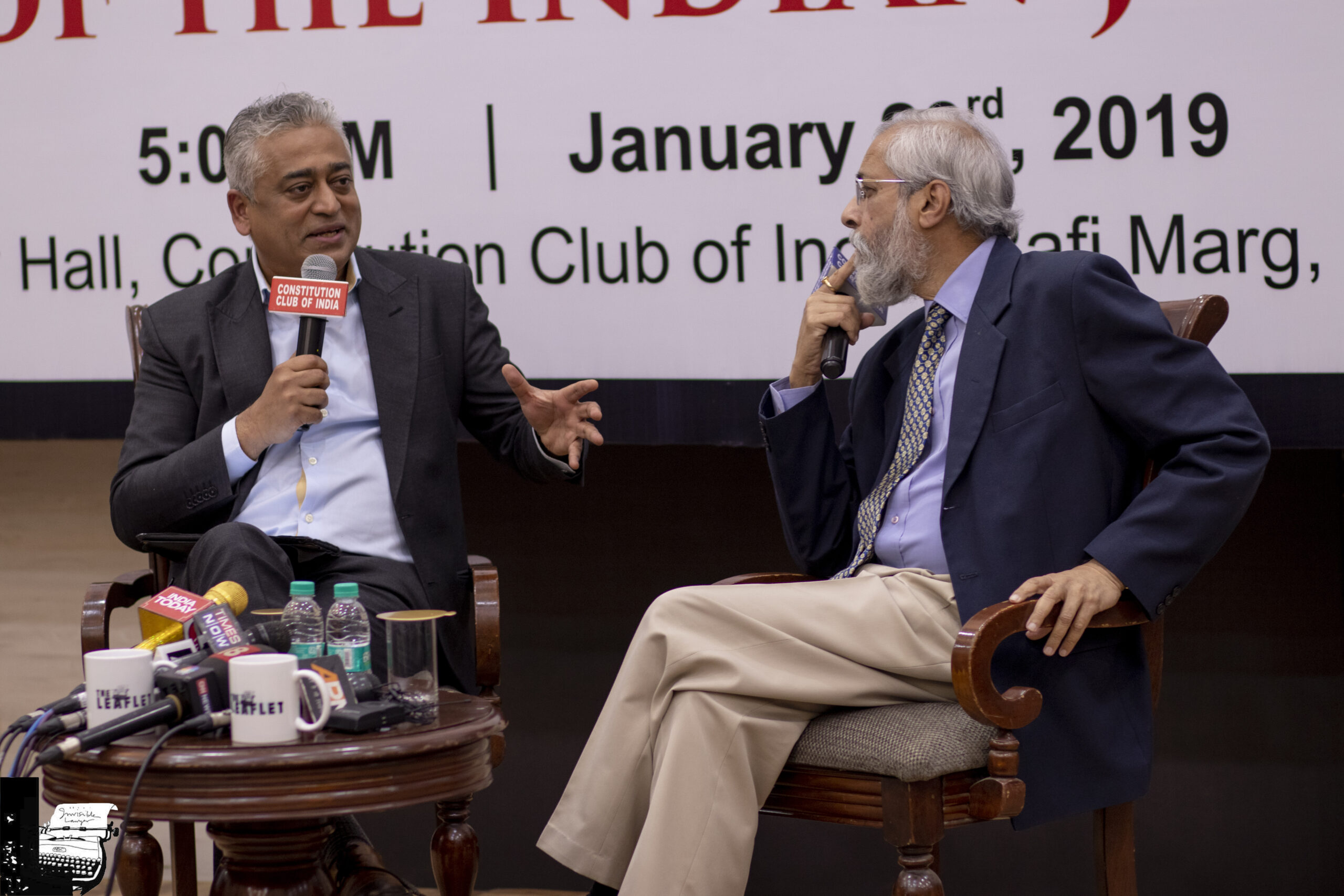 Justice Madan B Lokur (Retd.) in conversation with Rajdeep Sardesai at The Leaflet’s ‘State of the Indian Judiciary’ programme on January 23, 2019

[dropcap]O[/dropcap]N January 23, 2019, The Leaflet organised an open access event with former Supreme Court judge, Justice Madan B Lokur who was in conversation with senior journalist Rajdeep Sardesai. The programme was held at the Constitution Club of India, in the heart of the national capital.

While Senior Advocate Indira Jaising gave her welcome speech calling Justice Lokur a “People’s Judge”, the many lawyers, journalists, students and members of the civil society, public intellectuals and activists had a field’s day engaging in a free and frank conversation with one of the most respected judges of the Supreme Court, who was also known as the “social justice judge” because of his legal aid push and last mile supervision of substantive orders.

The Leaflet brings you the highlights from the thought-provoking and challenging conversation centering on many a hot-button/controversial topic, as well as on systemic malaises weakening the judiciary from within.

Breaking his silence on the fiasco of the change in the decision of the Supreme Court Collegium on non-elevation of Justice Pradeep Nandrajog and Justice Rajendra Menon to the Supreme Court, Justice Lokur said he did not suspect any motive of the Chief Justice of India wanting to “get rid of him” in order to change the decision. However, he emphasised and said: “Once a resolution is passed, it is uploaded on the website. It disappoints me that it (the Collegium’s decision of December 12, 2018) was not put on the website.” He further said, “But why it wasn’t put up, I don’t know”, and added: “I did not question any motive nor did I seek any explanation. It is not my job.”

Speaking about the current Collegium system, Justice Lokur said that the system may need “tweaking”, but it hasn’t failed. He stated, “I don’t think the system has failed. We’re dealing with human beings; we’re not dealing with machines. Certain things in the system may need tweaking but it’s not a failure”. Supporting the Collegium system, he added, “In the existing circumstances, it was the best system. But it needs tweaking”.

Rejecting the allegation of nepotism in the judiciary, Justice Lokur clarified that there are healthy discussions between the members, and that agreements and disagreements are part of it. Justice Lokur said, “There are discussions. I don’t think there is nepotism or ‘shifarish’ or influence peddling. It is like this – if there is a suggestion given by the Chief Justice that – ‘I think this person should be appointed or transferred’. We discuss it. There is a discussion even if the Chief Justice of India has views. It is a healthy discussion and there are agreements and disagreements”.

Reacting to the question of whether Chief Justice of India has too much primacy, Justice Lokur said, “The Chief Justice of India is the first amongst equals. He initiates discussion. As one of the equals, I can disagree with him. There is no forced agreement”. Keeping the trust and confidence of his brother judges, he said “What happens within the Collegium is in confidence and if I discuss it with you, it is in breach of that confidence. I won’t betray anybody’s trust. It’s a matter of trust and confidence. I won’t do that”.

Yesterday at the Constitution Club. Justice Madan Lokur interaction with @sardesairajdeep. Also present was @pbhushan1 @IJaising and team @TheLeaflet_in among others. The hall was full which is telling of the times. pic.twitter.com/SEWTKRIYPf

Justice Lokur suggested that there should be certain eligibility criteria in the selection of judges. He recalled that suggestions were invited from everybody to fuel the formulation of the NJAC judgment. He mentioned that almost 11,000 pages of suggestions were collected from the public which were then given to the Additional Solicitor General and senior advocates to analyse. Justice Lokur said, “It was a huge task to analyse. We were told by the Additional Solicitor General that Government and the Ministry of Law and Justice should come out with a Memorandum of Procedure”.

Rajdeep Sardesai to Justice Lokur: CJI Gogoi seems to be stumbling from one controvery to another – is that the nature of office? @sardesairajdeep @ pic.twitter.com/08gMQ4TcLg

Government and appointment of Judges

“What do you do when the government sits on a file for months together?” Lokur asked, referring to the controversy over the elevation of Justice KM Joseph. “There is the possibility that the government sits on files because they don’t want a particular judge”, said the Justice, who then asserted that some mechanism has to be there to ensure that the timeline of judicial appointments is adhered to. He proposed that “Neither the judiciary nor the government can sit on files on the appointment of judges. If there is no response from the government then the Collegium decisions should be deemed to be accepted”.

Justice Lokur maintained reticence on the query of corruption in the judiciary. On being asked about addressing the grave issue of judicial corruption, Justice Lokur asked Rajdeep Sardesai, “give me the names of the corrupt judges”. Responding to this, Sardesai said that he “would not want to risk a contempt notice from the court by taking names, and would rather have the likes of Advocate Prashant Bhushan to take up the issue”. At this moment, Senior Advocate Indira Jaising raised the question Justice Shri Narayan Shukla of Allahabad High Court, against whom the then Chief Justice of India Dipak Misra had recommended the impeachment proceeding and also recommended the Chief Justice of Allahabad High Court to withdraw the judicial work.

Senior Advocate Prashant Bhushan also weighed in on the issue from the audience and mentioned that a High Court judge, against whom corruption allegations were raised by a sitting Supreme Court judge, was being considered for elevation.

Justice Lokur then mentioned that the system needs to be changed in such a way that the review of judges for corruption is made speedier and that justice is ensured. He also brought up his personal experience in saying that when he was in an in-house enquiry committee, they did find that the accused judge was corrupt. Strangely, he did not know what the then-Chief Justice of India’s final decision on this was. Justice Lokur also mentioned that he believes that every judge including the CJI should be subjected to in-house enquiries when required.

When Justice Lokur was asked if there should be benches of Supreme Court in other parts of the country pic.twitter.com/QBF5iYQzyH

On the Prime Minister

When the question of the proximity of the judges to the Executive was brought up, Justice Lokur rubbished the hype over the Prime Minister attending a dinner hosted by the Chief Justice of India and his visit to Court room no. 1 in the Supreme Court of India.

Justice Lokur said that he found, “it ironic that on the one hand, judges are supposed to be human and approachable, but on the other hand, they are placed in ivory towers”. He said that judges are not hermits, and certain things are far too exaggerated in this aspect.

Answering the question on last year’s unprecedented press conference by the four senior-most judges of the Supreme Court, Justice Lokur said, “It was worth it” and added, “It has brought about some openness in the system”.

On being questioned if the Supreme Court should be running the Board of Control for Cricket in India (BCCI), Justice Lokur said that the Supreme Court had overstepped its jurisdiction. He further added that, “I won’t comment on individual cases. But, yes, there are cases where judges have gone beyond their jurisdiction. The executive overreaches, the legislature overreaches and even the judiciary has done so. It is time we take a step back”.

To the question asked by the audience as to why no Dalit or Adivasi Judge have been appointed to the Supreme Court over the past 8 years? Justice Lokur simply claimed that, “There was not even one senior enough to be elevated”. When being asked about the case which gave him the most inner satisfaction, Justice Lokur drew the attention of the audience to the Vrindavan widows’ case.

This report has been prepared by Nishant Sirohi, staff writer at The Leaflet.

Watch the video of the Q&A.