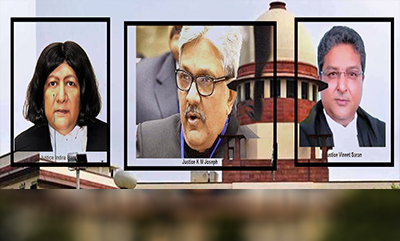 [dropcap]C[/dropcap]entre Government after resisting for last seven months the appointment of Justice K M Joseph as the judge of the Supreme Court India, has finally notified his appointment on August 3, 2018. He will have tenure till June 16, 2023.

Breaking- Government of India notifies appointment of Justice K M Joseph as judge of the Supreme Court of India. pic.twitter.com/OfwsWLp33Z

Breaking- Chief Justice Dipak Misra, being authorised by the President of India, will administer oath of office to the newly appointed justices of the Supreme Court on August 7, 2018. pic.twitter.com/odiafH8gCV

Collegium had recommended their name on the day when name of Justice K M Joseph was reiterated. They will have tenure till September 9, 2022 and May 10, 2022 respectively.

Along-with the aforesaid appointments, the Central government has also notified quite a few appointments of the Chief Justices of the various High Courts as per the following details:

Supreme Court Collegium had recommended above names for the appointments on July 16, 2018.