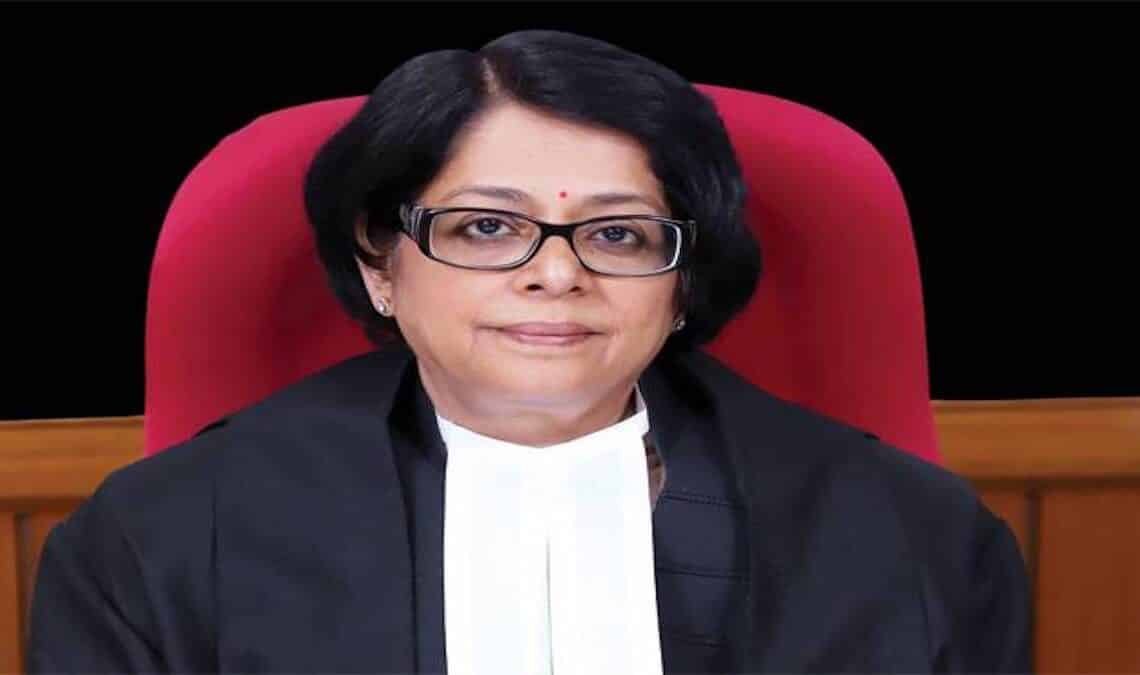 Justice Indu Malhotra retires from Supreme Court: the first woman lawyer to be elevated directly to the bench

Justice Indu Malhotra on her last day at the Supreme Court bid an emotional farewell to her short three-year term. PARAS NATH SINGH reflects upon some of her crucial judgments as well as her administrative work.

AFTER serving close to three years as a judge in the Supreme Court of India, Justice Indu Malhotra retired on Saturday.

The Supreme Court Collegium recommended her name on January 10, 2018, along with the then Chief Justice of Uttarakhand High Court, KM Joseph (now an SC judge).

She was formally appointed only on April 28, 2018, after the Centre sat over the Collegium’s recommendation for more than three months. Even then, it only appointed her and held back the appointment of Justice Joseph.

Justice Joseph was elevated only in August 2018 and so lost his seniority not only against Justice Malhotra but also against Justices Indira Banerjee and Vineet Saran.

Justice Malhotra was the first woman lawyer to be directly elevated to the bench. In her parting remarks, she said she was blessed to have the opportunity to serve on the bench of the Supreme Court.

“Even if it was a short three-year tenure, I leave this court with a great sense of fulfillment,” she said, as she bid farewell.

The Supreme Court is currently working at a strength of 29 judges against the sanctioned strength of 34 judges.

In her short tenure, Justice Malhotra was on Constitution benches dealing with far-reaching issues of constitutional importance as well examining allegations of sexual harassment against the then Chief Justice of India, Ranjan Gogoi.

She was part of a Constitution bench constituted to decide the entry of women to Kerala’s Sabarimala temple, the validity of Section 377 (same-sex relationship) of the Indian Penal Code (IPC), and the validity of Section 497 (adultery) of the IPC. She was the junior-most judge on the bench in these cases and in all barring one, she wrote her separate concurring opinions. In the Sabarimala case, she wrote the dissent.

Agreeing with her four brother judges on the bench, Justice Indu Malhotra held Section 377 of the IPC unconstitutional to the extent that it criminalised consensual sexual acts of adults in private. She did not stop there. Justice Malhotra recognised the agony and suffering that the LBTQ community had undergone due to the criminalisation of their sexual orientation. “History owes an apology to the members of this community and their families, for the delay in providing redressal for the ignominy and ostracism that they have suffered through the centuries,” she wrote.

Members of this community, Justice Malhotra said, were compelled to live a life full of fear, of reprisal, and persecution. This was on account of the ignorance of the majority to recognise that homosexuality is a completely natural condition, part of a range of human sexuality.

She wrote her own opinion – again a concurring – holding Section 497 of the IPC, which criminalises adultery, unconstitutional.

Justice Malhotra said the State must follow the minimalist approach in the criminalization of offences, keeping in view the respect for the autonomy of the individual to make his/her personal choices.

But in the most “contentious” Sabarimala case, Justice Malhotra gave a lone dissenting judgment in favour of Ayyappa devotees by refusing to lift the restriction on women between the ages of 10 to 50 years from entering the temple.

“Notions of rationality cannot be invoked in matters of religion by courts,” she said, even as she went on to question the maintainability of PILs in a matter of religious beliefs, even though that point was not argued at length when the matter was heard over several days.

Since the petitioner-NGO and interveners did not claim to be devotees of the temple, the petition challenging women’s entry to the temple could not be maintained, Justice Malhotra said but went on to give her findings on the merits of the case by upholding the rule that provided for the exclusion of women of the certain age group from entering the Sabarimala temple.

Her dissent was hailed by people claiming to be Ayyappa devotees so much so that her posters were also put in some parts of Kerala to laud her for “protecting” the temple’s traditions and customs.

Justice Malhotra’s dissent in the Sabarimala case paved the way for hundreds of review petitions and writ petitions to be filed in the Supreme Court against the majority judgment striking down the rule that restricted entry of women between the ages of 10 to 50 years to the temple.

By the time the review petitions were filed and considered, the then CJI Dipak Misra who headed the bench had retired. Justice Ranjan Gogoi replaced him.

Justices RF Nariman and DY Chandrachud, who were also part of the original Sabarimala judgment were reduced to a minority, while Justice AM Khanwilkar had a change of opinion that he formed part of the majority view along with Justice Ranjan Gogoi and Justice Indu Malhotra to keep the review petitions pending till larger issues framed by them were adjudicated by a larger bench.

The issues framed in review petitions inter-alia included the interplay between the freedom of religion under Articles 25 and 26 of the Constitution and other provisions in Part III, particularly Article 14.

The decision, to which Justice Malhotra was a part, on a batch of review petitions and fresh writ petitions that had been filed in the Sabarimala case not only undermines the rule of law, it also opens the floodgates to writ petitions that could be filed challenging a court’s order, ordinarily not permissible in law.

Justices Nariman and Chandrachud had emphatically rejected all review petitions against the original Sabarimala judgment holding that no apparent error in the face of judgment was pointed out that warranted a review of the judgment.

In 2019, a bench headed by Justice Malhotra stayed a progressive judgment of the Kerala High Court, which had upheld a decision of the single judge awarding Rs 1 lakh compensation to a petitioner for his illegal arrest on a suspicion of being a Maoist. It was a suspicion that was not based on any valid material. The high court had held his detention violative of Article 21 of the Constitution. The stay still continues with no final disposal of the state’s appeal in sight.

Justice Malhotra was part of some crucial decisions pertaining to arbitration. For instance, she penned a judgment for a three-judge bench holding that the enforcement of foreign award did not contravene India’s public policy, or that it was contrary to the basic notions of justice.

Justice Malhotra also issued guidelines to be adhered to by family courts, district courts, and magistrate courts across the country to overcome the issue of overlapping jurisdiction and avoid conflicting orders being passed in different proceedings.

As for her administrative work, she was part of an in-house inquiry committee clearing the then CJI Ranjan Gogoi of sexual harassment allegations. The report was not made available to the public. The current CJI SA Bobde with Justice Indira Banerjee, its member besides Justice Malhotra headed the committee. The victim, a staff member of the court, withdrew from the proceedings of the committee saying that she had not been allowed to have a lawyer present and was not informed about the procedure that would be followed.

After Justice Gogoi retired from the Supreme Court in November 2019, the complainant woman staffer was reinstated to her job.

The Supreme Court last month also closed the suo motu cases it took up to probe allegations that the sexual harassment complaint against Gogoi was part of a larger conspiracy by ‘fixers and plotters’ to frame him. It said two years had passed and the possibility of recovering electronic records after so long was remote, especially since the scope of the inquiry and the judge’s power was limited. No useful purpose will be served by continuing these proceedings, the court said.

In her farewell speech, Justice Malhotra hoped her serving on the bench of the Supreme Court would pave the way for more women to be elevated from the bar. Her appointment may have set a precedent that the Collegium may choose to follow.

(Paras Nath Singh is a lawyer at the Supreme Court of India. He was part of the team that argued the Sabarimala case on behalf of intervenors who sought the right to enter the temple. The views expressed are personal.)