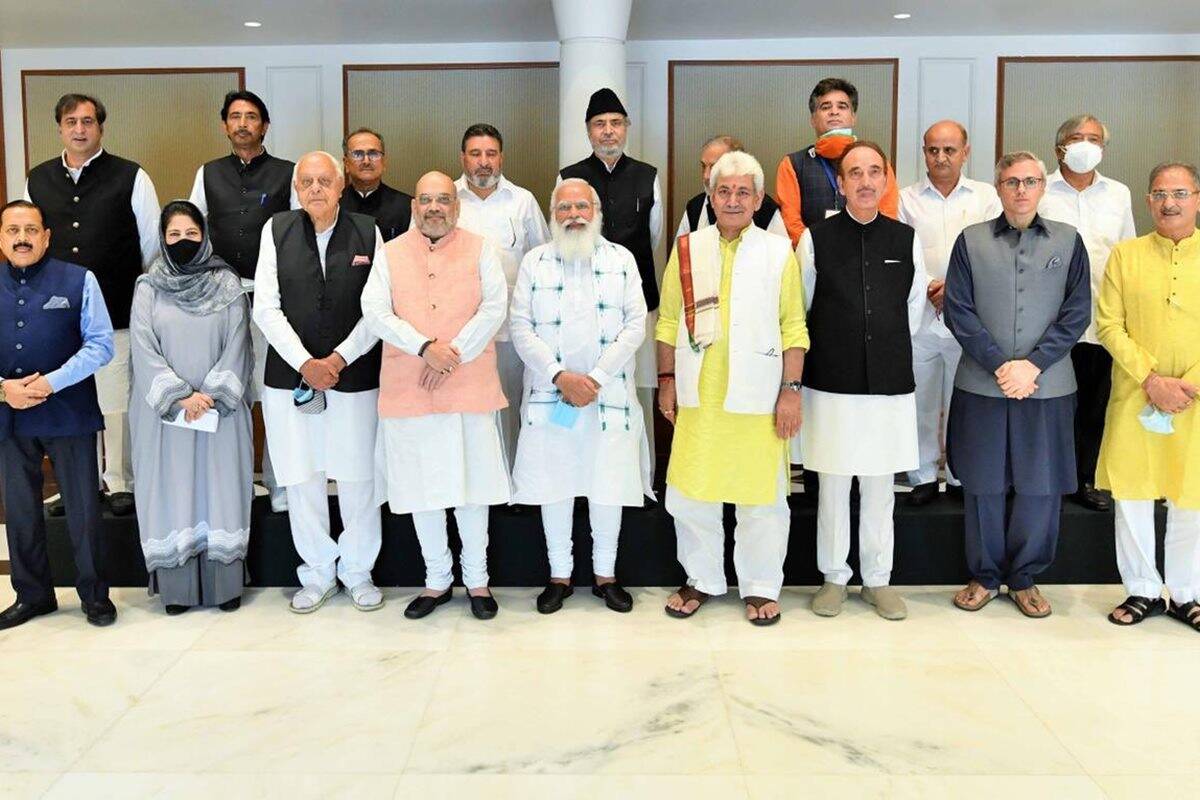 Democracy and Rule of LawGovernancePolitics

Prakash Karat·July 6, 2021
Home
Due Process
Democracy and Rule of Law

Prime Minister Narendra Modi’s meeting with political leaders of Jammu and Kashmir on June 24, 2021 exacerbated speculation about elections in the Union Territory, which have been halted since the abrogation of Article 370 in August 2019, and Modi’s motives behind the meeting. PRAKASH KARAT explains that the meeting was meant to legitimize the BJP’s agenda of demographic change in Kashmir Valley, which begins with the delimitation exercise that will grant more seats to Jammu vis-à-vis Kashmir than before.

THE Bharatiya Janta Party (BJP) led by Prime Minister Narendra Modi and Union Home Minister Amit Shah are determined to change the fundamental character of Jammu and Kashmir (J&K) through their implementations of  a Hindutva agenda.

The meeting of 14 political parties of J&K called by PM Modi was seen as an unusual step. Since August 5, 2019, when the former’s government nullified the special status of J&K granted by Article 370 of the Constitution of India and dismantled the state into two union territories, a relentless effort was made to discredit the mainstream political parties of the region by detaining their leaders and branding them as corrupt and anti-national. Multiple attempts were actively made to hamper their political activities.

Despite all this, the parties of the People’s Alliance for Gupkar Declaration, commonly referred as the Gupkar Alliance, which includes the two main parties of J&K, the National Conference and the People’s Democratic Party, decided to participate in the meeting. They did not, under any pretext, want Modi and Shah to accuse them of refusing to respond to an indeterminate initiative regarding the political process in J&K.

Also read: Script Changes in J&K But Nothing Dramatic to be Expected Instantly

Are BJP’s political ambitions for J&K laced with Hindutva agenda?

The June 24 meeting which had no outcome has raised all sorts of speculation as to the nature and purpose of such an engagement.

Some analysts have suggested that Modi has been compelled to reverse his government’s course of action in J&K as it eventually reached a dead-end; he has thus been forced to back-track and revive the political procedures with the very leaders whom the BJP had denounced and repressed. Such a line of argument can be dismissed without much ado.

Another line of thought refers to the geo-political considerations behind this move. The developments in Afghanistan, where the Taliban is dominant, and Pakistan’s key role in the unfolding scenario is also a major factor.

It is presumed that the United States, which will complete the withdrawal of its forces from Afghanistan in September, is also acting to see that the simmering dispute in Kashmir does not further complicate the situation.

External factors such as the above are definitely a matter of concern to India, but cannot solely be attributed for Modi’s current outreach in J&K.

The meeting with the political parties of J&K stemmed from a much narrower agenda of the Modi-led union government and the BJP. This relates to the ongoing concern to consolidate its ideological and political project to reshape the identity of the region, and obliterate any vestiges of autonomy in J&K.

The bifurcation of J&K into the two union territories of J&K and Ladakh respectively was a calculated and deliberate step.

Having manoeuvred to see that the annulment of Article 370 is not subject to judicial scrutiny so far, the Modi government has been working on the ground to change the demographic pattern by introducing new domicile laws and open access to land and other resources to people from outside the state.

On the political front, a Delimitation Commission has been set up for fresh demarcation of constituencies for the assembly in the union territory. In the old J&K state assembly, there were a total of 87 seats with the Kashmir valley having 46, Jammu, 37 and Ladakh, four. Twenty four seats were also reserved for Pakistan-occupied Kashmir (PoK).

Now the new assembly for the Union Territory of J&K will have 90 seats, seven more than what the region got in the previous assembly. The delimitation is expected to increase the number of seats in the Jammu region, with a provision of reservation of seats for Scheduled Castes and Scheduled Tribes.

The aim is to reduce the weightage given to the valley in the assembly. The gerrymandering would ensure that with BJP’s dominance in Jammu, no future government can exist without the BJP’s role and participation.

The BJP wishes to exacerbate the communal divide between Jammu and the Kashmir Valley through the delimitation exercise. At the same time, the centre and the BJP have been busy trying to disrupt the main regional parties in the Valley and create new unified forces.

Also read: Towards a political paradise of caged parrots

The uncertain future of Jammu and Kashmir

In the June 24 meeting, the direction was clear: Delimitation first, for which all parties should cooperate and legitimise it. This should be followed by elections, after which statehood would be granted at an ‘appropriate time’.

The “chronology” was repeated by Amit Shah who tweeted: “The delimitation exercise and peaceful elections are important milestones in restoring statehood as promised in parliament.”

What sort of statehood was not clarified either in the meeting or outside by Amit Shah either. Is it full statehood of a unified J&K with Ladakh included, or one without Ladakh, with the latter remaining a union territory? And will the state have autonomy like the rest of the states in India, or would it function like the National Capital Territory, whose elected government’s authority is truncated and the writ of the Lt. Governor runs?

The meeting in Delhi and its outcome has been understood by the people of the Valley for what it really stands for. It has only widened the gulf between Delhi and the citizens of Kashmir, with the latter feeling demoralised and highly frustrated. Ultimately, as it stands, the centre seems to wish to rule over Kashmir only through coercion and suppression of the democratic rights of its people. (IPA Service)