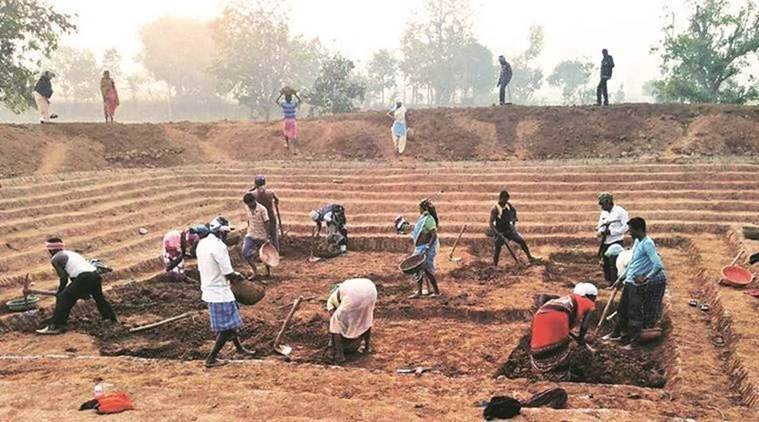 There are glaring anomalies in the implementation of MGNREGA in the Patiala district of Punjab. There are reports of wages under the job-guarantee scheme going to people who are dead. Some have got paid as low as Rs. 5 for a day’s work. While the average number of days of employment under the scheme is less than 40 against the mandatory 100, influential families are cornering most of the benefits, VIVEK GUPTA and MOHIT SINGLA report from Patiala.

BHIM Singh, a daily wage worker from Dakunda village in the Nabha tehsil of Punjab, raised demands for approximately 45 days of work under the Mahatma Gandhi National Rural Employment Guarantee Act (MGNREGA) in 2020 and 2021.

According to the official website of the MGNREGA scheme, he sought work between February 28 and November 16 last year and between 31 May and 6 June 2021. The records also show he was allotted work on all these days. Later, technical staff assessed the work he did and he was paid around Rs.7,500.

There seems nothing extraordinary about these details, except Bhim Singh had died, aged 61, on 7 February last year. According to the official record, he had worked on MGNREGA projects in 2009 and 2011 but had sought work more regularly since 2016. He had earned approximately Rs.30,000.

However, Bhim Singh’s wife Pritam Kaur tells The Leaflet her husband never went to work under MGNREGA. She says she has no idea who claimed the money generated on his name under the scheme, before or after he died.

Pritam lives in a one-room house and survives off the Rs.1,500 monthly widow pension the Punjab government pays her after her Bhim Singh died.

On 22 June, after news of the claims under Bhim Singh’s name came to light, Parvesh Goyal, the Block Development and Panchayat Officer, expelled a contractual “mate”, whose job is to take the attendance of workers at the project site, for incorrect record-keeping.

When contacted, Goyal said the mate forwarded Bhim Singh’s name as employed under the scheme and did not tell the department that he had died. “That is why we expelled her the moment the case came to light,” he says.

Goyal does not have a satisfactory answer to how the technical assistant also measured the dead man’s work or why his name remained on the job card after his death, not how the department would recover the payments to him.

Not the only case

There is an established procedure to remove or add names to MGNREGA job cards, whether on account of death or when new members start work under the scheme. The gram sabha of the village is summoned, at least twice a year, when the local development works under the MGNREGA scheme are discussed at length and the individual records of workers get updated.

As the Bhim Singh episode shows, this exercise is seldom followed, allowing the records to go stale and, in the process, public money is siphoned off.

Ajaib Singh, a resident of Sandhnauli village in Patiala died in 2008, when the MGNREGA, introduced in 2006, was still a nascent scheme. His name should have been struck off from the job card issued to his family, which shows his wife Amrik Kaur as a co-worker. But last year, between May 28 and June 12, the records show he got allotted 14 days of work.

Later, it was revealed that he did some repair and maintenance work for six days and was paid. His wife tells The Leaflet that it is she who did the work and has no idea how her husband appeared in the records as the worker. She has no idea who took the money on his behalf.

She says when she raised the alarm of non-payment of wages, officials marked her as present on some other project and cleared her wages.

Wages go to other accounts

Romaal Kaur of Lubana Teku village in Patiala (Rural) was not paid despite having worked while the records showed she was. A year later, she discovered that her wages, Rs.18,000 in all, were sent to some other account, of a “Rupinder Kaur” in the village.

Romaal went from pillar to post but nobody in the department helped her. She even approached the village sarpanch. In the end, she could only Rs.10,000. Her father Bakhtaur Singh says they refused to keep the money. “It is my honesty that I paid back the money, for it was the department’s liability, not mine,” he says.

Bhinder Kaur from the Hiana Kalan village, also in Patiala rural, recovered Rs.10,000 of the Rs.22,000 she is owed in a similar way. Surjit Kaur, another MGNREGA worker in Lubana Teku, also says she worked for 60 days last year but earned not a penny.

“When I inquired, I found my wages were sent to ‘Sarbjit Kaur’. I have not been able to locate her so far and even the department was no help to me,” she says.

When contacted, Patiala Rural BDPO Rajneesh Garg says there are 20,000 MGNREGA workers in his area. There are chances of “human errors”, he says, but adds that the department is very prompt in making corrections once they come to knowledge. “We get these cases checked and take remedial measures if these complaints are found genuine,” he says.

In a rude shock, 32 labourers from the Kalah Majra village in the Nabha tehsil got paid a paltry Rs.5 per day, while others received Rs.17 per day for excavating the village pond. The daily wages under the job-guarantee scheme is Rs.269 per day.

One of these workers, Balwinder Singh, says he worked for 11 days but received payment at the rate of Rs.5 per day for one week of work, and Rs.30 each for the remaining four days.

When they protested, the workers were told the low payment was because their work was unsatisfactory. “If our output was so low, why were we not told on the first or second day of working, or anytime later,” says Balwinder Singh. He says, “We filed many complaints but all in vain.”

Kulwant Kaur, Jaswant Kaur and a few others got paid Rs.171.48 for ten days of work last year, which works out to approximately Rs.17 a day. These workers say, the low wages were a kind of snub, for they had pressed the department for regular attendance on a muster roll sheet instead of a rough page, as is the practice. Eighteen workers from Kansuha Khurd village in the same tehsil were paid Rs.50 per day last November.

When their queries went unanswered, they filed an RTI. According to the reply dated 28 May, from the Additional Deputy Commissioner office (Development), Patiala district, their wages were based on their work output as measured by a technical assistant (TA). “Based on [the] TA’s report, we had through a letter dated December 24, 2020, sought the inquiry report after recording the statement of complainants, sarpanch and mate concerned. The same is still awaited,” the reply says.

One of the complainants, Lakhwir Singh, says the department is sitting over their complaint though eight months have gone by.

Sarpanch and family got full 100 days of work

The MGNREGA website records 20 lakh registered households and 32 lakh workers under MGNREGA in Punjab at present. Of these, 12.4 lakh households, which adds up to 16.5 lakh workers, are active.

In the last financial year, the average number of days of employment provided to 12.4 lakh households was just 39.5 days, as against the mandatory 100 days. But a few influential families are getting full benefits of the scheme.

Beant Kaur and her family were not enrolled as MGNREGA workers before she became sarpanch of village Dandrala Kharaur in January 2019. Soon after she assumed charge, in 2019-20, her family did 54 days of work. The next year, 2020-21, the family availed full 100 days of work.

Panchayat member Tinku Batta alleges that the sarpanch’s family never worked under MGNREGA, yet they were paid wages for the full 100 days last year. He says the records show that the Sarpanch Beant, her husband and her son worked under MGNREGA projects, whereas the husband holds a private job and the son is a student.

Sarpanch Beant Kaur could not be contacted, but her husband, Bhinder Singh, says the allegations are a result of “dirty party politics”. “Before my wife became the sarpanch, we had applied several times to get enrolled as MGNREGA workers but the previous sarpanch did not allow this. To say that our family is paid without work has no ground. We availed wages after we worked,” he says.

Rajkumar Kansuha, a member of the MGNREGA Front, a group fighting for proper implementation of this scheme in Patiala, told The Leaflet that as per the government records, just 27,000 households got 100 days of work in Punjab out of 16 lakh workers.

“It is a common practice that most of those who get full employment under the scheme are the near and dear ones of sarpanches or officials, while others struggle to get adequate employment and proper wages. Technically, sarpanches or their family members or employees should not be enrolled under MGNREGA, but no one bothers,” Kansuha says.

(Vivek Gupta and Mohit Singla are independent journalists. The views expressed are personal.)