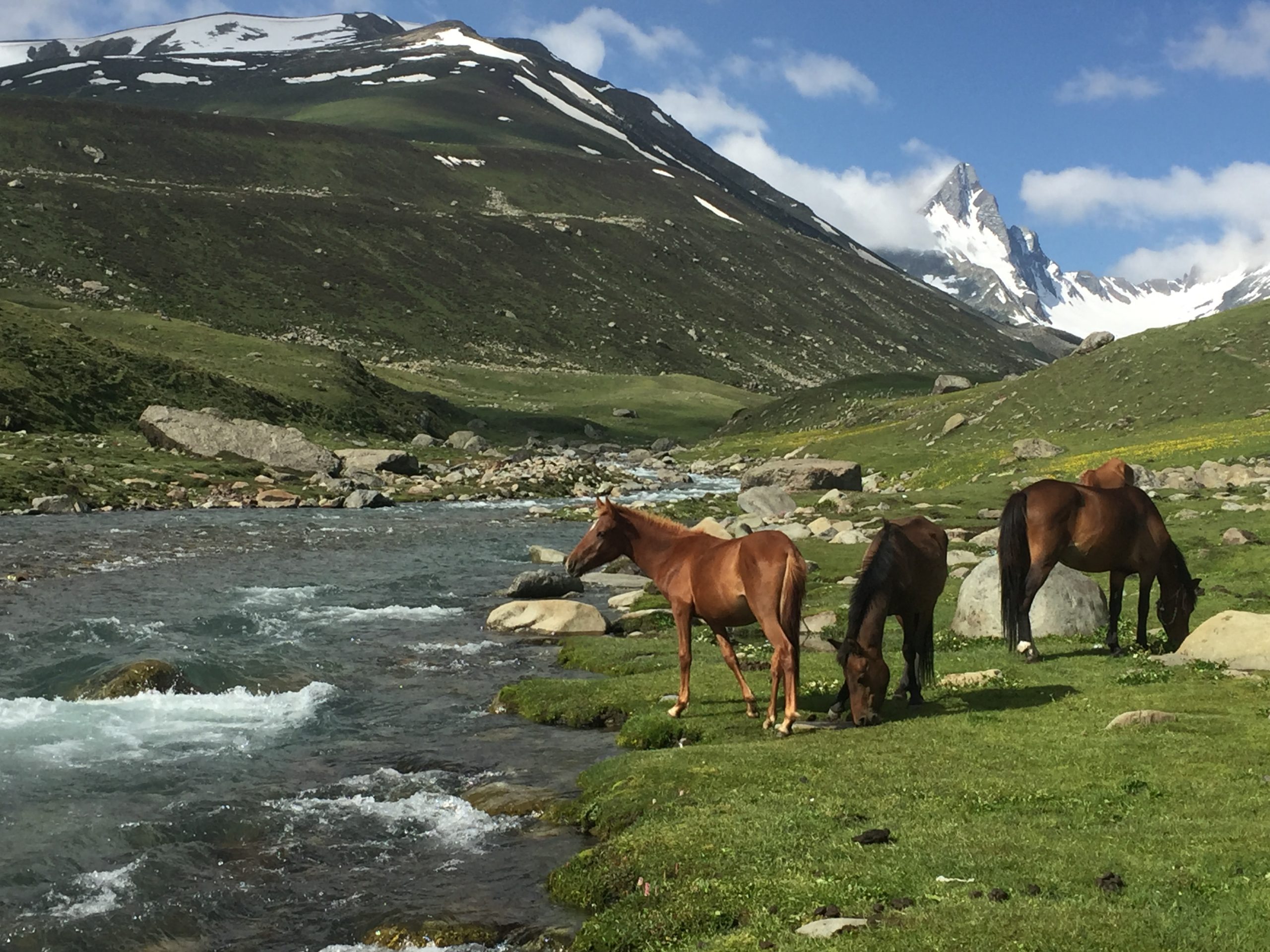 The use of pesticides in orchard farms and paddy fields of this scenic state has led to the chemicals seeping into rivers and streams and affecting drinking water sources. While the J&K Pollution Control Committee has a great role to play in looking into the contamination and can take action against erring farmers violating the Water (Prevention and Control of Pollution) Act, 1974, little has been done by authorities. This is a violation of Article 21 of the Constitution and a citizen has the right under Article 32 to seek justice, writes RAJA MUZAFFAR BHAT.

JAMMU & KASHMIR has enormous sources of water, both for drinking and irrigation. It has huge glaciers, rivers, streams, lakes and rivulets. In spite of such abundant water resources, the majority of people living in towns, villages and cities are supplied with unsafe drinking water.

The raw water supplied to drinking water supply plants is contaminated, not only by solid or liquid waste or human and animal faecal matter, but various types of pesticides and fungicides that are sprayed in apple and vegetable farms, golf courses, gardens and parks.

Doodh Ganga, which means “Milky River”, is no more milky. This small river originates from the Pir Panjaal glaciers of the inner Himalayan region is pristine and clear when it leaves the glacier. But after travelling just 30 km downstream, it gets contaminated with pesticides which get drained into it from nearby apple orchards.

Solid and liquid waste was already a threat to Doodh Ganga. The water supplied from the Doodh Ganga water filtration plant at Kralpora is unfit for drinking, especially in summer months, when the pesticides sprayed in orchards are washed into it by frequent rains.

“The polluted water from Doodh Ganga is lifted at Kralpora filtration plant and then supplied to more than half a million population living in Srinagar uptown after sedimentation and chlorination. Will this be enough to make this water fit for drinking, which not only contains liquid waste but poisonous pesticides too? The Pollution Control Committee hasn’t even looked into this aspect, it seems,” said Raashid Ashraf, a social activist from the Kralpora area in Srinagar’s outskirts.

Tonnes of municipal solid waste are dumped on the Vishaw river banks in Kulgam, a South Kashmir district headquarter, on a daily basis by none other than the municipal committee. This is an open violation of the Municipal Solid Waste Rules of 2016 by a municipal institution itself, which is supposed to enforce them.

In addition to solid waste and sewage from Kulgam town, pesticides also contaminate this river, which is a drinking water source for thousands of families in Kulgam and Anantnag districts in South Kashmir.

From spring season (March onwards), large amounts of pesticides are sprayed on apple trees in Kulgam district. These get washed into small rivulets and streams and end up in Vishaw river. If there is rainfall after the pesticide spray, the drinking water sources get more contaminated.

Saqib Qadri, Convener of Srinagar-based Peoples Environment Council (PEC) told The Leaflet: “The Public Health Engineering (PHE) Department, also called Jal Shakti Department, is not only supplying unhygienic and untreated drinking water to people of Kulgam, but also to neighbouring Anantnag and Shopian districts. Experts from the horticulture and agriculture departments have never created any awareness among farmers on management and protection of water bodies from pesticide sprays. The government should create a joint task force of agencies such as the PHE and the horticulture and agriculture departments to impress upon farmers the need to ensure minimum damage to water bodies while spraying chemicals. It would be better for farmers to shift to organic farming.”

Shali Ganga means “river supplying water to paddy”. There were many paddy fields on the banks of Shali Ganga 20-30 years back. These fields have now been converted either into apple orchards or residential colonies. The PHE lifts raw water from Shali Ganga at many places and supplies them to dozens of villages in Khansahib sub-division and some areas of Chadoora sub-division.

Millions have been spent on construction of water tanks and filtration plants in Budgam district by the government, but many of these schemes are either defunct or don’t function properly.

When this writer visited Arigam, he found a water tank getting untreated water from Shali Ganga in shambles.

This tank supplies drinking water to almost eight villages with a population of 20,000. Heaps of cow dung lie scattered in Arigam and other villages. This oozes out into Shali Ganga when there is rainfall.

Household liquid waste from kitchens, bathrooms and lavatories also enter Shali Ganga from Doodh Pathri to Buchroo, a stretch of around 30 km. Above all, the pesticides from farms and paddy fields further contaminates Shali Ganga. Authorities have never taken notice of it.

Mohammad Iqbal, a local resident of Arigam, said: “Arigam village gets drinking water from a rivulet directly through an open pipe. The water is contaminated with solid and liquid waste. In summer when pesticides like diammonium phosphate, urea and copper sulfate are sprayed on apple orchards and paddy fields, they too enter the rivulet. If research is conducted on the effects of contaminated water on the health of people in Arigam alone, the results will be shocking.”

Even the world-famous Dal Lake in Srinagar is highly contaminated as faecal matter from around 750 houseboats and residential houses.

Lakes and Waterways Development Authority, a government-owned body with a huge annual budget, has not found a solution to this problem despite billions spent on the maintenance of the Lake in the last three decades.

The most alarming situation is the use of pesticides in floating vegetable gardens of Dal Lake and surrounding apple orchards.

Pesticides are also used in the famous Mughal and tulip gardens and golf courses in the city and enter Dal Lake.

“Dal Lake gets regularly contaminated with pesticides from March to August. This is not only harmful for humans, but for fish which is consumed in large quantities by Kashmiris. They too contain pesticides as many scientific studies have proved,” said Prof G A Bhat, former professor of Environmental Science University of Kashmir.

Ironically, water from the Dal Lake is lifted by the Jal Shakti Department around Nigeen locality and supplied to around two lakh people in some areas of Srinagar’s old city.

“Pesticide concentration in drinking water cannot be controlled by obsolete processes like sedimentation or use of bleaching powder, which is normally done by Jal Shakti to kill the bacteria in water. In fact, bleaching powder itself is harmful if used directly in water, as is done in many places of Kashmir. The Jal Shakti department needs to do a lot of research to ensure drinking water is safe from pesticides,” Bhat added.

A report published in the International Journal of Pharma Sciences and Research (Dr Muddasir Bandy and others, December 2012) on contamination of fresh water fish, “Schizothorax Niger”, (Algad Snow trout) with chlorpyrifos from “Dal Lake” basins indicates that chlorpyrifos, an organo-phosphate pesticide, was present in “Schizothorax Niger”.

The State Pollution Control Board, now named the J&K Pollution Control Committee (J&K PCC), has a great role to play in looking into the contamination of drinking water by pesticides. JK PCC can take action against erring farmers who are found violating the Water (Prevention and Control of Pollution) Act, 1974 by draining out chemical fertilisers into drinking water sources.

The erstwhile J&K State Pollution Control Board (JK SPCB) hasn’t conducted any study to ascertain the impact of pesticides effluents on drinking water sources or other water bodies.

If this is true, the CPCB needs to take a notice of it. It also needs to explore whether drainage of pesticides into rivers and lakes of Kashmir is a violation of the Hazardous Waste Management Rules 2016, with all its four amendments from 2016 to 2019.

Article 21 of the Constitution assures citizens of India the right to a healthy environment. The provision of the Right to Healthy Environment was not included when the Constitution was drafted and approved by the Constituent Assembly. The topics in the state list on which the state can enact legislation are health, hygiene, agriculture, soil, water, etc. The Union List includes issues like nuclear energy, oil fields and resources, interstate rivers, etc., for which only Parliament has the power to make laws.

The Preamble to the Constitution makes it clear that socio-economic justice is the basis of our Constitution. The apex court held that the right to life under Article 21 is a fundamental right and includes the rights to free water and free air from pollution for the full enjoyment of life in the case of Subhash Kumar v/s  State of Bihar.

If anything endangers or impairs that quality of life in derogation of laws, a citizen has the right under Article 32, which gives him the right to move to the Supreme Court, to seek justice when he feels that his right has been “unduly deprived”.

This can be done when the state fails to provide safe drinking water to citizens.

A study by Prof Abdul Rashid Bhat, a neurosurgeon, and others from the SK Institute of Medical Sciences (SKIMS), Srinagar, linked pesticides to brain cancer. The report published in the Indian Journal of Medical and Paediatric Oncology in October 2010 revealed that 389 out of 432 cases of primary malignant brain tumours that were examined by SKIMS during a scientific study in 2010 (excluding metastatic lesions), were those of orchard farm workers.

While 61% of farmers/farm workers were affected after getting directly exposed to various pesticides in apple farms, almost 39 % were indirectly exposed, which includes intake of contaminated drinking water. Most of the affected districts, as per the study, were Anantnag, Baramulla, Budgam and Shopian.

Inputs from health and other experts and studies make it clear that drinking water is not safe in J&K. Governments and scientific institutions need to do many studies on contamination of drinking water sources by pesticides.

The Jal Shakti Department is unaware of this alarming situation. They have techniques to kill bacteria in water, but what about the treatment of water that contains pesticides?

The Department needs to liaison with farmers through horticulture and agriculture departments and seek guidance from the J&K PCC as well. Capacity building programmes should be held for farmers to ensure pesticides used in farms don’t contaminate nearby drinking water sources. The government needs to come up with legislation and measures to do so.

It is a long battle ahead.