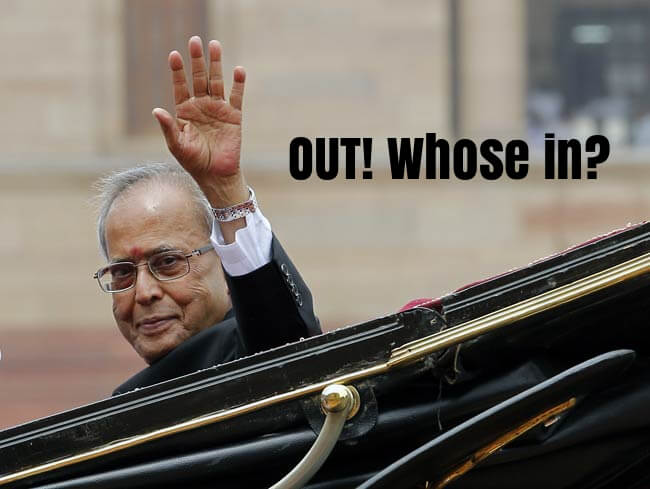 It is the Prime Minister who chooses the President

Although the President of India is only a Constitutional head, usually the Presidential election becomes a hot political issue. It is especially so when the ruling party/combine does not enjoy a clear majority among the Electoral College which elect the President.

The next President has to take office on the 26th July and therefore the election process will start this month. The announcement by the Election Commission has been made that the election will take place on 17th July.

“Normally a lot of discussion on the probable candidates takes place much in advance in the public domain. This time around, what is very unusual is that no name has been seriously discussed so far either in the political circles or in the media. By all accounts the Presidential election is being treated as a non-event. Perhaps the major political formations are waiting for each other to announce their candidate first. As things stand today, the NDA candidate may not be a show interest but the ruling party seems to have garnered support from some of the non-NDA parties. This is a natural advantage always enjoyed by the ruling party(ies) in India. Nevertheless it is intriguing that no Presidential candidate has been unveiled for the pubic so far.”

But the election is not as simple as the above numbers suggest. The Constitution has introduced the concept of value of votes. Accordingly, the vote of members of each State Assembly has a certain value determined in accordance with a formula described in Article 55(2) (a), (b) and (c). As per this formula every elected member of the Legislative Assembly of a State will have as many votes as there are multiples of one thousand in the quotient obtained by dividing the population of the State by the total number of the elected members of the Assembly. It must be clarified that the population that is taken into account for computing the value of votes in a State is the Population as per census 1971 and not the latest one. It shall be so till 2026 as per the provisions of Article 82 of the Constitution. In simple formula, the value is arrived at by at by first dividing the population by the number of seats in the Assembly. Thereafter, the quotient should be divided by 1000. The result of the division is the value of the vote of an MLA in a State. For example, the population of Kerala was 21347375 in 1971. The total numbers of seats in the Assembly are 140. So, when the population is divided by 140, the quotient is 152481. This figure is to be further divided by 1000. We got the figure of 152 which is the value of each MLA’s vote in Kerala. When we multiply 140 with 152 we got the figure of 21280 which is the total number of votes from the State of Kerala. So calculated, the total votes of the elected MLA’s in the country are 549474.

Article 55(3) says that the election of the President shall be held in accordance with the system of proportional representation by means of the single transferable vote. Under this system, a voter can indicate his preferences for more than one candidate like first preference and second preference and so on which he can mark against the names of candidates in the ballot paper. Further, the winning quota is fixed and the candidate who secures this quota is elected. The winning quota is arrived at by ascertaining the 1st preference votes of each of the candidates and adding them up and then dividing it by two. After division, one is added to the quotient and the remainder is ignored. Suppose there are three candidates and at the end of the count and no candidate secures the quota, then the candidate who secures the lowest number of votes is eliminated and the preference votes recorded in his ballot papers are credited to the other two candidates as per the preference recorded therein. Then, counting will go on till a candidate is elected.

The election commission conducts the poll as per Article 324 of the Constitution. The Presidential and Vice Presidential Elections Act, 1952 and the Rules made there under contain the detailed provisions relating to the election of the President and the Vice President. This Act requires the Election Commission to issue a notification appointing the dates for completing the various stages of election. Under Section 4(3) of the above Act, such notification can be issued on or after the 60th day before the expiration of the term of the office of the outgoing President. This would mean that a notification announcing the Presidential election can be issued two months before the present President demits office. But the Act provides a convenient time frame to the Election Commission by saying “as soon as conveniently may be after” the 60th day. The only condition stipulated is that the new President should be available to enter upon his office on the day following the expiration of the term of office of the outgoing President.

Under the law a nomination can be rejected at the threshold only if it is not accompanied by a certified copy of the entry relating to the candidate in the electoral role of his Parliamentary constituency. Non-serious nomination would be accompanied by this document so they cannot be rejected. The law requires that every nomination must have fifty electors as proposes and fifty as seconders. The funniest part of these non-serious nominations is that their proposers are mostly mythological characters like Ram, Sita, Hanuman, Ravan etc. Some candidates have Ram, Sita and Ravan together as proposers and seconders. If an appropriate amendment is made in the law these nominations could be rejected at the filing stage itself.

Presidential election is an indirect election, but the whole nation participates in it. The constitution makers put in an indirectly elected President because under the system of responsible Government introduced by the Constitution, real power would vest in the Ministry, so it would be anomalous to elect the President directly by the people without giving him real powers (Constituent Assembly Debates). However, the formula laid down in Article 55(2) ensures that the President is in effect elected by the country as a whole. Further, the federal character of the republic is emphasised by the parity that is secured between the State and the Union in terms of votes. For example, the total votes of MPs are 549408 and those of MLA are 549474. Similarly, there is almost uniformity in the scale of representation of States in the Presidential election. For a total population of 549302005, the value of vote is 549474. The method of computation of votes and their value has been ingeniously worked on to ensure that an elected President truly represents the people of the country.

The Prime Minister has always been very careful about the choice of the Presidential Candidates. There is always a disturbing thought at the back of a Prime Minister’s mind that a Politician President may create constitutional and political problems for his Government. There were serious difference between Rajiv Gandhi and Giani Zail Singh. In the above case the differences were well known. But there have been undisclosed and un-discussed differences between Prime Minister and President in the past. If a particular individual chooses to act as a rubber stamp President, that is his choice. But the Constitution can be used by a determined President to make the Prime Minister and his Council of Ministers lose sleep on occasions. That is the reason why a Prime Minister becomes extremely careful about selecting a Presidential candidate. People may innocently believe that our MPs and MLAs elect the President. But it would be more correct to say that it is the Prime Minister who chooses the President. That explains why no one is making a guess, as they would invariably go wrong.

Author is a former Secretary General of the Lok Sabha.