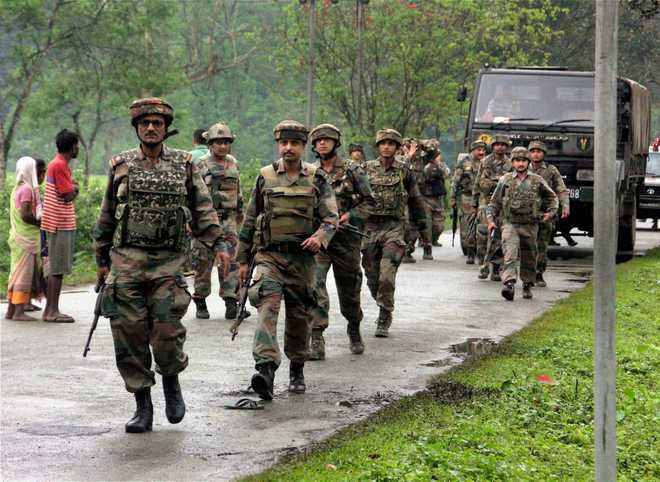 The Essential Defence Services Bill, 2021, prohibits workers engaged in essential defence services from striking work especially in light of the decision to corporatise the Ordnance Factory Board. In a two-part series, K.R. SHYAM SUNDAR critically analyses the Bill. Part I deals with the apprehensions and views of trade unions and the continuation of a colonial practice to ban strikes and lockouts

The decision to corporatise the Ordnance Factory Board (OFB) and make strikes illegal has pitted the staff of the ordnance factories and civilian defence employees against the Centre.

The OFB, under the Department of Defence Production (DDP) of the Ministry of Defence (MoD), comprises 41 ordnance factories producing arms, explosives and ammunition. Besides, there are nine central public sector undertakings (PSUs), like HAL and BEL, which are under the administrative control of the department.

The decision to dissolve the OFB and replace it with seven government-owned corporate entities was rejected by the employees, who fear eventual privatisation and losing the security of their service and retirement conditions.

On June 27, the 80,000-strong workforce of the ordnance factories and 4,00,000 civilian defence employees, under the banner of three recognised unions, declared that an indefinite strike would start on July 26.

Corporatisation of the OFB is expected to result in economic efficiency, improve corporate governance and enable access to market funds, among others.

In 2001, the Centre opened up the defence sector to the private sector with foreign direct investment (FDI) up to 26%, both subject to licensing. In 2016, it allowed FDI under the automatic route up to 49% and above 49% through the government route wherever it was likely to lead to access to modern technology.

In May 2020, FDI in the sector was increased from 49% to 74%, and up to 100% through the government route as part of the reforms in the defence sector to boost self-reliance. In the same month, the quest for self-reliance was rechristened as Atmanirbhar package.

On May 16, 2020, Union finance minister Nirmala Sitharaman announced structural reform measures for several sectors, including defence. She proposed two measures to enhance self-reliance, viz. ‘Make in India’ for self-reliance in defence production, and improve autonomy, accountability and efficiency in ordnance supplies by corporatisation of the OFB. This was followed by the constitution of an empowered group of ministers (EGoM) in September 2020 to oversee and take the measures forward.

On June 15, 2021, the Union Cabinet approved the policy measure to corporatise the OFB and bundle them into seven corporate entities. Critics have questioned the operational validity of the corporatisation process.

Apprehensions and views of trade unions

The government has assured that all employees belonging to groups A, B, and C would be transferred to the corporatised entities on deemed deputation initially for two years without changing their service conditions. Further, their pension liabilities would be borne by the Central government.

However, workers have some grave concerns. Trade unions have contested the very process and logic of corporatisation and pointed out some serious implications for employees and even for the defence sector.

All India Defence Employees Federation (AIDEF) Secretary C Srikumar observed that ‘the government is converting the OFB into a corporation only to privatise it (later)”. This apprehension is supported by the fact that Sitharaman announced in May that there would be a maximum of four PSUs in the strategic sector and all others would be privatised.

Also read: Corporatisation of ordnance factories may lead to selective privatisation in the long term

Even if the entities are declared part of the strategic sector, there is no guarantee they will not be privatised. The main contention of the unions is that economic efficiency can be achieved even staying within the government-regulated framework. On November 21 2020, the trade unions had submitted their reform proposals to enhance economic efficiency to the government. The government has not considered the proposal.

The unions further argue that the decision to corporatise the OFB is arbitrary, and violates the previous commitment by various governments and also the settlement reached with the Centre in October 2020.

Trade unions were always against corporatisation of the OFB. In fact, one of the issues of the general strike called by a majority of CTUs in the 2010s concerned allowing FDI and privatisation of defence, the railways and insurance.

In August 2019, the three recognised union federations—AIDEF, Indian National Defence Workers’ Federation and even the RSS-affiliated Bharatiya Pratiraksha Mazdoor Sangh—struck work. As a result, the Ministry of Defence constituted a high-level committee of the DDP on June 2, 2020, to address the concerns of the trade unions regarding corporatisation of the OFB. The committee assured the trade unions that it would engage with them as per their request.

When the government started pushing for the corporatisation of the OFB aggressively even during the pandemic last year, the federations called for an “indefinite strike” to be held from October 12, 2020. However, it was deferred as a result of a conciliated settlement between the Centre and the unions that the service conditions would remain the same and the federations can express their concerns to the EGoM.

However, the government and the unions made little headway for two reasons. First, while the government asserts that corporatisation is a “policy decision” and non-negotiable, the trade unions contest its very validity and legitimacy. Second, the workers want their service conditions to remain unchanged.

Corporatisation measures had been shelved for several years thanks to the agitations and strikes by trade unions. However, the current regime has assumed ‘emergency powers’ to prohibit strikes in the defence sector to thwart any attempts to block corporatisation. The Bill is similar to the Essential Services Maintenance Act (ESMA), 1968. The Central and the state governments have often used ESMA to prohibit strikes.

The use of emergency powers was typically a colonial strategy. State intervention in industrial disputes became very severe during the Second World War, when the British introduced the Essential Services Act, 1941, and the Defence of India Rules (Rule 81-A, introduced in 1942, and Rule 56-A, introduced in 1943) to ban strikes and lockouts and other forms of industrial protests. General and political strikes were also prohibited.

In the neo-liberal dispensation, governments, irrespective of the party in power, have used ESMA to secure reform objectives. In this sense, the ‘globalisation logic’ drives the state to acquire extraordinary powers, as in the defence sector now. From a welfare state, India is becoming a hard reform state which would use all the strategies up its sleeve to drive reforms even if they are antithetical to the ethos of our pluralistic democratic state.

The government should not introduce laws that have a colonial hangover. In a democracy, workers have the right to strike if their legitimate demands are either not met or new laws endanger their job security.