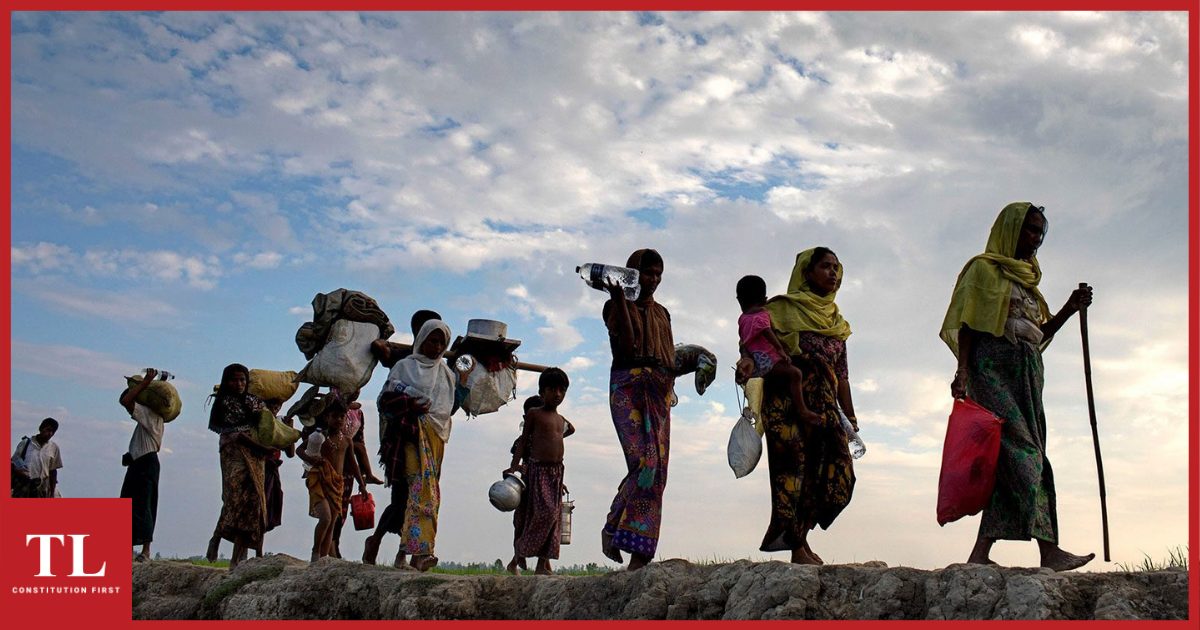 The Supreme Court order denying Rohingya refugees the relief of not being deported comes at the cost of several international treaties that India has ratified, and which it is bound to comply with. Yet the court did not consider these obligations at all, writes PRIYA PILLAI.

ON 8 April, the Supreme Court issued an order denying interim relief in a writ petition relating to pending deportation proceedings against Rohingya refugees from India to Myanmar. In the brief, six-page order, the court said there was no need to grant the relief requested. The bench scarcely engaged with the arguments of the petitioners. Instead, seemingly, it took at face value the arguments of the Union of India.

The operative part of the Supreme Court order—paras 12 to 15—barely acknowledges the legal issues that need to be addressed to reach such a decision. While other lawyers have focused on the Indian constitutional provisions and principles at stake—here and here—I focus on the international law omissions.

The first legal issue that needs to be addressed directly relates to the lack of appreciation of the legal principle of non-refoulement by the court. The court glibly notes that India has not signed the 1951 Refugee Convention and protocol, inferring that this is sufficient for the non-applicability of the principle of non-refoulment. It then says, “…National courts can draw inspiration from International Conventions/Treaties, so long as they are not in conflict with the municipal law.”

However, this contention is then not followed through to its logical next step, i.e., to address the non-refoulement arising from these treaties. Furthermore, it is not just a matter of drawing inspiration but following the past precedent of this very court on the applicability and interpretation of international law.

Non-refoulement means ensuring that a refugee is not made to return to a country where they would be likely to face persecution. It is an indelible aspect of several international treaties India has signed and ratified.

By way of one illustration, the Committee on the Rights of the Child in its General Comment No. 6 on “Treatment of unaccompanied and separated children outside their country of origin” indicates the obligations on states not to send children back into a situation of danger and invokes the rights in the convention such as the right to life (Art. 6) and the right against torture (Art. 37), but does not limit non-refoulement to these rights only. (Related to this point, and separate from the case being discussed, recently the government also attempted to deport a child on her own to Myanmar, a clear violation of the international legal obligations as described above.)

India has also signed—but not ratified—the Convention against Torture and Other Cruel Inhuman or Degrading Treatment or Punishment (CAT), and the International Convention for the Protection of All Persons from Enforced Disappearance (CPPED). These treaties contain explicit standalone provisions relating to the principle of non-refoulement—Article 3 of CAT, and Article 13(7) of CPPED.

While the argument, no doubt, will be that these treaties have been signed but not ratified, it is pertinent that treaty signature entails the obligation not to defeat the object and purpose of a treaty, per the Vienna Convention on the Law of Treaties (VCLT). And while India has not signed or ratified the VCLT, again, the Supreme Court has indicated that principles of customary international law emanating from the VCLT relating to interpretation are to be relied upon. This brings us to the next point—the principle of non-refoulement is considered part of customary international law.

In terms of its applicability, the Supreme Court has noted that customary international law which is not contrary to domestic law, is to be deemed incorporated into domestic law (People’s Union for Civil Liberties vs Union of India). Furthermore, the Supreme Court has relied on the VCLT as containing “many principles of customary international law”, and specifically relied upon the rule of good faith interpretation in Article 31. This despite India not being a signatory to or ratifying the VCLT (Ram Jethmalani vs Union of India).

Indian courts rely upon the international jurisprudence and treaty provisions regularly. India has also signed and ratified the Genocide Convention, for example, which makes its provisions binding.

This has also extended to soft-law instruments and declarations in many cases. (For example, in People’s Union for Civil Liberties v. Union of India, the Supreme Court interpreted domestic legislation vis-à-vis the Paris Principles). Given this ample evidence and ability of the court to assess international law effectively, it is indeed puzzling that a critical component of the arguments—which rest on international law—has not been addressed.

Genocide Convention and case before ICJ

That India has ratified the Convention on the Prevention and Punishment of the Crime of Genocide (Genocide Convention), and that there is a case before the International Court of Justice based on this convention, are matters of legal import that seem to have eluded the court. This is significant in two ways—the underlying rationale for the Genocide Convention and the obligations that emanate from it as well as broader questions about the relationship between domestic and international courts.

At the outset, it is worth quoting the Advisory Opinion of the International Court of Justice in Reservations to the Convention on the Prevention of and Punishment of the Crime of Genocide (ICJ Reports 1951, p. 23) where it states:

“The objects of such a convention must also be considered. The Convention was manifestly adopted for a purely humanitarian and civilising purpose. It is indeed difficult to imagine a convention that might have this dual character to a greater degree, since its object on the one hand is to safeguard the very existence of certain human groups and on the other to confirm and endorse the most elementary principles of morality. In such a convention, the contracting States do not have any interests of their own; they merely have, one and all, a common interest, namely, the accomplishment of those higher purposes which are the raison d’être of the convention.”

The ethos that infuses the convention, described above in the words of the court, has now taken a more concrete legal shape in the recent case of The Gambia v. Myanmar. The Gambia argues that it does not have to be specially affected to make a claim based on the Genocide Convention, but that it does so on behalf of the international community. The assertion is that the prohibition of genocide is a jus cogens norm, and results in obligations erga omnes and erga omnes partes—towards the international community as a whole as well as to parties to the convention.

Based on this legal argumentation—which is derived from the ICJ judgment in Questions relating to the Obligation to Prosecute or Extradite (Belgium v. Senegal)—The Gambia instituted proceedings before the International Court of Justice. The court, on 23 January 2020, issued an order of provisional measures in favour of The Gambia. This is a legally binding order issued under the aegis of Article 41 of the Statute of the ICJ, which enables interim measures of protection. The court has ordered Myanmar to comply with the obligations of the Genocide Convention, to report to it at specified intervals on compliance, and to preserve evidence within Myanmar.

The Union of India has made the specious argument—paraphrased in para. 11 of the order—that the “…decision of the International Court of Justice has no relevance to the present application…”. This has been taken at face value by the court, with no further assessment or inquiry. First, the ICJ provisional measures order—a binding decision of an international court—in a matter that is directly related to the question of genocide, and the well-founded fears of individuals should they be returned to Myanmar, is legally and factually relevant.

Second, the argument of the irrelevance of the ICJ order is ironic, when recalling the provisional measures order in the Jadhav case (India v. Pakistan), which was hailed as a resounding victory that must be complied with.

Binding orders of an international court ought not to be dismissed without consideration by the Supreme Court.

The case before the ICJ is directly relevant to the assessment of danger to the Rohingya. However, there is also more to this matter. The point simply put is this—binding orders of an international court on a legal matter of direct import—ought not to be dismissed without consideration by the highest court of the land. This may well have an impact on larger issues of engagement between international and domestic legal systems, judicial interpretation, and matters of judicial comity. While less tangible and less important for now, these are also factors that must be taken into consideration.

The 2018 and 2019 reports of the Independent International Fact-Finding Mission on Myanmar (FFM)—a group of experts appointed by the UN Human Rights Council—contain much of the factual and legal detail relating to the basis of the assertions of genocide and other international crimes against the Rohingya. These reports have been relied upon by the International Court of Justice in the order on provisional measures.

At the same time, at the International Criminal Court that is dealing with the situation of Bangladesh/Myanmar, a pre-trial chamber has authorised the prosecutor to proceed with an investigation into international crimes committed against the Rohingya. Simultaneously, the Independent Investigative Mechanism for Myanmar (IIMM) is mandated to investigate and prepare case files regarding international crimes committed since 2011.

The weight of all these legal developments should surely have given pause to the court, to take into consideration with all seriousness, what these international legal proceedings say about the condition of the Rohingya in Myanmar and their fears should they be forcibly returned. The failure to do so, and to apply the law at hand, is an egregious omission.

(Priya Pillai is an international lawyer, and currently heads the Asia Justice Coalition secretariat. She previously worked at the UN International Criminal Tribunal for the Former Yugoslavia, the Red Cross, and has a doctorate in international law. The views expressed are personal.)