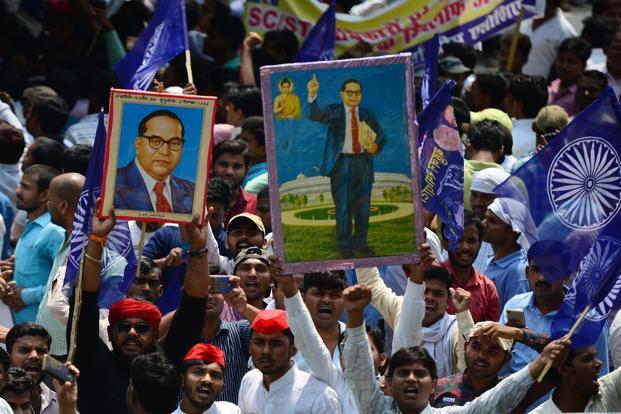 The apex court has refused to stay its judgement that revised the provisions of the SC/ST (Prevention of Atrocities) Act, 1989, the protection provided under the Act previously.

Jyotiba Phule referred to the caste system as the “inherited slavery” in his manifesto titled Gulamgiri, which aptly critiqued a system of institutionalised oppression that has been carrying on in the Hindu society since time immemorial. It is historically undeniable that Scheduled Castes and Scheduled Tribes in the Indian subcontinent have been exploited, degraded and dehumanised by members of the Hindu upper castes for centuries. The recognition to their right to dignity and equality in opportunity found its acceptance only in the last 150 years, particularly after the advent of written Constitution of India, in 1950, under the visionary leadership of Dr BR Ambedkar.

However, despite this we are far from achieving even a semblance of equality in this sphere. There continues to be a chasm between the haves and the have-nots which in this case are the Scheduled Castes and Scheduled Tribes. This is visible from the denial of the gravity of the atrocities that continue to be committed against these communities by those in power. Stringent protective legislation such as the Scheduled Castes and Scheduled Tribes (Prevention of Atrocities) Act, 1989 (hereinafter SC/ST Act) was seen as integral to protect a historically oppressed community.

A lack of understanding of ground realities of caste-based prejudices was evident with the judgement delivered  by the Supreme Court bench on March 20, interpreting the provisions of the SC/ST Act, 1989, so as to require  prior approval before any criminal complaint is registered by the police The Supreme Court on Tuesday (April 3) in an open court hearing of the review petition filed by the Central Government refused to stay the judgement. There have been massive protests across the country following the judgement which resulted in as many as nine deaths.

On March 20, a two-judge bench of the Supreme Court – comprising Justices AK Goel and UU Lalit – laid down “procedural safeguards” so as to prevent the misuse of the of SC/ST Act, 1989 in the case Dr Subhash Kashinath  Mahajan v State of Maharashtra. The question that was framed in the appeal was “Whether any unilateral allegation of mala fide can be ground to prosecute officers who dealt with the matter in official capacity and if such allegation is falsely made what is protection available against such abuse.”

The question did not arise on the facts of the case, since the HC had clearly held that the FIR makes out a case and the only question that did arise was whether the HC was wrong and needed to be reversed on appeal.

“What is interesting is that this was the same bench which had passed the judgement in the case of Rajesh Sharma v. State of Uttar Pradesh in July last year, expressing concern over the misuse of the anti-dowry legislation given under Section 498A of the Indian Penal Code. The bench in that case provided “safeguards” to prevent “misuse” of this provision of the IPC alleging reasons of harassment by married women. There seems to be a rather worrisome pattern developing of upholding the status quo by rewriting the provisions of legislations which protect marginalised communities.”

The appeal in the Supreme Court in the case of Dr Subhash Kashinath was against an order passed by the Bombay High Court on May 5, 2017 which refused to quash the FIR lodged against appellant Dr. Subhash Kashinath Mahajan for offences under the SC/ST Act, 1989. The question of whether the complaint of the complainant was needed to be quashed, which could only be done if there was no case in law on the face of the FIR, was the only question which came up before both Courts.

One of the contentions against the provisions of the Act was that several offences depend solely on the version of the complainant on an untried unilateral version, without any verification or tangible material, which is against the fundamental rights guaranteed under the Constitution. Reference was made to Section 41(1)(b)of the CrPC which stated that arrest could be effected only if there was “credible” information and only if the police officer had “reason to believe” that the offence had been committed and that such arrest was necessary. It was contended that the power of arrest should be exercised only after complying with the safeguards intended under Sections 41 and 41A CrPC.

The need for such stringent protective legislation was in accordance with Article 46 of the Constitution which enables the state to promote with special care the educational and economic interests of the weaker sections of the society, in particular, the SCs and STs, and to protect them from social injustice and all forms of exploitation due to the disadvantaged position in society that is held by these communities.

The amendments brought into the SC/ST Act in 2015 were indicative of continuing prevalence of the caste malaise in society and the need to provide even more stringent measures. Under the 2015 Amendment, several new offences of atrocities were included such as preventing the SC/ST community from using common property resources, entering any place of worship that is open to the public, entering an education or health institution. The onus to prove that he was not aware of the caste or tribunal identity of the victim was on the accused. Therefore, the aim of such legislation was to correct an existing wrong in society by providing stringent protection.

The appellant was granted anticipatory bail by the Bombay High Court; however, as “safeguards” against false implications the Court discussed the legal validity of Section 18 of the Act which excludes Section 438 CrPC, granting anticipatory bail to an accused, on the basis that it violates the constitutional mandate under Articles 14 and 21 and is ultra vires. In the case of State of Madhya Pradesh v. Ram Kishna Balothia the Supreme Court held that non-applicability of provision of anticipatory bail under Section 438 CrPC in accordance with the provisions of the SC/ST Act 1989 was not violative of Article 14 and 21 of the Constitution. It was held that Section 438 CrPC does not form part of an integral part of Article 21 and cannot be claimed as a matter of right. Hence, this was not an issue in the case.

“It was submitted by the Appellant that the SC/ST Act, 1989, is also prone to misuse on account of “monetary incentive” being available merely for lodging a case under Rule 12(4) of Scheduled Castes and Scheduled Tribes (Prevention of Atrocities) Rules, 1995. The “monetary incentive” so referred to in this provision is the immediate compensatory relief provided under the rules to victims who have suffered caste based violence. It is rather appalling that such compensation has been given the tag of being a “monetary incentive” that is being exploited.”

The judgement holds that in the absence of any other independent offence (not including those offences included under this Act) calling for arrest, if an accused person is a public servant, no arrest may be effected without written permission of the appointing authority and if not a public servant, without written permission of the Senior Superintendent of Police of the District.  It was also stated that such permissions must be granted for recorded reasons which must be served to the person to be arrested and to the concerned court and to avoid false implication, before FIR is registered, preliminary enquiry may be made whether the case falls in the parameters of the Atrocities Act and is not frivolous or motivated. This provision once again undermines the legislation that aimed to provide protection to a vulnerable community.

The judgement provided guidelines in order to prevent arbitrary and false arrests as the law itself is silent on punishment for mala fide complaints. However, as was indicated in a recent letter written by P.S. Krishnan to the Union minister for social justice and empowerment, additional solicitor general Maninder Singh the punishing of members of the SC and ST community for false implication would be against the spirit of the Act and would deter victims to come forward with their complaints.

The judgment cited National Crime Records Bureau (NCRB) data and various High Court decisions and Parliamentary standing committee report asserting the number of acquittals of offences under this act indicate the “need to safeguard innocent citizens against false implication and unnecessary arrest for which there is no sanction under the law which is against the constitutional guarantee and law of arrest laid down by this Court”.  It was said that almost 15-16 % of the total complaints filed in 2015 were false, and out of the cases disposed, 75 % cases resulted in acquittal/withdrawal.

P.S. Krishnan’s letter indicated that ASG Maninder Singh failed to communicate that the Centre had rejected the recommendation of the Parliamentary Standing Committee in this regard because the acquittals of the accused do not mean that the cases were false. The acquittals usually meant that a factually true account of the atrocity could not be provided in the court because of poor investigation or witnesses turning hostile on account of the absence of adequate protection for them.

“Additionally, the NCRB data for 2015 and 2016 showed that the number of crimes reported against Dalits had risen from 38,670 to 40,801, with Uttar Pradesh, Bihar and Rajasthan heading the table of states with most instances of crimes against Scheduled Caste people. Over the last ten years (2007-2017), there has been a 66% growth in crimes against Dalits. Further, data from the National Crime Record Bureau (NCRB) shows that the rape of Dalit women has doubled in the last 10 years.”

The NCRB data of crimes against SC/ST (PoA) Act, as revealed in its 2017 annual report, reveals that that while in 2014 the number of cases were 40,401, they had dropped marginally by 4.3% to 38,670 in 2015, but had risen by 5.5% to reach 40,801 in 2016. It had covered the sections pertaining to abuse and criminal intimidations, which were mostly invoked in complaints against officials and staff members, under the “other IPC crimes”.

The continuing prevalence of rampant caste-based violence can be seen through the number of instances that took place last year. On May 5, 2017, a mass attack on Dalits took place in Shabbipur village, Saharanpur. One person was killed and 15 people injured in clashes between Dalits and upper caste Thakurs. On September 30, 2017, five Dalits were assaulted in a Vijaya Dashami procession in Belur Taluk, Karnataka. On October 1, 2017, a 21-year-old Dalit man was allegedly beaten to death by a group of men belonging to the upper caste Patel community for attending a garba event. There have also been instances of targeted violence against the Dalit and Muslim communities in the name of cow vigilantism perpetrated by members of the “upper caste” Hindu communities. This issue of mob violence targeting minority communities has been taken up in a petition in the Supreme Court in the case of Tehseen Poonawala v Union of India[1].

The aim of the legislation when it was drafted was to provide maximum protection to a vulnerable section of society and create a societal structure that encourages, enables them to report the targeted crimes committed against them. The judgement by way of introducing the possibility of contempt being issued as disciplinary action for misreported cases would only prove to further alienate this community and allow the continuing domination of the ugly and ubiquitous caste system in our society.

Ankita Ramgopal is Legal and Advocacy Officer at Lawyers Collective.