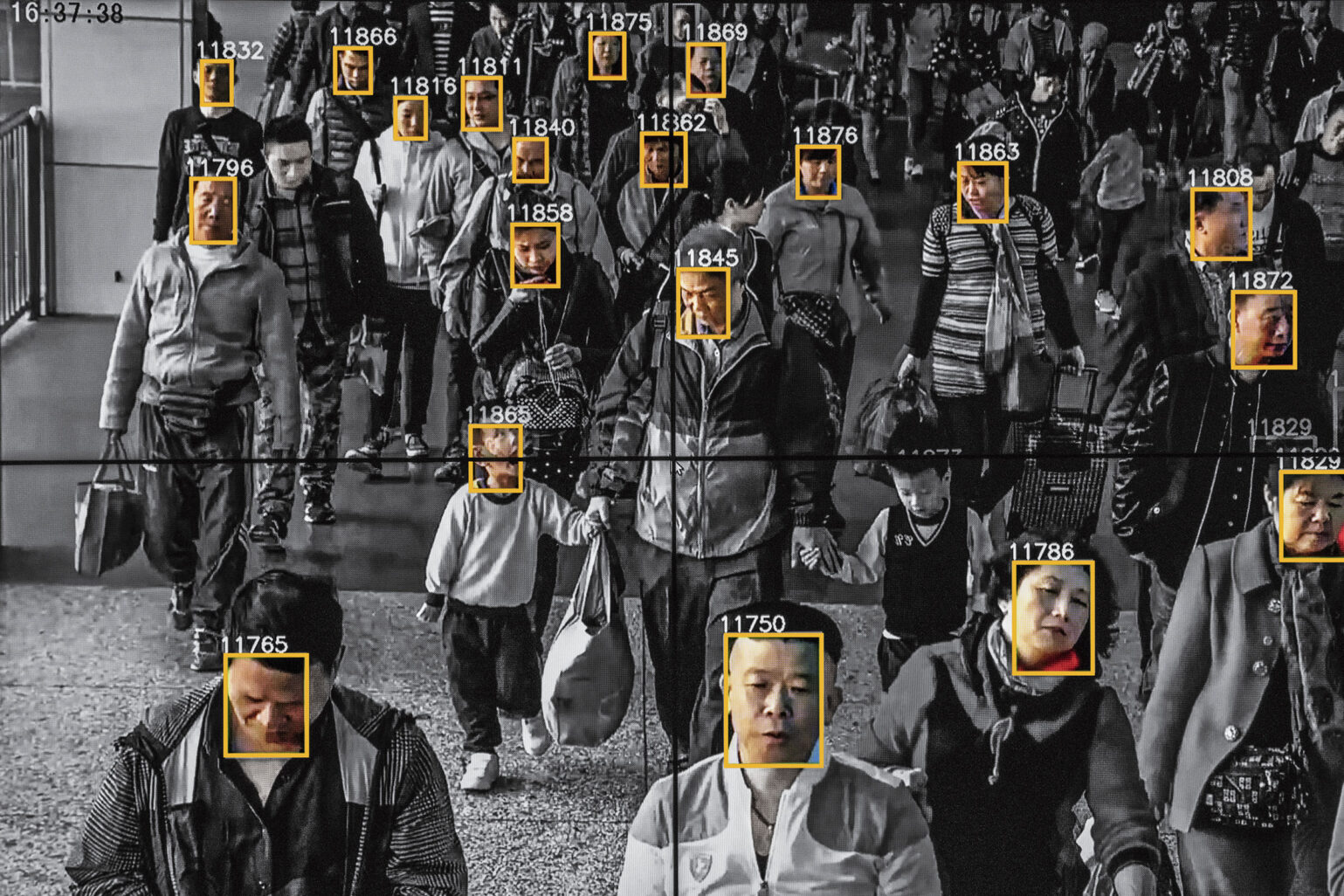 Monitors display a video showing facial recognition software in use at the headquarters of the artificial intelligence company Megvii, in Beijing, May 10, 2018. Beijing is putting billions of dollars behind facial recognition and other technologies to track and control its citizens. (Gilles Sabrié/The New York Times)
Constitutional LawDemocracy and Rule of LawFundamental RightsLaw & TerrorismLaw and CitizenshipLaw and TechnologyRight to PrivacyRule of Law

The nature of the state has transformed in an era of technology driven impetus to security, and vice versa. It engages in profiling and characterizing citizens on their value to the state. It is the treacherous slope, of who imposes its will on whom in a democracy, as it begins to mimic a police state. In this scenario, the author interrogates the ‘welfare’ nature of the state, where does the state hold value for citizens or do citizens hold value for the state?

Bentham’s Panopticon suggested a prison where the concept of the design is to allow all prisoners of an institution to be observed by a single security guard, without the inmates being able to tell whether they are being watched. Foucault takes a step further and suggests that modern society is a panopticon. He says, “Prison is not unique. It is positioned within the disciplined society, the society of generalized surveillance in which we live.” “What is so astonishing,” he asks, “about the fact that our prisons resemble our factories, schools, military bases, and hospitals-all of which in turn resemble prisons?”

As per the social contract theory, society is comprised of contracts where the people are contracted with each other to form a ‘civil society’. This contract further gives rise to the sovereign power representing the ‘state’. But what comes to our minds when we think of the word ‘state’? There are three connotations that the word has – firstly, the Government (S1); secondly, the people of a nation (S2) and thirdly, the state and the order of things (S3). The state in S3, derived from the Latin word status, hence represents the conditions and the circumstances It is no surprise that S1 and S3 are homonyms, as the Government control the state and order of things.

A Dystopia too Real?

In one of the Black Mirror episodes, there is a world in which we rate everyone, and everyone has a social rating. This rating assigns a value to a person on the basis of their credibility, according to which people can avail benefits. This system,  minus the dystopic element (which only time can reveal), has come to life in China. Starting from this year, the citizens of China would be rated by the Government on the basis of their credibility as citizens. From dating to healthcare to education, people with better credit can avail better services. Sounds too meta?

One of the most notable facets of this system is the freedom of movement. The system intends to “allow the trustworthy to roam freely under heaven while making it hard for the discredited to take a single step”. Thus, the person’s ability to move freely is based on their government’s allotted credit and rating. People with low ratings have been barred from travelling. All this has been aided by around 200 million CCTV cameras around the country.

In Homo Deus, Harari argued that humanity has aimed to eradicate hunger and has been virtually successful in doing so as a species. Humanity would next aim to eradicate disease completely and thus increase longevity. The ‘law of nature’ thus appears to be based on survival, as also suggested by Hobbes in Leviathan. Harari also observed that once we are done with these two, humanity will seek to maximize happiness (which is Positivist in nature).

“This positive law seeks to achieve the “greatest happiness for the greatest number”.”

Lest we forget, that man is also nature, and nations are man made. Thus, the law of man, as Hobbes says, is also natural law, and the law of nations is the law of nature. Thus, it is like a space ship with different pods leaving the atmosphere, and upon entry into space, the first pod of natural law leaves the spacecraft, and then the second pod of positive law (which is the second leg of natural law) thrusts forward into space. This positive law seeks to achieve the “greatest happiness for the greatest number”.

Surveillance for Welfare of unwilling Citizens

Some years back, the High Court of Delhi allowed the Delhi Police to use facial recognition technology to track missing children. However, as mentioned on the website of Delhi Police, the technology is now used “in the surveillance and detection of suspects”. This has come a long way from tracking missing children to tracking suspects. This has come an even longer way, as the National Crime Records Bureau (NCRB) has floated a request for proposal for an Automated Facial Recognition System.

All this seems to be an erosion of privacy in the name of public order and security of the nation i.e national security – domestic and international. In such technologies, there is no consent of the public because such actions are taken in national security. The notice to the citizen of being under CCTV surveillance is one way, and there is no way to opt-out. Even in the Personal Data Protection Bill, under Section 35, the Government is considering exempting itself from the obligations under the Bill for the purposes of public order and national security.

“But what happens when the state does not require the citizens to decide what is best for the citizens? It becomes self-regulating.”

So the question then arises- if the state is regulating the citizens, but who regulates the state? The answer is obvious – the citizens. But what happens when the state does not require the citizens to decide what is best for the citizens? It becomes self-regulating. India is a welfare state. But the question is – can welfare be imposed? When the technology is in public interest then can it be imposed, without the consent of the citizen? It certainly can. As it is the Government that gets to define ‘welfare’ and the ways of delivering it. Like the Government force feeding a citizen who wants to fast until death.

“When the technology is in public interest then can it be imposed, without the consent of the citizen? It certainly can.”

The Good and Bad Citizen

What the deployment of such technology strives to do is create a policed state, to classify citizens on the basis of their ‘criminality’ and thus to bar them from exercising their fundamental rights, such as freedom of movement. This is clear from the spate of cases under UAPA put on citizens in the wake of protests around the country against the State. What this also does is put out an example for other citizens as to who is a ‘good’ citizen, and the thing is that the State gets to decide that too.

The system of China mirrors an already existing system, but the only difference is that it is quantified, as everyone has a social rating. The state is thus putting a value over each individual’s head, as states and markets merge so as to be indistinguishable, led by the aim of ‘value creation’ through maximum productivity. The state, thus, wishes to monetize each act and rate a citizen on the basis of their productivity. How much do we produce as a citizen, and add value to the system?

Further, if we are to see the Chinese example as a model, the Chinese plan to create a ‘social media’ of sorts, of this kind of social rating, wherein everyone can access and compare each other’s rating. There are at least two discernible criteria on which the citizens are being characterized – criminality and productivity. One could say the criteria are overlapping, as a criminal is not a ‘good’ citizen, and thus not productive. And a productive citizen is not a criminal.

All this boils down to the same – social credit. It is no surprise that there are reports of drone surveillance, heavy CCTV camera installation at public places, and video camera recording in India. All of these facilitate facial recognition technology. On the lines of what China has done, we seem to be profiling citizens on the basis of their acts, declaring ‘social criminals’, and thus, assigning unquantified social ratings to citizens. It is like a bad or good credit score given by Credit card companies, aided by technologies such as facial recognition.

“As this creates two classes of citizens – ‘good’ citizens, and ‘bad’ citizens. This bifurcation leaves no room for average citizens. “

So what we have with us is a surveillance set-up that solidifies class. This system acts as a regime for class rigidification, with little class mobility. As this creates two classes of citizens – ‘good’ citizens, and ‘bad’ citizens. This bifurcation leaves no room for average citizens. You are either a good citizen with a good rating – a citizen who is productive and a ‘national’, or a bad citizen – who is unproductive and an ‘anti-national’. More so, protesting is considered ‘anti-national’, and ‘habitual protesters’ and ‘rowdy elements’ are targeted for their criminality. All this, because the self-regulating, self mutating state decides what welfare is. We have before us a social system – akin to a spacecraft, whose pods, fall one by one, to leave the ‘best’, ideal citizen before us.

“All this, because the self-regulating, self mutating state decides what welfare is. We have before us a social system – akin to a spacecraft, whose pods, fall one by one, to leave the ‘best’, ideal citizen before us.”

We effectively have a police state, and what we are effectively doing is policing S3 – the state, the order. Combining all the data from various databases across the country, what we can create is the ‘one-true database’.  One that can ease in establishing whether we are a good citizen or a bad citizen, and pave the way to rank us (publically or not) on the basis of our credibility as citizens. Thus, by regulating the Public Order (S3), the Government (S1) controls S3. But the question remains – is the State – S1 (the Government) or S2 (the people)? Is it the governor or the governed? This question seems to be becoming obsolete and irrelevant as the two seem to be merging. It seems to be a paradox, but it is not.

Some citizens are playing the role of the state, and performing public functions – like building the National Health Stack. But the other citizens have no say at all – their consent is gone the moment they elect their leaders, the Government. But the question still remains – is the state a person or an abstract entity? “L’État, c’est moi” – exemplifies how the State can be a person. It can be personified into a person. Where there is a cult of personality, like in the case of India, maybe Shri Narendra Modi is the state.

So where does that leave us? I am reminded of George Orwell’s Animal Farm – and the classification into sheep, pigs, and dogs. The sheep would be the bad citizens, meekly following the dogs (the State) – while the pigs (the good citizens) feast, and live in luxury along with the dogs.

(The author is a penultimate year law student from Rajiv Gandhi National University of Law, Punjab. He is interested in Tech law and policy and Constitutional Law.)