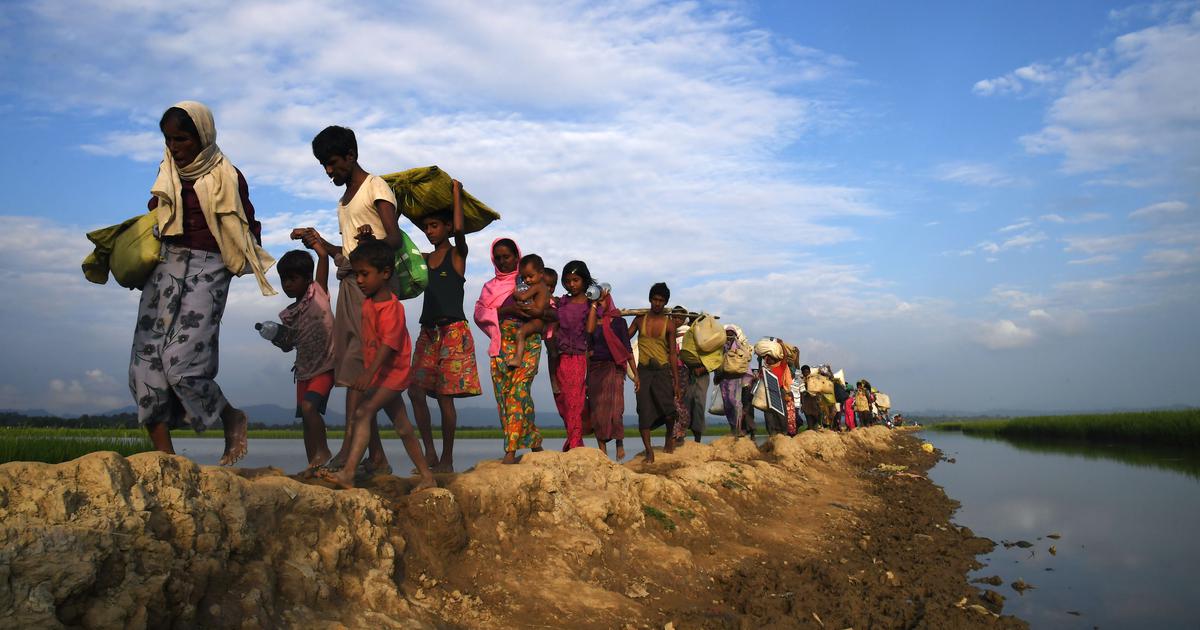 The lack of a domestic refugee protection framework has meant that India’s recognition and protection of refugees has been inconsistent and subject to political will and motivation. The treatment of the Rohingya in India once again draws attention to the need for a robust and uniform law for the protection of those fleeing persecution, writes GAURI ANAND.

THROUGHOUT its history, India has accepted refugees, including Jews escaping persecution, Sri Lankan Tamils, Tibetans, and Afghans, all escaping violence. However, India’s treatment of the Rohingya has been conspicuously different. The country is now home to approximately 40,000 Rohingya, of whom only around 16,500 have been registered with the United Nations High Commissioner for Refugees (UNHCR).

Last week, ten Rohingya who had been lodged at the Tezpur Central Jail in Assam appealed to the Gauhati High Court to either give them refugee status or to send them back to Myanmar. Arrested and jailed in 2014 for entering the country without valid documents, they have remained imprisoned for the last seven years. Saidur Rahman, Mahmadullah, and their respective families are from the Coundang village in Rakhine state, Myanmar.

While hearing the plea, Justices Kotiswar Singh and Malasri Nandy observed: “It has been submitted that the present petitioners are admittedly citizens of Myanmar who have been convicted for entering this country without proper documentation, and had served out sentences imposed by the competent court, and have been languishing in jail for the last seven years.”

The high court further said that “the authorities are not taking any decision in this regard and the petitioners are languishing in jail.”

The petition before the Gauhati High Court was first brought in 2017, at which time the counsel for the State were directed to inform the Court as to what they propose to do with the petitioners. In March 2020, the counsel for the State submitted that the Myanmar embassy was only able to identify the addresses of a few of the petitioners, and that it has requested that India provide new personal data forms with accurate information. Any repatriation can occur only following nationality verification by the Embassy of Myanmar.

Also read: India pushing back Rohingyas at its borders is a gross violation of rights

The Rohingya are a stateless Muslim Community originating from the Rakhine state in Myanmar. The heritage of the community traces back to East Bengal, now in Bangladesh. In the early 1990s, a quarter of a million people fled Bangladesh to Rakhine, in an event now called the “second exodus”. Myanmar does not recognize them as citizens or as one of 135 ethnic groups in the country, and treats them as illegal immigrants. UN Secretary General Antonio Guterres has on several occasions confirmed that the Rohingya are among the most persecuted ethnic groups in the world.

The Rohingya have been fleeing in waves as a result of ongoing violence by the military regime, which has faced allegations of genocide in a case at the International Court of Justice. In 1982, it enacted a law that denies the Rohingya the right to hold citizenship in Myanmar, even if their families have lived there for generations.

The situation has been aggravated further by the military coup that took place in the country in February this year.

The principle of non-refoulement

In March, following the coup, the UNHCR called on Myanmar’s neighbours to protect and offer refuge to people fleeing violence. The principle of non-refoulment prohibits States from removing individuals from their jurisdiction when there are substantial grounds to indicate that the person would be at risk of persecution, torture, or other serious human rights violations, upon return. It is an important protection, not only in human rights, humanitarian, and refugee laws, but is also recognized as part of customary international law, making it binding on States, independent of specific assent. The Office of the United Nations High Commissioner for Human Rights (OHCHR) has iterated that “the principle is characterised by its absolute nature without any exception.”

“The asylum state shall not return any refugee to a territory where his life or freedom is endangered due to his race, religion, nationality, or political alignment or opinion.”

Given that India is not a signatory to the Refugee Convention or the Convention on the Reduction of Statelessness, and since it has not ratified instruments such as the Convention against Torture and Other Cruel, Inhuman or Degrading Treatment or Punishment that stipulate conditions for non-refoulment, it maintains that it has no obligation to provide asylum or be bound by the principle of non-refoulment. However, as a signatory to the International Covenant on Civil and Political Rights (ICCPR) and the Universal Declaration of Human Rights (UDHR), it owes obligations to uphold human rights principles nonetheless.

The need for a refugee law in India

In the absence of a legal or administrative framework for the protection of refugees, persons from different countries are treated and protected differently. A dual system exists, wherein refugee status determination is divided between the government and the UNHCR. While the government determines the status of asylum seekers from neighbouring countries, the UNHCR conducts status determination for those from non-neighbouring countries and Myanmar at a single office in Delhi, as the body is not permitted to set up centres at the borders.

The Rohingya are a stateless Muslim Community originating from the Rakhine state in Myanmar. Myanmar does not recognize them as citizens or as one of 135 ethnic groups in the country, and treats them as illegal immigrants. The Rohingya have been fleeing in waves as a result of ongoing violence by the military regime, which has faced allegations of genocide in a case at the International Court of Justice.

UNHCR registrations afford refugees some protection against refoulement, arbitrary arrest, and detention, and allows them to access basic rights, services, and assistance. Countries that are not party to the Refugee Convention also often do not official recognise refugees registered with the UNHCR and exclude them from social security infrastructures. Refugees in India do not have a legal right to work, lack necessary documentation, and often work in the informal sector for low wages due to restrictions placed on employment without government-issued documentation.

Under Section 3 of the Foreigners Act, 1946, the government has the authority to prohibit, regulate, or restrict the entry of a class or description of foreigners. In the case of Mohammed Salimullah v. Union of India (2021) before the Supreme Court, using the provisions of this section, the government justified its decision to deport around 160 Rohingya who had been detained in Jammu. It argued that these persons were a threat to national security, without providing evidence to substantiate these claims. Despite observing that persons similarly placed as those being deported have been housed in refugee camps in many states in India, the Supreme Court accepted the grounds of national security and non-application of the non-refoulement principle, and allowed the government to deport the individuals, albeit under the condition that procedure prescribed for such deportation is followed. In doing so, the Court overlooked Article 51(c) of the Indian Constitution, which states that the State must endeavour to foster respect for international law and treaty obligations.

The judgement is also contrary to precedent involving jus cogens. Many past judgements of the Supreme Court, including those in Vishaka (1997) and NALSA (2014), emphasise that in the absence of a domestic law on a subject, international conventions and norms must be applied by municipal courts to ensure the dignity of human life. India’s lack of a domestic refugee law creates a void that must be addressed through international human rights and humanitarian law principles.

The Supreme Court has long acknowledged that the right to life under Article 21 of the Constitution is available to all persons living in the territory of India, and not just to citizens. It has on occasion also held that refugees cannot be repatriated until the situation in their home countries stabilises. In pursuance of the same, the non-refoulement principle has been recognised as a part of Article 21 by some high courts in India. In National Human Rights Commission vs. State of Arunachal Pradesh (1996), the Supreme Court extended, to a limited extent, the right to life and liberty to refugees.

The principle of non-refoulment prohibits States from removing individuals from their jurisdiction when there are substantial grounds to indicate that the person would be at risk of persecution, torture, or other serious human rights violations, upon return. It is an important protection, not only in human rights, humanitarian, and refugee laws, but is also recognized as part of customary international law, making it binding on States, independent of specific assent.

The State’s use of vague assertions of national security concerns to override accepted norms and principles to get its way and subjectively apply executive discretion is a matter of concern, especially when such action has the potential to deprive someone of their life.

Saidur and Mahmadullah’s right to liberty

Indefinite imprisonment goes against the right to liberty as a human right, extending beyond the boundaries of citizenship. Furthermore, the courts have acknowledged that Articles 19 and 21 are not watertight compartments, and that in “the vast sphere of personal liberty, the substantive as well as procedural laws made to cover them must satisfy the requirements of both Articles 14 and 19 of the Constitution.” The use of arbitrary and uncertain procedures to deprive a person of his life and liberty fails the tests of due process and does not fulfil the requirements of Article 21.

If India does not intend to grant refugee status to these Rohingya, it must undertake the administrative procedure to deport them, given that they have served out their sentences after being convicted of illegally entering India. It appears the sole purpose of the continued imprisonment of Saidur, Mahmadullah, and their families is administrative, and not punitive. Due process principles mandate that the nature and duration of punishment/detention/imprisonment be reasonably connected to the purpose of confinement; it is high time they were released.

The Supreme Court has long acknowledged that the right to life under Article 21 of the Constitution is available to all persons living in the territory of India, and not just to citizens. It has on occasion also held that refugees cannot be repatriated until the situation in their home countries stabilises.

With Myanmar maintaining that Rohingya are not citizens and Bangladesh claiming they are under no obligation to accept refugees sent by India, the deportation of these stateless persons has dangerous implications, especially given the military coup in Myanmar. That these individuals have had to submit a plea before the Court wherein they face the possibility of deportation, despite significant uncertainty about their future and grave risk to their lives, is a scathing indictment of the ineffectiveness of India’s internal administrative frameworks and commitment to human rights.

(Gauri Anand is an environmental lawyer and part of the research and editorial team at The Leaflet. The views expressed are personal.)