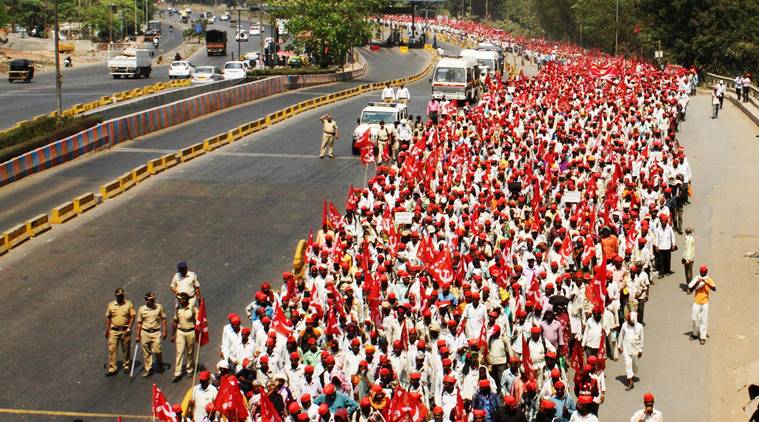 On the early morning of March 12, 2018, Mumbai witnessed a huge rally of 50,000 farmers. Some 10,000 farmers started the rally from a place near Nashik on March 6. Other farmers from Nashik, Palghar and Thane district joined the march. For six days, they walked 180 km, on foot, with the aim of shaking the apathy of the government; demanding their fair share in this fast ‘developing’ country.  All India Kisan Sabha (AIKS), Communist Party of India-Marxist (CPM) farmer’s wing, along with other farmer bodies organised the March.

The main demands were – to increase the Minimum Support Price (MSP) and other recommendations by the Swaminathan committee, implementation of Forest Rights Act, and loan waiver. The ruling dispensation of Maharashtra, led by the BJP, was fast to discredit the march as a “political gimmickry by the Left”, but eventually, Chief Minister Devendra Fadnavis, promised to implement these demands within six months.

Land rights for the Adivasis

A farmer is generally considered to have land, but a huge population in this march constituted of the Adivasis, the forest-dwelling communities and the landless tillers. They were demanding for the Forest Rights Act to be implemented, which inherently also meant the settlement of their land rights. This bought to the forefront a different edge to the agrarian crisis faced by rural Maharashtra and presumably other parts of the country.

The Adivasis in the country have been pushed to the margins through a historical process of alienation and dispossession. They have been structurally robbed, first by the colonial masters and then by the post-independent governments, from their land while branding them as encroachers in their own homes.  The Scheduled Tribes and Other Traditional Forest Dwellers (Recognition of Forest Rights) Act of 2006, famously referred to as the Forest Rights Act was passed to undo this historical injustice meted out to the forest-dwellers by helping them secure their traditional rights over their forest land and community resources.

The Forest Rights Act recognises that the State has infringed on the lands and rights of Adivasis, so restores it back to them. The Act recognises three kinds of rights: a) individual rights (homestead and cultivation); b) community rights over the resources of the forest (grazing, fuelwood, collection, ownership and disposal of Non-Timber Forest Produce); and c) rights to manage, conserve, protect and regenerate community forest resource areas.  It not only returns individual rights but also has provisions for community forest rights where the Gram Sabha has management rights, democratising forest governance.

FRA is hailed as one of the most progressive law in the country. It not only has the potential to secure the livelihood of roughly 200 million forest dwellers that are directly or indirectly dependent on the forest but also conserve forest and biodiversity. However, the spirit of the law, even after 12 years of implementation, remains a distant dream. Data from the Ministry of Tribal Affairs suggest that 41,78,320 claims (40,39,054 individual and 1,39,266 community claims) are filed out of which only 18,25,197 titles (17,60,869 individual and 64,328 community claims) are distributed until November 30, 2017.

According to a report by Community Forest Resources: Learning and Advocacy, a network of civil society fighting for the proper implementation of FRA, about 34.6 million ha or 45 percent of India’s total forest area, should be recognised as CFR, but only 99,85,108 ha has been recognised as CFR so far.  Even the limited implementation is asymmetrical in states and within states.

With the attempt to open up the large forest lands for multinationals and mining companies, the governments are trying to evade the Act for the easy acquisition of land.  The FRA empowers Gram Sabhas to preserve their habitat from “any form of destruction practice affecting the cultural and natural heritage” and empowers them to “stop any activity which adversely affects the wild animals, forests and biodiversity”. Ministry of Environment Forests and Climate Change (MoEFCC) issued a circular in 2009 explaining that before any action is carried out in forest land, along with the Indian Conservation Act of 1980, settling of forest rights and consent of the Gram Sabha is mandatory. However, most often the administration undermines the power of the Gram Sabha by using fraudulent means. Consent from false Gram Sabhas, and intimidating the locals, using both physical and mental harassment, to gain consent is not uncommon.

Nonetheless, many Gram Sabhas have used this provision to fight against the State and the multinationals, emerging victorious in varying degree. The historic victory of the Dongria Kondhs of the Niyamgiris, for resisting against the Vedanta’s mining company; gave a new life to the consent clause, when the Supreme Court, in 2013, ruled against the mining companies and stated that the consent of Gram Sabha is binding. From Rajasthan to Karnataka, from Madhya Pradesh to Maharashtra many Gram Sabhas have vetoed against corporate, multinationals and the government from entering into their land and homes.

The FRA has legitimised the Gram Sabha which has opened up spaces for the people to contest against the state and conglomerates. Many movements have sprouted across the country where the Adivasis are leading the movement armed with the Forest Rights Act.  It is not surprising to see the BJP, the ruling party, to introduce policies after policies, aimed at undermining the powers bestowed on the Gram Sabhas.

In 2016, Compensatory Afforestation Fund (CAF) Act, as the name suggests, the fund collected for compulsory afforestation to make up for the forest land diverted in accordance to the Forest Conservation Act of 1980, was passed despite protests. This Act aims to manage and distribute unutilised funds to the tune of Rs. 50,000 crores with the future annual flow of Rs. 6,000 crores. While the Bill was in a discussion in the Parliament, the BJP had promised that the forestation activities by the forest officials under this Act will be carried out in consultation with the Gram Sabha. This itself is a violation of the FRA and Supreme Court verdict which affirms that consent from Gram Sabha is compulsory to carry out any activity in the forest.

In the latest rules formulated by the government, it states that the plantation activity will carried out by the forest officals “taken up in consultation with concerned Gram Sabha or Van Sanrakshan Samiti (VSS) or Village Forest Committee (VFC) or any authority having jurisdiction over that area, as the case may be, and shall be in consonance with the provisions of the Scheduled Tribes and other Traditional Forest Dwellers (Recognition of Forest Rights) Act, 2006”.

The first problem is, the “consultation with the Gram Sabha” has been expanded to include VSS or VFCs which are generally the lackeys of the forest department in the name of Joint Forest Management. Secondly, the consultation clause has added only to a part of the fund. Further the rule states that if the plantation activities are “undertaken in the forest land under the administrative control of the Forest Department, then the said activities shall be carried out as per the working plan prepared under National Working plan Code”. This means that forest land yet not recognised under FRA will require no consultation.

Even before the rules came into being, there are many instances where the forest department has deceitfully planted commercial trees and fenced the area where title under FRA has been granted or the settlement under FRA is yet not complete.

Very recently, the union government has drafted a new National Forest Policy. It is similar to the earlier National Forest Policy of 1988 with minor changes. But, there is one glaring change to the earlier policy, if approved will allow public-private players “afforestation and reforestation activities in degraded forest areas and forest areas available with Forest Development Corporations and outside forest”. The consequences of this modification can be far-reaching, allowing for indirect land grab by the private companies.

Although vague on Forest Rights Act, the draft policy states, “as far as community forest resources management under FRA is concerned, the new policy will address the same under participatory forest management and the same will be addressed through the proposed community forest management mission.” If approved, the power vested in the Gram Sabha will be snatched. The earlier experiences of Joint Forest Management (JFM) revealed the asymmetrical power relationship between the locals and the forest department which led to the further exploitation of the former. It will be a huge blow for the already marginalised forest-dwelling communities.

The attempt to dilute the Right to Fair Compensation and Transparency in Land Acquisition, Rehabilitation and Resettlement Act, 2013 (also Land Acquisition Act, 2013) is another case where the government is revealing its identity as a stooge of the corporate. The devious means of acquiring land from the already marginalised and rendering them even more vulnerable brings back the question of what is development, who is benefitting from this development and at whose cost.

Save the progresive laws

The implementation of Forest Rights Act was a ray of hope for many. Many villages like the ones in Kalahandi district in Orissa to Panchgaon village in Chandrapur district of Maharashtra have recorded a huge improvement in the livelihoods of the locals. Proper implementation of community forest rights has led to reverse migration in some places like Panchgaon. There are many success stories across the country.

However, today the future of the 200 million forest dwellers is precariously balanced between citizenship and subject-hood, between undoing historical injustice and further disenfranchising them. History suggests that even the colonial masters had to fix their ways in the wake of tribal uprisings for their jal, jangal, and zameen. Today, it was the 50,000 farmers who peacefully walked with their blistered feet and broken bodies. Tomorrow it will be 200 million if the so-called representatives don’t mend their ways.

Kritika A is a student at Government Law College, Mumbai University.