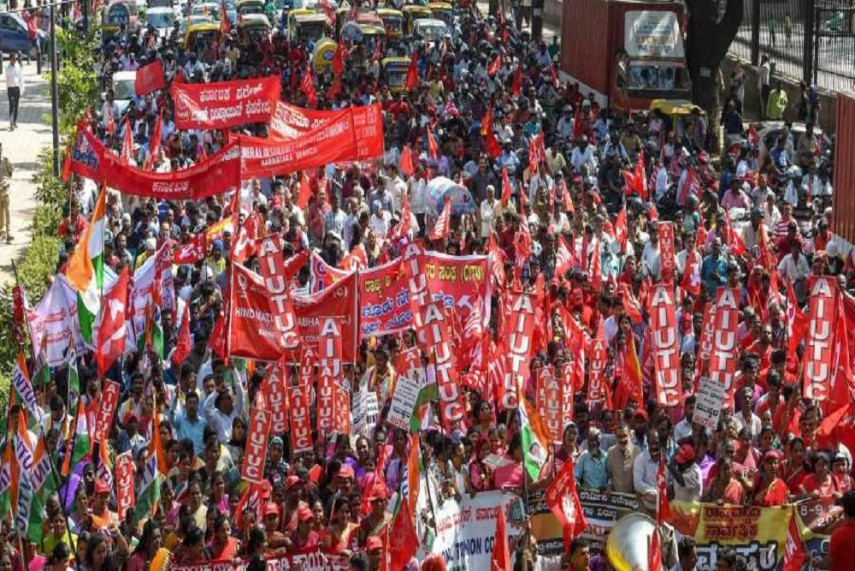 The government has been consistently chipping away at the  workers rights and livelihood, writes Sukumar Damle

The Central Government passed three Labour Codes on September 23, 2020, on Industrial Relations, on Social Security and on Occupational Health & Safety, while the entire opposition had boycotted Parliament in protest against suspension of eight opposition Rajya Sabha MPs. This suspension itself was on the pretext of their “unruly behaviour”, when the government bulldozed Agricultural Laws through the Rajya Sabha, brushing aside the opposition’s demand for a vote, on September 21.

The entire exercise was in blatant violation of democratic parliamentary procedures.

Both the legislations are pro-corporate. They are anti-worker and anti-farmer. The New Education Policy and the Electricity (Amendment) Bill have not even been placed in Parliament and yet they are being pushed for implementation through the BJP state governments!

The entire trade union movement has been opposing the Centre’s plans to enact the so-called labour codes, allegedly to simplify 44 “complex” labour laws. (In the final count, 29 labour laws have been subsumed into the four labour codes, the Code on Wages having been passed last year). The all-India strike of January 8, 2019 and repeated joint demonstrations, even during the lock-down period, are a testimony to this fact.

The government has not confined itself to enacting labour codes alone.

It formed an Expert Committee on Determination of Methodology for Fixation of National Minimum Wage and came up with a figure of Rs 9,750 pm as of July 2018. This is when the 7th Pay Commission had recommended Rs 18,000 per month as the minimum wage as of January 1, 2016. Similarly, Fixed Term Employment was introduced by amending Industrial Employment Standing Orders, making permanency of employment a thing of the past.

It meekly withdrew its own advisories not to terminate workers or to cut their wages during the lock-down, when challenged in the Supreme Court. Instead, it made money under an opaque PMCARES Fund, arm-twisting government employees and PSUs to contribute to it. Moreover, Dearness Allowance and Dearness Relief of pensioners were withheld till July 2021.

These profit-making PSUs contribute as much as Rs 3.68 lakh crores to the exchequer in one year in the form of dividend, interest, corporate taxes and GST (2018-19 figures). They help generate employment with reservation to provide equal opportunity to backward communities, balanced regional development and so on.

This year, in September, it changed the base year of Consumer Price Index for Industrial Workers from 2001 to 2016, in opposition of the position of the central trade unions. This in effect lowered the compensation to industrial workers by increasing prices of consumables. It has not held any Indian Labour Conference since 2015, thus practically doing away with tri-partism.

Besides, the central government has been on a selling spree.

Profit-making public sector entities are being sold and privatised: Bharat Petroleum Corporation Ltd (BPCL), Container Corporation of India (CCI), Shipping Corporation of India (SCI), JNPT, LIC, banks, railways (stations, tracks, production units etc.), 41 ordnance factories, coal mines, airports and so on. One minister is on record saying: “We will sell whatever can be sold and sell even that which cannot be sold.”

These profit-making PSUs contribute as much as Rs 3.68 lakh crores to the exchequer in one year in the form of dividend, interest, corporate taxes and GST (2018-19 figures). They help generate employment with reservation to provide equal opportunity to backward communities, balanced regional development and so on.

A closer look at the modus operandi used exposes the anti-national character of the move: for example, BPCL, which was formed by nationalizing Burmah Shell Company in 1976, because it refused to supply aviation fuel to the government at the time of Bangladesh conflict, with present assets worth Rs 9 lakh crores, is sought to be sold for Rs 60,000 crores – to Mukesh Ambani! The ordnance factories, which are like the second line of defence, are sought to be corporatised and then privatised, with 100 percent Foreign Direct Investment (FDI) already allowed.

How is handing over of defence industry to private players, who are profit hungry, in national interest?

Public Sector Banks have deposits worth Rs138 lakh crores, which can be an engine of growth if used judiciously. It is the savings of the people. But Non Performing Assets (NPA) have ballooned to Rs7.27 lakh crores, out of which Rs1.47 lac crores is due from 2,426 borrowers, who are termed as “willful defaulters” by the RBI, that is who have the capacity to repay, but deliberately do not. This is loot of the public money.

Money should be recovered from them under Section 420 of Indian Penal Code. Instead, the government is thinking of merging and then privatizing the PSU banks, giving up the financial clout to initiate planned growth. Even health, education, transport is being privatised.

Thousands of schools are being merged on the plea that the number of students in each school is too small, without a second thought as to how small children will go to far-off schools, when the neighbourhood school gets shut down.

The overall effect of government policy of demonetisation in November, 2016, increasing indirect taxes like GST, tax on petrol-diesel and reducing the direct corporate taxes (from 35 percent to 25 percent in September, 2019) is increasing the gap between the rich and the poor so much that the overall demand is reduced, leading to economic slowdown and consequent high unemployment.

But Non Performing Assets (NPA) have ballooned to Rs7.27 lakh crores, out of which Rs1.47 lac crores is due from 2,426 borrowers, who are termed as “willful defaulters” by the RBI, that is who have the capacity to repay, but deliberately do not. This is loot of the public money.

The government’s argument that the slow-down of economy is due to COVID-19 pandemic is false. The slowdown signs were already there as early as in August-September, 2019, when nobody had even heard of Corona virus.

Economists are saying that the way out is to put money in the hands of the poor to boost demand and get the economy running again, but the government mulishly refuses to take these steps. It instead keeps announcing loans for the corporates on easier terms, selling PSUs wholesale and so on. This has led to a fall in GST collection, leading to the states not getting their share of funds to run their affairs.

The economy is in a terrible shape. The sudden, unplanned lockdown only worsened the situation and pushed the migrant workers into untold misery, contracted the GDP as never before and shot up unemployment to 23 percent!

The entire trade union movement has been demanding payment of Rs. 7500 per month, free food grains without insisting on any IDs, to all people who fall outside the income tax net, increase in the days of employment under MGNREGA to 200 per year with increase in the rate of minimum wages to Rs.600 per day, social security for all with pension and free health care and no discrimination on the basis of caste, creed, sex, colour, religion or region. (IPA)

(Sukumar Damle is leader of All India Trade Union Congress. Views are personal.)