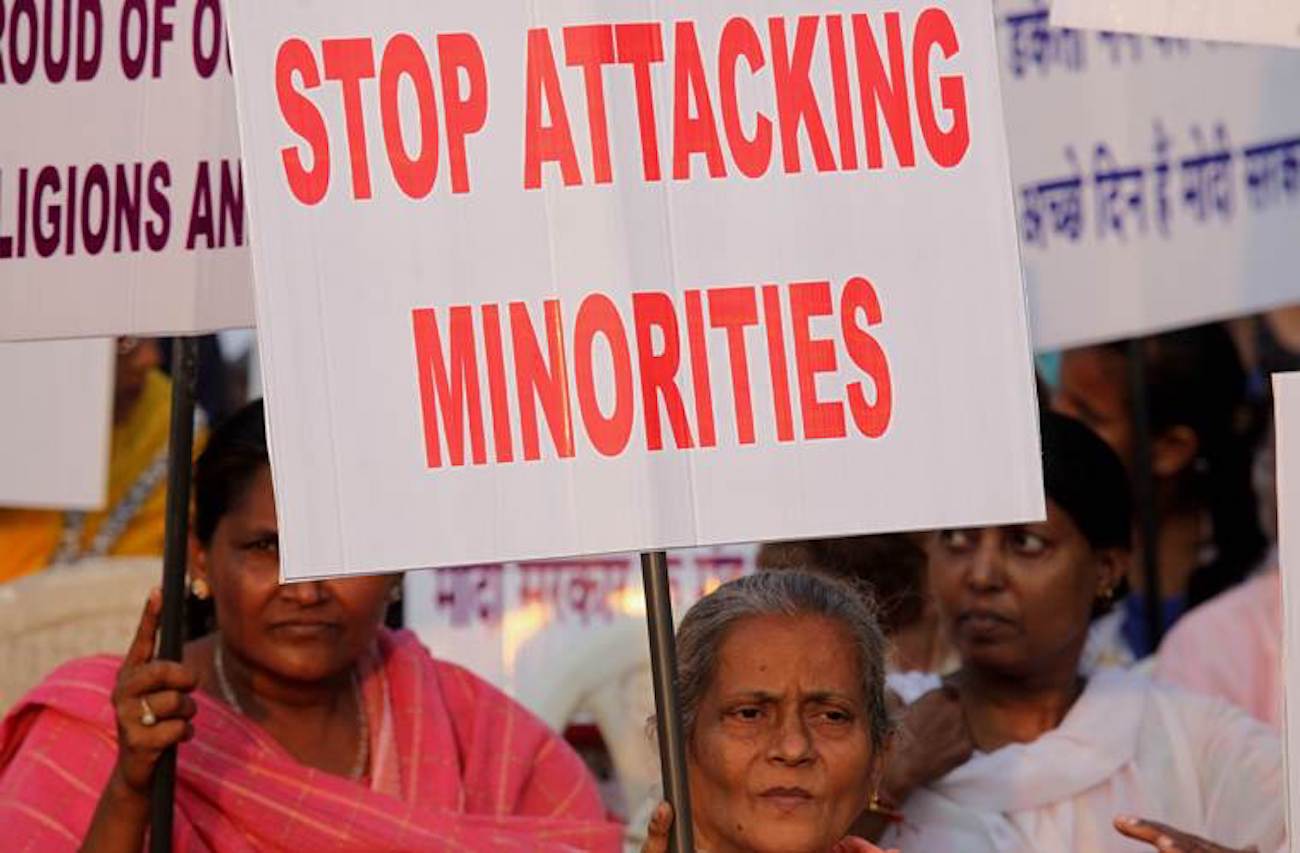 The criminal justice system in India vis-a-vis the minority rights, especially of the Muslims, Christian and the ethnic communities in the Northeast, is in virtual collapse. Members of these communities are being implicated in false cases, tortured and ill-treated. So what can be done? Here's a check-list.

[dropcap]M[/dropcap]INORITY rights in India’s criminal justice system (CJS) are in dire straits as revealed graphically in January 2018, in the horrific abduction, gang-rape rape and murder in a Hindu temple, of the eight-year-old girl child of the minority Muslim community at Kathua in Jammu & Kashmir by some elements associated to the ruling Bharatiya Janata Party (BJP). The ruling party leaders have tried to downplay the seriousness of the incident.

The persisting violence and crimes against the minority Muslim, Christian, Sikh and ‘national or ethnic minorities’ (UN terminology) in the Northeast of India poses a challenge to India’s criminal justice system.

The issue came up for serious consideration at the 8th session of the UN Forum on Minority Rights in the Criminal Justice System (CJS) at Geneva (November 23-25, 2015).

The report of the UN Special Rapporteur Rita Izsak-Ndiaye on the subject was presented to the 70th Session of the UNGA.

As an expert invitee, the present writer made presentations at the four sessions of the UN meet. A summary is below:

Aspects of the crisis

Also read: Make lynching a crime against the Constitution

The Constitution of India, 1950, does not define minorities. It only refers to ‘minorities’ and speaks of minorities based on ‘religion and language’.  Their rights are spelt out in Part III on Fundamental Rights, which are legally enforceable. Part IV provides the Directive Principles of State Policy, which are not enforceable by law.

The government of India set up a National Commission on Minorities in 2005, which mentions five religious Minorities: Muslims; Christians; Sikhs; Buddhists; and Zoroastrians. The Jains were added in 2014.

The UN Declaration of 1992 mentions ‘National or Ethnic, Religious and Linguistic Minorities’.  This is a comprehensive phrase which goes beyond the category of the six religious minorities mentioned by the National Commission on Minorities in India. It is necessary for India to adopt a comprehensive term and include national, ethnic and linguistic minorities. The Constitution of India needs amendment to take into account the violence especially against the Muslim minority that has been going on for a long time and has intensified recently. There is also increasing violence against other minorities such as the indigenous communities in central and Northeast India, which are not included in the approved list of the National Commission for Minorities.

The Constitution of India, 1950, in view of the existence of a multiplicity of minorities in India including national and ethnic minorities and in view of the conflicts that are emerging from identity assertions across the country, must revise the definition of the term ‘minority’ and enumerate the categories including religious, linguistic, national, ethnic minorities. The Constitution must also incorporate specific provisions for the protection of minorities from all forms of violence and provide them justice and fair play in the criminal justice system.

The Preamble to the Constitution of India declares India to be a ‘secular’ state (this is of special relevance to religious minorities) and to secure to all ‘liberty of thought, expression, faith and worship and equality of status and opportunity.

Significant for the minorities is the elimination of inequalities ensuring their welfare as for the weaker sections (besides the Scheduled Castes and Tribes). It should be the duty of citizens to promote the promote harmony and the spirit of common brotherhood transcending religious, linguistic, regional or sectional diversities and preserve the country’s rich heritage and composite culture.

The Fundamental Rights in the Constitution, include, among other things, equality before the law; equal protection of the law; prohibition of discrimination on grounds of religion, race, caste, sex or place of birth; freedom to profess, practise and propagate any particular religion; freedom of religious instruction and worship etc. These are essential for a multi-religious, multi-cultural, multi-racial Indian society such as India with communal harmony.

The Muslim, the Christian and Sikh minorities have been victims of extrajudicial executions, torture, rape, intimidation, and implication in false cases, destruction of property and utilities and other illegal acts under the criminal justice system. Non-listed minorities in the North-eastern region too have been subjected to similar abuses.

The Sikhs were subjected to genocidal killings after some members of the Sikh security forces assassinated former Prime Minister Indira Gandhi in protest against the killing of Sikhs during and after Operation ‘Blue Star’ in 1984. The genocidal killings of the Muslims in Gujarat in 2002 and the attacks on Christians in Kandhamal, Orissa in 2008, also violated the norms of the criminal justice system.

There are no specific protective legal provisions for the minorities in the Indian Constitution. Police, prosecution and the judiciary are not sensitised to minority issues and function within the existing framework of law and order.

International principles and standards on minority issues are yet to be incorporated in the Indian criminal justice system.

Also read: Calling it what it is: Why India desperately needs a law on ‘lynching’

Minorities in the exercise of police powers

The Justice Rajinder Sachar Committee Report 2005 is the first of its kind in India that provides insights into the socio-economic and security issues facing the Muslim-minority constituting 13.4 percent of the population. Muslims are the biggest chunk of the Indian minorities.

Also read: With ‘lawmakers’ like Ministers Mahesh Sharma and Jayant Sinha, can lynching victims ever get justice?

Demands of the minorities in the criminal justice system

The new anti-terrorist politics have encouraged the devaluation of the criminal justice system and its perversion resulting in the prosecution of innocent Muslims, not involved in terrorist activities, are falsely implicated by the police in such cases in order to obtain government recognition and rewards. The functioning of the criminal justice system (CJS), now jocularly termed ‘criminal administration of justice’ is in crisis! Far from getting any specialised attention and protection, the minority communities especially the Muslims in India are targets of police harassment for allegedly ‘terrorist’ activities.

This problem is clearly brought in a study, which documents registration of false cases against innocent Muslims (and ethnic minorities from the North-east) are subjected to systematic police harassment, cruelty and torture and false criminal cases under special security legislations involving prolonged imprisonment and more (see: ‘Framed, Damned, Acquitted: Dossiers of a very Special Cell, A Report by the Jamia Teachers Solidarity Association, New Delhi, 2015)

In the Criminal Procedure Code, 1861 (CrPC) has chapters on security for keeping the peace and maintenance of public order including use of force by the police, which take precedence over the investigation and trial of criminal offences.

The Police Act of 1861 prioritises collection of political intelligence. The prevention and investigation of crime is only from section 23. Provision for punitive policing. Police officers are vested with vast powers and even the constabulary vested with vast powers.  The persistence of repressive colonial laws has contributed to the unpopularity of the police.

In 1856, the British had said: “the Indian police are all but useless for the prevention and sadly inefficient in the detection of crime; unscrupulous in the use of authority they had a generalised reputation for corruption and oppression”.

David Bayley, a leading authority has said: ‘police officers are preoccupied with politics, penetrated by politics and participate in it individually and collectively.

There were multiple failures in the functioning of the police. They did focus on the Hindu fundamentalists who were the real culprits. They delayed imposition of the curfew; neglected criminal law and acted under political influence; their intelligence was poor; they facilitated and participated in the violence; neglected rape victims; allowed criminal Hindu mobs to have their way; they ignored recommendations of the National Human Rights Commission; failed to impose Disturbed Areas Act,1976 and Prevention of Damage to Public Property Act 1984; failed to follow laid down instructions of the central government on communal disturbances.

An independent fact-finding mission found glaring gaps in police investigations of the case of the brutal lynching of Pehlu Khan, a Muslim farmer, at Alwar in Rajasthan in April 2017.

The lynching had been carried out by a ruling party-oriented group of self-styled gaurakshaks (‘cow-protectors’) when the victim was returning home after purchasing cattle. Earlier in 2015 at Dadri in Uttar Pradesh, a farmer named Mohammad Akhlaq had been lynched by some gau rakshaks on suspicion of storing cow meat at home.

Police investigations in both cases revealed motivated doctoring of the evidence to enable the culprits to get off the hook and escape judicial scrutiny and punishment. Unusually, a central government minister of the ruling establishment took an active role in saving the culprits affiliated to the ruling party from coming under judicial scrutiny and punishment.

The ruling establishment not only remained silent but, in some cases, the guilty policemen were even lauded by the ruling elites.

Political mobilisation against the Muslims since the 1990s was articulated by the ruling establishment. It gathered strength and led to the demolition of the Babri Masjid in  1992; orchestrated violence against Muslim took place in Mumbai in 1992-93 followed by the apocalyptic violence in Gujarat, 2002.

Causes of discrimination in criminal justice

Lack of political will and non-implementation of recommendations made by several reforms Commissions are among the main causes.  Structural inequality and injustice in the social and political system too need mention. Muslims (13.4 percent of the Population) and Christian (2 percent of the population) and Sikhs (about 2 percent) are the primary victims of failure of the criminal justice.

The Rajinder Sachar Committee 2005 identified the special disabilities felt by the Muslims in India. In the name of fighting ‘terrorism’, Muslims are targeted by the police. The Christians and Sikhs are much smaller but are equal victims.

[Note: The author was a member of the Indian Police Service and former Director of the Research and policy Division of the Union Home Ministry in New Delhi. He was an expert invitee to the 8th Session of the UN Forum for Minority Rights at Geneva, (November 23-25, 2015).]