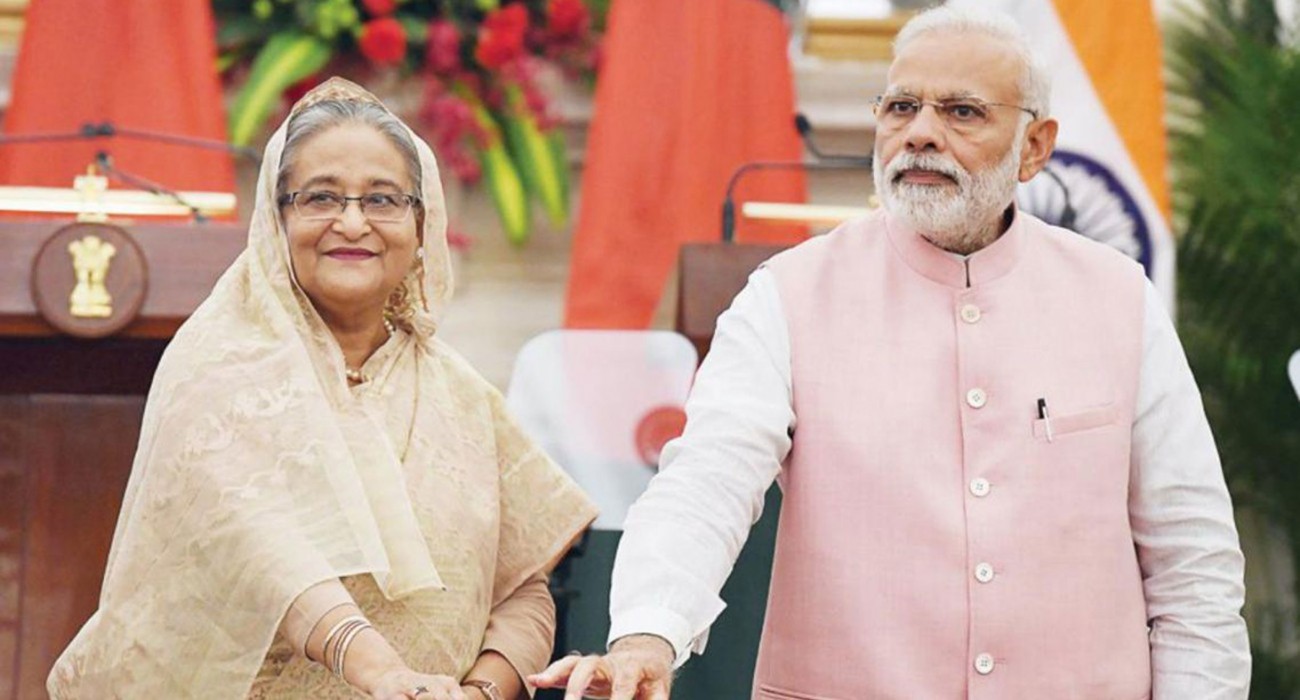 As Bangladesh develops and progresses in the coming years, India must consciously work to maintain warm bilateral relations. Patronising snubs and delayed action on contentious issues by New Delhi like water sharing has Dhaka searching for new allies in the region writes ASHIS BISWAS.

IN recent times, conducting Indian diplomacy in Bangladesh has steadily become a more ramified experience. Bangladesh’s response to bilateral issues has undergone a subtle change in the context of its deepening ties with China.

There has also occurred an easing of long term tensions between Dhaka and Islamabad. Further, Bangladesh is fast reducing its earlier reliance on India in its import trade and joint venture enterprises, a trait for which the Awami League invariably used to attract a shower of brickbats at home.

Today, an economically stronger Bangladesh is noticeably more assertive in taking major economic and political decisions without unduly worrying about Indian reactions as before. Recent examples can be cited in support of such a proposition. Before getting into specifics, it needs to be said that far more than official Ministerial statements made from Delhi or Dhaka, Bangladeshi newspaper editorials, correspondence in the letter to the editor sections and the stream of tweets on social media, are accurate indicators of the country’s mood and perceptions on most issues.

Even a routine scan of recent analyses and comments in Bangladeshi press or various panel discussions on its electronic media make it clear that India’s neighbour to its East has shifted to a more self-reliant mode on regional issues than before.

While Indian leaders do not exactly suffer from a foot-in-the-mouth syndrome while referring to the country’s Eastern neighbour, the big brotherly attitude unconsciously adopted by some people within the Indian political spectrum creates problems.

This has direct implications for India. It attests to the credit of India’s MEA establishment that it is trying to adjust itself to the new situation, but is not yet close to devising a suitable policy response.

The Cost of Snubs

It has been revealing while monitoring Bangladeshi press, to find how seemingly casual comments on bilateral matters made without any harmful intent by prominent Indians often negatively impact, even offend, collective sensibilities. The best (worst?) example that comes to mind is the stinging description as “termites” by Union Home Minister Amit Shah of suspected Bangladeshi infiltrators living illegally in Assam.

It is no exaggeration to say that this single unfortunately used word has caused major damage to bilateral relations and angered Bangladeshis far more than India’s dithering over Teesta water-sharing!

Sadly, it cannot be dismissed as a casual comment, although the pressures of conducting the Lok Sabha election campaign in 2019 in Assam might have been a factor. After all pre-election rhetoric should not be taken literally. The Foreign Office in Dhaka maintained a stiff upper lip without overreacting, but that did not stop local tongues from wagging endlessly.

The ruling Awami League had a hard time shrugging off the snub to Bangladeshi prestige. Expectedly, the main opposition Bangladesh National Party (BNP) and the pro Jamat-e-Islami forces (their numbers are still considerable), had a field day in their anti-India campaign. Bangladesh Foreign Ministry cautiously declared that Assam elections and related matters were India’s internal affair. It added that at the highest political level, presumably referring to the Prime Minister-to-Prime Minister level dialogues— India had repeatedly assured Dhaka that its interests “would not be affected in any way by the implementation of the Citizenship Amendment Act (CAA) or the National Register of Citizens (NRC) updating exercise.”

While Indian leaders do not exactly suffer from a foot-in-the-mouth syndrome while referring to the country’s Eastern neighbour, the big brotherly attitude unconsciously adopted by some people within the Indian political spectrum creates problems.

Others noted that that same dirge-like mood could be seen among Indian analysts as they recently discussed Bangladesh overtaking India in terms of per capita GDP income during the COVID-19 pandemic.

For instance,  most Bangladeshis are angered by repeated put-downs of their national cricket team which loses far more often than it wins against the mighty Indians by patronising Indian commentators. The fact that Bangladesh, a late entrant to test cricket, fights harder than before, making some contests closer, is not adequately recognised. Worse, on the rare occasion of a Bangladeshi win even at the junior level leaves most Indian commentators gutted.

“The way the Indian lady commentator spoke, it seemed it was the ultimate insult for India to lose to minnows Bangladesh, why on earth? There are always wins and losses in every sport….. Why should the heavens fall if Bangladesh wins once in a while?” wrote a correspondent in the Dhaka press on one occasion.

Others noted that that same dirge-like mood could be seen among Indian analysts as they recently discussed Bangladesh overtaking India in terms of per capita GDP income during the COVID-19 pandemic.

Congress President Rahul Gandhi made it a prestige issue, his tweet suggesting that India had economically lost out to a sub-human species. No wonder Bangladeshis were not amused. Further, Bangladesh would continue to remain ahead up to 2024 or 2025, said the International Monetary Fund (IMF) and other sources.

“Again, the way they spoke in India, whether leaders or analysts, it seemed the world had come to an end for India, falling behind Bangladesh!” commented a netizen, supported widely by others. They should appreciate the progress we, a country of 160 million people, have made in many sectors. We do not brag about the distance we have covered during the last two decades, but we are ahead of much bigger, stronger India in female literacy, women empowerment, employment generation, child health care and other sectors. Perhaps because we do not shout from housetops, most Indians are blissfully unaware of these facts. Also, we always acknowledge that India is so much bigger there can be no comparison between them and us” were the dominant themes in terms of public reaction.

It has been reported earlier that Bangladesh nowadays places its orders for the ambitious development plans for its railways going for the best available equipment in the market. Accordingly, whether ordering wagons, signals equipment, locomotives or high-tech communication and monitoring accessories Bangladesh chooses South Korean, Japanese, Chinese or other items, not always going in for Indian products as before. Dhaka-based officials expressed appreciation for railway engines and India-built passenger buses given to Dhaka as a goodwill gesture. However, there was also muted criticism alleging that some of the vehicles had obviously been used before. Words got into the local press. Bottom line, India really should take more care about its goodwill gestures and not act patronisingly. There is no room for complacency.

If necessary as a sovereign country it will accept Chinese assistance. Similarly, it has no commitments to accept unconditionally all Indian offers, whether for COVID-19 vaccination or railway equipment. It will buy only what suits it best, on its own terms.

Seasoned diplomat Harsh Shringla who has played a major role in taking forward Indo-Bangla relations in recent years, received a gentle hint that Bangladesh will not necessarily bang its head against the wall if India does not concede to some of its urgent demands. Bangladesh press reports that during his high-level talks in Dhaka last year, most officials and Ministers listened more than they spoke. Perhaps, it had to do with his visit being an unscheduled one and therefore not official. He could meet the Bangladesh Prime Minister with some difficulty and discussed the Coronavirus pandemic situation with Sheikh Hasina.

Significantly, neither she nor any official made any reference to the Teesta water-sharing issue or the contentious citizenship issues. Thanks to Mamata Banerjee’s opposition in 2011, Delhi has been unable to settle the sensitive water sharing dispute in North Bengal with Bangladesh despite repeated requests.

After waiting many years for a solution, Dhaka finally received major technical and financial help from China through a proposed $300 million dollar comprehensive package that is designed to end the problem of the lean water supply during four months in the winter.

Also on the pandemic, Dhaka did not commit itself to go in for a vaccine developed by India indicating that it was studying options from China, Russia, United Kingdom and the USA.

A Bangladeshi analyst points out that it is being made clear to India that whether about the Teesta or other matters, Dhaka will not wait endlessly for the country to make up its mind on important bilateral issues. If necessary as a sovereign country it will accept Chinese assistance. Similarly, it has no commitments to accept unconditionally all Indian offers, whether for COVID-19 vaccination or railway equipment. It will buy only what suits it best, on its own terms. Even behind Dhaka’s decision to acquire two submarines from China or nuclear power plants from Russia, the new element of assertion is too obvious to be missed.

Dhaka watchers should also not gloss over the fact that Bangladesh did not express any support for India during the stand-off against China in Ladakh and responded positively to Pakistani overtures to resume normal ties after a prolonged gap.

(Ashis Biswas is a Kolkata-based journalist. The views are personal.)