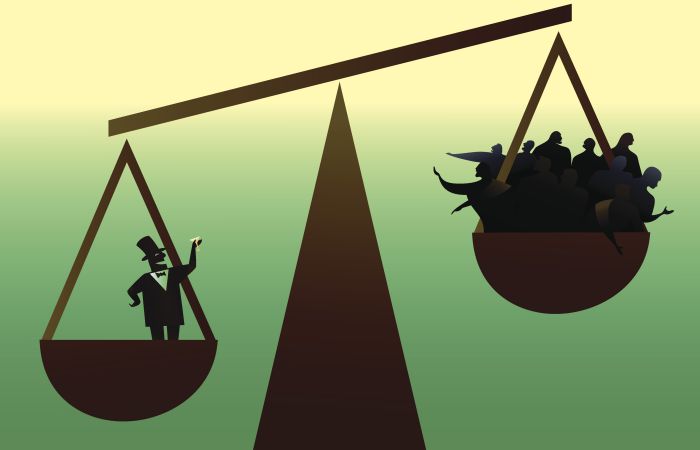 In Pandemic, India’s Super Rich Get Richer by 35% While Common People Suffer the Most

Capitalism allows the rich to accumulate wealth in a crisis and concentrate it in the hands of a few, writes PRABHAT PATNAIK.

There are certain occasions, however, when one can say something definitive about wealth distribution; and the period of the pandemic has been one such occasion. There can be little doubt that during the months of the pandemic, even while millions of working people all over the world were suffering from acute loss of employment and income, the world’s billionaires added hugely to their wealth; and this certainly meant an increase in wealth inequality in the world.

According to a report by the Swiss bank UBS, mentioned in The Guardian of October 7, the wealth of the world’s billionaires increased by 27.5 per cent between April and July this year, the period when the pandemic was at its peak. Their wealth by the end of July had touched a record high of $10.2 trillion or £7.8 trillion. The previous peak of billionaires’ wealth was $8.9 trillion at the end of 2017. Since then while the number of billionaires has increased slightly from 2158 to 2189, their wealth has increased considerably. In fact between end of 2017 and end of July 2020, per capita wealth of the billionaires has increased by 13 per cent. The point however is that this increase is the net result of two contradictory movements: a fall until April 2020 and a sharp rise by 27.5 per cent thereafter until end-July.

This rise has a particular significance.

The increase in wealth inequality after April however is altogether different. According to a UBS spokesperson, when stock prices were falling prior to April 2020, the billionaires not only did not sell off their stocks in a panic, but actually bought up stocks from smaller owners who were engaged in panic-selling; as a result, when stock prices increased after April, they got enormous capital gains.

These gains arose essentially because the small stock-owners did not have the capacity to hold on to their stocks. Thus the increase in concentration of wealth during the pandemic was not just vis-à-vis the very poor who are without any wealth anyway, but also vis-à-vis small wealth holders. It was not just the spontaneous effect of a general rise in stock prices; it was a specific act of what Marx had called centralisation of capital.

In Imperialism, Lenin had said that every crisis under capitalism, whether economic or political, becomes an occasion for centralisation of capital; one has to add medical crises to Lenin’s list, indeed every possible kind of crisis.

The usual mechanism for centralisation is the ruin that visits small capitalist producers during a crisis (it also visits petty producers but their decimation is covered under the term primitive accumulation of capital, rather than centralisation), and hence those, typically smaller banks or credit agencies, that had financed them. All these are either taken over by larger companies, or simply go under, leaving the field open for larger companies to encroach upon the space hitherto occupied by them.

In addition to this mechanism for centralisation, there is also the sheer fusion of capitals, the pooling together of vast masses of small capitals into a few large ones, such as what the banks or the stock market bring about. This constitutes another mechanism, a powerful one at that, of centralisation.

What we have seen during the pandemic is yet another mechanism of centralisation, different from the above two, arising from the inability of small wealth-holders to face stock price collapses, that the billionaires can face. This ability of billionaires has nothing to do with any “courage”, or “guts” or “entrepreneurship” or any of those supposed virtues that capitalist mythology invests them with; it has simply to do with the fact that they are big.

Because they are big, they can afford to take stock price fluctuations in their stride, and even make massive gains from the inability of small wealth-holders to do so. In fact, ironically their ability to withstand stock price fluctuations arises not from their being “risk-takers” but from their being precisely the opposite, namely, averse to taking risks.

Stock market fluctuations are common under capitalism; but the falls are much sharper during crises, no matter how they are caused.

Their being rich implies that they can afford the luxury of not taking risks, i.e., the luxury of “safety”. Hence, they hold their wealth in a diversified form to minimise risk, and stocks are only one of the forms in which they hold their wealth. When stock market prices collapse to an unusual degree, as happens with any unprecedented crisis, they can remain unperturbed, while smaller wealth-holders are taken unawares. The large wealth-holders use this opportunity to make gains from the woes of smaller stock-holders who start selling stocks in desperation.

An example will make the point clear. If I have Rs 100 of wealth, then I would like to hold it in a form that gives me a large enough income even if there is a danger of my making capital losses. My preference is not because I like taking risks but because I need the income desperately. So I shall put all my wealth, say, into stocks; by contrast if I have Rs 1 million then I already have ample income anyway and I can afford to hold say only half of my wealth in the form of stocks and the other half in the form of bank balances which hardly give any income. If there is a 10 per cent fall in stock prices then while the small stock-holder loses 10 per cent of his wealth, the large stockholder loses only 5 per cent (i.e., 10 per cent on half his wealth). The latter therefore can afford to take the fall in his stride, while the former cannot. And when in desperation, to prevent further losses, the former starts selling stocks, the latter, i.e., the large stock-holder, buys up these stocks and holds them till the market turns more favourable.

Stock market fluctuations are common under capitalism; but the falls are much sharper during crises, no matter how they are caused. And this is precisely the period when the large wealth-holders make a killing at the expense of the smaller ones. Centralisation occurs with a vengeance during such periods.

The UBS spokesperson claimed that the increase in wealth concentration during the pandemic was a phenomenon alien to capitalism.

This entire process while carried out vis-à-vis small wealth-holders, is reminiscent of the primitive accumulation of capital inflicted upon petty producers.

If the large wealth-holders buy stocks worth (genuinely) Rs 100 from smaller ones at Rs 100, then there is no net gain for them. To pay for this purchase they have to either run down their cash balances or to borrow from banks or to sell some other asset they own; in all these cases there is no increase in the net assets they own (or their “net worth”). But if they purchase stocks worth Rs 100 for only Rs 50 because of a crash in stock prices, and, say, borrow this amount from a bank, then when stock prices recover to their true value, they would have expanded their net worth by Rs 50. Larger stock-holders in this case would have enriched themselves at the expense of the smaller ones by Rs 50, which is analogous to primitive accumulation of capital.

The UBS spokesperson claimed that the increase in wealth concentration during the pandemic was a phenomenon alien to capitalism. He could not have been more wrong. It is entirely in conformity with the logic of capitalism; in fact it is inevitable under capitalism that every human tragedy which unleashes a crisis in this system becomes an occasion for an increase in wealth concentration through the mechanism just outlined.

This increase in wealth concentration has happened in country after country including even in India, where, according to the same source, the wealth of Indian billionaires has increased by 35 per cent over the same period to $ 423 billion (The Wire, October 16). Over this period, output has contracted by almost a quarter, and so has employment; this contrast gives an idea of the modus operandi of capitalism. (IPA)

(Prabhat Patnaik is a political economist and former professor at Jawaharlal Nehru University. Views are personal.)