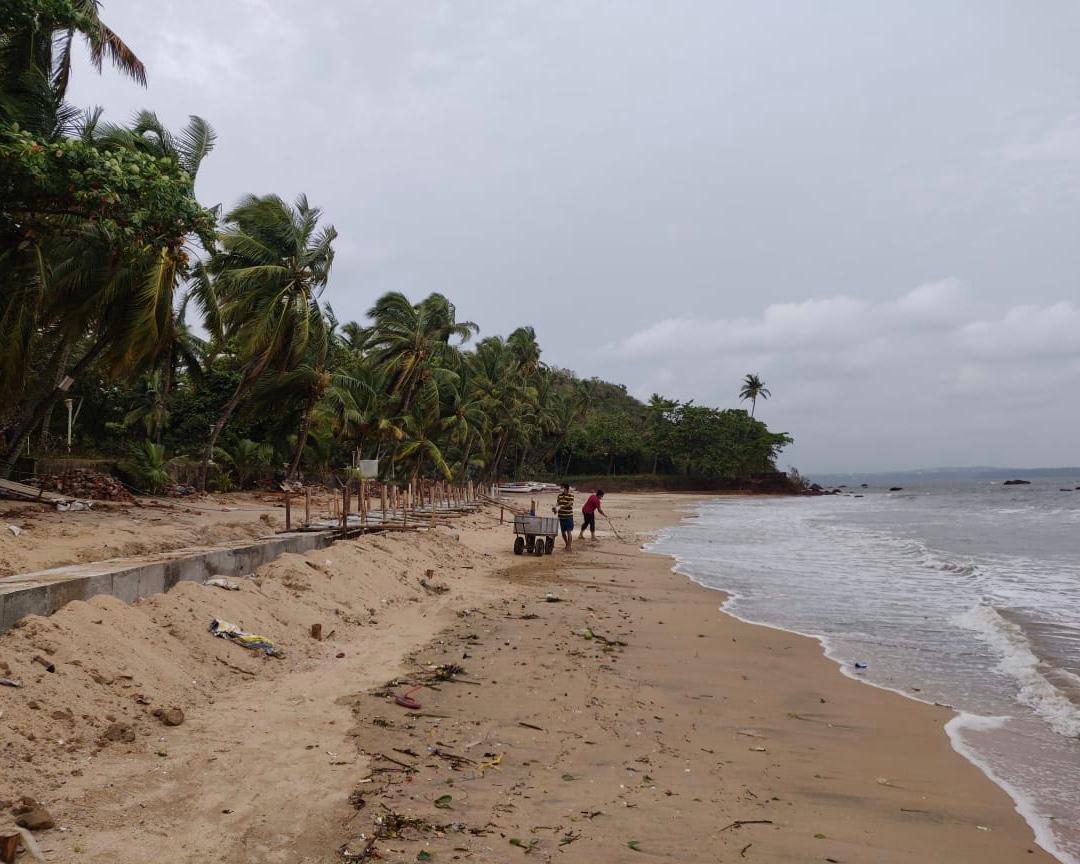 Goa, best known for its scenic beaches, is facing a crisis. A quaint beach away from the tourist’s eye has an illegal wall being built on it. This affects not only the marine life but the locals as well, reports NAVAMYA G. ACHARYA from Panaji.

LOCATED 8 km south of Panaji city, Vainguinim beach is known for its crystal clear water and the serene atmosphere that it provides, unlike the other jam-packed beaches in the state. The beach is a quiet and peaceful place for people to go on walks and picnics. The wide stretch of the Arabian Sea offers a magnificent view of the sunrise and sunset.

Amidst the COVID-19 curfew in the state, there has been alleged illegal construction of concrete walls on the beach. The Vainguinim Valley Residents Association (VVRA), along with local residents, complained about the same with the Goa Coastal Zone Management Authority (GZMA).

GZMA is responsible for implementing the provisions of the Coastal Regulation Zone Notification in the state of Goa. As per the notification, which governs all human activity along the coasts of India, coastal land up to 500 m from the High Tide Line and a stage of 100 m along banks of creeks, estuaries, backwater, and rivers, subject to tidal fluctuations, is called the Coastal Regulation Zone (CRZ). Most construction activities, especially of the sort being seen on Vainguinim beach, are prohibited on CRZs. On 27 April, at the behest of the hotel, the local district court had served a notice to the VVRA, requesting for a temporary injunction on the basis that the VVRA was interfering with the hotel’s ‘legal beach work’ and that they are ‘intimidating their workers with threats’. The next day, the GCZMA sent a show-cause notice to the hotel, asking it to produce all paperwork and permissions by May 3 and to attend a personal hearing on the matter on May 6.

On May 6, the District Court ordered that no work would be undertaken on the beach till the date of the next hearing, which was set as May 10. On May 10th, the district court proceedings continued, but the judge did not continue status quo on the work and hence the work was restarted on the wall. The next day, the VVRA filed a writ petition in the Bombay High Court against the hotel and the GCZMA. However, the High Court issued no interim relief, even as construction by the hotel at the beach finished on 21 May.

Meanwhile, the GCZMA had appointed an expert committee to inspect the beach. The committee’s report states that the construction was violating the conditions granted by the GZCMA to the hotel to construct an anti-erosion wall in 2017, and the construction of the walls was not done using eco-friendly materials. The report also included that the concrete structures are prohibited on the beach, especially within the intertidal zone, a highly ecological area.

What has been said by different stakeholders?

Clarifying the timeline of events, Aakash Madgavkar, a VVRA member says, “Locals noticed work being done on 18/4/2021 and brought it to the notice of the Village Panchayat, GCZMA and the Tourism Department,” says. He continues, “GCZMA, along with the local village panchayat, conducted a joint inspection on 23rd April. The inspection report recommended a ‘stop order’ to be issued as the conditions of the permission given were violated. At the same time, the village panchayat did not give any permission. Based on the report, the GCZMA issued a show-cause notice. After that, no action was taken by the respective authorities and the wall was built.” The hotel, on the other hand, has denied all wrongdoing on its part. “Fomento Resorts and Hotels Limited has undertaken only repair work on the retaining wall in their own property to prevent further erosion of the beach and restore damage from heavy rains over the past two years. We have acquired all requisite permissions and began work after consulting the Water Resource Department, Government of Goa. Fomento has always been committed to environmental preservation and will continue to protect and preserve Goa’s natural resources and biodiversity,” a spokesperson of Fomento Resorts and Hotels Ltd., the company that runs the hotel, said on the situation.

The Environment Minister of the state Nilesh Cabral, meanwhile, assured that the wall will be demolished if it is found illegal. He also said that the matter needs to be closely studied and cannot make a judgment based on a few videos and images that went viral. Cabral said, “I have to study it. And if it is wrong, it has to be removed, because the law is the same for everyone, including me. Let me see, let me understand the issue. I assure the people of Goa, I will personally look into it.” This isn’t the first time a beach has fallen prey to cement walls. Both government and private entities have been accused of illicit covert concrete construction activity on various beaches in the state on a regular basis in the last ten-fifteen years. These have been in flagrant violation of a Supreme Court judgment from 2009 in which (coincidentally, the judgmental was delivered dismissing an appeal filed by Fomento against a Bombay High Court order directing the demolition of illegal structures erected by the hotel at a beach)

The deleterious consequences of such construction are irreversible, adversely affecting many facets of the delicate ecosystem of the beaches, including the microhabitat, flora and fauna, and shoreline fisheries, among other things.

Also Read: “No generation has the right to consume and exhaust the capital – the only right is to the fruit of the land” Rahul Basu of Goa Foundation speaks about intergenerational equity and permanent funds with Norma Alvares

A fight to save the beaches

Residents have created an online petition to demolish the wall and save the pristine beach. The petition currently has over 13.8 thousand signatures. On June 18, 2021, Twitter received a legal request to take down posts by environmental activists and residents protesting against the concrete wall that is built on the beach. It is not clear who has made these legal requests, although usually such requests are made by Indian law enforcement agencies.

Several Twitter posts tagged the Chief Minister, Dr. Pramod Sawant along with the hashtag #Save Vainguinim Beach. 18 people as of now have received a notice from Twitter stating that their post is against Indian Laws.

The GCZMA has decided to conduct a joint inspection on June 28, 2021, to plot the location of all walls, the High Tide Line, the ‘existing linear wall’ as per records, and to record dimensions of the walls as well as to assess the construction of the linear wall as per permissions granted by it to the hotel in 2017.