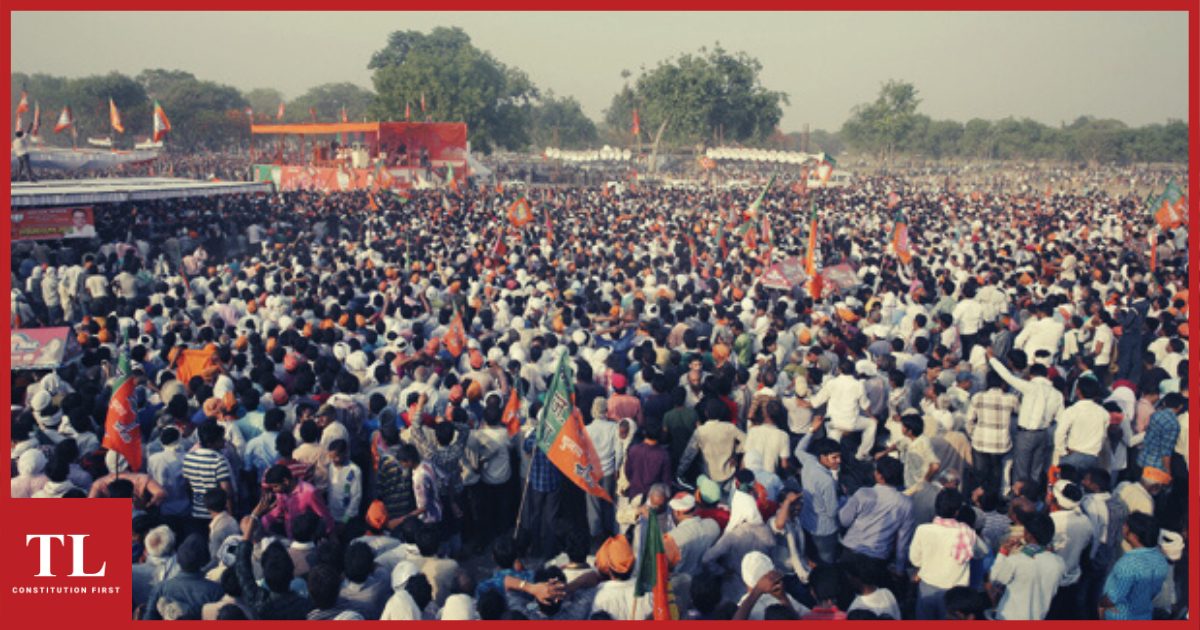 If Restaurants Close for Covid, Political Rallies Should Too: Dr. Shahid Jameel

Leading virologist Dr. Shahid Jameel is currently the director of the Trivedi School of Biosciences at Ashoka University. He explains in an interview with Newsclick why political and religious gatherings must stop immediately to check the surge in COVID-19 cases. He says if people follow COVID-appropriate behaviour, it will slow down the virus. Besides, they must not give in to rumours and anecdotes, which leads to unscientific behaviour. ‘There is more likelihood of dying from a lightning strike than from vaccine-induced blood clots. That is what the data shows. The trouble is we believe too much in anecdotal references,’ he says. Edited excerpts.

There is an unprecedented and alarming rise in COVID-19 cases. Is this a repeat of what we went through last year? Can our overstretched medical facilities cope with it?

Yes, we are indeed witnessing a very sharp rise in the number of COVID-19 cases. Our medical facilities are under a great deal of pressure. Hospitals are full or almost full already. It has become very hard to get beds again. The only logical explanation seems to be that the virus has changed. Variant viruses are moving much faster in the population. That is coupled with the fact that everyone thought the virus had gone away and so they put their guards down. But the virus is back, probably in a more infectious form. If you look at the mortality rates, it does suggest it is not as lethal, but I cannot say for sure.

In leading hospitals in Delhi, such as Sir Ganga Ram and AIIMS, doctors and other medical staff, who had been vaccinated, have also reportedly been infected. So, people are asking whether the vaccine offers protection or not.

The first thing to understand is that the vaccine does not offer protection against infection. This is a misconception everyone has that if you take the vaccine, you will get protected. The vaccine protects against severe disease. If you continue risky behaviour even after taking the vaccine, you will get infected. The vaccine has only been tested for efficacy against the disease. This is so, not just with this vaccine but other vaccines as well. A very senior doctor of a Delhi hospital [told me] studies in his hospital show that people who work in his ICUs are completely protected. There is no chance of transmission there. Most probably, people are getting exposed out-of-doors. Since they are doctors, we keep hearing about their cases, but we do not hear about others who also get infected.

How can we try to ascertain what is happening?

Investigations have started on this. One explanation is that vaccinations do not protect against infection; they protect against the disease. See, most of those who got infected after taking the vaccine are in home isolation. If they were not vaccinated, it would have led to a far more severe disease attack. We do not know whether mutant viruses are involved. [Also,] the COVID vaccines are so much in the limelight that any little thing that happens starts a panic.

After all, we have not seen such a pandemic before. Does everything now seem to have come to a halt. Our lives seem to have changed irrevocably.

Very true. We have not seen this kind of pandemic, but we did witness pandemics earlier. We had a swine flu pandemic in 2009 that is suspected to have infected between 700 million to 1.4 billion people. The laboratory-confirmed cases were almost 5,00,000.

With COVID-19, we [developed] vaccines within twelve months, so we are talking about it. Since there was no vaccine then, these questions did not come up. Vaccines are available, and there is much focus on every good and bad thing about it. If it were not available, we would not think about it.

Many would not know even today that the swine flu epidemic was so widespread. Was it contained?

No, it was not contained. Look at the data from around the world. The problem is that our memories are very short.

Some say the ongoing rise in COVID-19 cases is attributable to the United Kingdom and South African variants, which seem to be prevalent in Maharashtra and Punjab.

The UK variant is widespread in Punjab. The government released data on March 24, according to which 20% of this double variant was found in Maharashtra. But to call this a “double variant” is a misnomer. It [the virus that causes COVID-19] has had 15 different changes, and two of these are very critical. We do not have the data on whether this has spread very widely in Maharashtra and other states.

We have elections in five states where large crowds are gathering, and most people attending rallies not wearing masks. The top leaders are also not wearing masks. I suspect that in these states also, COVID-19 is quite widespread, but I do not have data on this.

Is this because of a lack of awareness amongst the top political leadership?

I am sure there is awareness, especially in political leadership. They come on TV and say there is no vaccine shortage. Is this all a political gimmick? I don’t know! I am not part of the administrative setup. I don’t know what they are planning.

There seem to be two contradictory things happening. Many of our top leaders did get COVID-19, yet elections seem so paramount that rules and regulations are brushed aside.

There are many contradictions. You have a night curfew in some states, and in other places, large crowds are being allowed to gather. Take the Kumbh Mela, where lakhs have gathered to take a dip.

Do we need a uniform policy across the country?

Only policymakers can speak on this. I cannot tell you what kind of policy they are making or following.

I ask from a scientific point of view.

Should not scientists speak out against these electoral rallies?

Scientists are talking about it, but how much can scientists do? They are writing articles, giving interviews, helping the government in various ways to control the outbreak. Beyond this, what can they do?

There should have been a lot more forewarning about these mutants. Are travellers from outside the country bringing them, so now we have a phenomenal spread?

Viruses spread through human behaviour. If humans do not follow protocols, then we will face problems. It is linked to a lack of trust in the system. Everyone wants to bypass the system. There are reports from Mumbai that quarantined travellers pay money to break quarantine. We live in a very complex country. The ground realities are very different.

In December and January, there was a sense of relief that we would hopefully see an end to the pandemic. Has the situation now reversed?

There is still time. If we behave, it will go down. We have to be pretty careful. Go on the street and see how many people are wearing masks and wearing them correctly. Just because there is a vaccine does not mean everything will be fine. A vaccine has to go into you, and then it takes six weeks for the immunity to develop. The primary tool is behaviour modification. This is being said again and again, but it just does not sink in. Instead, there is panic. [People are saying,] ‘doctors are getting infected, so vaccines are useless’, ‘In Europe, it is causing blood clots, so I will not take the vaccine.’

A drawback of the vaccine program is that the government has not done enough to highlight side effects. I know of people who have been vaccinated and died. One was a senior lawyer whose family has asked for a post mortem, but they will get the results only after a month. The lack of transparency has led to a lot of rumour-mongering and fuelled apprehensions about taking the jab.

It is very unfortunate if that happened. I hope for the sake of the family that they can establish something to their satisfaction. But the incidents of blood clots even without vaccines are one to two per cent per 1,000 cases per year. That is the random rate per year. If you look at all the blood clots reported and divide that by the number of vaccines administered, the rate of blood-clotting after vaccination is minuscule.

Anecdotal references are there because all this is new for us. But the fact is that government has not come up with assurances. The Ministry of Health should have talked about all these issues. A Times of India report said 700 people suffered adverse effects.

The government has come up with some figures–180 adverse effects with those associated with vaccines. But I agree that better communication does work. Clear communication has been a casualty through the past year. There has been a lot of mixed messaging.

Yes, but do you think we should take the EU and UK suspicions on Covishield causing blood clotting more seriously?

What is the solution? Should we stop giving people Covishield? The government has given 9.5 crore people vaccines, out of which 90% are Covishield. That is 8.5 crore people have received Covishield. Let us say we have 300 adverse effects out of 8.5 crores. Do the calculation. I can assure you that the number will be no better than those suffering the side effects from taking paracetamol.

Let us consider the vaccine shortage. Can the government try to import more vaccines?

We do not need to import more vaccines. Two vaccines are already awaiting regulatory approval. Sputnik has entered into a partnership in India and is ready to make 800 million doses per year. Johnson & Johnson has come to an agreement with a company based in Hyderabad. Why has the regulator put these vaccines on bridging trials? Sputnik is being used in 40 countries [Ed: Sputnik V got Indian approval on Tuesday]. Covishield and Covaxin got approved without bridging trails. Covaxin got approved without any efficacy data.

How long will we have to live with the virus?

We have to live with it for the next few years. It will steadily go down and then become an endemic virus. There will be seasonal outbursts. Even after the pandemic is over, we will have to live with localised outbreaks.

(Rashme Sehgal is an independent journalist.)