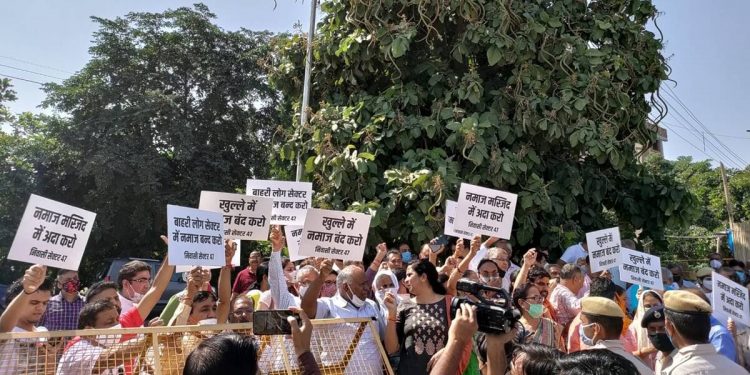 By couching the harassment and disruption of jumma namaaz in public spaces by Hindu-right wing groups in Gurugram as a ‘dispute’ rather than acting against the latter under appropriate provisions of criminal law, the State administration weakened the rule of law, writes VINEET BHALLA.

SINCE September this year, the offering of Friday namaaz by the Muslim community in Gurugram has become quite a hot-button issue, with several hundred people from right-wing Hindu groups routinely gathering at some of these spots and attempting to disrupt the offering of prayers by the Muslim gatherees.

In the last few weeks, the protestors have, among other things, chanted loud and provocative slogans at the namaaz-offering devotees, taken over the namaaz sites to offer puja, park trucks and play cricket matches to prevent the Muslim devotees access to the sites, and even left dung cakes on them in order to dissuade the Muslim community from converging for namaaz at these sites.

As a result, there has been heavy police deployment at these sites during the Friday prayers every week to prevent a breakdown of law and order.

Also read: 305 attacks on Christians in Indian in first nine months of 2021, only 30 FIRs: fact-finding report

Why were Muslims offering namaaz in public spaces?

The district of Gurugram has over 80,000 Muslim residents, comprising about 4.7% of the district’s total population. However, the district reportedly has only 13 mosques. Of these, only 12 are functional, since one was sealed in 2018 by the Gurgaon administration on the bizarre ground of being located in close proximity of an Indian Air Force ammunition depot.

Earlier this, one of the Hindu right-wing outfits at the forefront of these protests, had issued an ultimatum to the state administration that they won’t allow namaaz at any of the designated sites from December 10 onwards. Ultimately, Khattar’s announcement of cancellation of permission for namaaz at these sites came on December 10 only.

As per the Quran, Muslims are supposed to congregate and offer namaaz on Friday afternoons, called “jumma namaaz”. Normally, this is done inside mosques. However, due to the shortage of mosques in Gurugram, its Muslim residents had been doing so in over 100 open spaces designated for the purpose for years. However, following the first such protests in 2018, these were reduced to 37 spots by a government committee.

At the beginning of last month, the administration further reduced these to 20, which was further whittled down to six later. Last Friday, even the permission for these six spots was withdrawn by the Haryana Chief Minister Manohar Lal Khattar, who publicly declared that the practice of offering namaaz in the open “will not be tolerated”.

Khattar has assured that an amicable solution is in the process of being worked out in discussion with all relevant stakeholders. He suggested that the state waqf board’s properties will be freed of encroachment in order to make it available for prayers. He stated that “religious places are built for these purposes only so that prayers are offered there. Such practises should not take place in the open”, but did not say anything about whether the state government planned to build more mosques for the Muslim community.

The rationale for cancelling the permission for namaaz at all public sites, as per Khattar, is to avoid “confrontation” and prevent any further “law and order situation or any tension”.

Coincidentally, earlier this month during one of such protests, the state president of the Sanyukta Hindu Sangharsh Samiti, one of the Hindu right-wing outfits at the forefront of these protests, had issued an ultimatum to the state administration that they won’t allow namaaz at any of the designated sites from December 10 onwards. Ultimately, Khattar’s announcement of cancellation of permission for namaaz at these sites came on December 10 only.

Do the protestors have any actionable claim against the Muslims offering namaaz in the open?

While some local residents near one of the erstwhile prayer sites did submit a memorandum to the district administration last month opposing the prayers, there is nothing in the public domain to suggest that any of the Hindu right-wing protestors approached the Gurugram police against the Muslim devotees.

After all, the protestors would have seemingly no locus to file any complaint with the police, since the Muslim devotees have, by congregating at sites approved by the state administration for prayers that last not more than 15-20 minutes once every week, have not engaged in any conduct that is either unlawful or caused inconvenience or nuisance to the public at large even once in the several years that they have been doing so.

In simple words, the protestors had no legally actionable claim against the Muslim devotees to rely upon to prevent them for offering namaaz in the designated public spaces. In which case, their constant and pre-meditated efforts to disrupt the jumma namaaz offering every week for the last three months amounts to nothing more than harassment of these members of the Muslim community.

The protestors had no legally actionable claim against the Muslim devotees to rely upon to prevent them for offering namaaz in the designated public spaces.

While retired Indian Police Service officer and writer Dr N.C. Asthana has written that the designation of the spots for offering namaaz to the Muslim community by the state administration was done in a legally erroneous manner and was thus void, even in that case, the protestors should have taken this up with the defaulting party, that is, the State, rather than harassing the Muslim devotees.

Also read: Why the PIL to Truncate the Qur’an is Misconceived

Before the approval for open namaaz was revoked on Friday, over the last three months, the Friday prayers had been occurring under heavy police presence in light of the provocative protests. The police would often resort to forming human chains around the Muslim devotees to prevent the protestors from physically disrupting the jumma namaaz.

They also last month arrested one of the protestors, a Dinesh Bharti (referred to in some media reports as ‘Dinesh Thakur’), under Section 107 of the Criminal Procedure Code (CrPC), and Sections 151 (Knowingly joining or continuing in assembly of five or more persons after it has been commanded to disperse) and 107 (Abetment) of the Indian Penal Code (IPC). Some other protestors have occasionally been detained and taken away by the police, before being warned and let off.

However, the acts of the protestors prima facie fit the description of more grievous offences described in Sections 153A (Promoting enmity between different groups on ground of religion, race, place of birth, residence, language, etc., and doing acts prejudicial to maintenance of harmony), 295A (Deliberate and malicious acts, intended to outrage religious feelings of any class by insulting its religion or religious beliefs) and 296 (Disturbing religious assembly) of the IPC. All three are cognizable offences (that is, the police may arrest someone without a warrant for such offences), while the former two are non-bailable.

The rationale behind section 295A was articulated by the Supreme Court in its judgment in the case of Ramji Lal Modi vs. State of Uttar Pradesh (1957), in which it was held that this provision is enacted in the interest of public order and penalises only aggravated forms of religious insult, when it is perpetrated with the deliberate and malicious intention of outraging the religious feelings of a class of citizens.

The pre-meditated nature of these protests is demonstrated from the fact that the same group of protestors showed up each week at the prayer sites, sometimes with weapons, in moves planned every week over Whatsapp groups.

Khattar and the district administration, too, have erred by painting the targeted harassment of innocuous Muslim devotees by a devoted group of harassers, some of whom would be carrying weapons, as a ‘dispute’ to be settled ‘amicably’ by involving all stakeholders. Such dereliction of its duty by State agencies only goes on to encourage the heckler’s veto, wherein one section of society is forced to repress itself from saying or doing something by the government due to the possibility of a violent reaction by the hecklers.

Similarly, with regard to section 296, the disturbance to an assembly performing religious worship must be caused voluntarily to attract this section; that is, there should be mens rea. As held by the Madrash High Court in The Public Prosecutor vs. Sunku Seethiah & Ors. (1910), this ‘voluntariness’ is fulfilled even if the offender knows that their act may cause disturbance and despite knowing this, they takes the risk of committing the act.

The district administration is also sufficiently empowered by Chapter X of the CrPC to act against certain persons for the maintenance of public order and tranquility. The Gurugram administration failed to avail of these powers too.

The Jamait Ulema-i-Hind members earlier this month filed a police complaint against three Hindu right-wing group leaders for making provocative speeches. However, the police has reportedly not converted the complaint into a first information report yet.

Some Muslim groups also planned to approach the judiciary to seek relief from the harassment and uphold their fundamental right to religious practice. However, in light of the cancellation of the permission to offer namaaz at public spaces, it remains to be seen whether they have grounds for legal action.

Major takeaways from the controversy

Both the police and the state administration could have dealt with this situation a lot better. The police ideally ought to have nipped the protests that sought to harass and provoke the namaaz offerees every week by apprehending the protestors under sections 153A, 295A and 296 of the IPC, rather than allowing them to arrive at the sites every week and merely preventing them from actually physically assaulting the gathered Muslims.

Khattar and the district administration, too, have erred by painting the targeted harassment of innocuous Muslim devotees by a devoted group of harassers, some of whom, it merits repetition, would be carrying weapons, as a ‘dispute’ to be settled ‘amicably’ by involving all stakeholders. When one party commits a criminal offence against another, there is no question of a dispute to be settled; the offender should be duly dealt with as per the law. Even worse, Khattar publicly sided with the offenders, by publicly condemning the practice of offering namaaz in the open (which his administration had allowed at certain designated spots), but saying nothing about the targeted harassment practiced by the Hindu right-wing groups.

Such dereliction of its duty by State agencies only goes on to encourage the heckler’s veto, wherein one section of society is forced to repress itself from saying or doing something by the government due to the possibility of a violent reaction by the hecklers.

When the State gives in to hecklers by revoking approval for lawful open prayers or, for instance, cancelling stand-up comedy performances due to the threat of violence by radical groups, it signals a weakening of the rule of law.

In Gurgaon, the state government must immediately make up for its hitherto faulty approach by offering Muslims space for building sufficient number of mosques to cater to the Muslim community in the city and the district.