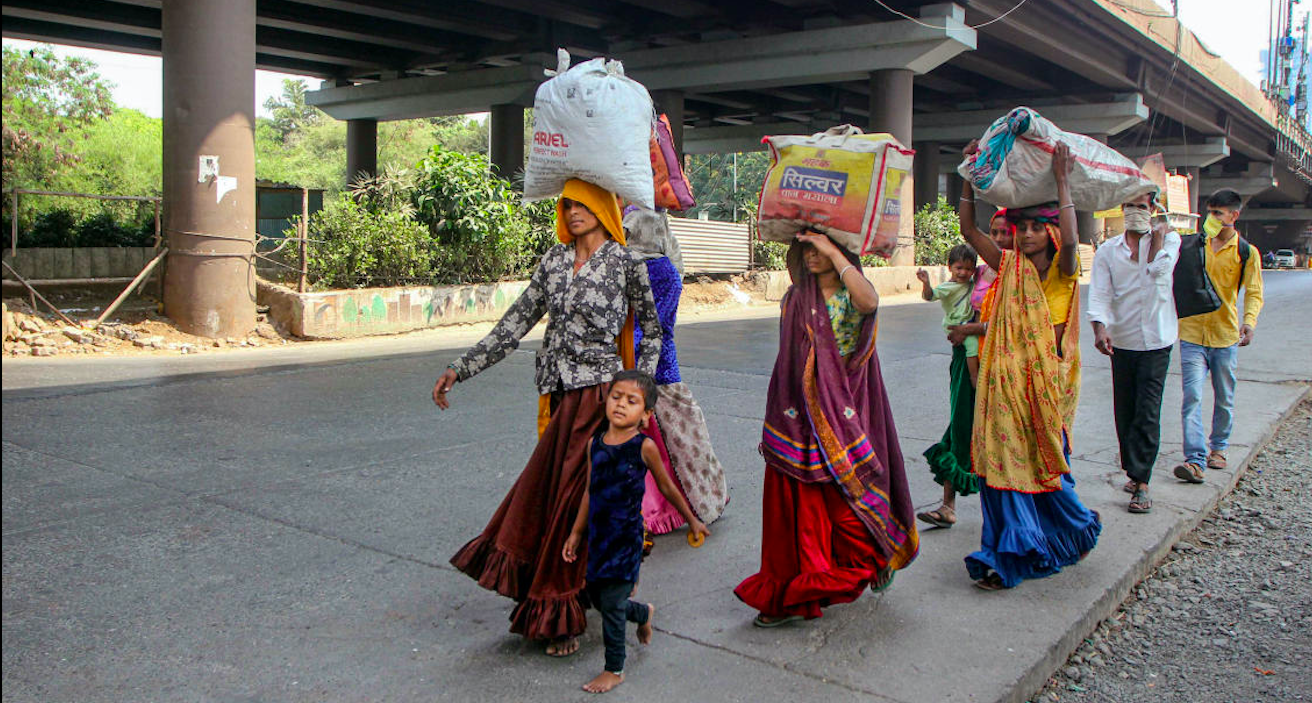 How long will the Indian poor be invisible?

The narrative of development is often lost in nationalistic fervor. The Indian poor are invisibilized in the progress of the rich. The author narrates how India has let down its poor citizen in the context of the migrant labor crisis during coronavirus pandemic.

I have often wondered how little of our public discourse is about the poor and the lives they lead. Considering the vast number of people who eke out an existence in our country that bears comparison with the lives of people from the most deprived regions of the world, there is very little discussion and debate in the media about t our poorest citizens and their concerns.

A classic expression of this invisibility of the poor for our media and the people who wield power at different levels and positions is the reference to “migrant workers” that briefly dominated our discourse in recent times.

It was remarkable that urban, educated citizens who used the term made no mention of their own relationship to these “migrant workers”. After all, it was their services that had enriched and enlivened their existence for so long. They cleaned our homes, they cooked our food, they ironed our clothes, they kept our malls and theatres gleaming. Ironically, we still did not feel any personal connection with these people as individuals.

It was ok for all of us to just label them as “migrant workers” and take shelter in the political correctness of this term since it might so easily have been, “these poor people”.

My experience as a writer has brought me against a wall of indifference for the plight of the poor in more ways than one over the years. The present has only highlighted what I knew for a long time.

On the 10th of May, 2020, I met a young man walking from where I live in Maharashtra to his home in Chhattisgarh. He was wheeling a suitcase and walking in the scorching sunlight, with a bird on his shoulder.

I had stepped out during the lockdown for a grocery and vegetables run. Having just picked up some fruits, I was about to start the car for my next stop when I saw, in my rear-view mirror, a group of men, women and children walking with their luggage. I got out of the car and spoke to the young man walking at the head of the group. When I learned of their destination, I was disoriented for a few moments. Was there even a road to Chhattisgarh in the direction these people were travelling? There was a female blossom headed parakeet on his shoulder, hanging on grimly, just as the young man and his companions were, to a reality that seemed macabre beyond belief.

There were no trains or buses that could take these passengers home. My eyes started filling up as I saw a small girl trying to skip along, slim women walking in sarees, sindoor spilling from the parting of their hair, and the loose change of existence they carried like clothes, bottles of water or a plastic toy peeking out of their bags.

I was glad I had my mask on. Not because it was safe to have one, but because I would not be recognised by familiar local vendors and neighbours as an adult hopelessly crying on the highway.

As the members of his group began catching up,  I realised that seconds were very precious. I couldn’t stop them as it would delay them. There was fruit lying in the car and as I took it out to share it with them, the bird recognising grapes that I held, climbed down from the young man’s shoulder and clung to his chest.

“See, my tota (parrot) has come down for a bite,”  he said bowing gratefully and bidding farewell as he and his group continued walking.

His farewell seemed quite insouciant. I found it difficult to recover from this encounter over the next few days. My daily prayers on a variety of topics changed to a single prayer: All of them should reach home safe. That his bird should be alive at the end of the journey. That he and the little girl should be safe.

I had not even asked his name or even clicked a photo but wondered if our paths would ever cross again. It was just that he reminded me of many others that I had met and written about down the years.

It is strange how events pan out to teach us small truths.  One such event was in 1999 when  I received a grant from the India Foundation for the Arts to study the lives of itinerant toymakers who make and sell their toys on city streets, and write a book on the subject. It was nature’s way of teaching me about people I knew nothing about.

I met toymakers on streets and fairgrounds in towns like Indore and Agra, Chennai and Varanasi, Jaipur, and Bangalore, besides many other places. During those years, people from my own social milieu who learned that I was working on such a project always assumed that I was studying some well-established “crafts tradition”.

They imagined that I would be spending long months in Chennapatna, near Mysore, studying wooden toy making. I did go to this place, but my subjects were not dedicated craftsmen wedded to or sustained by a well-established tradition. They were individuals among the urban poor by the sight of their shiny, breakable, handmade paper-string-and-glue toys. When I explained to my friends and acquaintances, that  I was not studying traditional crafts, but the creativity and ingenuity of the urban poor, I met with nods, but rarely, understanding.

I travelled to 27 towns looking for toymakers.  In each town, my collaborators were rickshaw drivers, tea stall keepers, vendors selling snacks, balloon sellers, and others in the shifting kaleidoscope of cities.

I met people eking out their existence through a variety of occupations for survival, which made the toymakers all the more remarkable. I considered them special for exercising an individual choice to live by their own creativity, in circumstances that pushed them ever closer to a menial occupation as labourers.

In studying their seasonal sales, the way they had evolved their own guru-shishya practices with mentors, the way they were sustained by friends and fellow strugglers, I learned to look at the urban poor as individuals.

Just like the young man in 2020, who may have been a construction worker, painter, electrician, roadside dhaba employee, or any other vocation.

My work on the toymakers was in a sufficiently advanced stage when the first Outlook-Picador India Non-Fiction Competition was announced. I thought this augured well for my book and wrote an essay for the competition. It clinched the second position, just behind Tenzin Tsundue’s entry about the Tibetan community.

Although I was unable to achieve my burning desire to have the toymakers, I was studying to get featured in Outlook magazine, my essay The Bits and Pieces Artists does continue to have its online presence on the Outlook website.

Buoyed by the possibility of finding a publisher for my book because of this trailer that had already made its way into the public domain, I underwent an excruciating reality check over the next few years. My book manuscript collected an impressive collection of rejection slips. While I tried not to take this personally, thinking that I had already received validation for my writing, a few of the rejections had a soul-scarring character, like a four-word rejection saying, “Not fit for publication.”

The kindest and most positive thoughts about publishing I could have during this entire period were that publishers were, after all, risking their money and investing in a book that needed to be seen as a good return on investment. If a book titled, The Toymakers: Light from India’s Urban Poor, was being consistently rejected, it meant that there was no market for tales of the urban poor among the readers and buyers of English books.

In the constant churn of my thoughts and feelings during the period, I wondered if my very idea of distinguishing gifted, creative and self-directed individuals among the large category of people we lump together as “slum-dwellers”, “urban poor”, or “migrant workers”, it was doomed at the outset.

I also wondered if I was guilty of writing in English with a vernacular sensibility and if this mismatch was what was being detected by discerning editors.

I considered whether the poor toymakers would have had a better chance of being noticed if it had instead been written a book of literary fiction about them, instead of this difficult to sell genre of narrative non-fiction. It was a time of much self-doubt and speculation.

The Toymakers: Light from India’s Urban Poor finally did make its way into the world in 2008.  By then, I had several volumes of children’s books published, in addition to my earlier works, which served as a salve for a writer’s angst-ridden sense of self. However, the problem of how poor urban people were being portrayed and perceived in books continued to trouble me.

This was a period when more investment bankers were being published than ever before, along with technology and management graduates from India’s best institutions.

Aspirational India was yawning and stretching, preparatory to rearing up and taking over the whole business of talking and being heard – in print, in the electronic media, and at literary festivals.

Clearly, it wasn’t the time to be dwelling on “loser” aspects of our population like the vast sections of our urban poor who represent displacement, lack of opportunities, and social neglect. At that time, Shobhaa De’s Superstar India: From Incredible to Unstoppable was written out of her being tired and upset with clichés such as “India is poor, India is backward.”

Although it hadn’t yet been identified as the occupation of “prophets of doom” as was done recently by Solicitor General Tushar Mehta in a hearing about the plight of migrant workers on May 28, 2020, focusing on the poor had its own hazards even in previous years.

A few weeks after meeting the lad from Chhattisgarh and his group, I kept seeing visuals of people walking home from Mumbai, Delhi, Surat, and elsewhere to their homes thousands of kilometers away. What made someone even attempt this task? How did people think they could cover on foot, a journey that would take days and nights by train? Such questions often reminded me of another book I had written in 2012, rubbing shoulders with migrants from many cities, in their avatars as pilgrims – the kaanwariyas who carry water for hundreds of kilometers to offer at Shiva temples across the country in the month of Shravan.

At Haridwar in 2012, I met dozens of men and women from Rajasthan, Haryana, Western Uttar Pradesh, and Punjab. Later that year, I met many groups of pilgrims at Baidyanath Dham in Deoghar from Bihar, Bengal, and Jharkhand. Most of them worked as “migrant labourers” in big cities. As I dined at roadside dhabas with safai karamcharis and carpenters, masons and painters, I discovered that caste distinctions temporarily evaporated while on the kaanwar yatra. I found that people were willing to undergo the suffering of many hundred kilometers of walking as their offering for Lord Shiva.

It the last few decades, it has become very apparent to me that the offering to the deities of their suffering has been appropriated by humans who harvest it in the name of nationalism that is frightening.

(Scharada Dubey is the author of Bol Bam: Approaches to Shiva and Portraits from Ayodhya: Living India’s Contradictions and numerous other books. Views are personal.)