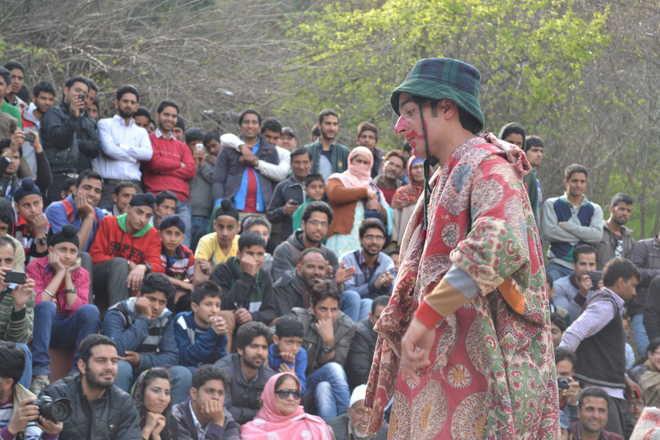 The Indian government and artists must stop to note the role of the Bhand community of Kashmir. RAJA MUZAFFAR BHAT writes from Kashmir on how this tiny community of traditional theatre artists draws the attention of people to laws, regulations, and how to understand and use them.

WHEN farmers affected by the acquisition of land for the Srinagar Ring Road were protesting in the heart of Srinagar city a few years ago, Rayees Wathoori, a young theatre artist made everyone emotional with his performances on the topic. Not only did the protesting farmers burst into tears, I saw tears rolling down the faces of some video journalists who were covering the event as well.

Rayees, 28, belongs to the Kashmiri Bhand community and has been actively creating awareness on various social issues through his plays. In the past, Rayees mostly focused on issues such as dowry, the environment, and women’s rights, etc, but after we met, sometime in 2015, he became familiar with pro-people legislations too.

Rayees decided to reach out to people through the medium of Bhand Theater, which is typical Kashmiri folk theatre whose members belong to a community called Bhands.

The roots of the folk theatre of Kashmir, known as Bhand Paether, are connected with an organised dramatic tradition that existed in Kashmir for centuries. The Bhand Paethar is mentioned in the Nilamata Purana, an ancient text of Kashmir that is said to date back to somewhere in the sixth to eighth centuries.

The Nilamata Purana, also known as the Kashmira Mahatmaya, contains information on its history, geography, religion, and folklore. Kalhan Pandit, a famous twelfth-century historian of Kashmir, cites the Nilamata Purana in his famous book, Rajtarangini.

No member of the Bhand community has been appointed to any of the 266 posts in the government-owned Jammu and Kashmir Academy of Art Culture and Language. ‘This is injustice…The result is that we live in abject poverty and our youngsters are not considering theatre as their profession,’ says Manzoor ul Haq a young Bhand actor.

Bhand actors are skilled enough to stage plays and acts on contemporary social, religious, and political issues, intermingled with their traditional story-lines.

Bhands are multifaceted people, each of them is trained as a dancer, singer, as well as musician. During a performance, Bhand actors narrate stories in such a way that every act seems enthralling. The script of the Bhand Pather performance contains Vakhs and Shrukhs of Lal Ded and Sheikh ul Alam, two great 14th century mystics of Kashmir.

Over the last five or six years, Rayees and his group have given a novel touch to the age-old Band Paether, creating a cocktail mix with modern theatre. Rayees’ theatre group, the Tulkul Arts and Media Collective, has created awareness about the Right to Information Act, the Jammu and Kashmir Public Services Guarantee Act, the National Food Security Act, the Solid Waste Rules, 2016, the Motor Vehicle Act, and many other rules and regulations.

I recall a seminar related to the Right to Information Act organised in 2018, in which Rayees and another theatre artist, Tanveer, had performed. This took place at a college in Srinagar. The then Chief Information Commissioner of the state was the chief guest at the event. He was so excited by the performance that he said, “What we could not do during this one-day seminar, Rayees and his colleague did within ten minutes.”

Rayees had told the audience how to file a right to information application, how to pay the application fees, file the first appeal if the information was denied, and then how to go for a second appeal too. The audience, mostly of young students and teachers, also appreciated that live performance.

On 16 October 2020, which is marked as World Food Day, Rayees, his group, and activist volunteers of the Jammu and Kashmir Right to Information Movement assembled at the Press Enclave in Srinagar to protest against corruption and mismanagement in the Public Distribution System and the non-implementation of the National Food Security Act.

The Right to Food Act was extended to Jammu and Kashmir on 1 April 2016 (although Article 370 was still intact at the time), by the Peoples Democratic Party-Bharatiya Janata Party coalition government. This law provides a highly-subsidised ration of wheat flour at Rs. 2 per kg and rice at Rs. 3 per kg to about 75 lakh people in Jammu and Kashmir who have been listed as Priority Households.

At a seminar on the RTI Act, Rayees and Tanveer told the audience how to file an application, pay the fees, etc, through their performance. The State Chief Information Commissioner was so happy that he said, ‘What we could not do during this one-day seminar, Rayees and his colleague did within ten minutes.’

Another 45 lakh people are listed in the Union Territory as Non-Priority Households, who pay slightly more for rations. What this means is that more than 95% of the population of Jammu and Kashmir is covered by the Food Security Act. However, the benefits of this law do not reach every deserving family.

Rayees has been instrumental in creating awareness about this law through the medium of theatre. Besides, on World Anti-Corruption Day, Rayees often performs in colleges and schools.

Rayees and his team of young artists have created a lot of awareness on the Municipal Solid Waste Rules, 2016, and their implementation over the last few years. They are actively involved with the Information Education and Communication work done by the Srinagar Municipal Corporation as well.

Besides, the group has been trying its best to sensitise people and the government on the Swachh Bharat Mission (Gramin) programme, under which solid-liquid waste management activities are to be taken up in rural areas.

Wearing a traditional Kashmiri long gown known as pheran, with a garland of plastic trash (especially potato chip packets and PET bottles) Rayees has performed near the banks of the Dal Lake in Srinagar on many occasions. This is his way of asking people not to litter in the lake and to keep it and the surrounding areas clean. He has been urging the government to implement the 2016 rules through his shows as well.

Rayees started working as an artist at the tender age of eleven. He learned Sufiyana music and plays the Kashmiri sitar as well. When he was around 17 years old and a student of the government higher secondary school at Wathoora, Rayees got a platform to showcase his talent.

While Rayees was a student at the Amar Singh College Srinagar as well, he performed in many street plays and Bhand Paether. Around this time, he joined the Actors Creative Theatre, Srinagar, where he got professional training on modern theatre. He has also done a post-graduate diploma in Folklore and Cultural Studies.

Rayees was approved as an artist by All India Radio Srinagar in 2015. Despite being a well-qualified young man, fit for a job in any prominent theater group or cultural organisation run by the government, Rayees thinks his future in Kashmir is bleak.

“Bhands are registered as a backward class or Scheduled Caste in [different states of] India but unfortunately the Bhands of Kashmir do not have a surname ‘Bhand’. Thus we are deprived of reservations in education and government jobs,” Rayees told The Leaflet.

The Bhands are a rural community whose members traditionally did not own land. Nor are they employed in government service of any kind. “Theatre art is dying and the Bhand community artists are working as farm labourers or construction workers to make ends meet. The government has not helped us at all. Even people like me, who are trying their best to keep Bhand theatre alive, get no support from authorities, especially the Department of Culture,” says Rayees.

Theatre is a cultural phenomenon that demands that society examines itself in the mirror. Coming together as a community to listen to opposing points of view is necessary for social progress. Folk theatre is the best medium to spread legal awareness, but it has just not been explored yet.

Manzoor ul Haq is another renowned young Bhand actor. He is the youngest surnai and santoor player of Kashmir and is trying to keep Bhand Paether alive. He has similar feelings about the future of the community and its theatre. “Not a single person from our community has been appointed in the government-owned Jammu and Kashmir Academy of Art Culture and Languages,” he says.

Out of the 266 sanctioned posts in the institute, there is not one post available for folk theatre trainers, Manzoor ul Haq says. “This is injustice towards us. Our community is educationally and economically backward, but we have to compete with people from highly-educated families. The result is that we live in abject poverty and our youngsters are not considering theatre as their profession,” he adds.

The patron of the National Bhand Theatre, Ghulam Mohiudeen Aajiz, told Leaflet that the Bhands are a very tiny community with no influence on political parties.

“We are not a good vote bank for politicians. Our population is not more than 50,000 across Kashmir. That is why we have been ignored by successive governments,” he says.

Ever since the Forest Rights Act was rolled out in Jammu and Kashmir, Rayees has been trying his best to make sure that the Scheduled Tribes, pastoralist communities, and other traditional forest dwellers become aware of this law.

The Bhands are a rural community whose members traditionally did not own land. Nor are they employed in government service of any kind. ‘Theatre art is dying and the Bhand community artists are working as farm labourers or construction workers to make ends meet,’ says Rayees.

I, too, try my best to utilise his talent, but this will not make their art sustainable. It is the government that has to support the budding theatre artists of Kashmir and revive Bhand Theatre. Live theatre helps promote social discourse, dialogue, and it can potentially usher in social change.

Theatre is a cultural phenomenon that demands that society examines itself in the mirror. We can study social problems and attempt to find solutions through art forms such as theatre. Coming together as a community to listen to opposing points of view is necessary for social progress. Folk theatre, above all, is the best medium to spread legal awareness, but it has just not been explored yet.

(Raja Muzaffar Bhat is a Srinagar-based activist, columnist, and independent researcher. He is chairman of the J&K RTI Movement. The views expressed are personal.)