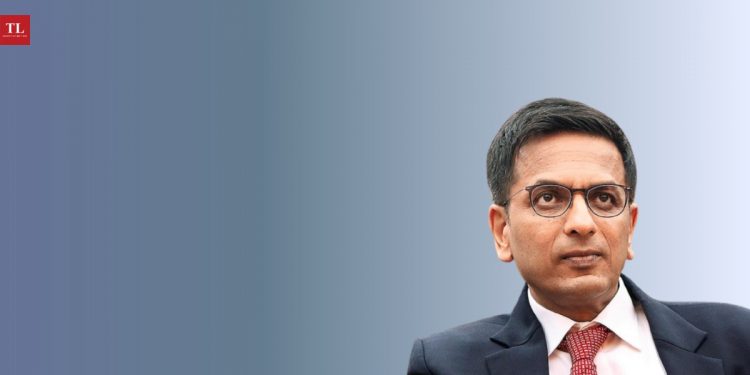 JUSTICE D.Y. Chandrachud of the Supreme Court on Monday called for a healthy balance between the use of technology and human intervention to enhance the experience of the justice delivery system. He said while technology is the facilitator of change, it is the human mind alone that will remain its driver.

Justice Chandrachud was speaking via video conferencing after virtually inaugurating a ‘justice clock’ that has been set up in Gujarat High Court along with its e-version on its website, as well as an e-court fees system for all the courts in the state.
Gujarat High Court becomes the first in the country to have a ‘justice clock’, which is an outdoor display LED wall within the court premises to display disposal and pendency of cases, etc.

“A healthy balance between the use of technology and human intervention has to be maintained. Technology, we must understand, is the facilitator of change, but the driver of change has been, is, and must continue to be the human mind. The only limitation on the human mind is human commitment to change and to adapt,” said Justice Chandrachud.

“We can never forget the human face of justice which lies on the back of all technologies,” he added.

Lauding the new initiatives of the Gujarat High Court, he said technological enablement of the judiciary has been made possible “through constant deliberation, coordination and cooperation” among the High Courts, the Central and state Governments, and other service providers.

Justice Chandrachud, who is also the chairman of the e-Committee of the Supreme Court, said technology has taught the judiciary, which is criticized for being “oblivious to time” to “respect time value of all stakeholders.”

“Unfortunately, it is true we forget the clock while we do justice. In a way it is good we forget the clock, because judges work oblivious to the demands of time. Once you handle a case in the court, no case is big, and no case is too small, because it represents a human face behind a dispute. But equally, technology has taught us we must respect the time value of all stakeholders,” he said.

The Supreme Court judge further said technology should bring about “transformation, and not just automation,” and also urged judges, members of the bar and other stakeholders to “adapt to the needs of technology, because technology is here to stay.”

He said the next step should be evaluating the process of using Artificial Intelligence (AI) technology in court processes, and appealed to the Gujarat government to use AI for better-predicted outcomes of land acquisition cases as well as those related to motor accident claims.

“There is a strong message in this for all of us, that technology has completely transformed our lives. And it is important we as judges and stakeholders and members of the bar adapt to the needs of technology because technology is here to stay,” he further said.

The technological milestones reached by one HC will serve as an inspiration and provide a template for best practices that others can learn from, and such sustained cooperation would enable stakeholders to reduce regional disparities at the level of technological development and adopt the best standards, he added.

Sharing data from the National Judiciary Data Grid, Justice Chandrachud said there are a total of 1.52 lakh cases pending in the Gujarat High Court, with 59 cases being more than 30 years old. The oldest pending civil case dates back to November 12, 1981, and the oldest criminal case dates back to 1990, he said.

The oldest pending criminal case dates back to September 28, 1976 in Rajkot, and the oldest civil case is pending since April 26, 1974 in Ahmedabad court, he informed.

At the same time, since the COVID-19 outbreak triggered a lockdown from March, 2020 till January 17, 2022, 19.57 lakh cases were registered in Gujarat courts, out of which 15.95 lakh were disposed of, he said, adding that such unique figures will serve as a role model for the world.

At the programme, Justice MR Shah of the Supreme Court said the justice clock system will also enhance transparency and accountability and will show the “real truth” that judicial officers are not sitting idle.

Justice Bela Trivedi of the Supreme Court said such projects are meant not only to bring transparency and accountability in the judicial system but also automate the processes in accessibility of information to the stakeholders.

Justice Aravind Kumar, Chief Justice of Gujarat High Court, called the two initiatives as “litigant and citizen-centric,” and said these are the results and fruits of technology, coupled with the vision and efforts of the e-Committee of the Supreme Court.