MR Inquilab Shrivastava is widely acknowledged as having enjoyed the longest reign as the Bollywood’s greatest superstar. Before you go Inquilab who? on me – this is the name given at birth to Amitabh Bachchan. He was named after the revolutionary slogan “Inquilab Zindabad”. Amitabh, after all, was born in 1942, an epochal year in India’s freedom movement, when Gandhiji gave the clarion call for the last major freedom movement “Quit India” against the British, before India’s Independence (1947). 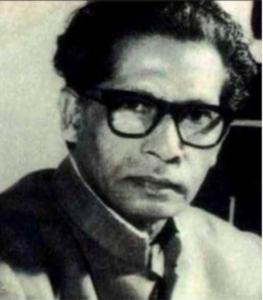 It was the suggestion of the renowned Hindi poet Sumitranandan Pant that his father Harivansh Rai Bachchan- a reputed poet himself-  changed young Inquilab’s name to “Amitabh” meaning “the one with boundless splendour” and boy did Amitabh live up to his new name in the years to follow! Since the father always used the nom de plume ‘Bachchan’ for his writings, Inquilab Shrivastava metamorphosed into a name, that would probably rank as one of the most recognisable names ever in India – ‘Amitabh Bachchan’.

Bachchan’s reign at the top lasted two whole decades. 1975-1995. His twenty year reign at the top, however, can almost be split into two almost equal halves. He was at his absolute apogee in the first ten years. The Midas touch. He gave multiple hits year after year. He starred in outlandish films, did even more outlandish roles, and hence he gets my vote for India’s greatest superstar ever beating Dilip Kumar, Rajesh Khanna and Shahrukh Khan, the respective superstars of their eras.

During the second decade of his superstardom, his hold on the top slot was tenuous, to say the least. But the momentum of the first 10 years almost carried him through. He took a break from films to enter politics. He trounced a political heavyweight- former UP CM Hemavati Nandan Bahuguna- in the 1984 Lok Sabha elections. However, he resigned from his parliamentary seat of Allahabad in the wake of Bofors scandal a couple of years later.

His second innings commenced with Shahenshah in 1987. But unlike the films of the 1970s, the ones made post his return from the Parliament featured Bachchan who was then a poor caricature of himself – aging, tired, and unable to convincingly carry the outlandish roles in masala action movies that he was effortlessly able to do so a decade ago. This was the case except for his roles in a trilogy of Mukul S Anand (“MSA”) movies in this period viz ‘Agneepath’ (1990), ‘Hum’ (1991), and ‘Khuda Gawah’ (1992).

Notably, before Agneepath, MSA had tasted only nominal success as a director. He was bit like Rohit Sharma, the batsman in his early years. Everyone saw the potential. No one saw the results.

Despite delivering monstrous hits, a National Best Actor award eluded Amitabh Bachchan, until this film, whose title was based on a poem written by his father Harivansh Rai Bachchan. When the film was released, it didn’t have the trademark Amitabh baritone voice, and he sounded more like Marlon Brando in ‘Godfather’. However, the alarmingly poor reception the film received in the first week made the producers nervous enough to scurry to the recording studio and re-dub with Amitabh’s original baritone voice. 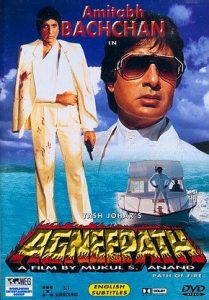 Though this was a mainstream Bollywood film, MSA did give it a ‘neo-noir’ treatment, which makes it one of Amitabh’s more memorable films. Danny Denzongpa’s performance as the lead villain – ‘Kancha Cheena’ – is a reminder that Bollywood has criminally underutilized this fine actor over the decades. Thankfully, MSA recognised Danny’s acting skills. Apart from Bachchan, Danny is the only prominent actor to feature in all three films which are the subject matter of this piece. This film was produced by Yash Johar (father of present movie-moghul Karan Johar, who produced a 2012 remake of this film, starring Hrithik Roshan, which in my view, wasn’t a patch on the original one). 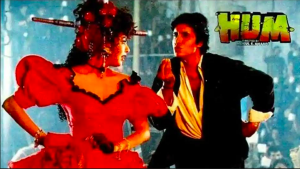 There were two songs that consistently topped music charts in 1991. And in an unthinkable quirk, that only Bollywood is capable of, both the songs were lifted (or “inspired” to quote one of Bollywood’s favourite euphemisms) from the same song and the same singer!  West African singer-musician Mory Kante’s songs ‘Tama’ and ‘Yeke Yeke’ were the “inspiration” behind ‘Jumma Chumma De De’ from ‘Hum’ and ‘Tamma Tamma Loge’ from the Madhuri-Sanjay Dutt starrer “Thanedar”.

The manner in which ‘Tiger’ (Bachchan) seeks to persuade ‘Jumma’ (Kimi Katkar) to give him a “Chumma” (Kiss) would egregiously violate every known sexual harassment laws in force, anywhere in the civilised world. Kimi Katkar was teased, tossed, pulled, groped, bounced, man-handled, drenched by a hose pipe, slathered with beer foam and had parts of her outfit ripped apart at various times during the 7:57 song, in a vain attempt to resist giving the “Chumma” as demanded by Bachchan. 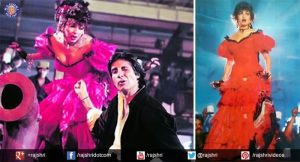 Full credit however to Ms Katkar. With the iconic red number that she wore and the unabashed ‘chest bump’ to Bachchan, she more than matched the concupiscent calls for a kiss by the Superstar and the active ministrations of dozens of his minions – the supportive dockyard co-workers – who proffered their unqualified amorous support to Bachchan’s most libidinous effort ever on screen, at obtaining a kiss from his leading lady.

I suspect our Supreme Court judges were innocent of the ways of this song (Justice is supposed to be blind, remember!). I say this because had they witnessed the travails that Kimi Katkar had to resolutely endure in this song, then the “Vishakha Guidelines” would have been introduced by the Apex Court at the start rather than towards the end of the 1990s! 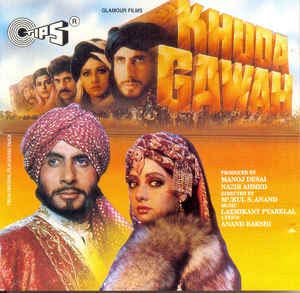 Amitabh Bachchan could still pull it off as an honour-bound Afghan but it was a bit rich to have a Sridevi, with her heavy Madras-centric accent, pass off as an Afghan princess, that too well versed within the intricate and taxing sport of ‘Buzkashi’ (Afghanistan’s national sport, literally called “goat-grabbing” by horse riding men). She wore a heavily embroidered Afghan costume with fancy headgear and this was sufficient for her to transit from Kilpauk to Kabul. MSA won his first and his only Filmfare Best Director Award for this movie. Parts of this film were shot in actual locations. This was Afghanistan, after Rambo III but before Osama Bin Laden. 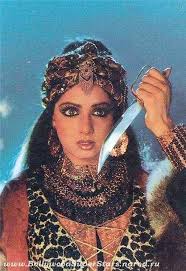 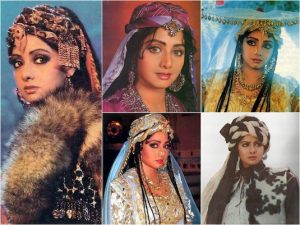 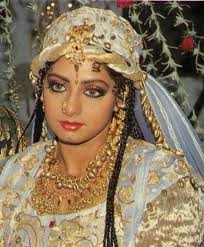 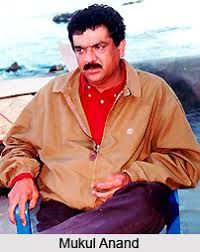 MSA passed away due to a heart attack when he was merely 45. He was shooting for a film in the USA. In a span of a dozen odd years, MSA managed to notch up a reasonably formidable filmography. He directed Vinod Khanna’s (fresh from a four stint at cleaning toilets and gardening at Osho Rajneesh’s commune at Oregon, USA) comeback film ‘Insaaf’ (1987). I always felt his best years were ahead of him and fate snatched him before he could actualise his potential.

Yet the three films he helmed with Amitabh Bachchan, in three successive years from 1990 to 1992, were not only the best films he ever made but also the best that Bachchan starred in the 1990s. A decade which was the last and possibly the worst decade for Bachchan as the lead actor, before the thespian graduated to avuncular ‘character’ roles at the turn of the millennium – Mohabbatein and Kaun Banega Crorepati (KBC) in the year 2000.