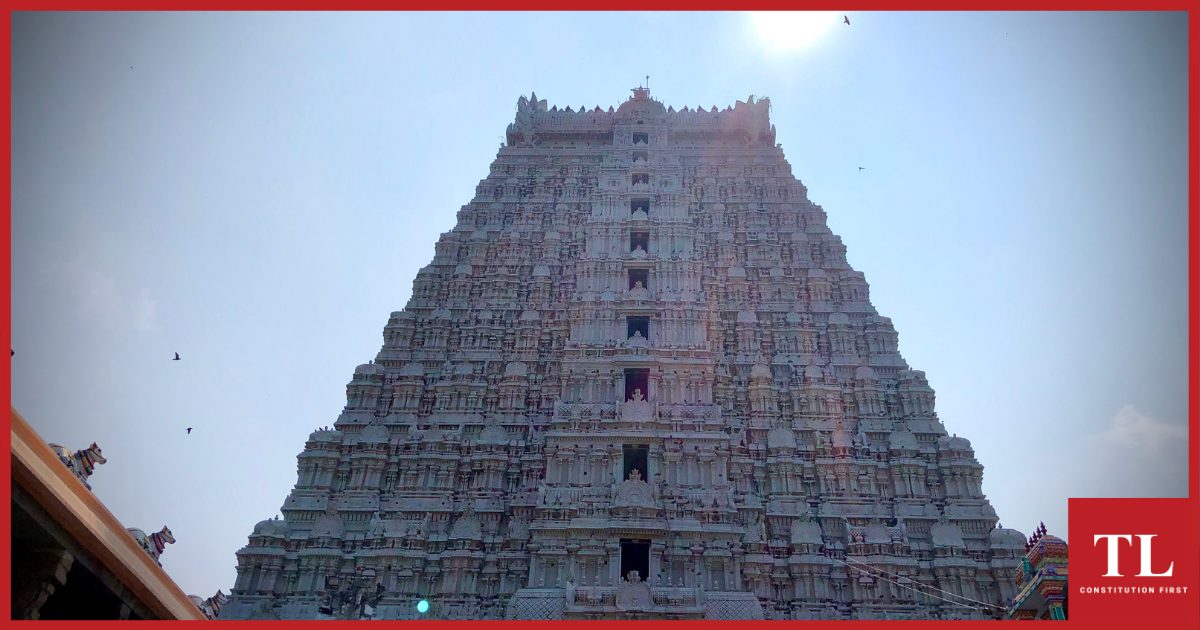 ‘Free TN Temples’: Is It a Misleading Campaign?

The right–wing forces have stepped up their campaign to ‘free Tamil Nadu temples’ from state control. The Vishwa Hindu Parishad (VHP) and other Sangh Parivar affiliated organisations have been at the forefront of the move for a long time, with the self-proclaimed ‘Sadhguru’, Jaggi Vasudev leading the campaign now. The Bharatiya Janata Party (BJP) in its election manifesto has promised to free the temples as demanded by several right–wing outfits.

With claims of the state government looting the temple money and leaving temples to die, the campaign is on a full flow, but history speaks otherwise. The government has been spending from the public exchequer to restore and renovate temples and the number of temples under the government control continues to increase.

The revenue generated from the temples as donations, the immovable properties, including lakhs of acres of lands owned by the temples and Matts seem to have attracted those with vested interests, say experts.

The Hindu Religious and Charitable Endowments (HR&CE), established through HR&CE Act, 1959, controls over 44,000 temples including 17 Jain temples and that of several Mutts.

The HR&CE needs drastic improvement in its functioning with corruption being a major issue. But abolishing the board and handing over the temples to private managements is unacceptable, says experts.

The campaign primarily projects certain issues and accuses the state government of acting against the interest of the devotees. The website run in support of the ‘free Tamil Nadu temples’, claims that the “East India Company’s policy of grabbing temples still continues after 74 years of independence.”

D Raghunandan of the Delhi Science Forum (DSF) rejected such an allegation and explained the historic background of the East India company taking control over the temples.

“After the collapse of the empires including the Vijayanagar empire in the 16th and 17th century, the political instability made way for the ‘panda system’, replacing the temple management or trust. Then the temple administration was taken over by the East India Company to prevent the unscrupulous private parties siphoning off the wealth of the temples,” Raghunandan said.

The East India Company and subsequently, the British Empire continued their benign control over the temples during their regime. The management of temples by the state is peculiar to South India, which also existed in the erstwhile Madras Presidency.

“The temples flourished during this period and the rights of the devotees and the temples were protected,” said Raghunandan.

The enactment of the ‘Madras Regulation 7 of 1817’ was aimed at monitoring whether grants and endowments to temples were utilised properly or directed towards the welfare of the private individuals controlling the temples.

Another major allegation of the promoters of the campaign is the theft of idols from temples. The fact remains that only priests can enter the sanctum sanctorum of the temples, while the right wing forces have been accusing the government of mismanaging the temples. The kingpin in several idol smuggling cases, Subash Kapoor, was arrested in 2011.

The number of temples under the HR&CE department has increased from 36,451 in 2012-13 to 36,615 in 2020-21. The increase in the numbers is attributed to the local communities deserting the temples due to local issues, including enmity among the management committees.

“The state control over the temples continued after independence for the very same reason why the East India Company took control. The department has renovated more than 17,000 temples, in spite of the two dravidian parties following radical policies,” Raghunandan said.

The policy note 2020-21 of the HR&CE department lists the quantum of different works carried out to ensure smooth functioning of temples including the conduct of traditional festivals and poojas. The government has also set up a section for ‘Tiruppani’ (Conservation, Restoration and Renovation), with fund allocation from government grant and finance commission grant.

The government having control over the temples have ensured accessibility to people of different socio-economic status to worship as well.

“The transfer of temples to private management could end up in the devotees being charged a fee for access. The existing equal opportunity for all could come to an end since private institutions depend on patronage resulting in privilege for the patrons and restrictions for others,” Raghnandan said.

While the right–wing forces allege corruption in the HR&CE department, Raghunandan said, “The history of private management has been corrupt and many temples were ruined due to mismanagement of these private boards.”

‘CONSPIRACY TO TAKE OVER TEMPLES’

The temples and Mutts in Tamil Nadu own and manage buildings, lands, and educational institutions. Their total land holdings amount to 4,78,272.34 acres, of which 2.22 lakh acres belong to temples and 56,000 acres belong to different matts. There are 22,600 buildings and 33,665 vacant sites, while the income from such properties stand at Rs 1,219.65 crores during nine years till 2018-19.

“The state has been acting like a patron for the Hindu religion and pays for flourishing the religion. It also holds pathshalas for aspiring priests from different castes, while a private temple could permit only upper caste priests,” Raghunandan added.

Out of the total 44,121 temples including the 5,466 sub–temples, incorporated and unincorporated temples, around 34,000 temples have less than Rs 10,000 annual income, while only 33 have Rs 10 lakh and above and another 672 have between Rs 2 lakh to Rs 10 lakhs. In addition to the income from the affluent temples, the government spends money for the conduct of poojas and festivals.

“For the past 70 years, these forces did not complain of the government paying salary and renovating temples. The present campaign is misleading and a conspiracy to take over temples which have a lot of money. This is purely a battle of the vested interests,” Raghunandan said.

The functioning of the HR&CE is not restricted to managing temples alone. The department runs 54 educational institutions including five arts and science colleges, one polytechnic, 15 higher secondary and eight high schools. It also runs 43 social welfare institutions including six siddha and two allopathy hospitals, along with karunai illam, old age homes and centres for the mentally challenged.