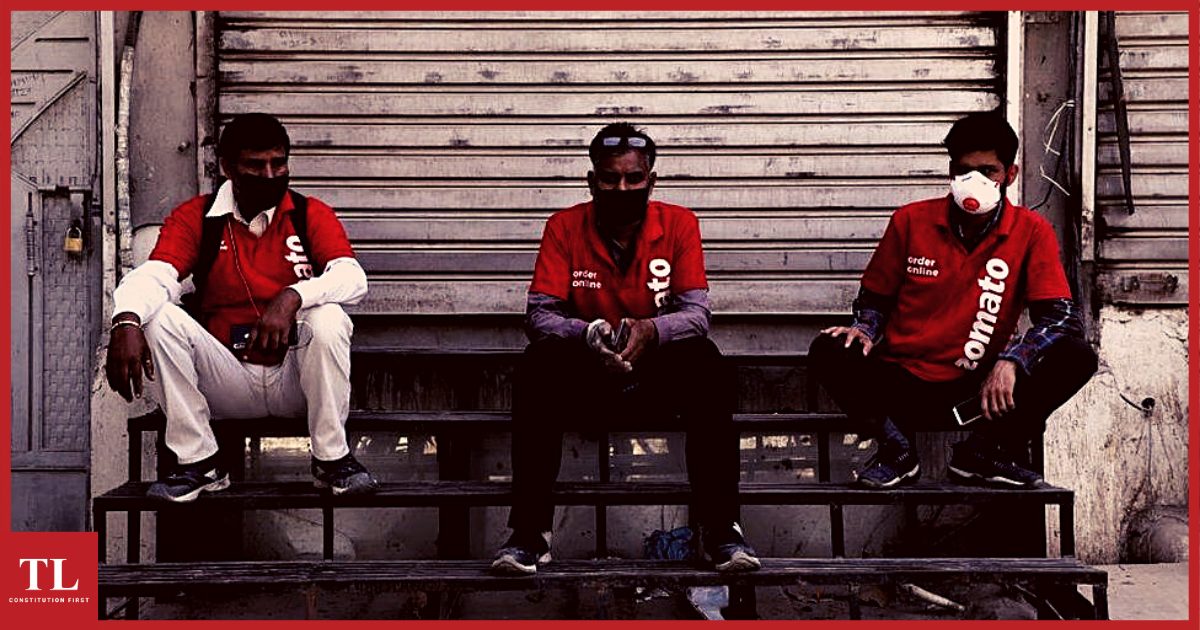 With the lockdown, people are forced to remain indoors and order food and groceries online. But few think of the delivery men and women who zigzag through traffic in the heat to fulfil our demands. Besides meeting drunken customers and hearing casteist slurs, they now face a great threat to their lives due to COVID-19, writes ANURAN SADHU.  A ray of hope comes with India’s new labour codes passed by Parliament in September 2020. It recognised, for the first time, the change in the job market, and the definition of app-based workers as ‘gig workers’ and ‘platform workers’.

Then the Lord said to Moses, “I will cause food to fall from the sky. This food will be for you to eat.”

JESUS is long gone and so are days when “manna’’ fell from heaven. Today, food can be delivered to your doorstep by delivery men and women who live frantic lives zigzagging through traffic, dodging cars and beating deadlines.

Recently, Kamaraj, a Zomato delivery partner, was suspended and arrested by the police (and later released on bail) for allegedly assaulting a woman customer in Bengaluru. Noticing the media attention this case attracted, Zomato agreed to pay Kamaraj’s legal expenses as well as compensate him for his lost earnings. But few are fortunate to get a chance to tell their side of the story. From drunk customers to casteist slurs, these partners have to face it all, along with delivering food fast.

“I have faced many situations where drunk customers have received food. They could barely stand straight,” said Snehasis Roy, a Zomato delivery partner from Kolkata. “Many times, they use foul language for no reason,” added Snehasis, who used to work for UberEats before Zomato acquired it. “The payment at UberEats was good, but it is now owned by Zomato. So I also registered with Rapido, the bike taxi. When I don’t get an order while I am returning, I pick up Rapido passengers to earn extra money.”

Santanu Majhi, a Swiggy delivery partner from Kolkata, tested COVID-positive in February. “I had been delivering food to a COVID patient and a few days later, I had to be admitted to the hospital. This job helps me run my family, so it affected me severely,” he said.

Meanwhile, the second wave of coronavirus brought more bad news for the delivery partners. Mahesh Kumar, a delivery boy at La Pino’s Pizza from Kalka, Haryana, had to bear the brunt of cross-border restrictions. “Kalka shares the border with Parwanoo, Himachal Pradesh. Therefore, we would get many orders from Parwanoo as well before the pandemic. But now because of cross-border restrictions, we hardly get any orders,” he said.

While the pandemic is an unavoidable reality, what can’t be accepted is casteist slurs. Santosh Kumar, a former Swiggy delivery partner from Noida, was at the receiving end of it one day.

“I was abused for being from a lower caste. The customer went to the extent of cancelling the food as I had touched it,” said Santosh.

Impatient customers and unfair demands are the most common problems these partners face. “There are a few customers who are impatient and they keep calling every two minutes,” said Sanjay Singh, 24, a pizza delivery partner of Domino’s from Kolkata. “The constant calling becomes challenging because every time they call, we have to park the bike and answer,” said Virender Singh, a Zomato delivery partner from Sundernagar, Himachal Pradesh.

Another hurdle is when customers ask them to bring cigarettes and chips too. “Sometimes they don’t even request but demand. We have to do their bidding for ratings, though I am not quite sure how this works,” said Aftab Ali, who works for Zomato in Kolkata.

App-based businesses like Zomato and Swiggy control several aspects of a partner’s work and impose numerous conditions which directly affect their earning capacity. Some of these conditions are measured in terms of performance metrics such as order acceptance rate, cancellation rate and most importantly, customer ratings.

“Ratings are really important because that is how the company recognises our behaviour and loyalty,” said Sanjay Singh.

These partners, however, have to keep reminding their customers to rate them. An elated Santanu Majhi said, “I got approved to deliver wine; this is only given to those partners with good ratings and less number of cancellations.”

But quite often, customers forget to do the ratings. “People always remember to file complaints, but often forget to rate us if we are good to them,” said Raj Chaudhary, a delivery man from Chandigarh. Sadly, sometimes customers give just a one-star rating just for fun. “This not only decreases our overall rating but our good name,” said Snehasis Roy.

Also read: Spirit to ‘Fight’ for ‘What We Deserve’ Rises among Amazon India Workers

Delivery partners also have to bear the brunt of flawed navigation systems of some of the app-based food delivery businesses. And the recent hikes in petrol price have added to their misery.

“Our income has decreased significantly since the rise in petrol price. On top of that, the navigation system of Zomato also malfunctions, taking us on longer routes,” said Aftab Ali from Kolkata. While they could take a better route, there is a catch. “If we don’t follow the route that the Zomato app is showing, then it doesn’t consider the delivery and there are times when we don’t get paid,” said Ajay Gurjjar, a Zomato delivery partner from Jaipur.

But it’s not all misery and suffering for these workers. Some clients are grateful too. One such person was Debojit Paul, co-founder of ‘Calcutta 64’, a Kolkata-based restaurant that has been in partnership with Zomato for the last five years. They account for 10-15 percent of the revenue.

On February 18, he treated 10 Zomato workers with free food inside the restaurant. “As a restaurant partner, I believe they are helping us grow in the business and spreading our reach. So these guys are our macro-partners. I have seen many people asking for a glass of water while picking up the delivery parcel and some would remain hungry so that they can meet the delivery timeline,” said Debojit.

He believes there are several ways companies can look after them. Providing the bikers with periodic maintenance for their vehicles and getting their life insured would be a good start, he said.

“End customers should also understand that even they are human and can get late. We should offer them at least a glass of water,” Debojit added.

There are good samaritans who go an extra step to put a smile on the faces of these workers. Snehasis remembers the time he carried a food parcel for a customer who was celebrating his birthday. “He generously offered me the entire food as his birthday treat. These incidents make us enjoy the work we do and it no longer feels like we are being forced to work due to our financial predicament,” said Snehasis.

Sanjay Singh from Kolkata recalls the time when he was offered snacks and sweets by a customer on Holi. “Despite the hardships, this work has respect and dignity. It helps me build my socio-economic status back in my village in Assam,” said Chiranjib, a delivery boy from Missamari, Assam.

Though app-based jobs have existed in India for a long time, the biggest vulnerability of this sector till last year was not being formally recognised by any labour law. This has led to rampant exploitation.

A ray of hope comes with India’s new labour codes passed by Parliament in September last year. Among them, the Code on Social Security, 2020 recognises, for the first time, the change in the job market and the definition of app-based workers as “gig workers” and “platform workers”.

It defines the term ‘gig worker’ as someone whose work falls outside the “traditional employer-employee relationships”.

Under Section 114(1) of the Social Security Code, the Central Government has the power to frame various schemes for the benefit of gig workers in areas such as life and disability, accidental insurance, health and maternity, old age pension, crèche facility for children and other such benefits.

However, one of the biggest criticisms of this reform is that it prohibits the gig workers the right to a minimum wage and to form unions.

These codes come at a time when globally, labour laws are beginning to recognise the contribution of gig or platform workers both in the economy and employment generation.

California passed a law that mandates aggregators like Doordash (a food delivery app) to treat their workers as employees and not as independent contractors, thus providing them with the necessary protection.

In India, as these new labour codes are yet to be implemented, the delivery agents continue to remain on the brink of uncertainty. Their work necessitates working among people and their lives are commodities, ranked on the basis of their ratings. They feed us, with little left for themselves. They deliver on time, irrespective of a pandemic or turbulent weather. Yet, their service is most neglected and goes unrecognised by society. They expect nothing in return from the customer, except a ‘Thank You’!

(Anuran Sadhu along with Debomita De, Suramya Kaushik, Ashish Chandra and Souvik Saha reported this story from various parts of the country. They are students at the Symbiosis Institute of Media and Communication, Pune. The views expressed are personal.)