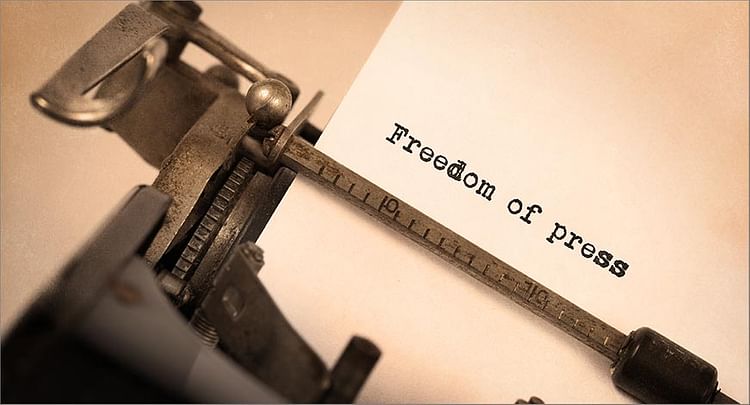 ‘Fishing for Malice’: How Leading Newspaper Editorials Reacted to FIRs of Sedition against Journalists

Anjali Jain·February 5, 2021
Home
Due Process
Democracy and Rule of Law

In the relentless pursuit of muzzling free media by the central government, it has fallen out of favour in the journalism fraternity. Along with the Editors Guild of India, several leading newspapers have strongly condemned the filing of FIRs against journalists, reports ANJALI JAIN.

Six leading journalists along with Congress MP Shashi Tharoor were slapped with First Information Reports (FIR) in six different states in the aftermath of the tractor rally taken out by protesting farmers on Republic Day. They have been accused of allegedly tweeting “misleading” claims about the violence that ensued the rally, particularly in the case of the death of one of the protestors.

The accused include India Today TV’s Rajdeep Sardesai, National Herald’s senior consulting editor Mrinal Pande, Qaumi Awaz editor Zafar Agha, The Caravan magazine’s founder and editor Paresh Nath, The Caravan editor Anant Nath and its executive editor Vinod K. Jose, along with Tharoor. All of them have been booked on charges of sedition, criminal conspiracy and promoting enmity among others, under the Indian Penal Code (IPC). All of them have moved the Supreme Court against the charges.

When eyewitnesses had initially claimed that the protestor had died from police firing, the accused had reported it to be so. However, when the police released footage of the protestor’s tractor overturning and causing his death, the previous statements were recanted and clarifications were issued.

The Wire’s Siddharth Varadarajan and Ismat Ara were subsequently booked by police in Uttar Pradesh’s Rampur when they reported the doubts of the protestor’s family about the version issued by Delhi Police.

The Editor’s Guild of India (EGI) has strongly condemned the filing of these FIRs, calling it “an attempt to intimidate, harass, browbeat, and stifle the media.”

The statement issued by EGI added: “This targeting of journalists grievously violates and tramples on every value that our democratic republic stands for. It is intended to grievously hurt the media and prevent it from working as an independent watchdog of Indian democracy.”

The Editors Guild of India condemns the intimidating manner in which UP and MP police have registered FIRs against senior journalists, for reporting on farmers’ protests in Delhi on Jan 26. EGI finds these FIRs as an attempt to intimidate, harass, and stifle free media. pic.twitter.com/Mf3albnYvs

Along with the EGI, several leading English dailies have come out in support of the accused, taking a strong stance against the filing of FIRs against members of the journalism fraternity.

In Search of Malice

In its editorial about the incident, The Hindu has called it “an instance of fishing for malice where there is none.” The editorial noted that the Gautam Buddh Nagar police have gone “overboard in their response to tweets that reflected an early, and factually incorrect, piece of information.”

It highlighted the “strange” way in which the police and complainants have tried to link the violence that erupted on January 26th with a “piece of misinformation that had circulated for a short period of time.”

“For one thing, the clashes between some of the protesters and the police had already started when the lone death among the protesters occurred; and, second, the position was clarified in a short while”, it added.

Agreeing to the statement issued by EGI, it noted that “it was natural for journalists to report emerging details on a day of protest and action at a time when several reports were coming from eyewitnesses on the ground and the police. It is a matter of concern that there is an attempt to portray these early versions as intentionally malicious.”

The editorial expressed “little surprise” in the invocation of sedition charges against the accused as “it is part of the now-familiar practice of weaving a narrative of an imagined threat to national security whenever some sections of the police get an opportunity to slap criminal cases against journalists and dissenters seen as critical of the current establishment.”

It was also critical of the conspiracy charges being invoked by the police as it is “exasperating” to believe that all the accused were acting in concert while reporting similar information.

It concluded by saying: “There is little doubt that the registration of cases in two States different from the place where the farmer-protester’s death occurred indicates an attempt to build a narrative that media misreporting led to some of the violence that day. It also shows a tendency not to miss an opportunity to harass and intimidate journalists.”

The Indian Express’ editorial on the issue, headlined “With FIR and favour”, opened with a strong stance in a strapline that said: “Weaponising the law to book farmers government had engaged with, throwing IPC at journalists, is not policy. It won’t work.”

Opening in support of the agitation and its leaders, the editorial noted that it was unfair for the police to indiscriminately name those farm leaders in their FIRs who have been negotiating with the centre for months and have been leading a peaceful protest for months. It added that “the Delhi Police, under the Home Ministry, is tarring the agitation opportunistically and unfairly.”

In the case of booking journalists, the editorial noted: “When large sections of the media are seen as untrustworthy, unquestioning and partisan, and when their legitimacy is sought to be undermined by populism and majoritarianism on one side and the no-rules world of social media on the other, the onus is on the media. To protect their space and their professional standards with the only tools at their disposal: Fair and accurate news-gathering.”

It added that for Uttar Pradesh, whose own image is tarnished with several encounters and the burning of the body of the Hathras rape victim, “to slap charges of sedition and criminal conspiracy against journalists is bizarre.”

It concluded that the onus of moving forward remains with the centre, which should acknowledge restraints to its own power while protecting the freedoms guaranteed in the constitution.

The stance of the Times of India (TOI) has been cemented in its editorial headline: “Stop intimidation: Withdraw criminal cases against journalists.” While noting that the charges of sedition “smacks of intimidation rather than any real concern for rule of law”, the editorial piece has compared this move with that of the British Raj, which would use these charges “against Indian nationalists, accusing them of traitorous behaviour.”

Agreeing with the EGI’s stance on the perils of reporting from the front while the action is underway, it noted that: “to construe these actions as malicious and intended to destroy communal harmony and incite violence equates to shooting the messenger.”

TOI said that repurposing sedition against journalists is a violation of the founding principles of our democracy, which is “to recognize the rights of news media to report without fear or favour.” It added: “Likening its watchdog duties to sedition betrays a crooked view of democracy.”

It concluded by calling upon the Supreme Court to “take cognisance of how its guidelines narrowing the applicability of sedition have fallen on deaf ears.”

In its editorial dated February 1st, the Hindustan Times (HT) began by calling on journalists to only report the news after verification when the events are still underway, especially while reporting on a sensitive subject such as this. “Journalists who got it wrong must introspect; the temptation to shoot off tweets without verification must be resisted; and media institutions must have stronger vetting processes,” it added.

However, HT also expressed how “this cannot justify what appears to be a politically-driven campaign to legally entangle journalists for a host of crimes they did not commit.” It noted that it is wrong for a mistake in reporting to be constituted as a conspiracy against the state.

It concluded: “The fact that fake news and hate speech are a staple on Indian news television — but little is done about it since it often suits powers-that-be — lends the current case an air of selectivity. Even as the media must improve its reporting standards, the political regime must step back, for FIRs will have a chilling effect on free speech and liberty.”