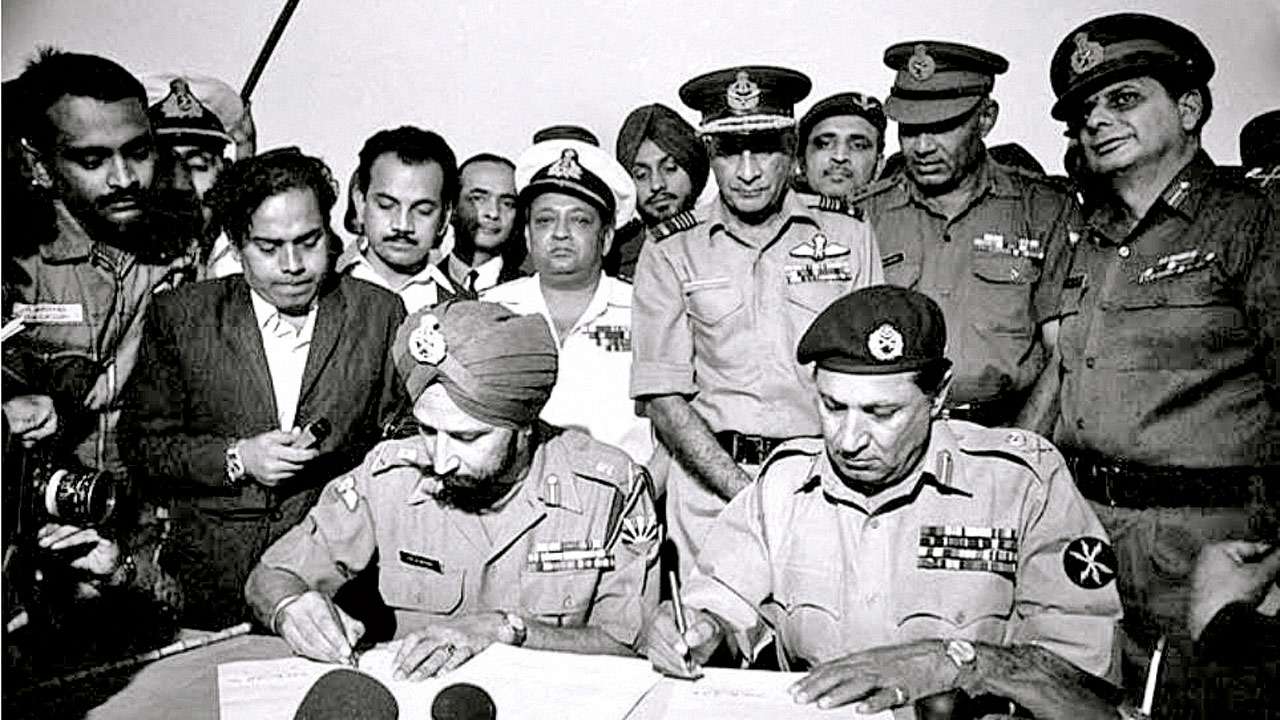 The instrument of surrender being signed in Dhaka on December 16, 1971
AnalysisDemocracy and Rule of LawHistoryPolicy

Fifty Years of Liberation of Bangladesh from Pakistan

1971 was the golden year of Indian diplomacy, writes NITYA CHAKRABORTY.

On December 16, fifty years ago, the India-Pakistan war over Bangladesh liberation ended with great Indian victory under the leadership of Prime Minister Indira Gandhi.

The year 1971 was the golden year of Indian diplomacy as the Indira Gandhi Government took significant steps in ensuring that the nations throughout the world understand the genuineness of the demand for a separate nation by the Bangladeshi people. This was in March 1971 when Pakistan army cracked on the eastern part to nullify the result of their recently held elections resulting in persecution of lakhs of people, mostly Muslims, and their consequent crossing over to the Indian side, mainly West Bengal, Assam and Tripura

As a young reporter in IPA under Nikhil Chakravartty, I had the good fortune to watch the developments unfold before me from March 26 to December 16, 1971 when finally, the Pakistan army led by General Niyazi surrendered in Dacca, the then capital of eastern Pakistan. But the most interesting day among them was December 3, 1971 as it was that evening when India officially went to war against Pakistan.

The year 1971 was the golden year of Indian diplomacy as the Indira Gandhi Government took significant steps in ensuring that the nations throughout the world understand the genuineness of the demand for a separate nation by the Bangladeshi people.

Our IPA office was at Hanuman Road, near Connaught Place, Delhi back then and every morning at 10 AM, Nikhilda used to come and hold the meeting of reporters. I was in office that day before 10 AM as there were incessant fighting for the last few days and there were rumours that the full-scale war between India and Pakistan will start soon. Just after 10 AM, I got a phone call from Nikhilda informing me that he wouldn’t be coming to office that day and that I should be ready for work till late night.

It struck me immediately.

Ours was a news analysis service and we generally closed by 4 PM. Then why had Nikhilda said so. I went to the PIB at noon, for the briefing used to take place twice in a day, at 12 noon and 6 PM, to apprise the media of the day-to-day developments on the border and the updated policies of the Indira Gandhi govt.

PIB was full of foreign journalists at that time, many of them back from the visit to the liberation areas in the eastern part. The top names of western journalism included Peter Hazelhurst of The Times and Sydney Shemberg of New York Times. R C Dutt, the cigar smoking ICS secretary of the Information Broadcasting, briefed the press but gave no indication that something significant was in progress.

“Gentlemen, I am late because we are now at war. Pakistan has attacked India on the western front and India has retaliated. We are officially at war.”

Mohan Ram, who was then working for The Mail of Madras used to send stories by afternoon as his paper was an afternoon daily. He was a good friend of mine and I gave him tips from time to time. He came to me and asked me for some big lead as he was fed up by writing every day that the confrontation is intensifying, with nothing happening so far.

I took the risk and told him something big might happen tonight. You can start your story by writing that a Full-scale war is imminent, I said. We had a bet over a bottle of whiskey. If something big happens, Mohan will offer me one and if nothing happens, I will offer him the bottle.

At 6 PM, PIB press room was crowded with media people, both Indian and foreign. Suddenly there was full blackout and the siren started in an ominous manner. The briefing did not start and there was impatience among the press people.

After quite some time, R.C Dutt appeared and the correspondents started complaining that they were waiting for too long. Dutt, the scion of the legendary Dutt family of Hatkhola of Kolkata and belonging to famous ICS historian Ramesh Chandra Dutt and the British Communist leader Rajani Palm Dutt, stared at the press persons like a Hollywood star and then said, “Gentlemen, I am late because we are now at war. Pakistan has attacked India on the western front and India has retaliated. We are officially at war.”

He informed that the Prime Minister Indira Gandhi was in Calcutta addressing a meeting. The emergency meeting of the union cabinet will be held after she was back and the briefing would be held at night after 9 PM.

Thus, she told the Soviet leadership candidly that India had no expansionist ambition and not an inch of territory of Pakistan will be taken by India.

The reporters rushed. Mohan Ram came to me and said you have won the bet. All of us rushed to file the story. I had to send my paper to Calcutta through press telegram and so I went to the Eastern Court and sent it. Then both Mohan and I attended the late-night briefing and went to Mohan’s office. We drank to our heart’s content and I was happy that I won the bet though the war cost thousands of lives.

I remember in one briefing, attended by K B Lall and R.C Dutt jointly in the course of the ongoing war, a foreign correspondent tried to be provocative with his anti-India slant question. Dutt gave him such reply in his baritone voice that post that incident the foreign correspondents never asked him any further slanted questions.

Indira Gandhi’s strategy was so well made and executed with such professional expertise that it led to many Muslim nations extending their support to her, instead of siding with Pakistan. The first was the signing of the Indo-Soviet Treaty on August 9, 1971.

This unequivocal stand helped India in getting full military backing during those days even when the USA threatened India with its Seventh Fleet and India equally replied that it would take adequate retaliatory measures.

By that time, she was convinced that the US will solidly stand against India as both Nixon and Kissinger disliked her and can even take the risk of siding with Pakistan. Thus, she told the Soviet leadership candidly that India had no expansionist ambition and not an inch of territory of Pakistan will be taken by India.

India’s only wish was to see Bangladesh emerge as a free and independent nation.

This unequivocal stand helped India in getting full military backing during those days even when the USA threatened India with its Seventh Fleet and India equally replied that it would take adequate retaliatory measures. Soviet fleet was alert and followed giving rethinking among Nixon-Kissinger camp that another Cuba episode should be avoided.

1971 was that way the year of Indira Gandhi too. I tried to find out later whether it was all planned for Indian foray on December 3 in a planned manner or it was really the retaliation by India of Pakistani attack on December 3 evening. I enquired about this from Nikhilda many times, but he cleverly avoided answering. I got hold of P. N Haksar once when he was the deputy chairman of the Planning Commission. He started laughing and avoided the answer by saying ‘let us discuss about planning commission.’ In any case, whatever the truth, it was a superb feat of Indira Gandhi in 1971. (IPA)

(Nitya Chakraborty is a veteran journalist and the editor-in-chief of India Press Agency. Views are personal.)