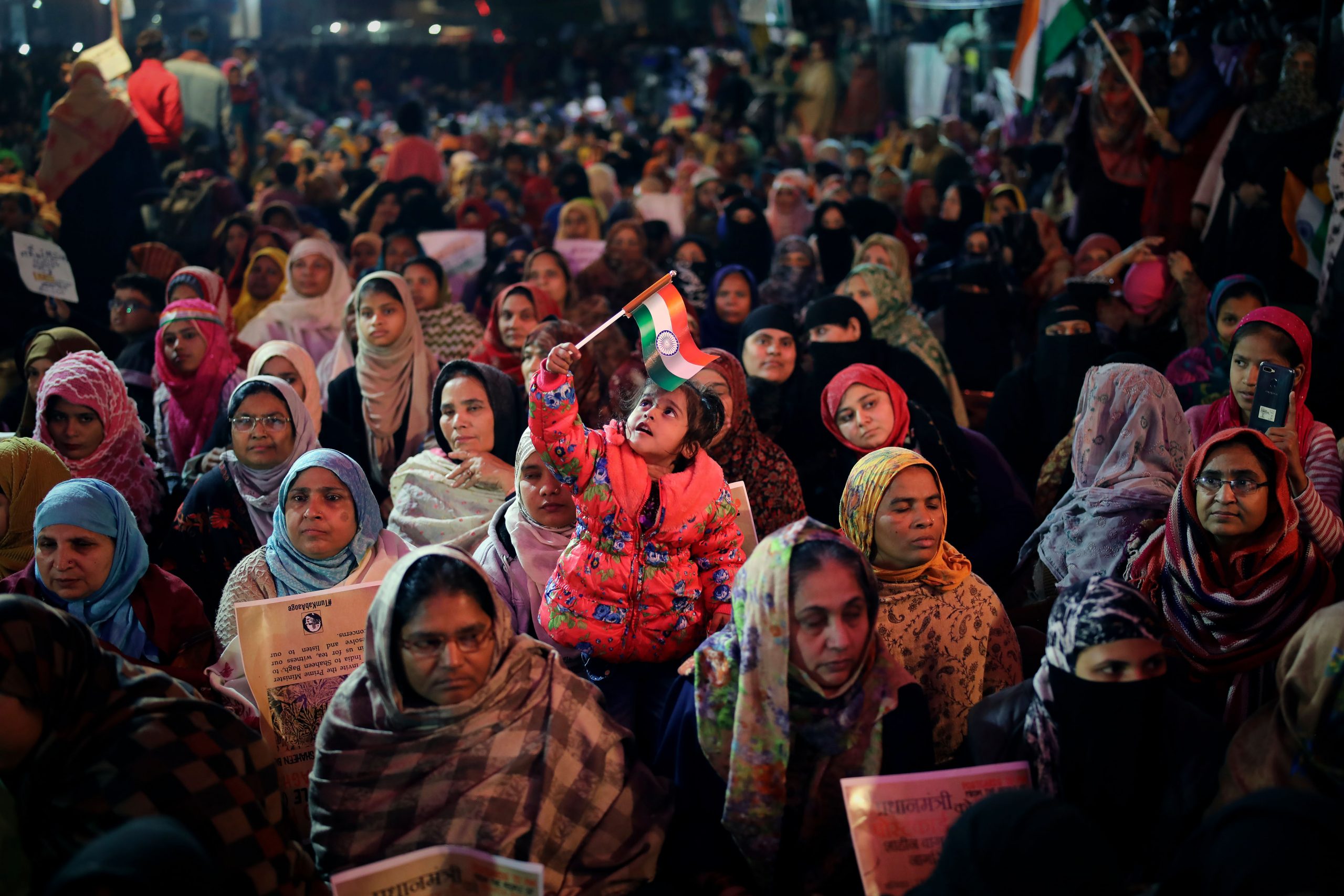 As dictatorial governments crackdown on dissent, female dissenters have come to the forefront, be it in Hong Kong,  Poland, Mexico, Israel, Guatemala or India. Though dissent was seen essentially as a masculine act, women are now fighting shoulder to shoulder with men to ensure that their rights are respected. And it is not instantaneous, impulsive anger, but concerted, conscientious, sequenced action against the infringement of their rights and liberties, writes PRIYANKA PREET.

Succeeding generations will perhaps remember us as a generation of dissenters–forever resisting, sloganeering, thriving and rebelling. But they must also remember female dissenters kindly for they have revolutionised the idea of citizenship through consistent dissent.

With the surge of extremist governments across the globe and the consequent contracting of rights and liberties, female liberties and security are at greater peril than ever before. In such debilitating circumstances, one would have ordinarily expected a defeating, subservient form of citizenship being practised. However, as the year progressed, the pestilence became steadfast and so did dissenters, specifically, female ones. The year not only exposed the rot in health infrastructures, but also female disgruntlement at governments’ escalating encroachment in practically all spheres of their lives as citizens.

The traditional theories of citizenship by philosophers Ronald Dworkin, John Locke and John Rawls envisaged citizenship as a contract with the government where citizens are largely self-interested individuals who have chosen (contracted) to respect each other’s liberties. The government is charged with the duty of enforcing this respect, simultaneously providing its citizens protection and regulation to preserve their ability to pursue diverse interests in a marketplace. In a sense, a citizen was at the mercy of the State, willing to put aside her individual interests if need be, for the greater good of public order, rule of law and peace in the society.

In India, this concept will be fairly familiar as some citizens treat the government as their “mai-baap” for all intents and purposes. However, B.R. Ambedkar regarded citizenship as a bundle of rights such as (1) personal liberty, (2) personal security, (3) rights to hold private property, (4) equality before law, (5) liberty of conscience, (6) freedom of opinion and speech, (7) right of assembly, (8) right of representation in a country’s government and (9) right to hold office under the State. To him, the rights of representation and to hold office under the State were of special significance while exercising one’s citizenship.

The traditional theories of citizenship by philosophers Ronald Dworkin, John Locke and John Rawls envisaged citizenship as a contract with the government where citizens are largely self-interested individuals who have chosen to respect each other’s liberties. The government is charged with the duty of enforcing this respect, simultaneously providing its citizens protection and regulation.

Ambedkar’s perception was integral in vesting citizens with rights and liberties and allocating them primacy in the functioning of a democracy. Thus, from merely securing and surveilling its citizens’ contractual obligations, the State’s duty got augmented to granting a “life of leisure and culture to each one of its citizens”.

Twentieth-century independence movements and burgeoning female activism have been a rich source for evaluating the meaning of dissident citizenship in the most unadulterated manifestation. This novel variety of citizenship necessitates the presence of courage and discourse and to that end, would witness the marginalised, out-casted, pushed-to-the-brink variety of individuals who challenge the existing power dynamics by means of legitimate democratic tools such as protests, hunger strikes, sloganeering, sit-ins, imageries, et al.

Here, the citizen would leave the existing channels of voting and petitioning the Executive or the Judiciary for reasons of inadequacy. Therefore, if traditional notions of citizenship are about “the collective and participatory engagement of citizens in the determination of the affairs of their community, then marginalised dissident citizens who address the wider polity in order to change minds, challenge practices, or even reconstitute the very boundaries of the political itself engage in a form of democratic citizenship that is essential for the continuing revitalisation of democratic life”.

Courage and resistance are inherently viewed as masculine traits and therefore, female dissident citizenship has not been fully credited by mainstream media. In the Hong Kong protests, for instance, female dissenters have been at the forefront while risking sexual violence by the police with the campaign #protesttoo. Jordyn, a protestor, makes a resonating remark, “I am not a brave person at all, I am not physically strong but we girls have all toughened up.”

Protests often become sites of “heightened manliness” as men are perceived as forerunners while clashing with enforcement authorities, shielding women from tear gas, lathis and other attacks and spearheading movements. But the imageries emanating from Hong Kong, Poland, Mexico, Israel, Guatemala and India are distinct this time. In Hong Kong, a woman was sentenced to three months’ prison for “attacking” an officer on his arm with her breasts. This sparked the “Breasts are Not Weapons” movement and protestors (men, women, trans-persons) adorned colourful bras to protest the absurd case of “breast assault”, thereby giving a feminist colour to the movement.

Similarly, in Poland, thousands of women gathered across 50 cities to renounce the Supreme Court’s verdict that tightened grounds for women seeking abortion. Poland rapidly became a familiar replica of the Shaheen Bagh protests, with young girls and grandmothers raising banners saying, “Hell for Women” and “I want choice, not terror”. Female dissenters holding hands were frontliners as they stared down the armed police, while men stood behind them, determined to champion their female allies till the very end.

Dissident citizens often resort to creative and pro-active techniques to engage with institutions and people and make their voices heard owing to an exhaustion of existing remedies. Women in Mexico launched the “Day Without Us” strike against surging gender-based killings by enforcement bodies. Women stayed home from schools, universities workplaces and markets and wore purple ribbons in solidarity with each other. Newspapers left blank spaces where female columnists usually wrote. This strike followed physical protests by 80,000 dissenters, with serious clashes between women citizens and the armed police.

In India, the ongoing farmer agitation has some 10,000 female farmers marching towards Delhi to protest the anti-farmer Acts. Their rationale is that the Acts would cause income shortages in their households and they will be compelled to work in unsafe areas and ration their food intake.

Femicides are also rampant in another currently protesting country – Guatemala. Women ignited a string of protests against femicides and sexual violence. This has now culminated into impassioned demonstrations against the corrupt regime for reducing health and education budgets. Demonstrators have employed several tools to make their presence felt, including producing a feminist hymn, carrying banners with the names of the victims and placing a guillotine in front of the Congress.

In India, the ongoing farmer agitation has some 10,000 female farmers marching towards Delhi to protest the anti-farmer Acts. Their rationale is that the Acts would cause income shortages in their households and they will be compelled to work in unsafe areas and ration their food intake. Despite caustic aspersions being cast on their integrity through sexist labels of “100 rupees performers” or “Khalistani terrorists”, the women have stood unperturbed and steadfast in their demand for rights.

The resolve by women is not dissimilar from the one shown by the likes of Rosa Parks. Her iconic act on December 1, 1955, in refusing to give up her bus seat to a white man in Montgomery, Alabama, was not merely frustration from that day’s physical exhaustion, but a conscious, principled performance of dissent as an active member of several anti-segregationist organisations who knew the potential effects of the bus boycott.

Akin to Parks, female dissent across states has not merely been instantaneous, impulsive anger, but concerted, conscientious, sequenced actions against the infringement of their rights and liberties. Amidst several other commonalities, the theme of resourcefulness and preparedness runs consistently in protests across territories.

As the meticulously executed farmer agitation continues unabated and women persist as its backbone, the relationship between the Indian State and female citizenry becomes more strained and perhaps more egalitarian.