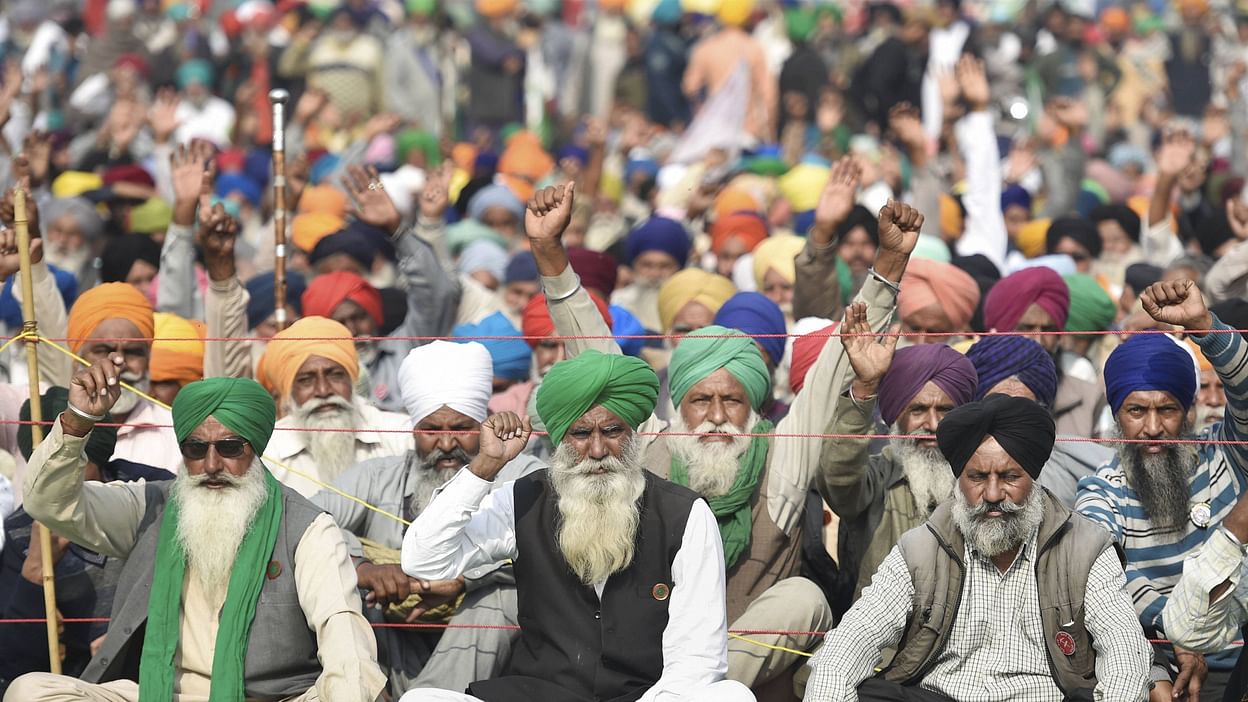 Farmers' protest – an ode to people’s movements in democracies

Prime Minister Narendra Modi’s announcement to scrap the three agriculture regulatory laws is much appreciated, and his statement on Gurupurab is timely. More than the farmers’ win or the government’s defeat, it gives the clear message that the Union Government is listening and responding, or that the Union Government has indeed been forced to listen due to the farmers’ will and resilience, writes SIMRAN SONKAR.

THE Indian government’s decision to repeal the three controversial farm laws on November 19, was made on the auspicious occasion of Gurupurab, or Guru Nanak’s 552nd birth anniversary, just a week before the farmer’s protests would reach their one-year mark.

Indian farmers, particularly those from Punjab, Haryana, and Uttar Pradesh, protested the three bills even before the Indian Parliament passed them. Farmers have been camped at Delhi’s outskirts since November 2020, demanding, among other things, that the three laws – The Farmers’ Produce Trade and Commerce (Promotion and Facilitation) Act, 2020; The Farmers’ (Empowerment and Protection) Agreement on Price Assurance and Farm Services Act, 2020; and The Essential Commodities (Amendment) Act, 2020 –  be repealed.

Also read: What Does the MS Swaminathan Report Say About Reforms Proposed by Farm Laws?

The protesting farmers had been clear that nothing short of a complete repeal would satisfy them. Opposition parties have backed farmers’ demonstrations across the country. Farmers had also chosen to make this an election issue, and in the run-up to the state elections, they had aggressively campaigned against the Bharatiya Janata Party. Most experts believe the upcoming elections influenced the Union Government’s decision in Uttar Pradesh and Punjab, where the issue of farm laws will impact the Bharatiya Janata Party’s election results.

The farmers’ protests have demonstrated how Gandhian principles of peaceful protest in a democracy, combined with unique messaging, can succeed even in the face of majoritarian governments. The movement has resulted in the first successful and fearless expression of opposition to Modi’s government. This essay will show how the farmers’ protest has been a remarkable example of a social movement that has restored faith in Indian democracy’s ability to protect citizens’ right to peaceful protest and make independent decisions.

Also read: By repealing farm laws, Modi govt admits that its law-making process trampled upon the Constitution and legislative intent

Genesis of a social movement

A social movement is a loosely structured but long-lasting campaign that supports a social cause, which usually involves implementing or avoiding change in a society’s value structure. Regardless of their size, all social movements are inherently collaborative. They result from a more or less informal gathering of people whose bonds are defined more by a shared vision of society than by rules and regulations.

The idea that social movements are inextricably linked to social transformation is reflected in all definitions of social movement. Social movement participants do not act as if they believe the social order will remain largely intact. Instead, it reflects the idea that individuals can influence or prevent social change by working together to achieve a common goal. The farmers’ protest is a social movement intending to repeal the three farm laws and enact more significant agricultural reforms. The protest movement has been unique since its inception because it has had no single leader or political allegiance, and it has been sustained collectively and peacefully.

Last summer, protests broke out in Punjab in response to three new agriculture laws that were rushed through to open the country’s agricultural sector to the market. The farming sector, which used to be protected and received government subsidies, drives the Indian economy. The three laws in question — on pricing, agricultural sales, and storage — eliminate safeguards that have kept farmers somewhat protected from market volatility.

When farmers’ unions called for a march to the nation’s capital, numerous farmers travelled to Delhi on their tractors, cars, or on foot, which was a sight to see.

Also read: Why Are Landless, Marginal and Small Farmers the Backbone of the Delhi Protest?

Government’s attempts at blocking the protests

The union government and the Bharatiya Janta Party (BJP)-ruled states of Haryana and Uttar Pradesh used brutal force to stop the protestors from reaching Delhi. Barricades, water cannons, and tear gas shells were used to disperse thousands of demonstrators. In response, tent villages sprung up on the outskirts of Delhi as the government refused to let the farmers enter the city. Village names like Singhu, Tikri, Shahjahanpur Kheda, and Ghazipur have become part of a shared lexicon of civic dissent and cooperation on the city’s outskirts.

While the union government believes that deregulating agriculture will increase productivity and double farmer salaries, many smaller-scale farmers are concerned that private investors will exploit them. The new restrictions do away with the safety net of a government-guaranteed minimum crop rate and the regulated selling system, making cultivators vulnerable to an unregulated corporate arena with little bargaining power against multinational corporations.

Farmers’ concerns are fuelled in part by previous deregulation efforts that exacerbated agricultural hardship. A cautionary example is the state of Bihar in eastern India, where agrarian reform measures led to devastation for farmers.

Since the BJP’s government took power in 2014, Indian and international political experts have repeatedly stated that India has been experiencing a democratic backslide. Critics are correct in that the Modi-led government has used brutal and repressive tactics in dealing with citizens’ grievances, such as the farmers’ protest, to combat criticism and suppress any dissent against the regime. The filing of sedition charges against journalists who used social media to tweet about farmer protests on Republic Day, the nation’s foundation day as a democratic republic, was a low point in the movement. Hundreds of farmers have also died due to the protest movement’s harsh conditions and government inaction.

Village names like Singhu, Tikri, Shahjahanpur Kheda, and Ghazipur have become part of a shared lexicon of civic dissent and cooperation on the city’s outskirts.

The union government is no stranger to authoritarian measures. It passed the three farm laws in September 2020, bypassing the opposition’s demand for more consultation and rushing through Parliamentary procedures based on the BJP’s numerical majority. The move was widely panned both internationally and domestically.

It was not too long ago that in response to the student and civil society organization-led anti-Citizenship (Amendment) Act (CAA) protests, the government suspended citizens’ fundamental right to protest under the Indian Constitution in various parts of the country in 2019. Following the onset of the COVID-19 pandemic in 2020 and the accompanying nation-wide lockdown, the anti-CAA protests lost steam and dissipated. Demonetisation and the 2019 amendment to the Unlawful Activities (Prevention) Act, among several others, have sparked protests and dissatisfaction. However, the Modi government has largely succeeded in suppressing and ignoring these protests, often through draconian measures and force. The farmers’ protest shifted the government’s position, demonstrating how vital our Constitutional principles and democratic rights are in India.

Also read: Recent instances of undemocratic law-making under leadership of “the most democratic leader India has ever seen”

The dubious logic that underpins India’s colossal transition into a capitalist enclosure is revealed by constructing a heavily policed barrier on the city’s outskirts. Physical incarceration and digital persecution of demonstrators are used to silence any opposition to the economic enclosure, the Indian government’s retreat from significant areas of the economy. The concrete and barbed-wire barrier, which resembles a fortification in a war zone outside of Delhi, demonstrates how critical economic concerns and overt Hindu nationalism are to the Modi administration’s foundation. A steady supply of previously closed-off economic sectors is required to keep the country’s capitalist development engine humming.

Farmers’ concerns are fuelled in part by previous deregulation efforts that exacerbated agricultural hardship. A cautionary example is the state of Bihar in eastern India, where agrarian reform measures led to devastation for farmers.

In terms of policy, this entails a never-ending cycle of structural changes, privatization, and public-sector disinvestment, a complex task aided by a regime committed to conducting functions in different ways. This is why the bourgeoisie needs a ruthless head of State who can achieve goals through political means and then through coercive resource liberalization techniques.

Because of the State-capital symbiotic relationship, the Modi government does not tolerate dissent and quickly punishes opponents, including activists and journalists. Despite its governmental clout – it has total power in the government apparatus and poses almost no democratic opponents – the government’s vehement response demonstrates that the anti-farm legislation campaign is the coalition’s most persistent and direct threat to date. The fact that the movement arose and is still achieving its goal amidst a never-ending epidemic demonstrates the farmer’s despair.

Rather than dying out, the farmers’ protests thrive, forming new bonds that transcend various social divisions. The protests have received the public’s long-term support due to widespread discontent with the free-market model, which has resulted in high unemployment and increased economic disparities, rather than distributing money.

Many people are concerned about Hindu nationalism’s majoritarian tendencies and the violent marginalization of minority groups. It is no surprise, then, that peace, resilience, and solidarity have dominated the farmers’ lexicon, the polar opposite of government and its allies’ discourse, which is focused on increasing polarization, hate and exacerbating divisions. Farmers living on the capital’s borders depict a community based on charitable labour and a desire to be accommodative. These sites arose not from any inbuilt bond but rather from a will to form new relationships through the demonstration itself.

Despite its governmental clout – it has total power in the government apparatus and poses almost no democratic opponents – the government’s vehement response demonstrates that the anti-farm legislation campaign is the coalition’s most persistent and direct threat to date. The fact that the movement arose and is still achieving its goal amidst a never-ending epidemic demonstrates the farmer’s despair.

Also read: The Muzaffarnagar Kisan Mahapanchayat rekindles hopes for the reclamation of the Constitution

After so many months, the movement has evolved to form an extraordinary public mobilization in postcolonial India’s democratic legacy, involving a wide range of socioeconomic organizations and combining the fight against unregulated capitalism with the campaign for civil liberties. Protests are being fuelled by a widespread sense of vulnerability, as well as a fear of exploitation by a repressive government and large corporations.

The movement’s victory was long overdue; despite the countless losses of life and hardships, the farmers’ tenacity has reminded India of the power of social and peaceful movements against an authoritarian government in an increasingly polarising and bitter environment.