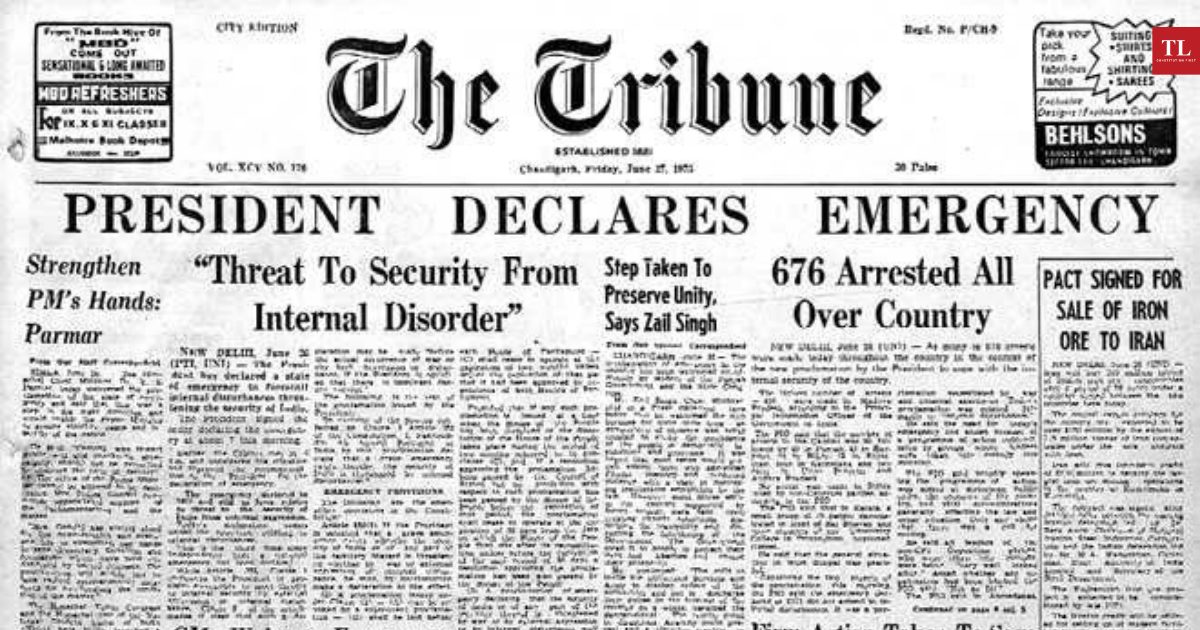 The tendency to underestimate people, see their trust as gullibility is not new. The Indira Gandhi regime made this mistake during the Emergency era, and today the Modi-Shah regime seems to underrate the capacity of the Indian people. Perfectly capable of evaluating the intent and outcome of any government, people ask hard questions of themselves and ruling regimes all the time. If their sheer common sense ended authoritarianism before, it can happen again, writes AJAY GUDAVARTHY.

THE Emergency of 1975 evokes collective memory of the crisis of the nation-state. However, the nature of that crisis differs, depending on how people relate to the idea of a nation. What cannot be denied about the Emergency and its aftermath is how “common sense” prevailed over propaganda. In a manner much too similar to today, a false perception was propagated of a threat to the “unity and integrity” of the nation to cover up economic failures, unemployment, corruption, political instability and a looming crisis of legitimacy.

The Emergency etched in our collective memory how abuse of power can protect narrow private and political interests. How the ideals of nationalism can be mobilised to suspend civil rights, and a threat perception created to pamper the insecurities of the ruling elite. All these are collective lessons the nation learnt from that period.

Yet, the Emergency also reminds us how the robust common sense of a semi-literate population prevailed over the empty rhetoric of the ruling elite. The will to protest over-shadowed the conspiracy to intimidate and eliminate those opposed to the regime. Our understanding of the past is relevant now as we strive to make sense of the future that awaits us. Is India moving towards yet another Emergency? Is it a real-time possibility?

Under the current regime, India has had conditions of exceptionalism of the Emergency kind. The looming possibility of a formal Emergency with the dwindling popularity of the leader is a notion lost on nobody. However, like Mrs Gandhi, the current leader and the RSS assess “the people” poorly. They understand the cultural ethos and symbolic lifeworld of “the people”, but they underestimate those very people.

Simply put, the Modi-Shah duo and the RSS think protest and resistance are only superficial aspects of Indian society. At all other levels, they believe, Indians are more inclined to loyalty, faith and trust.

They feel Indian society suffers from illiteracy and localised thinking, which reminds of the Ambedkar remark that Indian villages are “a sink of localism, den of ignorance”. Yet, it was the same people who had voted Indira Gandhi out of power in 1977. How does one explain this? Yes, there is ignorance and isolationism, yet people restored democracy, resisted demagoguery and halted the overtures to authoritarianism. It, indeed, is an intriguing facet of Indian society and democracy.

Romila Thapar, in her recent book, Voices of Dissent: An Essay, thinks protest marks the “collective subconscious” of the nation, much as Amartya Sen felt that we are an argumentative lot. Thapar traces dissent and disagreement to the Shramik tradition that goes back to ancient India, Buddhism and the Bhakti movement. In turn, Sen traced argumentation to the Vedic tradition, where it existed between the strands of Hinduism itself. So, a society that looks dormant, highly segregated and regulated by caste and gender norms also had its share of protest.

Change and continuity are diabolically interrelated in the “Indian way”. There are many ways to explain this, but one core of this imagination seems to be the irreducible tension between the political and the cultural. Indians harbour a healthy mutual suspicion between the two worlds and belong entirely to neither.

The current regime and the Supreme Leader draw their legitimacy from the religious, cultural and national symbolism they evoke. It is more a sense of loyalty towards the nation and faith in religious sensibilities that allows them the trust and the goodwill of “the people”. By definition, faith and trust are evaluative; they are by no means blind. The BJP-RSS combine commits a compulsive blunder when it sees faith and loyalty but fails to see the evaluative content of these cultural expressions. People routinely say, “Modi is like god”, but they always hasten to add that if he fails, they shall remove him; that “he is not above the nation and its people”.

The BJP and the RSS are trying to freeze history to its first moment of loyalty and faith. They seek to replace the evaluative aspects of the nation through intimidation, propaganda, weakening the Opposition, newer electoral strategies, fixing members of the Opposition, de-vitalising institutions, and more. The long rope Modi has got reflects the deep resources of trust and belonging in the country. An entrenched collective memory of nationalism tied to latent religious symbolism has proved potent, but it does not displace the ability of people to evaluate.

Mrs Gandhi was not only defeated but also re-elected once the Janata experiment turned out to be vacuous. Similarly, the BJP lost the Uttar Pradesh election after the demolition of the Babri mosque in 1992.

We remember the Emergency for having normalised exceptionalism, but we must also recall it for the exceptional ability of people to become a part of the normal collective thought process. India is a strangely segregated and yet open society. It requires a deeper analysis, but in brief, the Emergency also symbolises the potential of common sense to beat propaganda.

History is repeating itself. We have had seven years of unprecedented demobilisation and disempowerment. Just like in 1975, we have a weak Opposition without an alternative narrative, but people, on their own, are still trying to make sense of events. For instance, they are attempting to understand why the current regime failed to prevent deaths during the pandemic: ‘Is it possible this happened despite Modi or is it because of his hubris?’ Similarly, they are asking whether the Rama temple at Ayodhya and the abrogation of Article 370 reflect the true commitment of the regime to the majority religion or are mere rhetoric and diversionary tactics?

Even if many of the government’s recent moves are mere grandiloquence, people are asking if we are better off with these “successes” or can sustain without them?

The Emergency and its failure helped create a new imagination. Today’s modes of mobilisation also have the potential to allow for deeper reflection. Mrs Gandhi got re-elected despite people rejecting the Emergency. So, people are capable of “seeing through” difficult options, and there is no reason why they cannot do it once again.

(The writer is Associate Professor at the Centre for Political Studies in Jawaharlal Nehru University, Delhi. The views are personal.)