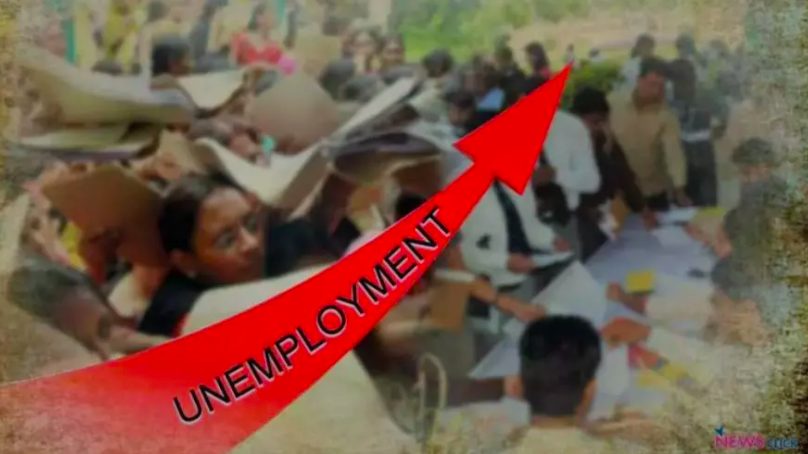 The number of employed persons in India plummeted from about 40 crore in January to 39 crore in April 2021. That’s a loss of one crore employed persons, one of the steepest falls ever in four months, barring the brutal devastation caused by last year’s complete countrywide lockdown in April-May 2020. This emerges from latest estimates of employment from the Centre for Monitoring Indian Economy (CMIE).

January was actually a high in terms of employment, mainly because of demand in agriculture. As harvesting of wheat and other rabi crop got completed, jobs in agriculture disappeared, leading to a steep fall in employed people. [See chart below]

The rest of the economy obviously is unable to absorb anybody. The job situation has not shown any significant recovery since the lockdown last year. In fact, the past two years have seen corroding unemployment that has damaged family budgets, pushed down living standards and – as a dire side-effect – pushed down wage levels. This grim picture of losses in existing jobs goes hand in hand with increasing unemployment rate, as shown in the next chart below. Jobless numbers have zoomed up since April and touched a staggering 9% recently, as per quick estimates put out by CMIE. Remember, that all those who lost jobs are not necessarily reflected in unemployed numbers – some simply stop looking for work for a few months, and are thus counted out of the labour force.

On the other side, the rise in unemployment rate does reflect the effect of the pandemic, subsequent devastation in terms of death and infection, and then the state-wise or regional lockdowns announced by the governments. At present, at least 26 states have lockdown-like restrictions of varying types. This has a direct impact on livelihoods, since the vast number of people is working in informal occupations, which get prohibited in such conditions.

The CMIE estimates suggest that the number of jobless persons actively looking for work was approaching 3.4 crore in April this year. Besides these, there are those discouraged jobless people who want to work but are not actively looking for it, knowing that jobs are difficult to find. Their numbers are estimated at 1.9 crore. So, the total number of jobless people willing to work adds up to a mind-numbing 5.3 crore in April 2021.

The number of people working in the rural job guarantee scheme stood at 2.1 crore in April 2021. Usually, there is a big jump in job seekers after April, as the summer kicks in and all agricultural work dries up. So, these numbers – already at very high level – are likely to increase in May and June.

What is happening with the rest of the economy, besides agriculture? Why is it not able to absorb people? Actually, despite all the back slapping and applause, the Indian economy has never recovered from last year’s lockdown. And, that is so because it had already gone into a slowdown in 2019 for reasons that had nothing to do with the pandemic.

In 2021, the second wave of COVID and the sub-national restrictions on activity, have given another jolt to the fumbling economy. While most professional rating agencies have downgraded their forecast about India’s economic growth in the current year, there seems to be a view among government economists that the economy will not take that big a hit as last year. This is based on the fact that most manufacturing activity in India is still permitted, and agricultural activity, too. Rabi harvest has been good, and as the pandemic spreads, harvesting has mostly been completed.

This is a pipe dream that is being peddled mostly by government and its institutions. Some features that define this second wave are: it is more deadly; it is affecting younger people more than before; and, it has spread to rural areas. These three factors alone are likely to cause a major hit to the economy. Here is how.

The severity of disease and its increased infectiousness has meant increased pressure on hospitals, which have been overwhelmed. The net result of this – and the shortage of oxygen, drugs, beds – has been far higher spending on treatment by families. This will have a very damaging effect on family budgets, which in turn means curtailed spending potential.

The younger population getting more affected means that more people in productive jobs will be sick, and given the jungle raj that prevails in terms of job security, this implies loss of earnings and likely loss of jobs too. This, in turn, again means less spending by families, as they sink under joblessness.

Increased infection in rural areas means a very large population is affected, and the virus is likely to go through its ebb and flow for a longer time.

All this put together means that people’s buying power – their ability to spend – will get restricted, and whatever they have, will be focused on getting basic needs. Demand for goods, already low, will crash further. And, if there is no demand then industrial activity will also decline, as will various demand for services, including trade, restaurants etc., construction, tourism and so on. Just keeping manufacturing activity in the organised sector open is not going to help much. This decline, in turn, will cause more joblessness, and so the cycle will go into a tailspin. Just like it has been happening.

The only way out of this blind alley into which India is being led by the Modi government is to completely abandon last year’s path of fiscal tight-fistedness and start spending money on the people. This applies to everything:

Besides this, government should provide financial aid to state governments who are actually fighting the COVID battle. If need be, the government should raise resources by taxing the rich sections of Indian society, or raise loans. But unless these measures are taken boldly, India faces a grim and devastating future.