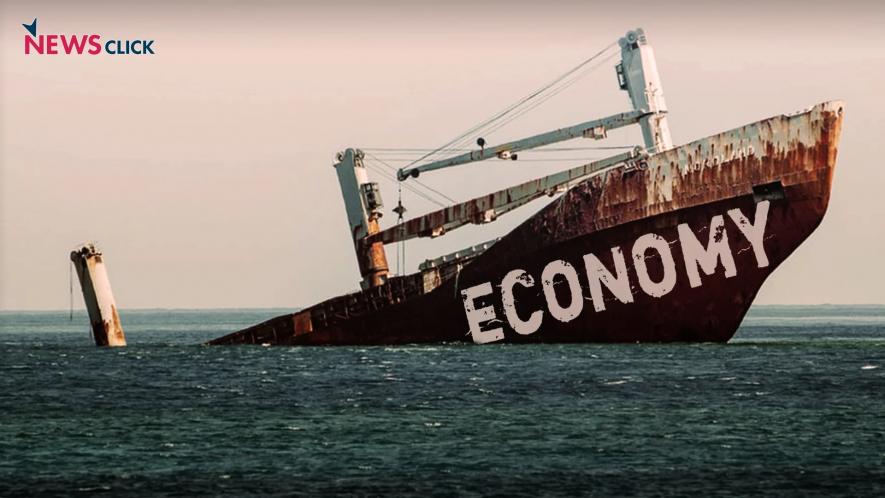 Economic Survey 2021-22: Glossing Over Travails of a Pandemic-hit Economy

THE Economic Survey for 2021-22, presented in Parliament on Monday, attempts to give a positive spin to the grave travails afflicting the economy. While preserving the sarkari contention that the Indian “growth story” remains intact and rapidly on the mend, it projects GDP growth of 8.5% in the next financial year, 2022-23; current official projections are that the economy would grow at 9.2% this year. The key highlight of the latest Economic Survey is not just in the way it seeks to highlights its priorities, but also in evading the issues that matter to most Indians.
This rosy scenario-building sidesteps the key challenges facing the economy in which livelihoods have been devastated in the pandemic. It has become evident that the economy has, during the pandemic, acquired an even more divisive tendency, characterised by the worsening of livelihoods of those fashionably referred to as belonging to “the bottom of the pyramid”. This is even as corporate profits have soared to unprecedented levels in recent times.
This, coupled with stubbornly high inflation rates, has worsened living conditions for those who have lost jobs, suffered significant income losses and have suffered the effects of the pandemic without any significant support from the State. All these find no mention in the Survey. That is, for the poor and those working not just in informal activities but even in what goes in the name of the organised sector, there has been no sign of growth of incomes, even as prices of essentials have increased sharply. Economists call this stagflation. But the Survey simply evades this.

Although it is evident for almost two years now that the source of the growth problems emanate from troubles on the demand side, the Survey bravely asserts that it sees no significant role for “demand management”. Instead, in line with the Narendra Modi government’s predilections, it continues with an aggressive pursuit of supply side measures. It, thus, promises a further easing of regulations, what it terms as “process reforms”. These are essentially the same as those that went by the name of facilitating the ‘Ease of Doing Business’.
Further privatisation and aggressive pursuit of the asset monetisation pipeline, which allows private investors to take charge of public assets belonging either to government departments or public sector units, are being pushed in the fond hope that the “animal spirits” of private enterprise would kick in, thereby driving growth.
Even by its own admission, the Survey notes that private final consumption expenditure still remains below the levels of 2019-20, that is, before the pandemic. It is mainly government expenditure that has driven whatever growth has been achieved. Even this, by no means, is an indicator that this has led to expenditures that result in income support to those hit by the pandemic. The fact that two years into the pandemic there has been no significant attempt at an income transfer scheme underlines the severity of demand compression.
Meanwhile, capital formation has suffered adversely. The private sector has shown extreme unwillingness to invest in fresh capacity, especially at a time when existing capacity still remains unutilised because of the demand slump. The dogged refusal to use fiscal instruments to counter the effects of the pandemic and instead persisting with the use of monetary policy instruments, mainly interest rates or liquidity management through the central bank, have hardly helped. This has only helped large corporations who have used these measures to lower their debts, while refusing to make fresh investments.

The attractiveness of lower interest rates for vast sections of the productive sector is minimal for those whose very existence is under threat. The marginal savings they could make because of lower interest rates is more than offset by their immediate concern about their very viability, especially in the pandemic. Undeterred by any of these real-world concerns of the many, the Survey insists that bank credit has become far less important. “Risk capital has so far been far more important than banks in providing finance,” it notes.
For the record, the Survey reveals that 75 companies raised Rs. 89,000 crore through public offers between April and November 2021. Indeed, it even mentions that the IPO (initial public offer) boom in the current year has been mainly by “new age companies/tech start-ups/unicorns”, conceding that this means of financing is by no means available to all economic agents.
The Survey makes the incredible assertion that companies’ access to the capital markets has reduced their need for bank credit. This assertion is not just naive, instead, it reflects an extremely elitist bias that runs through most of this year’s Survey.
First, only a thin sliver of even what passes off as the corporate sector is able to access the capital markets. Large sections of smaller units, even in the organised sector, have no access to the capital markets. Second, there’re costs associated with raising funds through the capital markets; thus, even though equity may be considerably cheaper than debt generally, companies need to the scale to justify the costs associated with going to the capital markets.
Third, the frenzy in the capital markets, which has, ironically coincided with the pandemic and the widespread misery associated with it, is by no means a long term option for smaller companies, which require funds to meet short- term working capital needs. The brazen assertion that this is the route to salvation for Indian companies reveals not just an obsessive focus on the interests of the elite, but a callous disregard for the way lives are lived by most Indians.

Devaluation of the Economic Survey

The value of the Economic Surveys has steadily diminished ever since the Modi government summarily dismantled the Planning Commission after it came to power in 2014. Initially, it maintained the veneer of solemnity, but later, especially after the last Chief Economic Adviser, who was not particularly well known in the community of economists, assumed office, the document has been considerably devalued. This was particularly because the document was seen as one whose primary task was to justify the actions of the Government or the party in power — their justification of the demonetisation of the national currency in 2016 or the chaos that resulted from the implementation of the Goods and Service Tax (GST).
The Modi regime’s blatant disregard for the integrity of India’s statistical systems has also played a role in determining the direction of the Survey.  Recall the last Survey’s triumphant predictions of a V-shaped economic recovery or the previous year’s use of “thalinomics”, which displayed blatant ignorance of the basics of the construction of indices, or the shocking use of Wikipedia as a data source in one of its tables.
Recent Surveys, shaped as they have been by those who come from the world of high finance rather than economics, have also reflected a penchant for management jargon to make assertions that are far-removed from the Indian reality. For instance, this year’s Survey starts with the unsubstantiated assertion that the Indian planning process’ use of what it terms the “waterfall” approach belongs to a long gone era. It characterises the approach as being “detailed” but rigid, not nimble enough to deal with the uncertainties of the world. Instead, it adopts an “Agile” approach, borrowed from the world of software development and project management.
The Survey, using jargon from the management world, asserts that this framework is superior because it is based on “feed-back loops, real-time monitoring of actual outcomes, flexible responses, safety-net buffers” and other such factors. It glibly asserts that this flexible approach enables an analysis of “policy options” instead of being “deterministic”, as was the case with old fashioned planning. The Survey makes the fashionable assertion that in a world of vast real-time data, this is possible.
From here it is just a small step for the Survey to invest heavily in the world of data that is always available on call. It counts GST collections, digital payments, satellite photographs, electricity production, cargo movements, internal/external trade, infrastructure roll-out, delivery of various schemes, mobility indicators and several others as the basis for decision making. All this may seem to be exactly the right thing to do for a digitally clued in audience, but the overbearing reliance on such data for tailoring policies would surely pave the way for accentuating the dualities that characterise the Indian economy. Just as the digital divide locks away large sections of people away from any kind of meaningful and democratic participation, the heavy reliance on such data to tailor policies, poses the real danger of policies being crafted in ways that would ignore the concerns of those who are not big enough to matter.
It is not as if high-frequency numbers do not have relevance or use. But these need to be used with caution because these provide a fragment of the whole picture. For instance, the use of such data to compute initial estimates of economic output or national income suffers from the serious problem of ignoring large sections of participants in economic activity. The fact that Indian GDP estimates rely heavily on indirect methods to estimate economic output in the unorganised or informal sectors, has the effect of underestimating the impact of calamitous events, such as demonetisation or the pandemic, on livelihoods and incomes. High frequency indicators, by failing to capture this reality, have the effect of banishing vast sections of people from what ought to be the legitimate task of policy making. The heavy reliance on such numbers reflects not just a deliberate bias but an egregious disregard for equity.
In fact, at the press conference that followed the presentation of the Survey, Sanjeev Sanyal, Principal Economic Adviser to the Finance Ministry, displayed a series of satellite-based images (this year’s Survey has a whole chapter devoted to the use of satellite images) showing the spatial development of urban centres in India and the changes in night illumination in India over time. Nobody doubts the wonderful ways in which such images can be used effectively, but are these images better used by urban authorities or by the manager of the national electricity grid? Why do these have to figure in the Economic Survey?
Indeed, a journalist asked Sanyal whether it was possible to identify clusters of unemployed in in the wake of the pandemic or of clusters showing COVID casualties in India. Sanyal was stumped. The Survey was obviously not designed to answer such mundane questions.
The writer is former associate editor, ‘Frontline’, and has worked for The Hindu Group for over three decades. The views are personal.
First published by Newsclick.