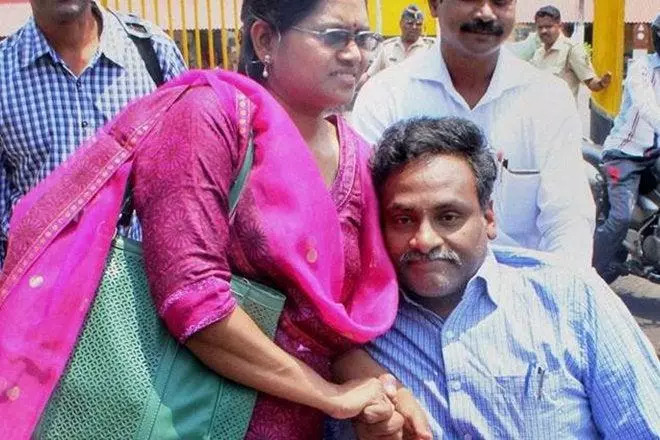 G.N. Saibaba, who is serving a life sentence in Nagpur prison for alleged Maoist links, has been terminated from his position of assistant professor at Ram Lal Anand College of Delhi University without citation of any reason.

“The services of Dr. G.N. Saibaba, Assistant Professor, Ram Lal Anand College are terminated with effect from the afternoon of 31st day of March, 2021,” reads a “memorandum” dated March 31. Containing the college’s letterhead, the document, accessed by Newsclick, was signed by the college’s principal.

The 53-year–old professor, had taught English at DU’s Ram Lal Anand College until his arrest in 2014. Since his conviction in March 2017, Saibaba has remained incarcerated in the Nagpur Central Jail’s high security zone.

Earlier this year in February, it was also reported that Saibaba was tested positive for coronavirus.

Saibaba’s wife, A.S. Vasantha Kumari, confirmed to Newsclick on Friday about receiving the said termination notice on April 1 through post. “The notice basically contains only one sentence regarding the termination. There is no explanation whatsoever given to us by the college authority,” she said.

The news of Saibaba’s termination was also confirmed by Nandita Narain, a DU professor associated with the Committee for the Defence and Release of Dr G.N. Saibaba. “We got to know about Saibaba’s termination only yesterday. We are trying to find out about the procedure that was followed by the college authority,” Narain said.

Saibaba, along with four others, was sentenced by the District and Sessions Court in Maharashtra’s Gadchiroli on March 7, 2017, to life in prison under the Unlawful Activities Prevention Act. The academic was arrested on May 9, 2014 after the Gadchiroli police claimed that he had links with Maoists and was “likely to indulge in anti-national activities.”

Subsequently, an appeal against the life sentence verdict was filed to the Nagpur Bench of the Bombay High Court. “Since, the matter is sub-judice, any precipitative action like termination should not have been taken by the college authority,” rued Narain.

According to Narain, the college authorities have issued multiple “show cause notices” pertaining to a departmental proceeding to Saibaba in the past few years, replies to which were given. “Only last year, due to the pandemic which caused suspension of prison meetings for inmates in the Nagpur’s Central Jail (where Saibaba is lodged), an explanation for why Saibaba couldn’t respond was given to the college,” she said.

Referring to the same, Kumari claimed that the exchange of letters between the college authority and her, on behalf of Saibaba, was the “last one”, after which a termination notice was served on March 31.

Kumari rued that the development will only mean more hardships for the family in the days to come.

Being a homemaker, who is living with her daughter in New Delhi, Kumari was till now depended on Saibaba’s monthly salary to meet the ends. “It was halved after he (Saibaba) was suspended back in 2014,” said Kumari.

According to the termination notice served recently, three months’ salary has been paid to Saibaba by the college authority. However, the amount means not much to aggrieved Kumari.

“I do not know right now how the expenses will be met. Maybe I will look up for a job. But I am not sure if I’ll get one,” she said, adding that after the lockdown, “even the experienced ones are finding it difficult to secure work.”