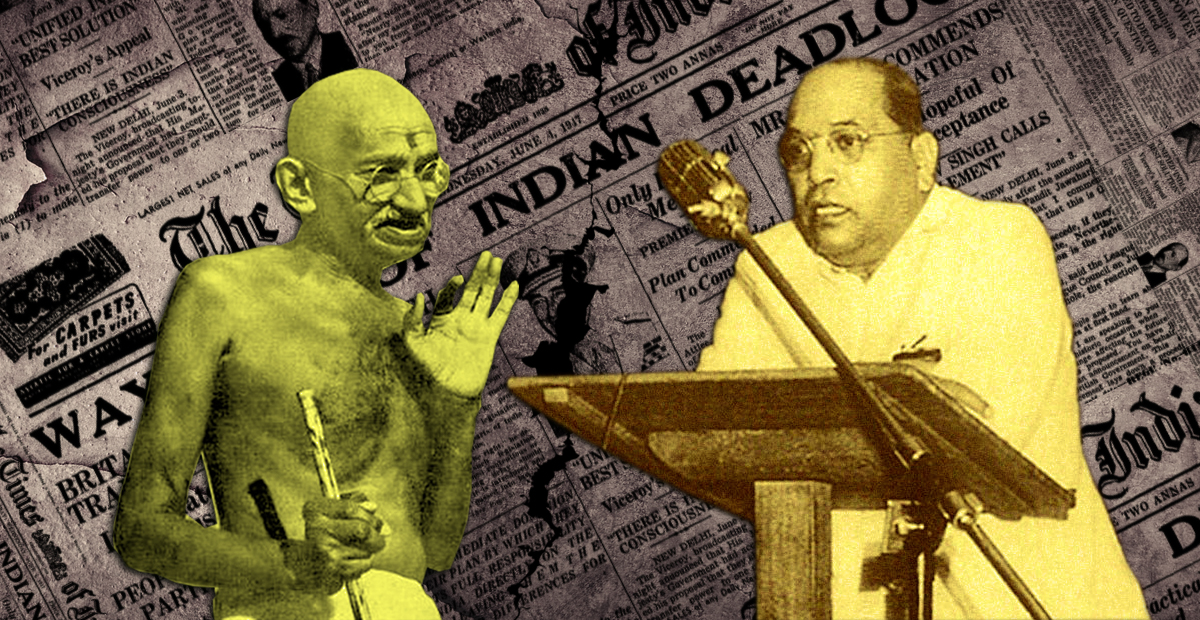 Do sanitation workers identify themselves with Ambedkar and Gandhi?

Gandhi and Ambedkar held very distinctive approaches to the eradication of untouchability. Gandhi saw it as work for the soul while Ambedkar saw it as entrapment by the caste system. Even in 21st century India, the caste system strongly prevails with sanitation workers dying every day in septic tanks. PRAGYA AKHILESH analyses the impact of the different approaches of Gandhi and Ambedkar in modern India.

WE all know that Gandhi wished to eradicate untouchability. In this effort, he described himself as a ‘Bhangi’ (a member of the lowest untouchable caste assigned the task of sweeping) and cleaned the toilets of the ashrams himself. He even compared the work of a ‘Bhangi’ for society and a mother’s work for her child. He tried to propagate the term Harijan (Children of God) for the untouchables.

But at that time he did not know that manual scavenging would exist decades later, even in 2021.

Ambedkar and Gandhi had different approaches to caste and untouchability. The watershed moment came about in 1932 when Ambedkar demanded a separate electorate for the Depressed Classes after the Round Table Conference.

Both the stalwarts clashed over the question: who is the real representative of the untouchables?

The Congress was dominated by Brahmanised policies. They struggled to understand the importance of representation, which was quite visible in their decisions and their inability to provide any constitutional safeguard for the marginalised.

A year later, when the communal award granted separate electorates to Muslims, Sikhs, and depressed classes, Gandhi responded by announcing that he would fast unto death. He was concerned that a separate electorate would disrupt Hinduism. He was afraid that this would divide Hindu society. But he didn’t realise that Hindu society was already divided. India’s Brahmins had long lived with this caste-based division among Hindus. They left the job of cleaning their excreta and dead animals for the Bhangis, Halalkhors and the Valmikis (untouchable castes).

Also Read: Book Review: Rathore’s “Ambedkar’s Preamble” reminds us to reawaken our passion for the Preamble

The Mahatma did not understand the weightiness of the need for the ‘depressed classes’ to represent themselves. He was unable to question the rigidity of caste system based occupation.

The Congress was dominated by Brahmanised policies. They struggled to understand the importance of representation, which was quite visible in their decisions and their inability to provide any constitutional safeguard for the marginalised.

Gandhi’s fast caused unimaginable pressure on Ambedkar and the depressed classes. Ambedkar tried to resist but had to eventually succumb and visited Gandhi in Yerwada Jail, where he was fasting. When they met, Gandhi spoke about being ‘an untouchable by adoption’.

Gandhi viewed scavenging as a noble profession without the consideration that it was thrust upon the scavengers by force. Their only choice lay between scavenging and starving. This raises questions about his grasp of the caste system.

It is unquestionable that Gandhi wanted to end untouchability but the essence of it contained exclusion, more than inclusion. Gandhi’s Harijan terminology was a result of this very stereotype. This made it quite evident that he had much to learn about the history of Dalit atrocities that result from the caste system.

Gandhi’s lack of knowledge of occupation based on caste and ‘adoption of untouchability’ is still confusing to the sanitation workers.

Gandhi was unable to withdraw from the conception of varnashrama dharma that viewed Hindu society in a division of four varnas, with people in each varna pursuing a different path to god. This is the root of the caste system, which grew into a stringent, rigid and hierarchical system of caste oppression.

Gandhi was not prepared for the destruction of the entire caste system.

Gandhi viewed scavenging as a noble profession without the consideration that it was thrust upon the scavengers by force. Their only choice lay between scavenging and starving. This raises questions about his grasp of the caste system.

Another result of Gandhi’s fast was that many orthodox Hindus claimed that they ‘did not see caste’. They ignored their privilege and erased the atrocities on the marginalised.

After the Poona Pact, Gandhi asserted that the depressed classes should not be prevented from entering the temples. But he missed questioning the privilege of the ones who were against the entry of untouchables into temples. Gandhi should have shamed them but he was far better a person than that. His stature as the Mahatma meant that he could not say that ‘they are not the rightful representative to them all.’

Sanitation workers see Ambedkar as a doctor who not only diagnosed problems but also went ahead to enable constitutional safeguards for them.

Who liberated the sanitation workers?

India’s Dalits have always loathed the word ‘Harijan.’ Ask a Dalit woman forced into manual scavenging whether Gandhi’s vision helped her and she would say that both the perception of duty and ‘helplessness’ suffocates her.

The manual scavengers of India fear the word ‘Harijan’ being thrown at them for it is accompanied with the claim that manual scavenging has been already eradicated from this land.

Sanitation workers see Ambedkar as a doctor who not only diagnosed problems but also went ahead to enable constitutional safeguards for them.

Some seek to find balance by hanging photographs of both Ambedkar and Gandhi together in their home.

Rani, a sanitation worker from Patna, says that the road to Ambedkar for her was through Gandhi. But she was disappointed to see Gandhi glorifying the work that she had found herself trapped in. The only difference has been that Gandhi trapped her in this identity while Ambedkar liberated her.

Today, the sanitation workers of India wonder whether their brothers dying in septic tanks could have been saved if the depressed class had been led by someone who understood the ground realities of caste? Dalit representatives would have probably found a solution to India’s manual scavenging problem.

She added that Ambedkar’s work was a continuation of what Gandhi started in India’s freedom struggle. By critiquing Gandhi, Ambedkar became a true visionary and a representative of them all.

Our fight has actually been against the Brahmins who have oppressed us from the beginning, said Rani. Proposing that Brahmins are now also doing the work of scavenging is a mockery of all of us. This is not a chosen position. They coded us as ‘Bhangi’ and tied pots around our waist. They made us carry animal carcasses and human excreta while they chased their own pursuit of ‘purity.’

Also Read: Idea of Republic is Just an Abstract One

Today, the sanitation workers of India wonder whether their brothers dying in septic tanks could have been saved if the depressed class had been led by someone who understood the ground realities of caste? Dalit representatives would have probably found a solution to India’s manual scavenging problem.

Dinesh a sanitation worker from Ambala says that if only Gandhi wouldn’t have claimed to be ‘untouchable by adoption’ and helped from a distance by supporting Ambedkar’s vision for us, probably manual scavenging would not exist today.

It is the patronisation that kills us all. I don’t think that Gandhi knew that not everyone else would be a Mahatma after him. He could not understand that untouchability was a result of the caste system. He did not realise that to begin abolishing untouchability, every Brahmin should renounce their privilege.

It is also true that Gandhi felt pressured both by Congress and Ambedkarites. On one side he was not seen as the rightful representative of the depressed classes and on the other, he was losing the support of upper-caste men who were in the front seat against the ‘British Raj’.

Yet, some feel conflicted over Ambedkar. Amit, a sanitation worker from Jhabua who is also an Adivasi, says that he will always question Gandhi’s stance on scavenging. But recently he came to know that Ambedkar thought of Adivasis as a ‘potential danger’ and used words like ‘civilising the savages’. “In this way, I am torn between my duty towards Ambedkar and my identity based on my birth as Ambedkar performed similar sin as Gandhi while talking about us, the Scheduled Tribes,” Amit said.

He says that it is also true that it does not matter who we regard more, Ambedkar or Gandhi? As much as it is disappointing to the sanitation workers, it doesn’t matter anymore if the call for eradication is presented as a symbol of Gandhism. What matters is that the number of sewer deaths has kept growing five times in the last ten years. I do feel that at least, Ambedkar showed us the right path, Gandhi meanwhile left us confused.