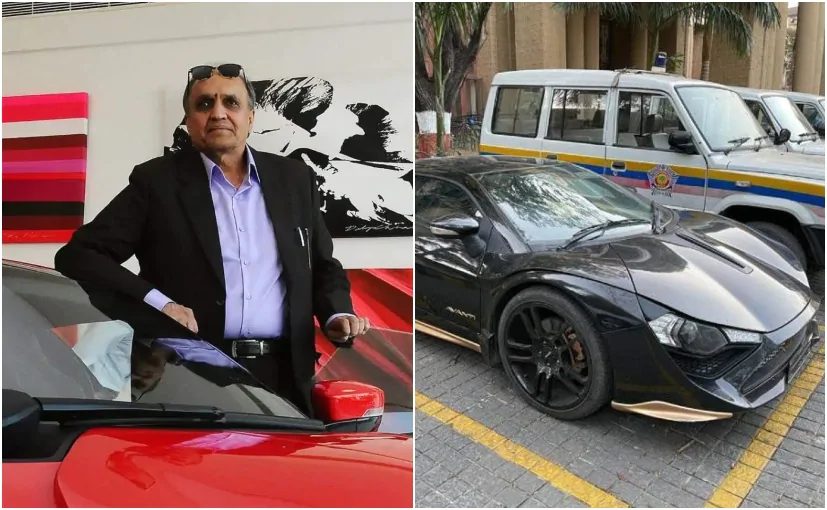 Dilip Chhabria made crores designing cars, then why did he design creative ways to defraud banks?

Dilip Chhabria, who became rich and famous designing and remodelling cars, has been arrested on cheating and forgery charges. Why do the rich and famous resort to bank fraud, when they have made money using legal means? RAMESH MENON reports on how numerous Indian businessmen have been involved in bank frauds that have led to the huge financial crisis in the banking sector.

Sixty-seven-year-old car designer Dilip Chhabria, who sits on an empire of over Rs. 800 crore, could have reigned as a celebrity car designer forever. Each of his redesigned cars, popularly known as DC Avanti, fetched around Rs. 42 lakh. Over the last few years, he had made 463 such modified cars. Most of them were bought by celebrities who wanted to make heads turn when they drove around.

Why, then, did he resort to cheating and forgery to make more money?

Was it his sheer greed for more money?

According to the Ministry of External Affairs, 31 individuals accused of fraud and economic offences are living abroad. They owe Indian banks and institutions around Rs. 40,000 crore.

Maybe that was one reason.

The other reason is probably that most scamsters who have cheated Indian banks by fraudulently securing loans have not been punished.

According to the Ministry of External Affairs, 31 individuals accused of fraud and economic offences are living abroad. They owe Indian banks and institutions around Rs. 40,000 crore.

Chhabria was recently arrested by Mumbai Police on allegations of cheating and forgery, including registering cars at numerous RTOs in various states and securing loans against them from Non-Banking Financial Companies.

The police found that 90 of Chhabria’s cars, which go under the brand name of DC, a prized trademark, were used to secure fraudulent financing. Each of them had multiple loans of Rs. 42 lakh each.

Obviously, he had no intention of paying back those loans.

In one case, the police found that a car engine had been registered by 16 cars. Loans were secured against all 16 cars!

The 90 vehicles under the police scanner were registered in two or three RTOs in different states.

It was clearly a well-oiled operation. Chhabria would never have been caught had it not been for a customer in Tamil Nadu, who had bought one of his two-seater cars for Rs. 42 lakh. When the police tried to fine him for breaking a traffic rule, they discovered that another car with the same registration number existed in Haryana. When the customer was quizzed by the police, he tried contacting Chhabria, but found him very evasive. Worried, he travelled to Mumbai to confront him, but as he could not meet him, he filed a complaint with Mumbai Police.

It is greed and the confidence that the law will never catch up with them that motivated many of the richest Indians to engineer “creative” methods of money laundering, fraud and financial irregularities. Think of Mehul Choksi, Jatin Mehta, Vijay Mallya, Nirav Modi, Neeshal Deepak Modi, Nitin Sandesara and so many others who owe banks huge sums of money—so huge that they will probably never be repaid.

When the police got to work, they found that one NBFC had okayed a loan to Chhabria even before the car had been registered. So, the police are widening their net to examine the involvement of finance companies, who were obviously going against the rule-book.

Meanwhile, the police are also investigating customs evasion, as many parts were secured from abroad. Some cars were sold to foreigners. Surprisingly, these were sold for below the Rs. 42 lakh price tag. Was this done to evade customs duties? That is what the police suspect.

The Crime Branch have proposed a forensic audit of Chhabria’s firm’s financial records.

The intelligence unit of the Crime Branch of Mumbai Police has seized 14 DC Avanti cars and 40 engines from Chhabria’s factory in Pune. They also found 19 other high-end cars and bikes.

Dilip Chhabria Designs Pvt. Ltd was set up as a firm for Dilip was very passionate about cars. He has been widely written about in the media and was a name to reckon with in the field of modified cars. Bollywood actors and Indian cricketers flocked to him to have their cars modified. He could have continued to live in glory.

It is greed that blew the death knell for his creative enterprise.

It is greed and the confidence that the law will never catch up with them that motivated many of the richest Indians to engineer “creative” methods of money laundering, fraud and financial irregularities. Think of Mehul Choksi, Jatin Mehta, Vijay Mallya, Nirav Modi, Neeshal Deepak Modi, Nitin Sandesara and so many others who owe banks huge sums of money—so huge that they will probably never be repaid.

We have seen so many such cases over the last few years. Probably, without cheating, many of these magnates could not have built business empires at lightning-speed. They raked in huge wealth that would have taken care of their own needs and of their future generations. They would never have been able to spend even a fraction of the wealth they had amassed in their own lifetime. But they still gave in to greed.

Actually, there is no end to greed.

This is a truth we cannot escape as we examine the list of 2,426 wilful defaulters who owe Indian banks over Rs. 1.47 lakh crore. Almost all of these defaulters never ever had any intention of paying back.

Nirav Modi became the toast of the rich and famous after he emerged as an icon in the Indian diamond trade. Since early 2019, following India’s extraction request, he has been cooling his heels inside the Wandsworth Prison in London.

Vijay Mallya owes Rs. 9,000 crore. He is spending a fortune trying not to get himself extradited to India. One of the pleas he has taken is that conditions in Indian jails are pathetic!

The Punjab National Bank has recovered Rs. 24.33 crore from the liquidation of Nirav Modi’s assets in the United States. This was possible due to the efforts of the Ministry of Corporate Affairs, which was requested by the bank to join the bankruptcy proceedings in New York to help it with its claims. In 2018, three companies promoted by Modi had filed for bankruptcy protection in New York. The Punjab National Bank hopes to get further claims settled in this manner as well.

In the first week of January, the special judge for cases under the Prevention of Money Laundering Act, VC Bardem, accepted the plea of Nirav Modi’s sister and brother-in-law, Purvi Modi and Mayank Mehta, to turn approvers, or prosecution witnesses, in the Punjab National Bank scam case. Purvi, an accused in this case, is a Belgian national.

An RTI activist has found that the RBI wrote off outstanding loans of wilful defaulters amounting to Rs. 68,607 crore till September 2019.

On 6 January, the Bombay High Court heard Rohin Modi, the son of Nirav Modi, who has challenged the confiscation of Nirav’s triplex penthouse by the Enforcement Directorate in Mumbai, which he had bought for Rs. 24 crore in 2006. Rohin argued that it was bought before the alleged offences were committed in 2011. He said he was not given notice of the confiscation, and since he is now an adult, he is a beneficiary of the trust that owns the house.

Nirav Modi became the toast of the rich and famous after he emerged as an icon in the Indian diamond trade. Since early 2019, following India’s extraction request, he has been cooling his heels inside the Wandsworth Prison in London.

Had he not succumbed to greed to amass huge wealth; he would have been a case study for successful businessmen in global business schools.

Fleeing abroad has been a common ploy employed by most scamsters.

Mehul Choksi, who now lives on the Antigua and Barbuda islands of the Caribbean, owes Punjab National Bank Rs. 4,644 crore. The RBI has named him, along with the Jhunjhunwala brothers and Vijay Mallya, among the top 50 wilful defaulters who have scammed India’s banks.

In 2020, there were around 190 cases of bank frauds registered by the Central Bureau of Investigation, in which the misappropriation of funds was close to Rs. 60,000 crore.

Choksi is wanted by judicial authorities in India, where he is to be tried for a host of crimes: corruption, cheating, dishonesty, criminal conspiracy, criminal breach of trust, and money-laundering. Non-bailable warrants have been issued against him. Two months ago, the Prime Minister of Antigua and Barbuda said that he would be returned to India only when he exhausts his appeals in the Caribbean island-state.

Ultimately, most of this is going to be written off.

Even the scamsters know that.

They know many never get caught or jailed for similar acts. That is why there is a widespread perception in India that impunity lets such frauds continue.

An RTI activist has found that the RBI wrote off outstanding loans of wilful defaulters amounting to Rs. 68,607 crore till September 2019.

In 2020, there were around 190 cases of bank frauds registered by the Central Bureau of Investigation, in which the misappropriation of funds was close to Rs. 60,000 crore.

The annual report of the RBI for 2019-2020 shows that bank frauds of more than Rs. 1.85 lakh crore were reported in the first half of 2020, which is more than double what it was in the previous year.

This happened despite a clear direction by the RBI to banks to be alert to detect early warning signs by lenders.

Amazingly, in frauds of over Rs. 100 crore, the average time taken before detection was 63 months!

That is more than five years!

Unless India shows the political will to crack down on offenders and not just indulge in the optics of trying to get them back to India, scams will continue.

It is only when scamsters are punished, and there is the fear of being jailed, will greed take the back seat.

(Ramesh Menon is the author of six books, a documentary filmmaker, educator and editor of The Leaflet.  The views are personal.)