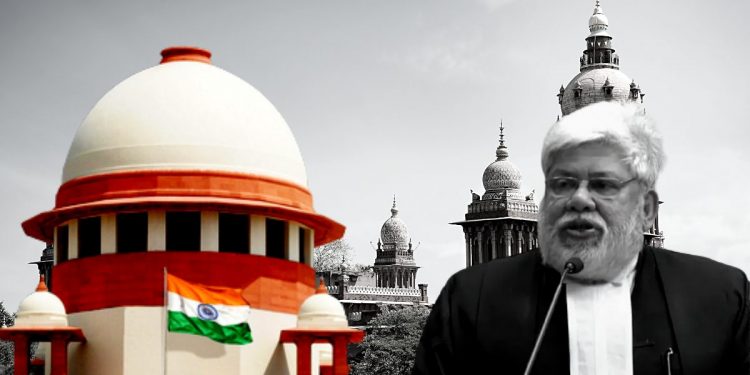 Did the SC Collegium violate the Memorandum of Procedure in transferring Chief Justice Sanjib Banerjee?

With advocates in Madras High Court continuing to apply pressure on the Supreme Court’s Collegium to review its recommendation to transfer Chief Justice Sanjib Banerjee to Meghalaya High Court, grave doubts have arisen over whether the Collegium complied with the requirements of the Memorandum of Procedure (MoP) for transfer, writes V.VENKATESAN.

ON Sunday, protests against the transfer of Chief Justice Sanjib Banerjee from Madras to the Meghalaya High Court, continued to pour in from the Madras High Court. Thirty-one senior advocates, including P.S. Raman, Nalini Chidambaram, Arvind P. Datar, and Vijay Narayan, made public their representation sent to the Collegium members on November 10, expressing their concern and anguish.

In their letter, the senior advocates articulated the view that Chief Justice Banerjee has discharged his functions both in the administrative and the judicial side to the best of his capabilities, bringing honour to the office he held. “He has been a good administrator and in the judicial side has disposed of a few thousand cases even during the devastating covid pandemic. The orders predominantly were dictated in the open court and delivered. When this is a fact that most advocates and litigants would readily agree, we are unable to fathom the reasons for his sudden transfer to another court”, the signatories said.

While agreeing that transfer is inevitable to protect and further “public interest” and “for better administration of justice”, they said they are collectively unable to identify any easily discernible reason that could lend credence to the justification that his transfer has been necessitated in public interest or for better administration of justice. “Justice Sanjib Banerjee, who has experience serving in large high courts has demonstrated capacity and talent to handle large numbers of cases which requirement would not arise in a court like the Meghalaya High Court, which though is an equally important institution, is a smaller one”, they added.

The advocates expressed their concern that these constant transfers and postings have left the Madras High Court in a state of constant flux. “Such short-lived tenures at the apex of the Court’s hierarchy in a state bodes ill for the health of the institution and the justice delivery system. The institution’s administration then is driven by impermanence which, in the long run, is likely to eat into the vitals of the institution”, they said. This is so for any institution, more so the High Court, given the significant role it plays in preserving constitutional safeguards, they added.

The signatories made a strong case for a two-year term for the Chief Justice of the larger High Courts like the Madras High Court, in order to enable them to make worthwhile contributions to the improvement and development of the institution. This is because it takes at least a year for a Chief Justice, after assuming charge as the head of the state judiciary, to understand the administration, composition and challenges of the institution, apart from the understanding of the local practices, culture, and language, among other things, they claimed. They pointed out that in the last three years, they had three Chief Justices with intervening Acting Chief Justices at the helm of affairs.

The senior advocates reminded the Supreme Court’s Collegium that the Chief Justice, along with the collegium of the High Court, plays a very important role in the selection of judges. In the very nature of the task assigned, the Chief Justice would require time to identify, observe, appreciate, evaluate and then recommend appropriate candidates to the high office of a High Court judge. “To give him such an onerous task which is but one amongst his multiple functions and then to curtail the period within which he is to perform it to an insignificantly short term would be doing injustice to the very spirit of the judgment in the Judges case”, they lamented.

Also read: Transfer of Madras HC CJ to Meghalaya HC: Is there more to it than meets the eye?

In a resolution passed in the Extraordinary General Body Meeting of the Madras Bar Association held on Sunday, serious concerns that the Supreme Court’s Collegium might have violated the letter and spirit of the Memorandum of procedure of appointment of High Court Judges (MoP) were expressed.

Although the resolution does not elaborate the concerns, the advocates who were party to the resolution, explained why they felt so.

The transfers of Justice T.S. Sivagnanam, who was then the second senior-most judge in the Madras High Court’s hierarchy, to the Calcutta High Court, and of Chief Justice Banerjee to Meghalaya are perceived to be in violation of MoP for transfer. “Such transfers are perceived to be punitive and does not auger well for the independence of the judiciary”, the resolution read.

The meeting requested the collegium to reconsider both the transfers, and remit the recommendation in respect of the transfer of the Chief Justice Banerjee for fresh consideration following the procedure contemplated under the MoP for transfer.

The advocates also drew attention to Paragraph 25.3 of the MoP, which says that the personal factors relating to the concerned Judge, including the Chief Justice, and his response to the proposal, including his preference of places, should invariably be taken into account by the Chief Justice of India and the first four puisne judges of the Supreme Court before arriving at conclusion on the proposal.

Knowledgeable sources insist that Justice Banerjee was only informed of the Collegium’s decision, and that he was not asked about his response to the transfer proposal, including his preference of places where he could be transferred.

Explaining the rationale of this provision in the MoP, the sources say that its purpose is to provide the shield of functional autonomy to the High Court judges, and to ensure the dignity of the judges, whose transfer is being considered by the Collegium.

When pointed out that under the Second and Third Judges’ case judgments, the transferee Judge alone can challenge the recommendation of the Collegium on the ground of violation of the MoP, the sources asked The Leaflet: “The affected Judge will not face the indignity of challenging the transfer, and instead succumb to the injustice”.

The sources explained that independence of judges affects every citizen, and therefore, restricting it to the transferee judge on the ground of locus standi exposes the double standards of the judiciary. As a result, the affected judge, it is pointed out, will not have the confidence to challenge the recommendation of the Collegium.

They point out that this is what had happened in the case of the former Chief Justice of the Madras High Court, V.K.Tahilramani, who too was transferred to Meghalaya High Court, before she resigned in protest in 2019.

In the present case of transfer of the Chief Justice Banerjee, it is asked, if the Collegium resolution was pre-existing as on September 16, where was the question of the Collegium asking his preference of high courts, one of which he could be transferred to, if at all he had a choice.

(V. Venkatesan is the Editor of The Leaflet.)