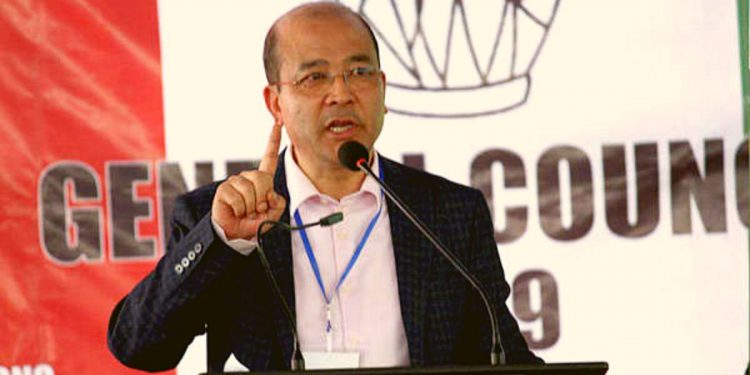 Did Meghalaya Assembly Speaker ignore the ratio of the Supreme Court's Constitution bench while recognising the merger of 12 rebel Congress MLAs with TMC?

ON Thursday, Meghalaya legislative assembly Speaker Metbah Lyngdoh rejected the disqualification petitions filed by the Indian National Congress (INC) against 12 of its rebel MLAs who had recently switched their allegiance to the All India Trinamool Congress (TMC), and formally approved their merger with the TMC in the assembly.

On November 25, 12 of the 17 INC MLAs in the Meghalaya assembly, including former Chief Minister Mukul Sangma, resigned from the Congress party and joined the TMC.

Subsequently, INC MLA M. Ampareen Lyngdoh, on November 29, filed 10 petitions with Speaker Lyngdoh against the 12 MLAs seeking their disqualification as per Schedule 10 of the Indian Constitution, which provides for disqualification of legislators on ground of defection. She filed two more similar petitions again earlier this month.

Thereafter, Speaker Lyngdoh issued notices to the 12 turncoat MLAs asking them for their responses to the petitions. After receiving their responses, he made his decision on Thursday.

“I am satisfied that the merger of 12 members of Indian National Congress is valid under the 10th schedule of the Constitution and does not attract disqualification … I do not find merit in the submissions made in the petition filed by Ampareen Lyngdoh, MLA, and therefore, the same is hereby dismissed,” the speaker said in his order.

As per paragraph 4 of Schedule 10, the merger of MLAs of one party with another shall not attract disqualification under the Schedule only if not less than two-thirds of the members of the legislature party concerned have agreed to such merger.

Paragraph 4 leaves unanswered whether it is enough to mobilize two-thirds of the members of the legislature party and merge with another party, in order to claim exemption from disqualification.  Are the defecting members under an obligation to demonstrate that the “original political party” has also merged with the party with which the two-thirds of the legislature party claim to have merged?

In Rajendra Singh Rana vs. Swami Prasad Maurya (2007), the Supreme Court’s Constitution Bench had held that those who had left the party would have prima facie to show, by relevant materials that there had been a split in the original party.  Although Paragraph 3 of Tenth Schedule was deleted by Parliament to derecognise splits in political parties earlier, the case before the Supreme Court dealt with the split in the Bahujan Samaj Party, which had taken place prior to the deletion. Some experts believe that the ratio of this case may apply to cases in which merger is disputed.

Since the INC originally had 17 MLAs in the Meghalaya legislature, out of which 12 merged with the TMC, they were saved from disqualification by paragraph 4, since the number of defectors were comfortably above the two-thirds threshold, it would appear. However, if one applies the ratio of the Supreme Court in the Rajendra Singh Rana, the result could be different. It is not clear whether the Speaker of the Meghalaya assembly has given a reasoned order in this case, so as to examine whether it dealt with the issue, which has been settled by the Supreme Court in the case of splits.

The Meghalaya legislative assembly has a strength of 60, out of which 41 MLAs are from the ruling National Democratic Alliance coalition. The TMC, which originally had no representation in the House, has replaced the INC as the principal opposition party in the House with 12 MLAs.

Ampareen Lyngdoh has declared that she “respect[s]” the Speaker’s order, and doesn’t intend to challenge it.

Meghalaya is scheduled to go to polls in February 2023.

The tenth schedule was added to the Constitution in 1985 via the fifty second Constitutional amendment, and its constitutionality was upheld by the Supreme Court in its judgment in the case of Kihoto Hollohan vs. Zachillhu & Ors. (1992).