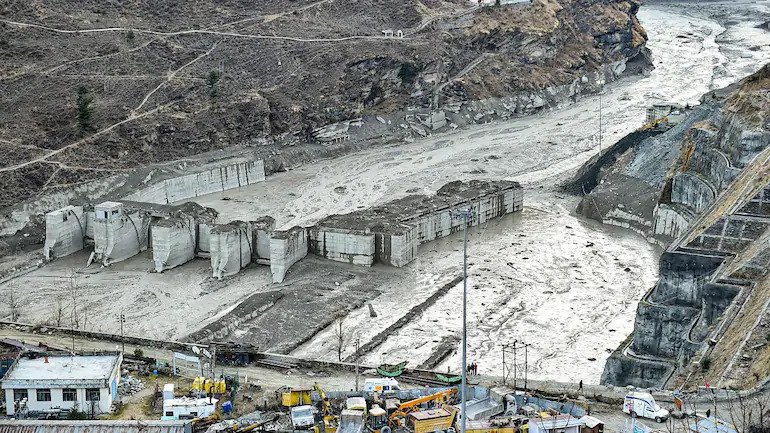 All processes in nature are parts of a chain reaction, climate change currently being the end result of them all. Development at the cost of destruction of nature would result in calamities far greater than what Uttrakhand has recently witnessed, writes KRISHNA JHA.

SITTING at the edge of the debris, we are all aware that calamity would not spare anyone, it is just a matter of chance. There will be deforestation, dams restraining the flow of rivers and then the bridges, and for each one, there would be uprooted trees, lost rivers and denuded peaks. In silence, nature accepts the void it faces, yet cannot restrain the upheavals coming in the aftermath — the price of the imperatives for the stepping up of ‘development’.

The eternal dilemma remains unresolved. Each and every developed country has been living under the shadows of disaster. Yet they push those that are not so developed towards the same end. Picturesque Chamoli stands devastated. Till now, according to available reports, at least 197 people are missing and 32 dead. Drones in the tunnel at Tapovan and Rishi Ganga valley are still unable to trace any living or dead.

Scientists have observed that the pattern of climate has been undergoing a major shift. While there was no sign of snow on February 2nd this year, on the 6th, a thick layer was noted on the upper region, which melted on February 7th, as by 12 noon, there was no trace of snow there. The thick layer of snow slipped down fast with mud, slush, boulders and debris crushing everything in the way, including the glacier perched among the peaks.

It is now high time we take stock of all the steps taken in the name of development. Among them, the most common is the felling of trees or deforestation. The justification given is industrialisation and urbanisation, that lead to progress. There is consolation also with promises of forestation. Replicating nature is never possible. Whatever is created in the name of revegetation is never the same.

First, the density of forest which is imperative for protecting against environmental degradation is lost. Then every time a tree is felled, the soil level gets eroded. Afforestation will fetch only different type of soil, devoid of the natural richness. The entire ecosystem destroyed once can never be recreated. The huge loss of water sources is another horror that follows and can never be restored.

One of the biggest harm is the disappearance of glaciers, a major source of fresh water in the world. These are directly linked with drinking water and rivers. Glaciers also maintain the temperature balance. Glacier destruction would generate snowstorms at some places and in others, the water level would go up. It would also lead to drought as it happened in Alaska and also in several other places.

This contributes to the general rise in earth’s temperature. It also influences general life forms, including that of humans. Glaciers are basically sensitive to temperature and sound. Their density is very low and reacts even to the sound of gunshots, or vehicles moving nearby. A few years back, in Uttarakhand, someone shot a gun in the air near the Mana glacier and the result was a break in the glacier that led to disastrous results.

There is also the issue of carbon emission. More the trees are felled, carbon emission levels would be higher. More the ocean and lakes are filled with slush, higher would be the carbon level. The reason is that forests and the oceans do the job of a sink for carbon. They absorb all the carbon emitted in nature. Trees take carbon dioxide from air and water from the earth and create carbohydrates from them. This process is interrupted as a result of deforestation. Carbon remains unabsorbed.

Unassimilated, the level of carbon goes up in the atmosphere. Another related process that gets affected is carbon compounds that are created inside the plants and are released without going through the entire process. Thus carbon is absorbed in soil and atmosphere, generating more carbon dioxide. Carbon emissions grow and result in a rise in temperature. All these changes greatly influence the air and water. Global waves with fixed annual cycles stand interrupted now. This has a negative influence on life and seasonal cycles.

One example of the influence is the withdrawal of Gomukh from where river Ganga originates. Now the source has withdrawn itself several miles back bringing down the water flow.

A rise in temperature also results in the melting of snow which leads to more frequent floods. The flow of slush makes the water level go up. Rate of ice formation is going down with the rise in heat and has led to a further withdrawal of rivers.

With this massive chaos leading to severe damage in the eco-balance, there would be more and greater mishaps in the future.

We have to understand that any interference with nature has chain reactions and each one is more severe than the previous one. And also that more often than not at the receiving end are the larger masses, also a part of nature only. Uttarakhand episode must not be repeated.

In itself, it is a signal for greater destruction.

(Krishna Jha is a journalist. Views are personal.)