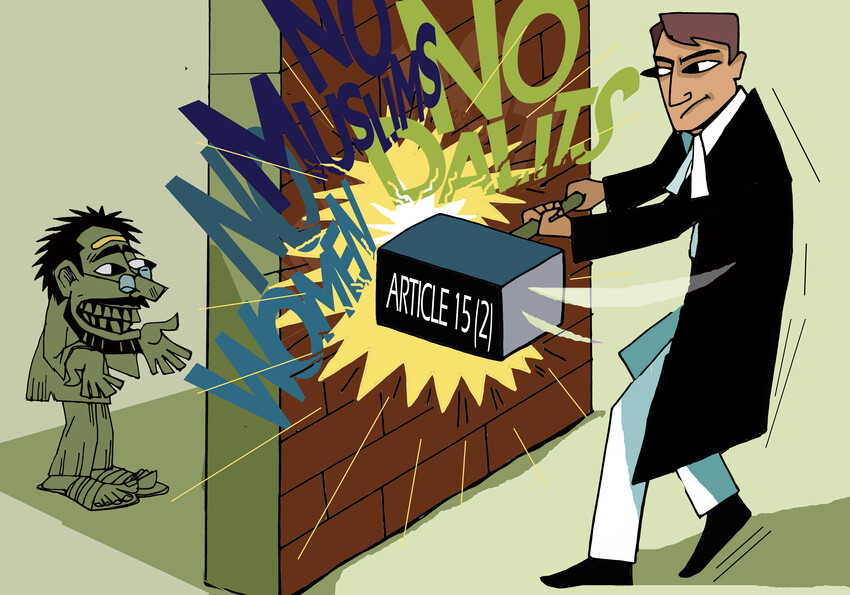 Despite widespread discrimination in the private sector on the basis of caste, gender and religion, among other things, very few cases are litigated on private discrimination before our courts. The Supreme Court’s interpretation of Article 15(2) of the Constitution in its 2011 judgment in the case of Indian Medical Association vs. Union of India provides recourse, mandating the private sector must conduct its affairs in a non-discriminatory manner, writes THULASI K. RAJ.

IN Vattavada panchayat of Idukki district in Kerala, members of the Chakkiliyan community, being Dalits, were not allowed to enter local barber shops. This discriminatory practice compelled them to travel to find other barbers farther away. Finally, the local panchayat set up a public barber shop in September 2020. The public shop was meant for access to all, without distinction.

Another example: A friend of mine asked me for suggestions for which law firm to join, after she finished her law course. When we discussed the name of one particular firm, she mentioned that the firm does not hire women as junior lawyers. It has an unofficial ‘no women’ policy, and is exclusively run by men.

Also read: How states can lead the fight against discrimination

Does the Constitution provide protection against private discrimination?

Private discrimination in India is pervasive. The Indian Constitution contains various provisions to address discrimination under its chapter on fundamental rights.

In this scheme, Article 15(2) of the Constitution is unique. While most other fundamental rights concern the actions of the State, this provision is addressed to private individuals. This provision reads:

“No citizen shall, on grounds only of religion, race, caste, sex, place of birth or any of them, be subject to any disability, liability, restriction or condition with regard to: (a) access to shops, public restaurants, hotels and places of public entertainment; or (b) the use of wells, tanks, bathing ghats, roads and places of public resort maintained wholly or partly out of State funds or dedicated to the use of the general public.”

Ours is a Constitution which recognises the threat of private discrimination, and prohibits it in its text. At the time of enactment of the Constitution, it was recognised that prohibiting State discrimination alone will be insufficient to promote substantive equality. Dalits were – and still are, in recurring instances – denied access to public places; the practise of untouchability was widespread; sex-based discrimination pervaded every social institution – this too is an evil that continues to this day.

Unfortunately, Article 15(2) is barely used in Indian constitutional practice. In discrimination jurisprudence, most cases are filed against the State, and not against private parties. Despite pervasive discrimination in the private sector by employers and landlords, very few cases are litigated on private discrimination before our courts.

It is perhaps worth asking: against whom we can claim and enforce Article 15(2)? When can this constitutional protection be invoked?

Assume that – as it often happens – a Muslim couple is being denied housing by a private landlady, on the ground of their religion. Let us call them Aysha and Zain. Housing is not expressly mentioned in Article 15(2). Can the couple invoke Article 15(2) against her, despite this omission? In a research article published in the Indian Law Review titled “Private Discrimination, Public Service and the Constitution,” I argue that they can, based on the principle of ‘public service’.

In its judgment in the case of Indian Medical Association vs. Union of India (2011), the Supreme Court considered the question of whether a private unaided college can permissibly discriminate under the Constitution. One way to decide that would have been the plain linguistic approach, and reject the discrimination claim.

The plain linguistic method is a way of interpreting constitutional provisions, by their ordinary meanings. A linguist might often refer to dictionaries to understand the meaning of a term in the law. A linguist would respond that colleges are not mentioned in Article 15(2) and therefore, they are outside the purview of that law.

There are two other principles which could be used to interpret Article 15(2). One is that of the ‘public actor’ principle. This principle holds that certain public actors, like employers or landlords, by virtue of having taken up a public vocation, are bound not to discriminate against others. However, the content and the spirit of Article 15(2) are aimed at the service or the good in question, and not the identity of the actor or ownership. Therefore, we must reject the public actor principle.

Another principle is that of ‘economic goods.’ This principle understands Article 15(2) to have a purely economic dimension. But the social access element of Article 15(2) is significant. Discrimination is not limited to monetary transactions, but is visible in public places and social spheres. Therefore, it is a mistake to conceive of the anti-discrimination provision under the Constitution from an economic perspective alone.

In the IMA judgment, the court did not rely on a plain linguistic approach, nor on the other two options above. Instead, it recalled that the Constitution must be read holistically, as opposed to isolated compartments. It said:

“In this regard, the purport of the above exposition of clause (2) of Article 15, when read in the context of egalitarian jurisprudence inherent in Articles 14, 15, 16 and Article 38, and read with our national aspirations of establishing a society in which equality of status and opportunity, and Justice, social, economic and political, would imply that the private sector which offers such facilities ought not to be conducting their affairs in a manner which promote existing discriminations and disadvantages.”

The court’s renewed interpretation of Article 15(2) is in consonance with the history, social context, and the jurisprudence of discrimination law.

Also read: IIT Kanpur Professor under a cloud after he complains of discrimination and harassment

Not only does Article 15(2) reflect this principle, there are two distinct features of it. Now, can a dominant caste group prevent others from entering a public street? What about a private beach? A private company? To answer these complex questions, it is necessary to determine what other ‘services’ are public in the relevant sense to claim constitutional protection.

The answer is two-fold: First, the service in question must be a vital element of modern life. This includes aspects such as employment, housing, and recreation. Second, the service must be one that secures dignity to individuals. When Dalits are prevented from entering public places, for instance, the foremost infringement is on their dignity, through the message that they are less worthy.

Social exclusion is present throughout the chronicle and context of discrimination in India – the lack of access to public places has been central to it. Any attempt to end private discrimination must begin by clearly deterring such exclusion.

The article originally appeared in India Together.

(Thulasi K. Raj is a lawyer at the Supreme Court. The views expressed are personal.)