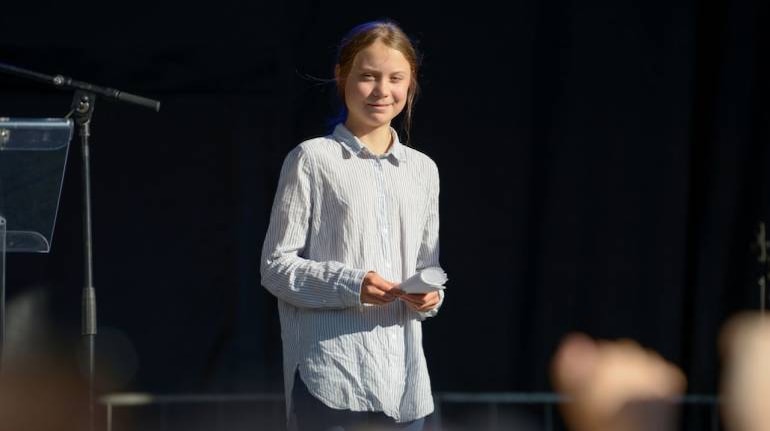 As the on-going farmer’s crisis garners global attention, the Indian government has been swift in criticising and muzzling the voices of those supporting the protests. From using celebrities as reinforcements for damage control to filing a flurry of FIRs against whoever speaks up against the government, its response against international recognition of India’s internal problems has been sharp. Added to the list of those that have been criminally charged over tweets are the creators of a toolkit shared by Greta Thunberg, reports Anjali Jain.

Several media reports claimed on Thursday that the Delhi Police have registered an FIR against Swedish teen climate activist Greta Thunberg over her tweets on the farmer’s protest, accusing her of “criminal conspiracy and promoting enmity.”

This claim has been refuted by the police in a press conference held on Thursday. Delhi Police Special Commissioner, Praveen Ranjan has said that a case has been registered against creators on an online “toolkit” and no one has been named in the FIR yet.

The FIR is the latest in a wave of charges that have been filed in a number of states against several prominent personalities, including journalists and former ministers, in relation to the ongoing farmer’s protests.

While addressing the press conference, Ranjan said: “We have identified some 300 accounts spreading dissatisfaction and disharmony towards the Government of India. ‘Toolkit’ account was being run by a group of Khalistanis. They had decided to conduct a digital strike post the Republic Day incident.”

Delhi Police has taken cognizance of a 'Toolkit Document' found on a social media platform that predates and indicates a copycat execution of a conspiracy behind the 26Jan violence. The call was to wage economic, social, cultural and regional war against India.

“We have recovered a document about the planned execution. We have found out that is a copycat execution. As of now, we have registered cases against the authors of that account. The case has been handed over to the cyber cell. Investigations are underway,” he added.

“Delhi Police is going to write to Google to get the IP address or the location from where the doc was made and uploaded on the social media platform. This is being done to identify the authors of the toolkit which was shared on the Google Doc,” Delhi Police sources said, as reported by ANI.

The “toolkit” in question that was tweeted by Thunberg states that it is: “meant to enable anyone unfamiliar with the ongoing farmers protests in India to better understand the situation and make decisions on how to support the farmers based on their own analysis.”

She had first tweeted about the protests on Tuesday night, following in the footsteps of pop singer Rihanna, who had first brought the protests to global attention. Rihanna had posted a one-liner, asking the world, “Why aren’t we talking about this?” along with a CNN story that talked about the internet blockade in the epicentre of the protests.

We stand in solidarity with the #FarmersProtest in India.
https://t.co/tqvR0oHgo0

These tweets had resulted in a spike in online searches related to the protests and had turned international attention towards them. Twitter was stormed with several other international personalities showing solidarity with the protests, including Meena Harris, who is the niece of American Vice President Kamala Harris. They were, however, also met with severe criticism and trolling by the Indian Twitterati.

Following up to this, the Swedish activist had shared a “toolkit” on Twitter, which contained information on the agitation and how support for the protests can be shown. She wrote, “Here’s an updated toolkit by people on the ground in India if you want to help. (They removed their previous document as it was outdated.) #StandWithFarmers #FarmersProtest.”

A similar document had been posted by her the previous night which contained details on how the farmers can be supported on Republic Day, which has already passed last week. Along with the updated document that contained a list of seven ways to support the agitation, she also urged her international followers to storm Twitter and to organise protests near Indian embassies on February 13th and 14th this year. The Delhi Police believes that the toolkit “exposes the conspiracy by an organised overseas network” to instigate the farmer protests.

Soon after news of the charges levied against her emerged, Greta Thunberg strengthened her stance on the protests with another tweet: “I still #StandWithFarmers and support their peaceful protest. No amount of hate, threats or violations of human rights will ever change that. #FarmersProtest.”

I still #StandWithFarmers and support their peaceful protest.
No amount of hate, threats or violations of human rights will ever change that. #FarmersProtest

The Indian Government had meted out a sharp response yesterday to the international tweets flooding the platform in solidarity with the farm protests, saying they were by “a very small section of farmers” in parts of India and that it is “unfortunate” groups with hidden motives have now gathered international support.

"The temptation of sensationalist social media hashtags and comments, especially when resorted to by celebrities and others, is neither accurate nor responsible", says Government of India in response to recent comments by foreign individuals and entities on the #FarmersProtests pic.twitter.com/evEDvqrj6V

A statement issued by Ministry of External Affairs (MEA) spokesperson Anurag Srivastava said: “Before rushing to comment on such matters, we would urge that the facts be ascertained, and a proper understanding of the issues at hand be undertaken. The temptation of sensationalist social media hashtags and comments, especially when resorted to by celebrities and others, is neither accurate nor responsible,” along with the hashtags IndiaTogether and IndiaAgainstPropaganda.

Celebrities get Vocal for Local

In what seems to be a coordinated campaign, several Bollywood stars and sportspersons have since rallied behind the hashtags and shared Srivastava’s statement on Twitter, while posting about their support for the Indian government and its efforts to handle the situation “amicably”.

They also stressed that rather than paying attention to “half-truths” and “those trying to create differences”, Indian citizens should stand united and focus on the efforts of the government to resolve the on-going crisis.

Cricketing maestro Sachin Tendulkar tweeted: “India’s sovereignty cannot be compromised. External forces can be spectators but not participants. Indians know India and should decide for India. Let’s remain united as a nation. #IndiaTogether #IndiaAgainstPropaganda.” The rest of the tweets by celebrities were of the same essence, often using similar wordings and posted within a short time span.