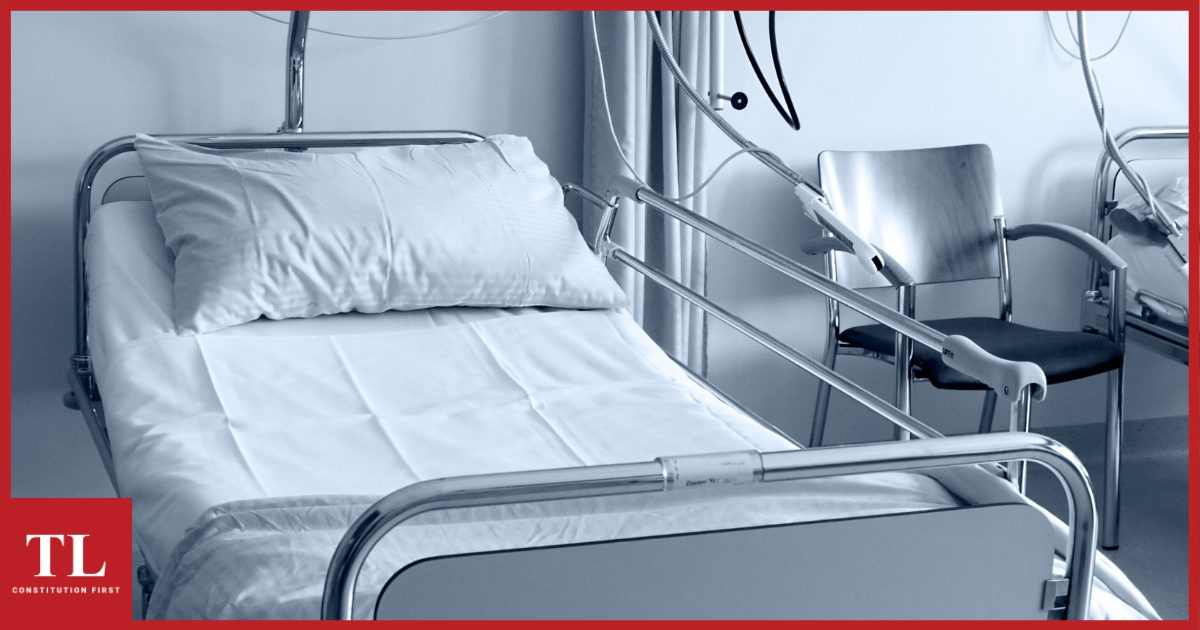 Recent orders of the Delhi government that reserve 60-80% of the ward and ICU beds in private hospitals—including those which provide specialised care for specific diseases and conditions—violate the fundamental right to equality of non-COVID patients. Delhi-based lawyer VINEET BHALLA explains how, by going over important Supreme Court rulings that place the principles of reasonable and non-arbitrary state action within Article 14 of the Constitution.

AS India grapples with its second nationwide COVID-19 wave, the Union and state governments are bringing in increasingly desperate and rushed policy measures to deal with the surge of infection across the nation.

Initially, the Delhi government ordered 14 private hospitals to turn into Covid treatment-only facilities; however, after meeting representatives of these hospitals, who raised concerns over the lack of treatment options for non-Covid patients, it rolled back its decision.

Understandably, these orders have miffed both medical experts and non-Covid patients in Delhi, with some leading doctors in the city labelling the orders “absurd” and “unfair”.

One doctor rightly said that most hospitals under the purview of these orders are super-specialty hospitals that perform advanced and very complex surgeries, and their subject-specific medical expertise is not required to treat COVID-19 patients. Another doctor has said patients rely on specialised hospitals for cancer treatment, surgeries, and other critical care, and cannot just go to another hospital.

These orders must also concern Constitutionalists, for they are in direct violation of the spirit of Article 14 of the Constitution of India.

Article 14 of the Constitution of India provides the fundamental right to equality. Very concisely, it says, “The State shall not deny to any person equality before the law or the equal protection of the laws within the territory of India.”

Over the years, the Supreme Court of India has evolved a robust jurisprudence on what these 24 words encompass.

In 1950, the Supreme Court, for perhaps the first time, introduced the notion of non-arbitrariness into the understanding of equality concerning Article 14, with a five-judge constitutional bench holding in Charanjit Lal Chowdhury vs. Union of India:

“The legislature undoubtedly has a wide field of choice in determining and classifying the subject of its laws, and if the law deals alike with all of a certain class, it is normally not obnoxious to the charge of denial of equal protection; but the classification should never be arbitrary.”

Then in 1952, a seven-judge Constitutional bench of the apex court held, in its landmark judgment in The State of Bengal vs. Anwar Ali Sarkar:

“Article 14 secures all persons within the territories of India against arbitrary laws as well as arbitrary application of laws. This is further made clear by defining ‘law’ in Article 13 (which renders void any law which takes away or abridges the rights conferred by Part III) as including, among other things, any ‘order’ or ‘notification’ so that even executive orders or notifications must not infringe Article 14.”

So, it is not just legislative action but also executive action of the State that must not be arbitrary or discriminatory.

In 1973, a five-judge Constitutional bench of the apex court, in its landmark judgment in E.P. Royappa vs. State Of Tamil Nadu and Another built upon this jurisprudence further: “…equality is antithetic to arbitrariness. In fact, equality and arbitrariness are sworn enemies; one belongs to the rule of law in a republic while the other, to the whim and caprice of an absolute monarch. Where an act is arbitrary it is implicit in it that it is unequal both according to political logic and constitutional law and is therefore violative of Article 14…”

This was re-affirmed by a seven-judge Constitutional bench in 1978 in the celebrated Maneka Gandhi vs. Union of India judgment, in which Justice PN Bhagwati observed, “Article 14 strikes at arbitrariness in State action and ensures fairness and equality of treatment.”

The relation between non-arbitrariness and equality has been subsequently built upon by the Supreme Court in several judgments. For instance, a three-judge bench noted, in 1979, in R.D. Shetty vs. International Airport Authority:

“The principle of reasonableness and rationality which is legally as well as philosophically an essential element of equality or non-arbitrariness is protected by Article 14 and it must characterise every State action, whether it be under authority of law or in exercise of executive power without making of law.”

Then in 1981, in Ajay Hasia vs. Khalid Mujib Sehravardi, a five-judge Constitutional bench further elaborated on this and held that wherever “there is arbitrariness in State action whether it be of the legislature or of the executive or of ‘authority’ under Article 12, Article 14 immediately springs into action and strikes down such State action. In fact, the concept of reasonableness and non-arbitrariness pervades the entire constitutional scheme and is a golden thread which runs through the whole of the fabric of the Constitution.”

A three-judge bench of the apex court provided yet another aspect of this relation, in its 1984 judgment in A.L. Kalra vs. Project and Equipment Corporation. In it, Justice Desai held that one “need not confine the denial of equality to a comparative evaluation between two persons to arrive at a conclusion of discriminatory treatment. An action per se arbitrary itself denies equal of protection by law.”

A division bench of the Supreme Court elaborated on this question in 1991 in its judgment in Kumari Shrilekha Vidyarthi vs. State of Uttar Pradesh thus: “Where a mode is prescribed for doing an act and there is no impediment in following that procedure, performance of the act otherwise and in a manner which does not disclose any discernible principle which is reasonable, may itself attract the vice of arbitrariness.”

‘Every State action must be informed by reason and it follows that an act uninformed by reason, is arbitrary. Rule of law contemplates governance by laws and not by humour, whims or caprices of the men to whom the governance is entrusted for the time being.’—Supreme Court in Kumari Shrilekha Vidyarthi.

In 2002, Justice Arijit Pasayat answered the question in the following manner in the Supreme Court’s three-judge bench decision in the matter of Sharma Transport vs. Government of Andhra Pradesh:

‘The expression ‘arbitrarily’ means: in an unreasonable manner, as fixed or done capriciously or at pleasure, without adequate determining principle, not founded in the nature of things, non-rational, not done or acting according to reason or judgment, depending on the will alone.’

The object of this differentiation, the order itself says, is to “augment the ICU/HDU bed capacity for COVID-19 patients” because of the “unprecedented surge in the number of clinically severe Covid cases”.

In other words, the Delhi government is giving the treatment of COVID-19 patients priority over all non-Covid patients. It is here that the arbitrariness of the order’s objective is evident.

On 16 April, Delhi reported almost 20,000 new cases and 141 deaths from COVID-19. Both figures are a single-day record that made Delhi the worst-hit city with a Covid positivity rate of almost 20%, which means the actual number of cases is certainly a lot higher. So, it is true that Covid is spreading in Delhi at an unprecedented rate. Yet, it is not the only deadly disease that the city must deal with.

In 2010-13, Delhi’s coronary heart disease-related mortality rate was over 190 per 100,000, and among the highest across all states in the country. As per a 2005 study, Delhi’s adult population had a high chronic renal failure prevalence of about 7,852 per million persons, and a 2015 study estimated the prevalence of chronic kidney disease in Delhi at 8.7%. Another study of the data from 2012-16 with the National Cancer Registry Programme find that Delhi has the highest age-adjusted incidence rate for males among all regions excluding North-East India of 147 per 100,000 population, and the second-highest for females among all regions excluding NE of 141 per 100,000 population.

Delhi also tops the whole of Asia as the city with the maximum incidence of childhood cancers in boys in the 0-14 age group and has the highest incidence of cancer among all Indian cities for girls in the same age group.

For these diseases and plenty others, residents of Delhi, as well as those from the rest of the country, rely on the many high-quality hospitals in the city that provide specialised treatment for these afflictions.

By reserving seats for only COVID-19 patients at private hospitals, the Delhi government is essentially signalling that it privileges healthcare for Covid patients more than that for those suffering from equally dangerous, if not more fatal, diseases. This amounts to unequal treatment of the two classes of patients with no demonstrable difference in mortality rates or other risks to the patients’ health and well-being.

Is the distinction created by this executive order based on any reasonable grounds? Or does it seem entirely grounded in the “whims or caprices of the men to whom the governance is entrusted for the time being”; in other words, “without adequate determining principle, not founded in the nature of things, non-rational, not done or acting according to reason or judgment, depending on the will alone”?

It is evident that the Delhi government’s order rests on a manifestly arbitrary object. It, therefore, negates equality by denying the equal protection of law to non-COVID-19 patients, and therefore, violates Article 14 of the Constitution.

The Delhi government’s impugned orders were forced by its failure to add capacity to its existing COVID care facilities and consequently being caught short of beds.

Even before the pandemic, Delhi was short of healthcare facilities. The city lacked trained medical staff, doctors, medicines, emergency devices, and even chemists. Besides, the standard of healthcare at government and private hospitals was often less than desirable. Thus, now corralling away beds for COVID-19 patients can only mean a significant uptick in hardships of all other patients.

Now, in its attempt to shift the responsibility onto private hospitals, the government is, unfortunately, violating the principle of non-discrimination in State action imbued in Article 14.

(Vineet Bhalla is a Delhi-based lawyer. The views expressed are personal.)