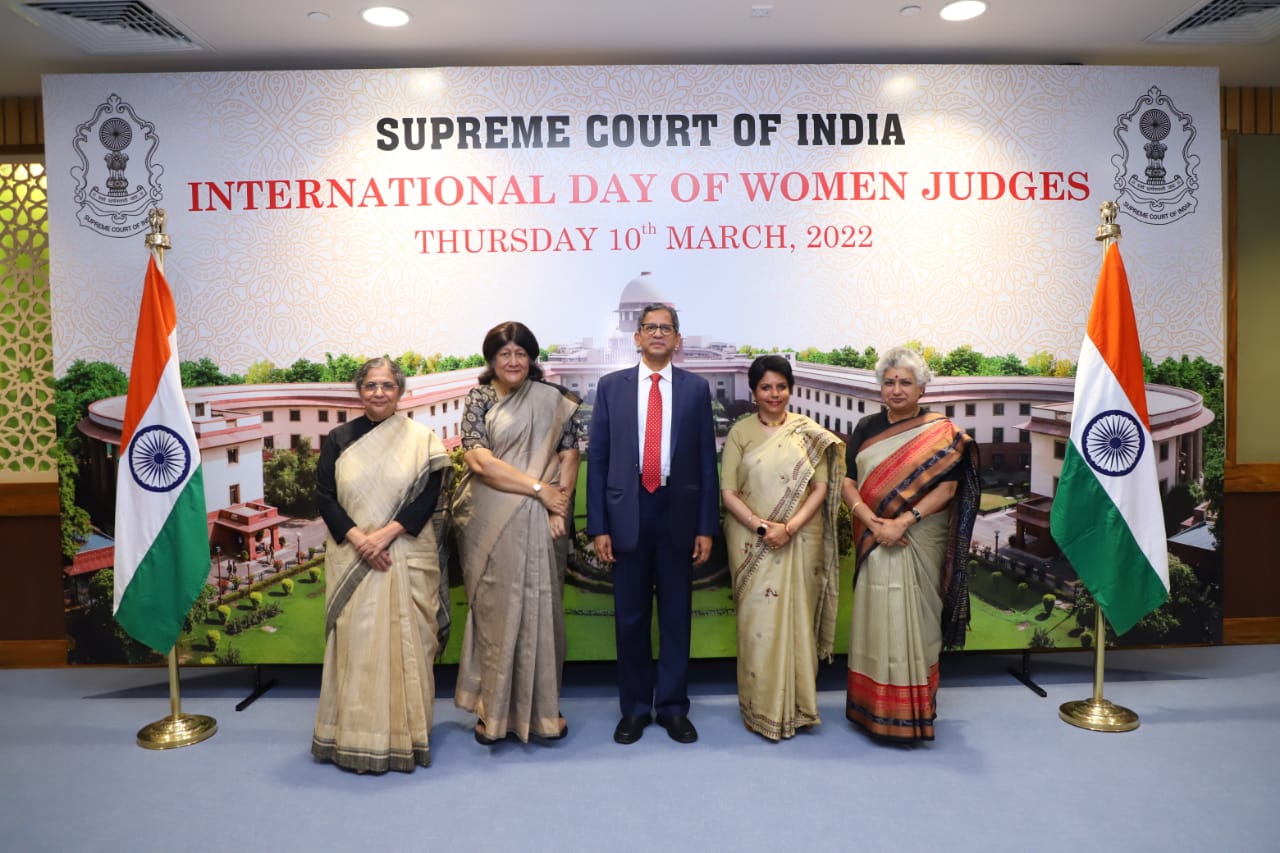 “UNFORTUNATELY, so far only 17 of the 37 women recommended (by the Supreme Court Collegium) to High Courts were appointed. The others are still pending with the Government. There are numerous factors behind the under-representation of women in judiciary. The primary reason is deeply ingrained patriarchy in our society”, the Chief Justice of India [CJI], N.V. Ramana has said.

He was speaking at a virtual event organized by the Supreme Court to celebrate the International Day of Women Judges. The other speakers included Justices Indira Banerjee, Hima Kohli, B.V. Nagarathna and Bela M. Trivedi.

In the words of CJI Ramana, often, women face hostile atmosphere within the courtrooms.

Harassment, lack of respect from members of the Bar as well as the Bench, and the silencing of their opinions, are some of the other reasons for their lack of representation, CJI Ramana opined.

Highlighting the statistics relating to women lawyers in the country, the CJI said that only 15 per cent out of nearly 17 lakhs advocates registered in the country are women.

One of the suggestions made by Ramana to improve this is to create a better enabling environment for women lawyers to pursue their careers.

“A good number of women law graduates are compelled to give up their professional ambitions due to societal expectations. We need to create enabling environment for women to pursue their career in law. Balancing personal and professional life is a huge challenge for women.”

Further, the CJI said that women should be given preference while making appointments as panel advocates, which will pave their path to the bench.

With this, he stated further that the need of the hour is sensitization and emphasis on inclusivity.

The Chief Justice also highlighted the need for women from all classes and sections to find a place within the judicial system. This is mainly because the atrocities faced by women in rural areas or by women from marginalized communities are often under reported and do not see the light of the day.

“Most importantly, the injustices faced by women are compounded by intersectional issues of socio-economic conditions. Therefore, we need women from all classes and sections to find a place within the judicial system.”

The CJI was also called for reservation of girl children in legal education to better the gender-based gap in the legal field.

Justice Banerjee observed that the representation of women in the Indian Judiciary has been abysmal since the country’s independence.

Allahabad High Court is one which has an approved judge strength of 160 judges. Currently, the high court has 93 judges, out of which only 5 are women.

Citing the example of a judge of the Supreme Court of the United States, Justice Ruth Bader Ginsburg, Justice Banerjee said:

“…she firmly believed that she did not fight for women rights but for equal protection of human rights. We sincerely think that the principle of appointment followed by Justice Ginsburg will be followed here and more women judges are appointed before I (Justice Banerjee) demit office in September. Our judiciary cannot excel if women left behind.”

Pushing for better representation in the Bar as well as the Bench, Justice Trivedi observed that every democratic society expects that there is equal representation of women in judiciary.

“…miniscule representation of women in the judiciary will nurture a belief that women do not belong to leadership, though the symbol of justice is a lady.”

Talking about the problems relating to judges’ bias, Justice Trivedi remarked that increasing the diversity of judges would reduce the likelihood of the same, which may occur due to the one-sided representation of one gender.

Sharing a similar line of thought, Justice Nagarathna stated that inclusion of women in judiciary will ensure that decision making process is more inclusive, responsive and participatory of all levels.

According to her, a woman judge would sensitize the judiciary.

“When a woman judge decides a case, she brings her myriad life experiences to the ambit of judicial decision making which are pertinently different from men.”

Appointment of more women judges to the courts is not only the need of the hour but also essential to provide an atmosphere for the intellectual development of women judicial officers, she averred.

She added that female judicial appointments at senior levels could, to a large extent, help with gender stereotypes.

Justice Kohli was of the view that more women judges on the bench would serve as an inspiration to budding women lawyers. She quipped

“Women judges give an impetus to budding women lawyers to aspire for judicial posts and for excellence in legal profession. They shatter the stereotype reaction as women are not fit to adorn the bench.”

She also recommended that students be taught about successful women professionals and not just limited to the field of law.

“…women judges send a powerful message across the country that courts at all levels are open and approachable which can ensure justice without discrimination based on caste, colour, creed or sex.”

Speaking about the four women judges presently serving at the Supreme Court including herself, she pointed out that all of them hail from different regions of the country.

“We four, hail from different regions of this country – one is from the north and other is from the south. The third from the east and the fourth, from the west. Our upbringing and backgrounds are diverse. Our career graphs don’t match but the underlying bond of being women judges charting our own independent journey, runs deep.”

Around 6,000 judicial officers were part of the meeting, and over 8,000 viewers watched the event live on YouTube.