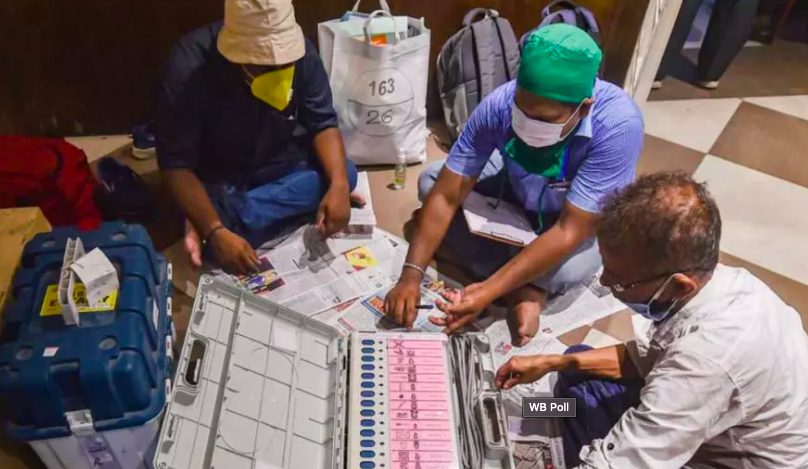 Narratives constructed around the West Bengal Assembly elections largely revolve around Trinamool Congress (TMC) leader Mamata Banerjee, who has been lavishly praised for wooing a majority of voters, in a variety of ways, to win for the third time in a row. The TMC’s victory has been ascribed to Banerjee’s social welfare measures; her strategy of triggering Bengali nativist emotions to counter the Hindi-speaking national leaders propagating Hindutva; and her fearlessness, cited as the principal factor why she contested from Nandigram.

These narratives, with their primary focus on Banerjee’s role, reduce the people of West Bengal to mere consumers in the Great Shopping Mall of Democracy. It was as if their only task was to figure out who among the hawkers had the best sales pitch. Does anyone resist the offer of “buy one, get one free”? West Bengal did, turning down what was supposedly the most lucrative deal—elect the Bharatiya Janata Party (BJP) to power in Kolkata and get a State-friendly, development-loving Prime Minister as well!

Might it not be the other way round then—that the people knew what they did not want, and spurned the BJP’s game of seduction?

It was a given, even before the bugle for the Assembly elections was sounded, that the Muslims, who comprise 27% of West Bengal’s population, would not vote for the BJP. This meant the BJP could come to power only by bagging an extremely large share of the remaining 63% of votes and also hope for Muslim votes to get splintered between the TMC and the Sanjukta Morcha (SM), which comprised the Left Parties, the Congress and the Indian Secular Front, an organisation floated by cleric Abbas Siddiqui.

This electoral compulsion was among the factors why the BJP pressed hard on the Hindutva pedal. The party raised the bogey of Bangladeshi Muslims flooding West Bengal and turning it into a mini-Pakistan. It labelled Mamata as Mumtaz Begum and projected TMC lumpen as footsoldiers of the religious minority seeking to repress the majority.

In the end, though, the BJP came a distinct second, as Figure I shows.

(Note: SM is Sanjukta Morcha, an alliance of Left Front, Indian National Congress and Indian Secular Front. TMC’s strength is down to 212, as one of its MLA died after the voting day; elections in Jangipur and Samsergunj were countermanded.)

The BJP lagged behind the TMC by 10 %age points, as Figure II shows. The vote-shares have been calculated based on actual seats the parties contested and the total votes polled in them.

The magnitude of the TMC’s victory led some BJP leaders to blame the Muslim consolidation for their party’s defeat. Nobody cared to ask what else could have been the response of a community viciously targeted for its religious identity. Muslims feared a BJP government would use the triad of NRC-NPR- CAA (National Registers of Citizens-National Population Register-Citizenship Amendment Act) to torment them, as had been the experience of their religious brethren in Assam.

BJP leaders, however, took comfort from their party growing from just three seats in the 2016 Assembly elections to 77 in 2021. But this rise of the BJP, impressive for any party, conceals a grim story—instead of improving upon its performance in the 2019 Lok Sabha elections, the BJP sharply declined in 2021.

In Figure III, we take the Assembly segments in which the TMC and the BJP led in 2019 as the quantum of seats they won. The SM did not exist then; the Congress and the Left had fought separately. We add together the seats in which each led and assign those, for the sake of comparison, to the SM.

It was said the BJP won 18 parliamentary constituencies (or 121 Assembly seats) in 2019 because a large %age of SM voters turned to the BJP. Figure IV provides the vote-share of parties over the three elections.

Figure IV shows the SM lost 3.4% of its vote-share in 2021, in comparison to 2019, but so too the BJP—2.2 %. Their cumulative loss of 5.6% of votes was almost neatly transferred to the TMC, which bagged 48.7% of total votes polled in the seats it contested. It is likely that the 2% of BJP’s voters who left the party in 2021 were mostly Hindus, as the party barely bags Muslim votes.

It is more complicated to identify the 4% of SM’s voters who left its fold in 2021. Could they have all been Muslims? Figure V shows eight regions of West Bengal and their respective Muslim population. 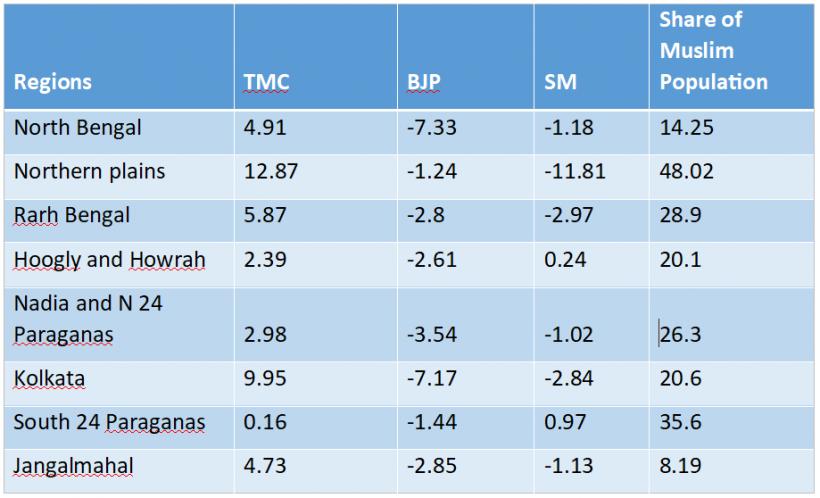 (Note: The division of the state is based on socio-economic indicators and geographical contiguity at the district level. North Bengal consists of Jalpaiguri, Alipurduar, Darjeeling, Cooch Behar; Northern plains comprises Uttar and Dakshin Dinajpur, Malda, Murshidabad; Rarh Bengal is made of East and West Burdwan, Birbhum; Jangalmahal has Bankura, Purulia, E and W Medinipur, and Jhargram.)

The TMC gained across all regions, an astonishing 12.87% of votes in the Northern plains, where Muslims comprise 48.02% of its populations. However, in South 24 Parganas, which has a Muslim population of 35.6%, the TMC’s gain was less than 1 %. It seems to be the case that the presence of Muslims ballooned the TMC’s vote-kitty.

But then, the TMC also gained 4.73% of votes in Jangalmahal, which has a Muslim population of just 8.19%. Muslims are 20% of the population of Kolkata, which has 11 Assembly seats, yet the TMC’s vote-share expanded by nearly 10 % in 2021, comparing very favourably with its performance in the Northern plains. Certainly, the accretion in the TMC’s votes happened because more liberal and secular Hindus in 2021 voted for the party than they did in 2019.

This consolidation of anti-BJP voters across communities becomes quite apparent when we look at the voting patterns across districts, which is shown in Figure VI.

In the Muslim-dominated Murshidabad district, both the TMC and the BJP gained, suggesting a sharp community polarisation. But the BJP lost votes in the Muslim-majority district of Malda, a Congress stronghold. It suggests that Congress voters thought the TMC was their best bet to defeat the BJP. In both districts, the SM’s losses were huge—and it is likely a large number of their Muslim voters in Malda and Murshidabad shifted to the TMC.

But the same logic would also suggest a Hindu consolidation against the BJP in Alipurduar, Purulia and Jhargram, where the presence of Muslims is minimal (See last column, Figure VI). Purulia was among the places the BJP rocked through its Ram Navami processions since 2017. Perhaps its Hindu residents decided that prolonged social instability was inimical to them.

The argument of consolidation against the BJP both within the majority and minority communities is strengthened when other dominant explanations for the TMC victory are examined.

For instance, the TMC’s strong showing has been credited to Banerjee’s welfare schemes, most of which, barring Swastha Sathi, a medical insurance scheme, and Duare Sarkar, a project to take government welfare schemes to the doorsteps of people, were already in place in 2019 when her party’s fortunes nosedived. Perhaps Duare Sarkar and Swastha Sathi prompted voters to vote out of gratitude for the TMC.

Welfare schemes are likely to have a greater resonance in rural than urban areas given their different socio-economic levels. Yet, as Figure VII shows, the urban sprawl of Kolkata and the rural spread of Bankura, the most urbanised and the least urbanised districts, both registered gains for the TMC and losses for the BJP. Clearly, the welfare scheme angle does not tell us the entire story.

Figure VIII shows the vote-shares of the three contenders in Kolkata.

Kolkata clearly shows that voting preferences in 2021 shifted because the people wished to deny power to the BJP, which lost, in 2021, around 5% of the votes it had polled in 2019, as it also happened with the SM. Their votes were largely transferred to the TMC.

In 2019, the BJP led in three assembly constituencies of Kolkata—Jorasanko, Shyampukur and Rashbehari—which do not have a large Muslim population. However, in 2021, the TMC won all these three seats with massive margins, gaining an average of 17% of votes, as Table XI shows.

Three of Kolkata’s assembly constituencies—Ballygunge, Chowringhee and Bhabanipur—are quintessentially cosmopolitan. These are religiously, linguistically, and economically diverse. It is as much the turf of the upwardly mobile as it is of the bhadralok, or the genteel folk, apart from having pockets of poverty. They all came together to thump the BJP, as Figure X shows.

Indeed, the TMC’s mammoth scale of victory in these three constituencies cannot be simply explained by Banerjee’s welfare measures. Perhaps the BJP’s shrill, communal election campaign drove away a chunk of its Hindu voters. For sure, the voting pattern shows that the people swept aside their past ideological affiliations to other parties to checkmate the BJP and Hindutva. They voted for the TMC not necessarily because it had the best bargain to offer, but because they did not want their state to be stranded with a deal that they thought would extract an extraordinary price from them.

This realisation had them rise to meet the BJP’s challenge. Some civil society groups banded together to start a forum, Bengal against Fascist RSS-BJP, which made use of songs and plays to explain to the voter why he or she should not vote against the BJP. Anyone who felt responsible for India contributed their mite. For instance, journalist Paranjoy Guha Thakurta, a regular contributor to NewsClick, produced videos with a song, Beware the Communal Croc, and interviews with Bengali public intellectuals explaining why the BJP in power would be inimical to West Bengal.

Such feverish activities, undertaken voluntarily, bankrolled through crowd-funding, have redefined the West Bengal Assembly elections as a watershed. Its results prove right political psychologist Shawn Rosenberg, who argued that democracy thrives with competent citizens—and starts wither away when they turn incompetent, lazy or passive, fit only to respond to WhatsApp fake news and hate messages. This profound fact is missed out in narratives constructed, rather obsessively, around leaders.

Even as Mamata Banerjee is credited for her party’s victory, the people of West Bengal should be credited for the defeat of the BJP. She should now respect the mandate by not engaging in sectarian and divisive politics.

Ajaz Ashraf is a freelance journalist based in Delhi; Zaad Mahmood is an assistant professor, Presidency University, Kolkata, and Soham Bhattacharya is a PhD scholar at the Indian Statistical Institute, Bangalore. The views are personal.