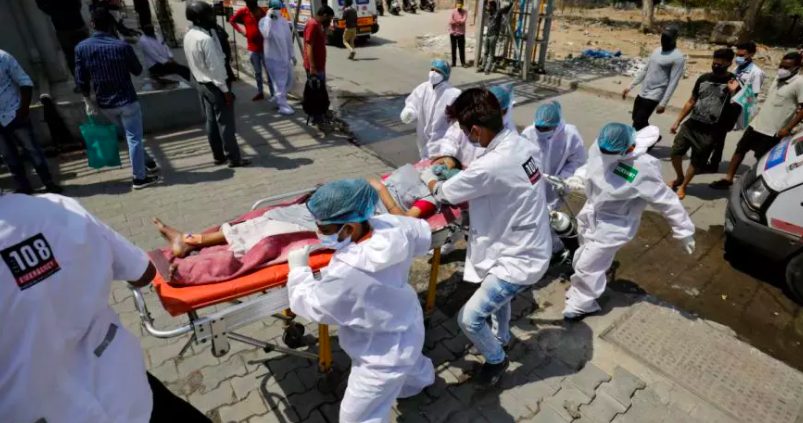 The whole country is reeling under the brutal second wave of the COVID-19 pandemic, breaking world records for daily cases. The health infrastructure has collapsed and vital medical supplies, such as oxygen, are nearing exhaustion. With hospital beds and ICUs full, and no oxygen leading to several tragic deaths, many hospitals have stopped admissions or have discharged patients. Thousands of people have been running from pillar to post for oxygen cylinders at least for use at home. COVID patients are helpless and literally gasping for breath.

Like it did last year, the government has failed to anticipate the second wave, which many experts had predicted, and make necessary preparations in the health system. If the Madras High Court felt that the Election Commission was responsible for “murder” by allowing huge election rallies, the Central government has been criminally negligent.

The present oxygen shortage is a combination of extraordinarily high demand, shortfall in medical oxygen production, and distribution problems. None of these were unknown.

India has total daily oxygen production capacity of around 7,127 tonnes for both industrial and medical use. The oxygen in both is essentially the same, made in the same way, and conforms to similar 95%-99% purity levels. The chief difference is in the containers they are stored or transported in, with those for medical oxygen required to have fewer impurities and related certification.

Government spokespersons, the Uttar Pradesh government and lately the Solicitor General appearing before the Delhi High Court, have repeatedly said there is no shortage of oxygen supplies, but only a transportation problem, state government mismanagement, besides hoarding and a black market. However, a closer look at the numbers shows that there is indeed a shortage in total medical oxygen production.

Official figures show that, as on April 24, daily production of total liquid medical oxygen (LMO) from all sources was 9,103 tonnes, expected to cross 9,250 tonnes by end-April, compared with 7,259 tonnes earlier. It was also stated that daily production had been increased from 5,700 tonnes in August 2020.

In pre-COVID India, daily demand for LMO was around 700 tonnes, jumping to 4,800 tonnes during the first wave. Most of the shortfall was made up by diverting supplies from different industries making oxygen for their own use. Production of industrial oxygen is estimated to be around 4,500 tonnes/day, of which nine priority sectors, such as nuclear, steel, pharma, petroleum refineries, waste water treatment etc, together account for about 2,500 tonnes. In mid-April, the government compulsorily diverted all industrial oxygen for medical use except in these nine priority sectors, which were also later roped in, and even enhanced their oxygen production to some extent.

However, diverting industrial oxygen can only be a temporary short-term measure. While larger companies may cope with the disruption, small and medium enterprise or SMEs are already facing a crunch. SMEs in Tiruchi making boilers for BHEL are reportedly shutting down while, ironically, BHEL’s own oxygen plants have been shut down for years. When all industries resume regular work, as they must, India will face a shortfall of around 5,000 tonnes/day.

Even total oxygen production of 9,000 tonnes/day is not as comfortable as it looks. If, as many models suggest, daily cases reach five lakh in May, oxygen demand could well cross 12,000 tonnes, with all major oxygen-using industries remaining closed. While current efforts may help for a while, another crisis looms.

The government has, therefore, recently issued an emergency tender for import of 50,000 tonnes of LMO and may import additional stocks later. India apparently also has a reserve stock of 50,000 tonnes, about which little has appeared in the public domain, but even that is only five days’ requirement.

Clearly, no effort was made by the government to augment production capacities for medical oxygen, despite the shortages experienced during the first wave.

The Central government is making much of the fact that, in order to augment oxygen supply, it has now ordered 551 Pressure Swing Adsorption (PSA) oxygen generating plants which would be installed in district hospitals for captive use as well as for supply to other facilities in the area. This is in addition to an earlier order of 162 PSA oxygen plants ordered last year. Again, a look behind these visible numbers tells another story.

PSA oxygen plants are a smaller, simpler and relatively less expensive way of producing medical oxygen gas than the production of liquid oxygen by big industries.

Briefly, ordinary air consists of 78% nitrogen and 21% oxygen, the remainder being argon and other inert gases. PSA plants work by absorbing nitrogen in a special sieve, thereby releasing oxygen, then reversing the process (swing) by releasing the nitrogen and restarting the cycle. The process produces 93-95% pure oxygen, suitable for most medical purposes, except in ICU ventilators. A plant usually takes four to six weeks to set up.

Many months after the pandemic started raging through India, the government floated a tender in late October 2020 for 150 PSA oxygen plants, adding another 12 later. The plants of different sizes were to be installed in district hospitals in 14 states. Unfortunately, as of today, only 33 plants have been installed in different states.

The Central government and ruling Bharatiya Janata Party spokespersons have frequently and loudly raked up this issue seeking to blame state governments for the laxity, alleging that funds were transferred to the states by the Centre. In reality, the plants were fully paid for by the Centre from the PMCares fund with states expected mainly to facilitate installation and the Centre constantly reviewing progress. The Centre now claims all remaining installations would be completed in the next month.

The important point here is, however, that these plants are really small. Total daily capacity of the 162 plants ordered last year at Rs.201 crore is only 154 tonnes! As many as 105 of these plants have capacity less than 1 tonne each, while the largest is of only 4 tonnes. The eight plants allotted to Delhi have total capacity of 14.4 tonnes, a drop in the ocean compared with the current daily demand of 700 tonnes!

It is, therefore, clear that these PSA plants (assuming the 551 additional plants are of similar capacity), do not significantly augment total oxygen capacity. The purpose of these plants is to provide rural and remote district hospitals with captive oxygen generators to provide some in-house oxygen supply without depending entirely on external suppliers. This is an important objective for the longer term, but cannot by itself address the present crisis. In Delhi, with the Aam Aadmi Party government now acquiring 40 more such plants, some individual hospitals may go off the critical shortage list, but the overall problem will remain.

At the time of writing, the Prime Minister’s Office (PMO) has announced it will acquire an additional 500 PSA plants over and above the 713 discussed above. It would be desirable to rethink the capacities of these PSA. For the future, it would also be a good idea to make in-house oxygen generation capacity mandatory for hospitals above a certain size, using either PSA-type technology or cryogenic LMO plants depending on size.

The main problem would still remain, that is, how best to augment overall production capacity of LMO independent of industrial oxygen.

There is also much talk these days of acquiring oxygen concentrators. These are portable bed-side equipment that produce oxygen from ambient air using a method similar to PSA units to 90-95% purity, but at only 5-10 litres per minute, not meant for ICU ventilator systems or critical patients requiring 40-50 litres per minute, but well suited for mild and moderate COVID patients. A major advantage of concentrators is that they can operate continuously 24 hours a day for up to five years or more.

Oxygen concentrators can play an important role in the oxygen supply chain, especially in contexts where oxygen cylinders are normally used. In India, concentrators used to sell at Rs.40,000-90,000 compared with cylinders at Rs.8,000-20,000, but are less cumbersome, and do not involve additional effort and costs of refilling and transport. Of course, prices of concentrators have doubled now, just as cylinders are sold in the black market at several times their nominal price. There is also a crippling shortage of cylinders.

The pre-COVID demand for concentrators was 40,000 units per year, which has now climbed to around 35,000 a month. Most supply in India is by 50-odd importers, of which eight are MNCs like Philips, the largest importer. Extremely low import duties of up to 0.75% make domestic manufacture uneconomical.

Very similar problems exist with different medical equipment, a problem consciously addressed, albeit belatedly, during the first wave for ventilators, PPE etc. Oxygen concentrators had clearly escaped attention. Industry association spokespersons have suggested that the government rope in BHEL to scale up domestic production, as with ventilators last year.

Transportation of liquid oxygen, of course, a major issue, and another one not anticipated or addressed.

Liquid oxygen has to be transported by special cryogenic tankers which carry LMO at minus 180 degrees C. India has a fleet of around 1,224 oxygen tankers, usually of 10 or 20 MT capacity, with a total capacity of 16,732 MT of LMO, mostly with LMO producers or transporters. However, with a turnaround time of six to seven days per trip, this effectively means daily availability of around 200 tankers to transport currently around 8,000 tonnes, about one-third of the number of tankers required.  The gap is too large to be bridged even by the ongoing re-purposing of around 1,200 tankers used for transporting nitrogen and argon.

Cryogenic tankers are one of the major items being imported by the Centre, some states like Delhi, and donated by several countries.

The efforts by the Railways to transport cryogenic tankers have also run into difficulties due to mismatch between the size of the tankers and bridge, tunnel etc clearances.

One cannot expect LMO manufacturers or transporters to keep so much idle capacity in anticipation of emergency situations. It,, therefore, clearly devolves upon the government, possibly both at the Centre and in the states, to plan for such contingencies and keep a stock of cryogenic tankers, possibly under the Disaster Management Agencies at relevant levels.

It is truly shocking that all these problems were not anticipated and addressed in the ample time available. Clearly, key lessons from the first wave were not learned, namely, that decision-making was over-centralised, that independent scientists and other experts were kept away from operational structures, and that message management was more important than facing and tackling ground realities. Criminal dereliction of duty!

A National Task Force for COVID-19 Management comprising high-ranking government officials and experts was set up in early 2020 and should have been the main body guiding policy for tackling the pandemic. The Task Force Sub-Group for Operations Management, a specialised function dealing with supply chains and logistics, has hardly been in the picture. It is also indeed amazing that this Task Force did not even meet in either February or March 2021. This body was also not consulted on the vaccination policy, just as it was not on lockdowns last year. All decisions are centralised and taken by the top two in the government and nobody knows what these decisions are based on.

This is a recipe for disaster, as all Indians can see.