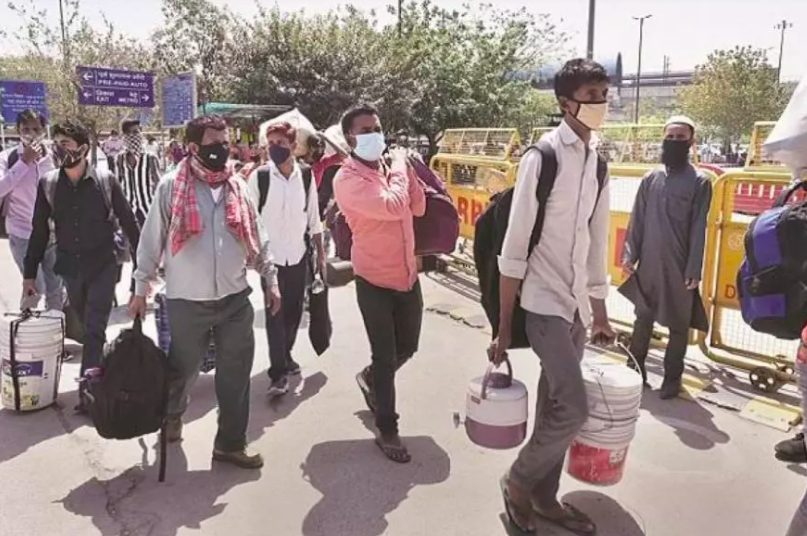 By the time the second wave of COVID-19 began in India, the migrant workers had nothing left – no money left, no work, no social protection or access to healthcare. While the Union government and the state governments’ ill-preparedness for the second wave of the pandemic wreaked havoc across all sections, but the workers from the informal sector were affected the most, according to a recent report by the Stranded Workers Action Network (SWAN).

The report highlighted the multiple dimensions of precarity experienced by migrant and informal workers during the second wave of the COVID-19 pandemic. The study found that the crisis was similar to that of the previous year in terms of dimensions of distress experienced, but also exceptional as it compounded the problems of the workers who had little to no savings and limited access to safety nets.

Through conversations with around 8,000 workers and their family members, SWAN recorded the limited availability of food and rations, lack of access to basic healthcare, low levels of income and earnings, increasing levels of indebtedness, the struggles of surviving in the city, and the additional set of concerns with returning to life in the villages.

The median daily wages of those who reached out was Rs 308. More than half of the people (57%) had less than two days’ rations left when they spoke with SWAN. Around 76% of the workers said that they had less than Rs 200 left with them when they reached out. Moreover, 34% of the workers were not paid their pending wages for completed work, while 13% of them were paid only partially. A massive 92% of workers said that they had not received any money from their employer once restrictions were imposed and work had stopped, and 56% of workers reported that their work had stopped for more than a month.

The report said, “For the poor, the last few months have been a kind of syndemic; a crisis of livelihood and hunger that has been compounded by the ubiquitous healthcare crisis that has paralysed the country. Images of hungry and tired migrant workers making long journeys home were at the forefront of public discourse in 2020. This year, however, the impact of the crisis on the economically vulnerable and marginalised sections has received considerably less attention. Undoubtedly the scourge of the second wave has been unparalleled; crippling the country’s health infrastructure and devastating communities and families.”

The report pointed out that the response of the central and state governments have been far from adequate and there has been little to no action taken to extend relief to migrant and informal sector workers.

It said, “The central government has deflected almost all responsibility towards the states, so much so that the judiciary has had to intervene. The Supreme Court, specifically, has taken an active role and issued orders directing states to introduce food security measures for migrant communities, including the distribution of dry rations via the Atma Nirbhar scheme (or any other state or central scheme) and the running of community kitchens for migrant workers.”

It added that in states where some measures have been announced, there is a continuing trend of half baked policy initiatives that either leave out or do not fully cater to the needs of migrant workers. Further, the state governments are also cash-strapped and have limited fiscal capacities to deal with economic and health challenges resulting from local lockdowns.

“It is essential that the GoI recognise the need for directed, equitable and dignified economic recovery for India’s workers and citizens,” the report said, urging the government to act immediately, following its constitutional obligations as well as global best practices.